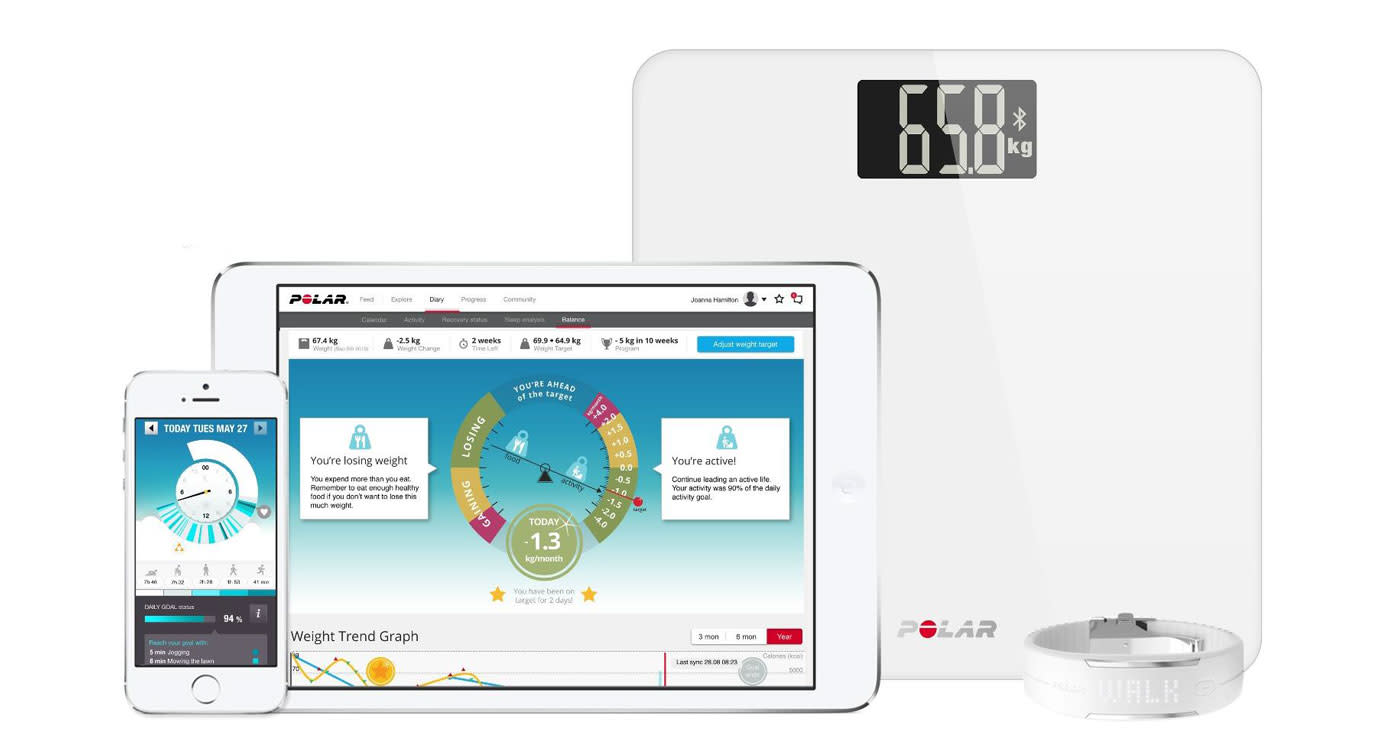 If you make fitness trackers, then you probably need to make weighing scales, or watch as Withings or Fitbit steals your customers away from you. It's a lesson that Polar now appreciates, and after a couple of years producing simple fitness trackers, it's turned up at CES with its first set of connected scales, Polar Balance. The firm describes the unit as a "weight management service," and promises that using it will help shift those pounds you gained during the holiday. According to the company, Balance is the missing component to complete its Jawbone-style weight loss coach. If you own a Polar Loop and are jacked in to Polar Flow, then your weight and activity data will be monitored in the cloud. Simply plumb in your desired weight-loss target and the app will provide customized feedback on how to shed the extra flab. If you're spending too much time on the couch, then Loop will remind you to get up and move around.

The one really promising aspect of this is the Weight Loss Speedometer, a diagram that'll tell you if you're really working towards your goals. Unfortunately, as pretty as that particular graphic might look, it's probably not going to be too persuasive when you've got a tupperware box of leftover mince pies close by. That said, if you're interested in pairing your Loop, M400 or V800 up to one of these, you can snag one now in black or white for $99.95. As for the A360 -- compatibility is coming in the very near future, but isn't ready for launch day.

Update: We just got a peek at the new Polar Balance, and it looks, well, very much like a regular scale. It's square and black and you can stand on it. It read our weight pretty promptly, though it didn't do too well on carpeted surfaces -- it often fluctuated depending on where we stood. A Polar spokesperson says it should do much better on regular non-carpeted floors.

Unlike the Fitbit Aria and the Withings scale, however, the Balance makes no pretensions that it measures body fat (which is why it was OK for us to stand on it with our shoes on). It's a little disappointing, but then the body fat measurements on those two other scales aren't always known to be accurate either. The key value of the Polar Balance here is that, as we said, it syncs up with your existing Polar activity tracker, which will then prompt the Polar software to recommend tips on how to keep your weight loss goals.

Nicole Lee and Aaron Souppouris contributed to this report

In this article: Balance, CES2016, Fitness, gadgetry, gadgets, gear, hands-on, internet, Loop, Polar, SmartScale, WeightLoss
All products recommended by Engadget are selected by our editorial team, independent of our parent company. Some of our stories include affiliate links. If you buy something through one of these links, we may earn an affiliate commission.