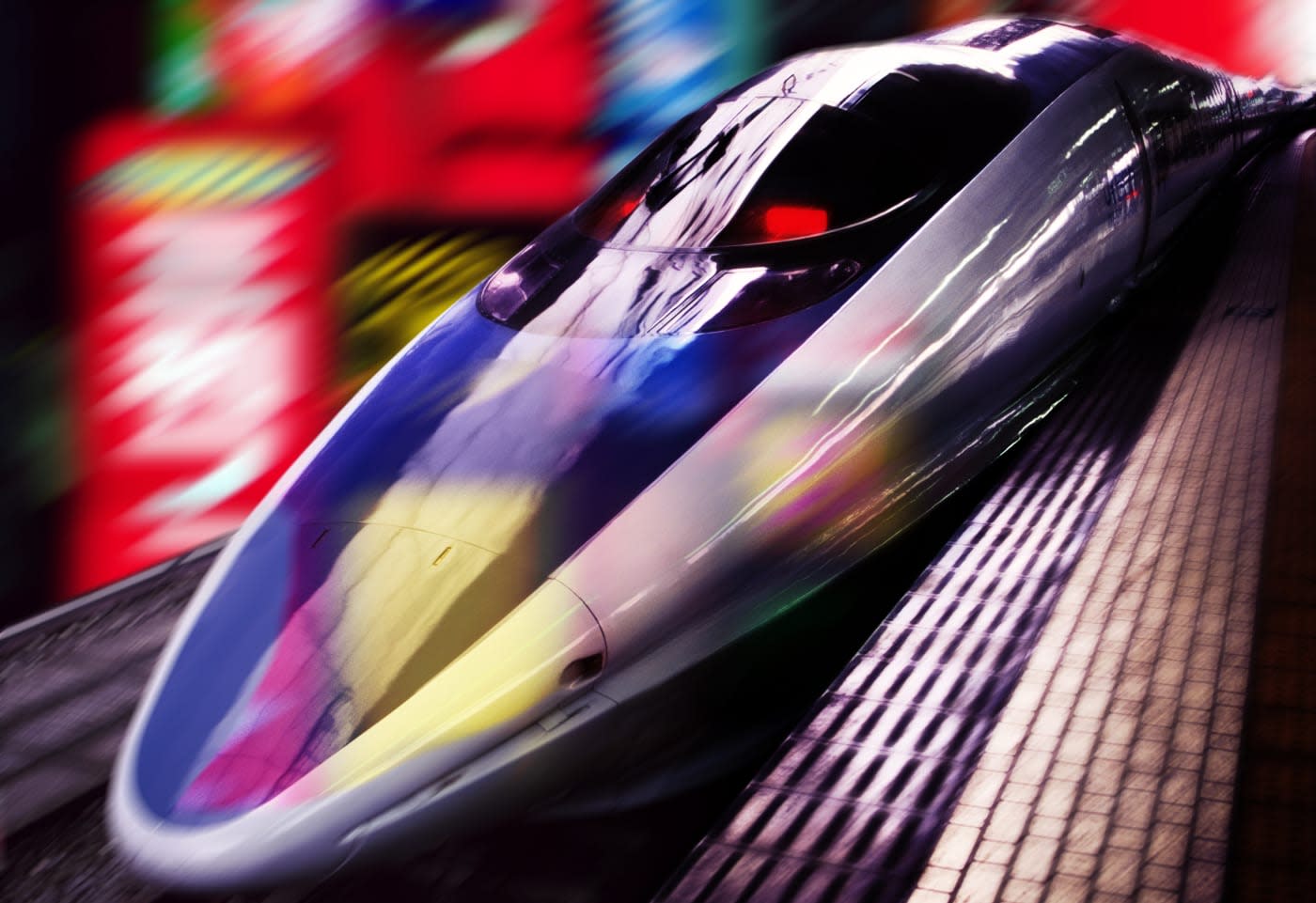 Snowfall causing train delays is nothing new. In the UK, where I'm from, this happens with hilarious, infuriating regularity. But last week, the first snow of 2016 brought Tokyo's central railway lines and Metro to a halt: hour-long delays between stations normally located minutes apart, packed platforms and a lot of complaints. That's because Japan's railway system typically works flawlessly, from the immaculately clean trains that service the distant southern isles of Japan to the experimental high-speed, floating maglev cars that might hit 372 miles per hour. If you love trains, you'll love Japan. And I just love them.

Let's start with that long-standing symbol of high-tech Japan: bullet trains or Shinkansen. Japan's first high-speed railway opened in 1964 and cut journeys between Tokyo and Osaka by two hours, down to four, making it as fast as air travel. (In Japan, low-cost airlines have only recently started to expand too, and many are now cheaper than a bullet train ride.) Even so, since its inception 5.6 billion people have ridden on the Tokaido between Tokyo and Osaka. To date, there hasn't been a single fatal accident involving passengers aboard a bullet train.

The nation's bullet train safety record is impressive, but this is even more so: The average delay of a bullet train trip along the entire Tokaido line is just 54 seconds, including disruptions due to natural disasters. When local (read: slower) Japan Rail trains are delayed over five minutes you can request a "delay certificate" to show your confused boss when you appear for your salaryman duties a little bit late. A whole lot of late notes were needed last Monday. Overnight snow battered some local Tokyo lines more than others. But, because it happens so very rarely, when Japan's railways do experience hiccups, they usually make the news, like when a computer control system problem affected 81,000 passengers back in 2011, for example. After the error, Japan Rail East issued a lengthy seven-page apology.

Tokyo's Metro system is also very, very popular. The annual ridership is double that of New York's subway, even though the latter runs on a 24-hour schedule. You can see where this is going: Rush hour is hell even without snow getting in the way. For what it's worth, at least, Japanese conventions and social rules keep the metro quiet. Hardly anyone eats or drinks on it, and I've never observed anyone playing music out of their smartphone. Nearly everyone uses contactless cards (or chips built into their phones) at the ticket gates, so getting in and out is swift and smooth. While citizens' own behavior certainly contributes to how pristine the cars look, that's only half the story. Watch a cleaning team polish off a bullet train in seven minutes — and remember that the average delay aboard the Shinkansen is under a minute.

Japan's like-clockwork train system might get half-explained away by the country's culture, but there's cold, hard efficiency at work too. As The Economist notes, the country's seven major railway companies own the land around their respective lines and rent it out. They also own the infrastructure, including stations, the tracks and the trains themselves. That makes for a more efficient system compared to countries where these parts are separately owned and operated.

Meanwhile, subway drivers are rigorously trained in a simulator that has, alongside 3D digital reproductions of the routes, the same controls, vibrations and "sense of movement" as real trains. In the Tokyo Metro itself, drivers cover the same lines again and again — gaining a creepy degree of affinity for the manual speed controls. If it takes one minute and 45 seconds to get between two stations, that's exactly how long the journey will take.

Japan's impressive safety track record (eye roll all you want, Dana) and pristine carriages don't touch on the curious place that trains hold in popular culture in Japan. Driving a train (or a truck) is apparently the fourth most-popular job among Japanese boys. Meanwhile, a cat is a ceremonial stationmaster at a distant Wakayama station. (RIP Tama, long live Nitama!) Back in urban hubs, there are station workers donning white gloves cramming more people into trains during rush hour, women-only cars to reduce groping incidents, an Evangelion-themed Shinkansen and even limited-run regional trains, like this one with a built-in foot bath: Central Japan Rail continues to work and test its faster, next-generation maglev bullet train. Even without hitting its current top speed of 372 mph, next-gen lines will still cut commuting times to Tokyo in half. It's scheduled to run in 2027, and tickets are likely to be even more expensive than the Shinkansen. Some experts suggest that it could be a very pricey mistake for the company, unless the railway tech gets picked up overseas.

Other countries are certainly interested in adding high-speed trains to ease congested roads, whether it's maglev-powered or not. California's high-speed rail project has already started, but Japan's companies are looking to other possibly locations, including a lucrative line between New York City and Washington DC. The UK is working on HS2, its own (troubled) high-speed rail network; France has its TGV; and China is testing and selling its own high-speed trains. Other countries have and will overcome the technical challenges of high-speed, but I doubt they can they best the reliability and quirks of Japan's train lines.