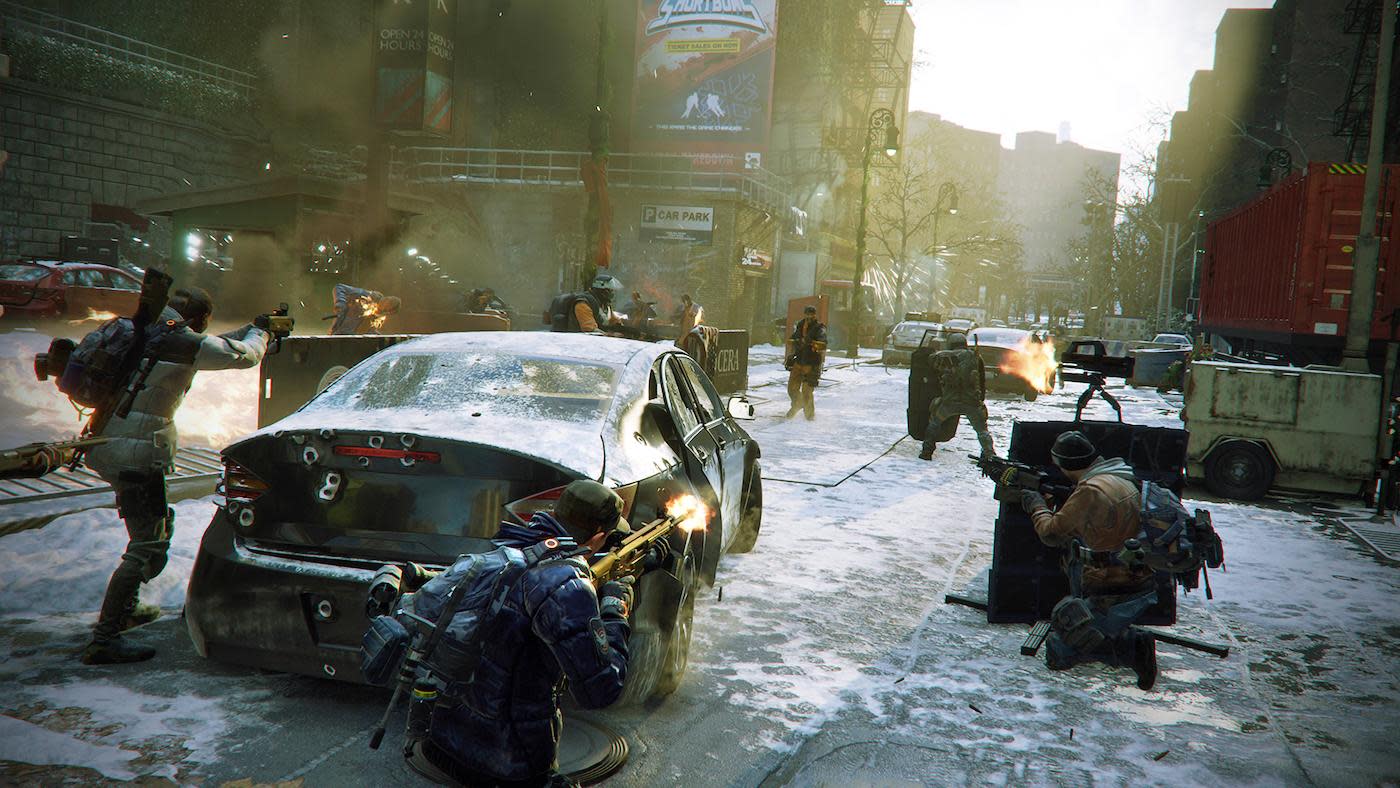 'The Division': Experience New York City as you never have before

Tom Clancy's new online-only game has the potential to be one of the best this year.

New York City's Flatiron District is pure chaos. As I peer around the corner of a skyscraper, automatic rifle in hand, all I see are abandoned cars and people shouting in the streets. I'm not alone, though: I'm with three comrades prepared to shoot anyone who seems to have bad intentions. But this isn't the Midtown Manhattan I know; it's a scene from Ubisoft's The Division, the new Tom Clancy game that's scheduled to release March 8th on PlayStation 4, Xbox One and PC.

For the unaware, the premise of The Division is that a smallpox pandemic spreads on Black Friday -- yes, that Black Friday -- starting with the Big Apple and sweeping its way through other cities across the country. Your character's job as a division agent is to stay where it began and, with orders from the president, keep society from crumbling to pieces. It won't be easy, however, since you'll have to fight those responsible for unleashing the virus. It's an interesting take on a third-person shooter, one we welcome with open arms -- especially considering how long we've had to wait for it.

The Division has been delayed multiple times since it was originally announced in 2013, first until 2014 and then again last year. Thankfully for gamers who have patiently waited for the title to launch, it looks like there's no turning back now. After hosting a closed beta this past weekend, Ubisoft invited a group of reporters to an event in New York City, a fitting setting for this particular game. I'm happy to tell you I walked away impressed, if not blown away -- so much so that I'm counting down the days until I get to play it again. The Division is as thrilling as you would expect an action game to be: shoot, reload, shoot, then sprint, then shoot again. While it's certainly reminiscent of Tom Clancy's Rainbow Six series, and the Call of Duty or Gears of War franchises, The Division also has a Watch Dogs feel to it. There are details such as 3D overlays, which guide you through the open-world in your quest to find new missions, that automatically made me think of Ubisoft's futuristic hacker title. But unlike Watch Dogs, the gameplay here is online-only, so don't expect local campaign or co-op modes.

That said, you can get through the main story solo or with help from your internet friends, be it on the PlayStation Network or Xbox Live. I played The Division on Xbox One and, although it took me a few minutes to figure out the controls, they're nothing complicated once you've completed a couple of missions. In other words, left trigger to aim, right trigger to shoot, one button for cover, another for melee. You know the drill. What I did notice is that it's relatively easy for your player to stay alive for long periods of time. As long as you find ways to shield yourself during battle, like using a car for cover, winning a battle without respawning shouldn't be a problem. Inside The Division's reality, there are several things to do. With the main missions (multiplayer or otherwise) your goal is to complete different tasks, including finding a missing person or rescuing a member of your team. You'll also find "Encounters," which are shootouts against adversaries, controlled by the artificial intelligence, that you'll come across as you're trying to get to your primary assignments. These are good for practice and an easy way to level up. The more points you gain, the more access you have to higher-end weapons and skills -- for example, you can use a mini turret instead of a grenade, and that's helpful when you need to keep your distance from people coming after you.

There are no laws here. It's a free-for-all, and not everyone who seems friendly is.

Another interesting feature is known as the Dark Zone. Here, you meet with other online players in a player-versus-player environment, but keep this in mind: There are no laws here. It's a free-for-all, and not everyone who seems friendly is. I learned this the hard way, after a crew of strangers randomly started shooting at my group. But hey, they seemed nice at first. "All the rules of engagement are off. It's an ambiguous PvP space, and that's a fancy way of saying that," says Ubisoft's creative director, Magnus Jansen, about the Dark Zone. "I see somebody and we can either just pass each other, ignore each other, [or] we can open fire and I can kill you and steal your stuff."

"Not to spoil too much, but there are certain division agents in the story that may be corrupted a bit by this tremendous power that you are given by the president," he adds. "So, for you as a player when you see another human player with gear that you want, and that you might be tempted to kill them for your own benefit, I'm really proud that we were able to expose your own greed in the Dark Zone."

When I asked Jansen about The Division's delays, he says, "it just took a lot of time to get it right," pointing to the open-world features of the game and the new engine that had to be built to create its impressive graphics. "It's a completely new gameplay concept that took a lot of iteration and developing," Jansen explains. "It was very difficult, in terms of project planning, to know when are we gonna be done to a sufficient level of quality with all of these new and risky endeavors."

"We're very, very happy that we got the opportunity [to wait], because sometimes when you do that they just say, 'Okay, release it even if it's crappy and buggy and whatever.'"

He went on to describe how some publishers launch games that simply aren't ready, something Ubisoft is guilty of as well (e.g., Assassin's Creed Unity). "We're very, very happy that we got the opportunity [to wait], because sometimes when you do that they just say, 'Okay, release it even if it's crappy and buggy and whatever,'" he says. "So we were just very fortunate that's not what happened, that we were given the time to do all the iterations, get everything right, get the graphics, get the frame rate, get the balance, get the online solutions, so that it is as smooth, as awesome as I think it is."

As for whether you'll be able to explore beyond Manhattan, Jansen says we'll have to wait and see. Doesn't sound too promising, if you ask me.