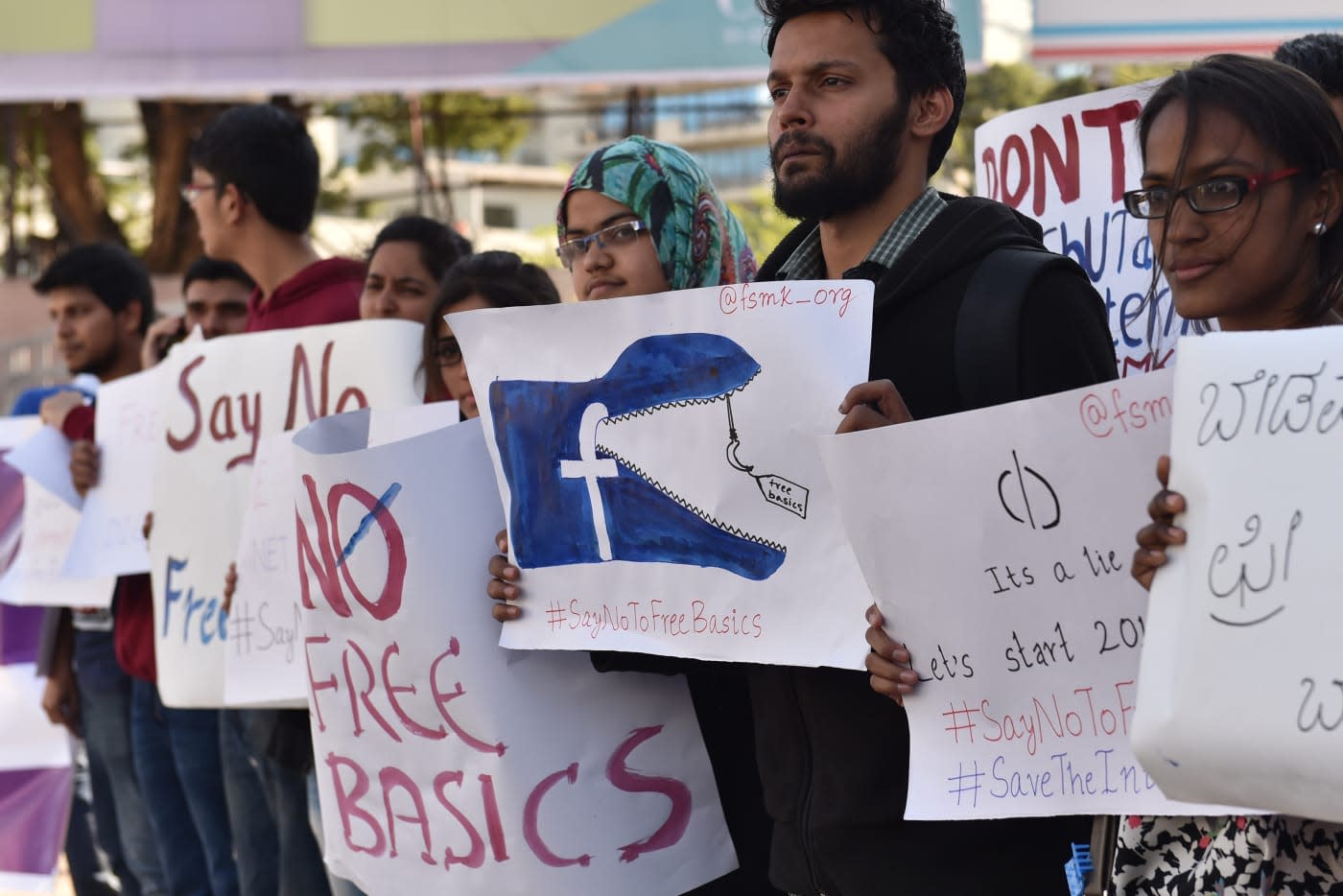 Net neutrality one, Facebook zero. India's telecommunications regulator has banned what it calls "discriminatory tariffs for data services," more commonly known as zero-rating. The term describes schemes that allow customers to access particular sites or services for "free," or without eating into their monthly data cap. Facebook has been offering such a deal through its Free Basics (formerly called internet.org) platform, which includes local news, weather, Wikipedia and, of course, Facebook.

Critics believe that zero-rating goes against the principles of net neutrality -- the idea that all content on the internet should be treated equally. Usually, that means banning ISPs from selling so-called "fast-lanes" to companies that operate online. Zero rating, however, can be quite attractive to customers (it's "free" access, after all) but the worry is that such tactics discourage competition and suffocate superior startups.

India's regulator called on Reliance Communications, Facebook's Indian telecom partner, to stop Free Basics last December. The move put Facebook on the defensive; to counter the negativity, the company has reportedly spent millions on new advertising and had an op-ed by CEO Mark Zuckerberg published in The Times of India. In the piece, he compared Free Basics to a public library, suggesting that its limited offerings are still beneficial to society. It seems those efforts were ultimately in vain, however. The rules handed down today weren't aimed at Facebook specifically, but they almost certainly cover Free Basics:

"TSPs (telecom service providers) are prohibited from offering different tariffs based on the content, service, application or other data that a user is accessing or transmitting on the internet. Tariff for data services cannot vary on the basis of the website/ application/ platform or type of content being accessed. For example, a consumer cannot be charged differently based on whether she is browsing social media site A or B, or on whether she is watching streaming videos or shopping on the internet."

The decision follows a similar shutdown in Egypt. A spokesperson for Facebook said: "Our goal with Free Basics is to bring more people online with an open, non-exclusive and free platform. While disappointed with the outcome, we will continue our efforts to eliminate barriers and give the unconnected an easier path to the internet and the opportunities it brings."
In this article: culture, facebook, internet, services
All products recommended by Engadget are selected by our editorial team, independent of our parent company. Some of our stories include affiliate links. If you buy something through one of these links, we may earn an affiliate commission.