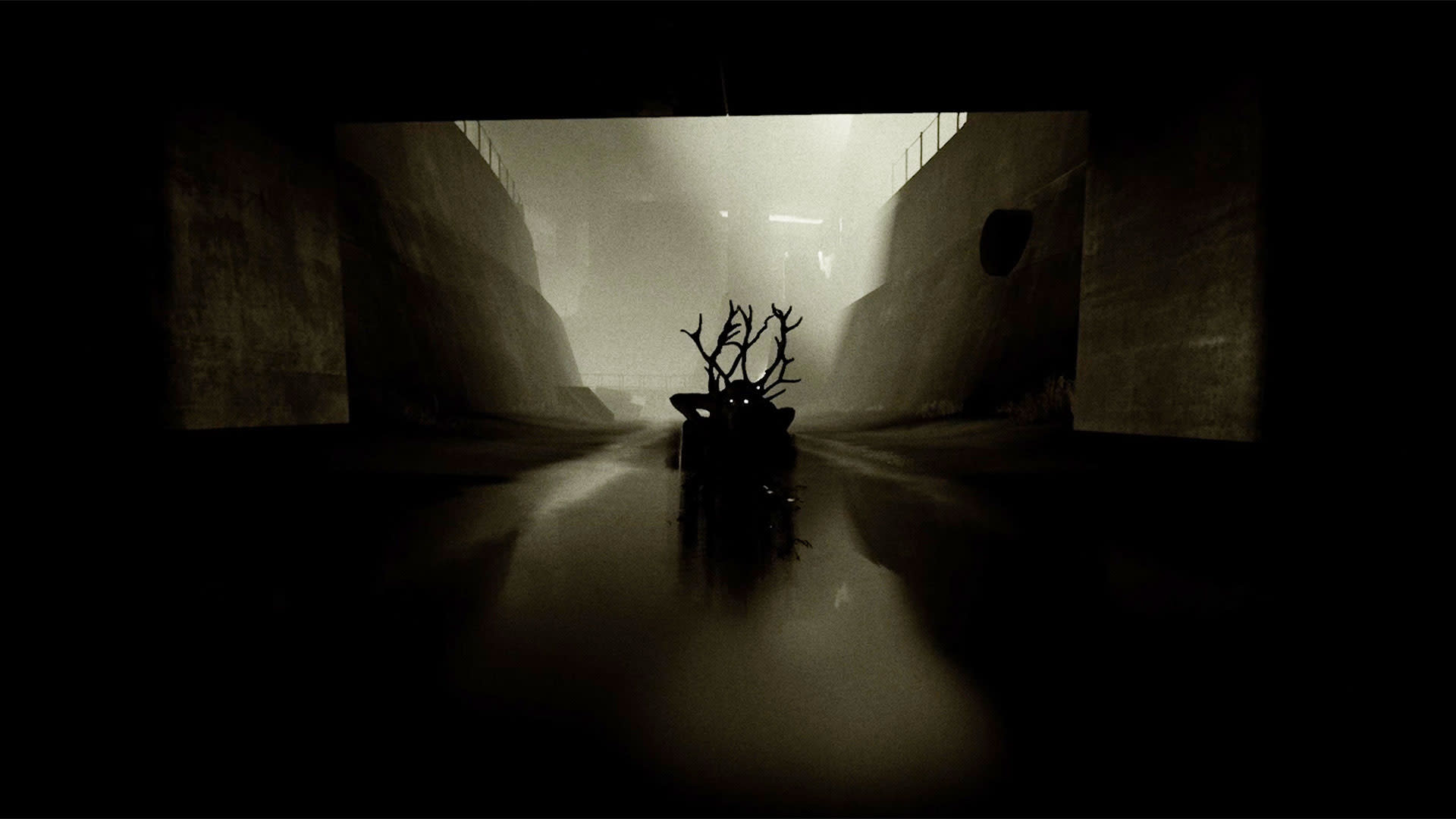 The advantage that horror video games have over movies is that you're an active participant in what's happening; you make what happens onscreen that much scarier. But playing these games in virtual reality instead of a 2-D screen is a different proposition: The display is on your face, and in the case of PlayStation VR, costs $400. Ripping the headset off and reflexively throwing it to the ground out of fright is going to be a very expensive mistake. That's why the team at Tangentlemen is taking a different approach for Here They Lie, a psychological thriller drawing from directors Stanley Kubrick and Terry Gilliam, and films like It Follows and Jacob's Ladder for inspiration.

In the PlayStation-exclusive Here They Lie, everything moves at a very deliberate pace. From the creepy, masked humanoid creature that shadowed me, to the speed I moved through a subway station and the hammerhead sharks that swam through the air (yeah, the game gets weird), everything moved at a leisurely pace. Unlike Resident Evil VII, which occupied the demo station immediately next to it and gave two of my co-workers severe motion sickness, Here They Lie feels like a native VR game even though it'll also be playable without a headset.

Art Director Rich Smith said the main difference between a VR game and a traditional one is that the camera can be doing anything. That means developers have to employ periphery elements like spatial audio and lighting design to ensure the player sees exactly what they're intended to. Then they combine it with the medium's inherent sense of immersion to amp up the creepy factor. "That's the way you structure a horror experience that still feels like you have agency, and that you can go anywhere and see anything," Smith said.

During my brief demo, a subway station went from dingy and dirty to me wading through an ankle-deep pool of blood toward a door. That immediately drew the infamous tide of blood erupting from the elevators in The Shining to mind. As soon as I reached the door, it shifted ahead, forcing me to reluctantly keep trudging forward. The next time I reached for the doorknob, it shifted again. Earlier, before the blood took over, I found myself walking backward down a flight of stairs to keep an eye on the vaguely human creature following me before it disappeared just out of sight.

A feeling of present danger pervades everything, and yet nothing was an imminent threat. When the demo ended with the game's twisted, fiery "big bad" enemy grabbing hold of me, I was extremely unsettled, but not scared. He didn't jump out of a dark corner; crouching under the low ceiling, he slowly stalked toward me on an unnaturally long pair of legs and I was helpless to stop him. I felt like I was playing through a nightmare.

That comes from the team's cinematic inspirations. "There's a kind of dread involved in [It Follows] that's different than slasher horror," Smith said. "We're definitely looking more at the kind of Kubrick vein of horror. What he did in [The Shining] is about building a mood and setting a tone. And when you do hit [players] hard with a scare, it has a little bit more weight."

What Here They Lie does so well is it builds an atmosphere and feelings of unease by taking recognizable bits from our world (like the hammerhead sharks) and twisting them in ways that don't add up (like them swimming above my head in a subway tunnel). It creates an overall sense of uncertainty and fear in indirect ways rather than lazily signposting the emotions with piles of rotting bodies or a few jump scares.

Smith said this is a strong, direct inspiration from the 1990 cult movie Jacob's Ladder.

In that film, Vietnam War veteran Jacob Singer (Tim Robbins) sees all manner of horrific imagery, such as someone asleep on a train who quickly curls a bloody tail into his trench-coat, and a nurse with a set of ghastly, diminutive horns under her uniform hat. During Singer's time in the war, the government administered a drug that made soldiers hyperviolent and more effective killers. The side effects aren't pleasant at all.

"You really don't know what [Jacob's] deal is. Is it all a hallucination? Is he in hell? Even all the way to the end of the movie, it's intentionally ambiguous," Smith said. "That's what we're grabbing at as well: The kind of ambiguity where parts of the game are recognizable, where you can see figures and locations you recognize from real life, but they're not quite right and they don't stitch together the way you want them to." As for why you're enduring these horrors, Smith was intentionally vague about the game's overarching story. You're chasing after a woman in a yellow jacket and you'll have to rely on other characters to fill in the blanks for you, but that's about all Smith revealed. How you learn about the protagonist is from other characters, who know more about you than you know yourself. "You're thrown into this space where, almost [Terry] Gilliam-style, you don't know where your stance is in relation to the world you're in," he revealed.

There are morally ambiguous choices to make regarding these characters, and by story's end you're complicit in how the narrative plays out. "The game persistently asks questions, and in the end, it asks the player a particular question based on their experience throughout. That decision is pivotal to the experience."

Of all the games launching with PlayStation VR this October 13th, Here They Lie looks like the one that'll take advantage both of the format and the Halloween season.

In this article: av, e3, e32016, gaming, heretheylie, horror, jacobsladder, playstation, playstation4, playstationvr, ps4, psvr, richsmith, sony, tangentlemen, theshining, virtualreality, vr
All products recommended by Engadget are selected by our editorial team, independent of our parent company. Some of our stories include affiliate links. If you buy something through one of these links, we may earn an affiliate commission.