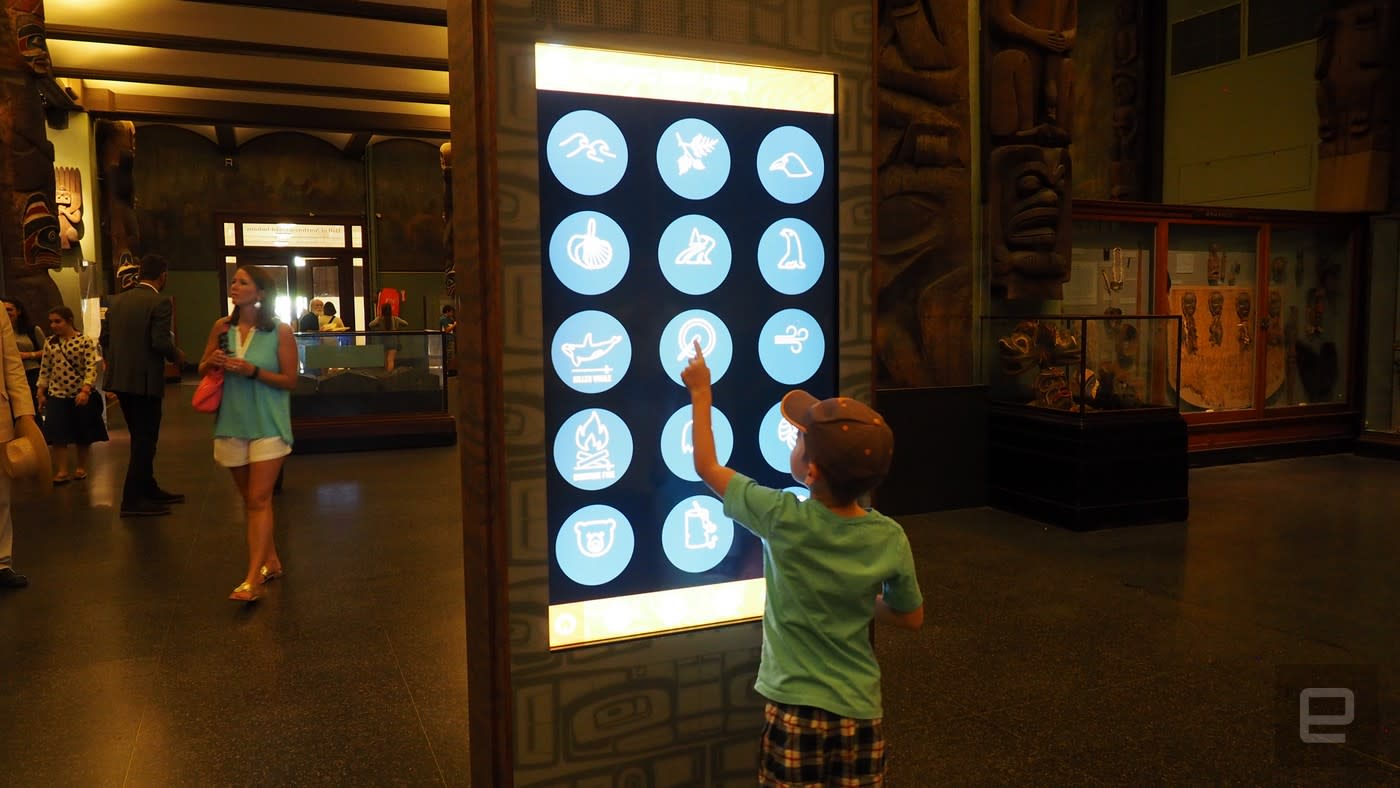 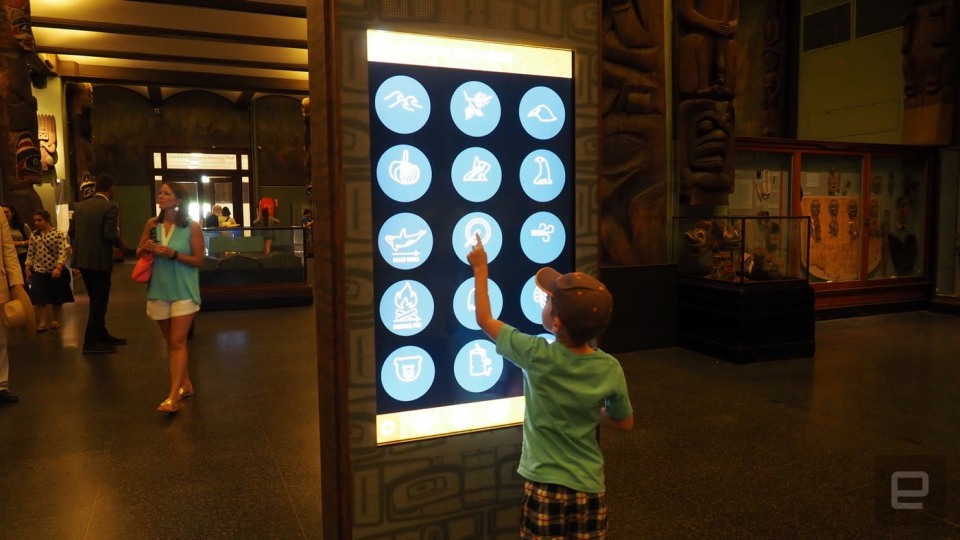 Museums, for all the wonders they contain, have a reputation for being staid and musty. At their worst they've even been described as mausoleums. That's a problem when it comes to exhibits about an active, living culture like the Haida people of British Columbia. The American Museum of Natural History has taken it upon itself to change that perception of the native groups of the Pacific Northwest, implementing new technologies in its oldest hall to educate millions of visitors about these thousands of people living on the other side of the continent. It's easy to think of the cultures portrayed in the AMNH as being firmly in the past. That's because the museum itself is a relic, with many exhibits having remained unchanged for decades. The Hall of Northwest Coast Indians, the oldest extant gallery of the museum, opened in 1900 and showcases a variety of artifacts from tribes such as the Kwakwaka'wakw, the Tlingit and the Tsimshian. The scent of old wood is strong in the room, and it's kept dark in order to protect the items housed inside the antique glass cases. It's not exactly the friendliest hall, which means it's not uncommon for visitors to pass through quickly on their way to brighter, more exciting displays.

It became clear that the room was in need of revitalizing when the museum began to receive complaints from First Nation tourists. But the hall's historic nature and the cost of renovating it made any kind of extensive redesign impossible. The museum opted instead for a lighter, more technological approach -- something that could work around and respect the facility's historic architecture. The centerpiece of this initiative is the "digital totem," an interactive monolith that sits in the middle of the hall. It doesn't resemble a traditional-looking totem pole so much as those giant kiosks that made their debut in New York's subway system a few years back. And that's fine: According to curator Peter Whiteley, "totem" is an Ojibwe word that white settlers took from the east and applied to the native sculptures they found in the Pacific Northwest. It doesn't have strong cultural significance for the cultures portrayed in the gallery.

However, if you're looking at it as a source of information about a tribe, the digital totem in the Hall of Northwest Coast Indians has plenty of stories to tell. Each side of the totem is occupied by a large touchscreen, with the home page displaying a map of the northwest region and a series of icons depicting the various topics the various topics a visitor can explore. They can learn more about particular First Nations individuals the museum interviewed, including artisans, educators and linguists. Or they can play with audio common to the area, mixing and matching sounds like the cry of an eagle with drum beats and rattles to create a unique beat. Most relevant to the hall itself is the ability to zero in on particular artifacts, rotating them and zooming in to examine the fine details that visitors often miss because these objects spend their days behind glass in a dark corner of a case. There's a lot to do on the totem, which carries the risk of visitors spending too much time there, at the expense of other parts of the hall. So the totem isn't the only piece of tech the AMNH has introduced to further engage visitors. Once a month, an employee of the Haida Gwaii Museum will virtually wander the hall using a telepresence robot, approaching groups to help educate them about the displays they might be looking at and answer any questions they have. There's also a mobile app with some AR functionality: Children color in worksheets depicting artifacts like a bird mask and, when the camera is pointed at the sheet, the app will display a 3D representation of the mask, complete with all the colors and scribbles added by the child. The AR feature and the Hall of Northwest Coast Indians are merely the tip of the iceberg for the AMNH's Explorer app. Although still in beta, the app is filled with features intended to enhance your visit to the museum, like ticket sales and exhibit information. There are maps -- but instead of a static image for you to puzzle out, the app uses Bluetooth to connect to beacons throughout the museum, marking your location on the diagram. It then populates with bubbles representing notable artifacts in the room, which you can then tap on for more info, along with directions to that spot in the room. Digital architecture director Matthew Tarr worried that visitors might be overwhelmed by the sheer amount of information, but instead staff found that people browsed it like they use Instagram, scrolling through images and "liking" the ones that intrigued them the most. The app has a bookmark feature so visitors can revisit the parts of the museum they enjoyed even after they leave.

Lots of museums have experimented with technology to further engage the public, and the American Museum of Natural History will continue to push forward on that front. The staff hopes to expand projects like the digital totem into other areas of the museum, increase the amount of artifacts available to look at the in the app and experiment with other technologies as well. In the end it's all about making connections: bringing the museum closer to its visitors, joining people in New York to living cultures all across the world and also bridging a museum founded in the 19th century to the 21st.
In this article: AMNH, art, culture, design, FirstNations, Haida, museum, museums, NativeAmericans, naturalhistorymuseum, NewYork, NewYorkCity, NYC, PNW, Tlingit, Tsimshian
All products recommended by Engadget are selected by our editorial team, independent of our parent company. Some of our stories include affiliate links. If you buy something through one of these links, we may earn an affiliate commission.