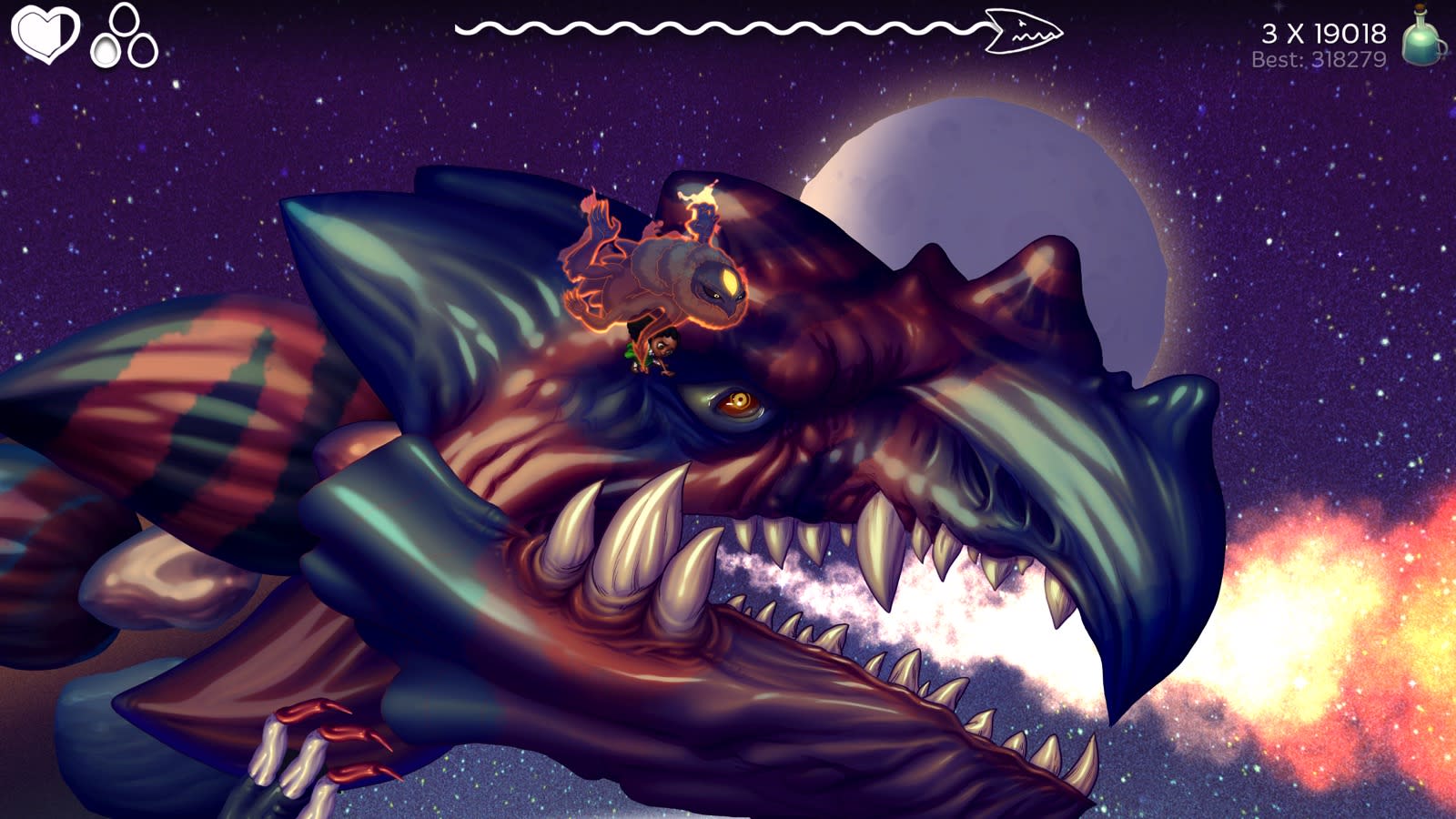 The next great indie game is about the dragon apocalypse

'I feel like I’m on the verge of being able to create a timeless piece of art,' says 'EarthNight' creator Rich Siegel.

There's no such thing as an "overnight success." Sure, some folks get lucky with a snappy catchphrase or a $30 Chewbacca mask and they experience a wave of sudden, unplanned popularity, but generally, people don't achieve their dreams over the course of a single evening.

Rich Siegel is living proof of this myth. He's an independent game developer who's been quietly working on his dream title, EarthNight, for years. It's a beautiful, hand-painted platformer about the dragon apocalypse. Players careen across the backs of massive, snake-like dragons as they soar high above the planet, all while an original chiptune soundtrack pounds away in the background.

EarthNight has received some scattered press, but it's not a household name. When it finally lands on PlayStation 4 and PC, it will probably be a surprise to most people, another indie game in a sea of new releases.

However, there's something special about EarthNight. It has all the trappings of a sleeper hit: It's gorgeous, unique and whimsical, and it feels fresh even as it embodies the nostalgia of classic platformers. It has built-in Twitch streaming capabilities, it's a blast to watch and it features permadeath, which means once players die, they have to start the entire game over. EarthNight inherently caters to competitive people and repeat plays. If any indie game is going to be an "overnight success" in 2017, this is it.

However, Siegel does have experience with fairly big companies. He's 31, and for the past eight years he owned his own business in Philadelphia, Main Line Delivery, which brought food from high-end restaurants straight to people's doors. In 2014, when he was still in his 20s, Siegel employed about 90 people.

Four years ago, he started working on EarthNight in the evenings and on weekends. It became his passion. So, in December, he sold Main Line Delivery to Caviar.

"Now I'm going to be funded to finish EarthNight, and actually have the time to truly focus and finish it right," he says.

This is important to Siegel -- getting EarthNight right. It's not only for himself and his own vision; Siegel is working with renowned chiptune musician Paul Weinstein, who goes by the moniker Chipocrite, and accomplished artist Paul Davey, otherwise known as Mattahan.

Siegel started following Davey on DeviantArt 15 years ago, when Davey was creating custom icon packs for PC and Mac, including the massively popular Buuf theme for iOS.

"I didn't know at the time that he was 11 when I started following him," Siegel recalls.

Over the years, Davey and Siegel teamed up on a few smaller projects, such as the BeardWars and PuppyWars apps. When Weinstein (the other, more musical Paul) and Siegel sat down four years ago to dream up their ideal game, they knew which artist they wanted to use.

"He was born with it," Siegel says. "He grew up in Jamaica, in the middle of nowhere. I have a canvas painting in my house he did when he was 14 -- it's better than I'll ever be able to do in my whole life, than any of us will be able to do in our whole lives." "The Only Providers" by Mattahan

Siegel is in awe of Davey's art. He thinks Davey is a genius, and his work certainly speaks for itself: His portraits are infused with a glowing, soft light and fantastical settings. Giants, trolls, dragons and vicious bears surround images of women and families as they navigate cities, forests and the cosmos.

"The style of the game is just his art style," he says. "It's just how he paints."

Siegel compares Davey to Johannes Vermeer, one of the greatest painters of the 1600s and the artist behind Girl with a Pearl Earring. Vermeer is known for the way he depicted light, though it's recently been suggested that he used a camera obscura -- a primitive kind of projection technique -- to frame his paintings. Essentially, he traced projected images onto a canvas, according to a handful of academics and entrepreneurs.

Siegel argues that Davey captures light in a way that Vermeer only wished he could. "Obviously he's worked at his skill," he says. "He works real hard, he's cultivated it. But he can do what the most famous artist in the world was trying to do."

EarthNight takes full advantage of Davey's talent: It's a hand-painted game, meaning its creatures and settings are detailed and decadent. However, there's a reason most games aren't hand-painted -- it takes an immense amount of work. There are two main characters in EarthNight, and each one is about 350 frames alone, and then there are hordes of enemies, the dragons themselves and all of the backgrounds to configure.

The game itself uses a technique that Siegel calls "hand-designed procedural generation." Every dragon (meaning every level) has 125 ways of playing out. As Siegel explains it, the second dragon has 125 squared possible variations to pull from, the third has 125 cubed variations, and so on. The final game features 360 pieces that Siegel programmed himself, but they can be combined in about 18 quadrillion ways -- all of them hand-painted.

"I'm really hoping that we can break through and he can really get the recognition that he deserves, because I have seen a lot of artists and I have never been so impressed," he says. Davey helped infuse the game with effortlessly unique art in a few ways. Not only is EarthNight hand-painted, but it stars two black characters, Sydney and Stanley. It's still uncommon to find video games with a non-white, non-male protagonist, despite a few years of public discussion about the realities of industry diversity.

Davey is Jamaican, though he lives in Philadelphia now. Sydney, EarthNight's young female character, is based on his little sister, and Stanley is a tweaked version of one of the BeardWars icons. Both protagonists are natural extensions of Davey's own life and experiences.

When Siegel, Weinstein and Davey were building the game in obscurity, they didn't give the character designs a second thought. But now that EarthNight has been featured at a few conventions and on the PlayStation blog, Siegel says he's had to think about issues of race and diversity in video games -- and he's happy with EarthNight's place in the conversation.

"Especially where the country is right now, it's like, what can we do except express diversity in art? I think that's important," he says. "And, honestly, it wasn't an intentional decision. It was just like: These are the characters. But now that it's happening, I'm super-proud to say, yes, our game stars a female black protagonist -- and she's the cooler one."

Siegel hopes that as many people as possible play EarthNight once it comes out. Indeed, that's one reason he's building Twitch streaming into the PS4 version, and he plans to eventually release it for PC, Mac, Vita, iOS and Android. He wants people to play, watch and dissect EarthNight just like they do with any popular game. Spelunky, for example, became a massive hit (some might even be tempted to call it an overnight success) in 2012, and fans ended up combing through its code in order to uncover all of its hidden treasures. EarthNight, Siegel says, is similarly brimming with secrets. "There's a lot that I'm never going to talk about," he says. However, Siegel hopes that he'll have a fanbase so dedicated that he won't have to actively spoil anything: "Collectively, the world's going to find everything. I just can't wait for that."

Siegel hasn't locked down a release date for EarthNight, but without a company to run, he plans to have it on PlayStation 4 and Vita by late 2017, with PC and Mac versions soon after. That means he's just one year away from achieving his dream; it means he'll be five years into the creation of his overnight success.

"If I could go back and tell my five-year-old self that I'm making a video game that's going to be on a console, he wouldn't believe me," he says. "And there's so much love that comes from people who play it. ... That joy is certainly worth it. And that's part of why I guess I'm not done yet. I've come so far. I feel like I'm on the verge of being able to create a timeless piece of art. My first thing that will outlive me and be here forever."