Despite rapper beefs being an unofficial feature of Twitter practically since it launched, this week alone has taken things to a new level. Less than 24 hours after Neil deGrasse-Tyson tangled with B.o.B over (of all things) whether or not the Earth is round, Kanye West decided to call out Wiz Khalifa over criticizing the title of his upcoming album and his usage of "kk." ( Hit the link for a recap, but if you missed it: Kanye decided the letters were a shot at his wife when Wiz was just pushing his own Khalifa Kush. Things have now been settled after intervention by their ex-in-common Amber Rose.)

At turns hilarious ("I went to look at your twitter and you were wearing cool pants ... #Wizwearscoolpants"); dismissive ("You have distracted from my creative process"); and incredibly disappointing ("you let a stripper trap you"); it was a moment that not only belongs on Twitter, it belongs to Twitter. It's time to embrace that.

For years, I've seen Twitter positioned as something that goes along with. Over the years services, apps and platforms have come and gone based on the idea of hosting conversations along with whatever is being broadcast. Livetweeting of events will never go away, and while that's the kind of thing that can make watching TV better, it doesn't especially enhance Twitter itself, or give the masses a reason to check it out. Instead, Twitter is at its best when it's hosting the show, and there's nothing between us and the insanity, inspiration or entertainment on the other end. The most essential conversation is what causes Neil deGrasse-Tyson to go on late night TV and drop knowledge about physics, not just the commentary during that appearance.

"Listen, B.o.B, once and for all. The Earth looks flat because: 1) You're not far enough away at your size, and 2) Your size isn't large enough relative to Earth to notice any curvature at all." -- Neil deGrasse Tyson ► Neil deGrasse Tyson responds to rapper B.o.B's claim that the Earth is flat: http://on.cc.com/1Pl1kbm

As Mashable's Christina Warren put it, this was a moment "that can only happen on Twitter." Appropriately, Twitter has moved to capitalize on its position at the center of real-time conversation with the feature called Moments, but it's focusing on the wrong people. If I post on Twitter, I don't really need Moments to organize the stream for me at all, and I definitely don't need Twitter moving buttons around or adjusting the order of tweets. The people who need help keeping up are the folks who aren't already on Twitter, or who peeked in and quickly abandoned its fast-flowing information stream.

@paulg the real question is why does a startup become part of YC any more ? The good old days of YC are just that

Whether its Kanye vs. Wiz, B.o.B. vs. NdT, Paul Carr vs. Mark Cuban or J.K. Rowling vs some random politician, this is better and more interactive than any TV show. Focus on that. What it needs is an app -- not in the main Twitter app itself -- that keys in on the data like this graph showing the conversations about Kanye West.

You plug in some info about what you're interested in, and when it starts to spike on Twitter you get an alert. No one should have to live without knowing when Steph Curry is going on a hot streak, when the Crying Jordan face photoshops have claimed their latest victim, or why anyone is waiting to find out when Justine lands.

I don't see irrelevance as a potential issue for Twitter; years after its debut it remains the best and really only place to monitor what's going on nearly anywhere in the world, with little or no delay. Far from just a place to experience the trashy thrill of reality TV, it's become the meeting spot for those seeking to push for change either in their own lives or across larger groups. In 2009 Kanye said "everything that Twitter offers I need less of" -- and while this week's events prove he's probably right about that, our reactions show the rest of us are looking for more, if Twitter can provide it. 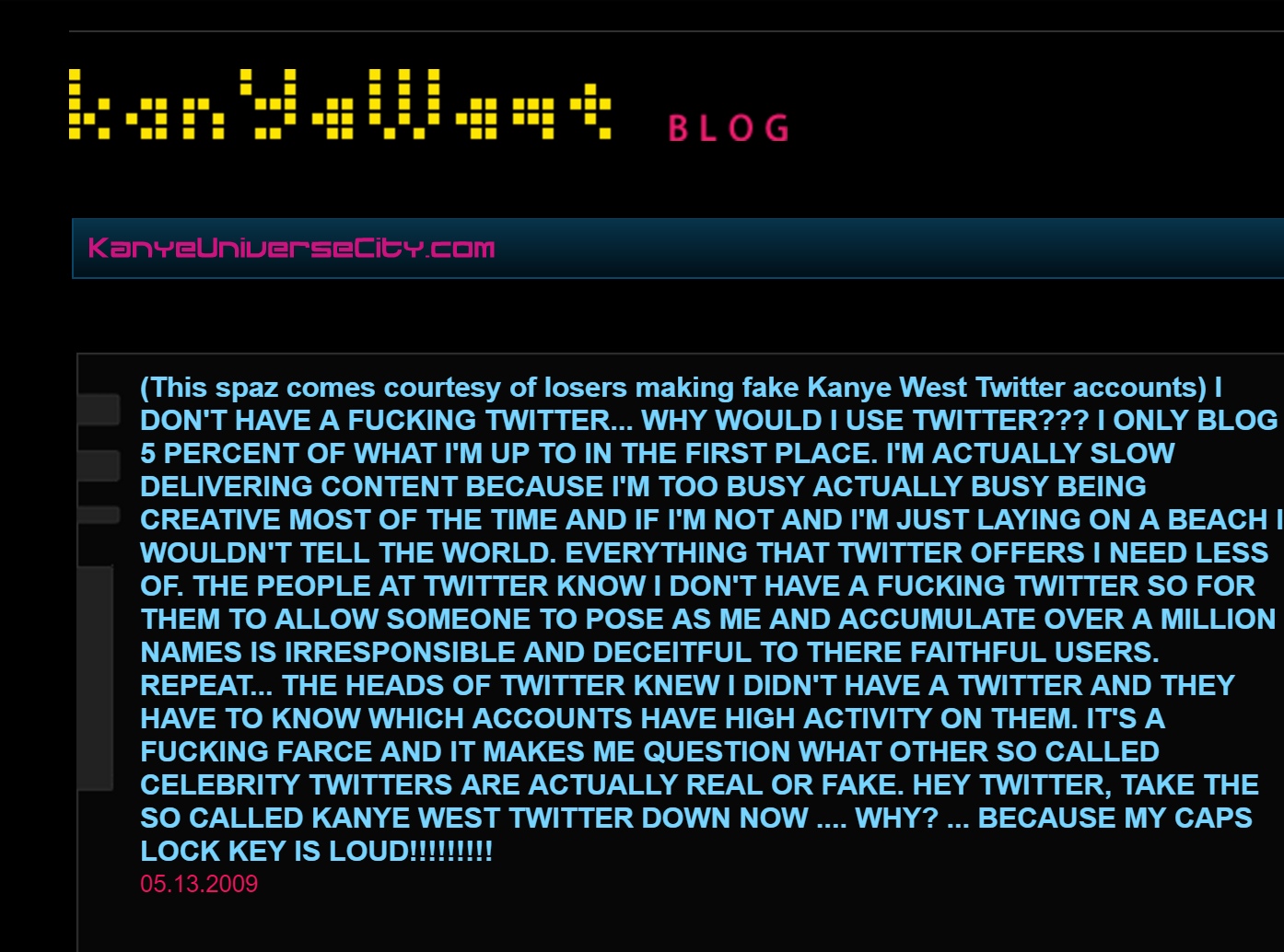 In this article: beef, culture, editorial, internet, JkRowling, KanyeWest, MarkCuban, NeilDegrasseTyson, realityTV, Twitter, video, WizKhalifa
All products recommended by Engadget are selected by our editorial team, independent of our parent company. Some of our stories include affiliate links. If you buy something through one of these links, we may earn an affiliate commission.