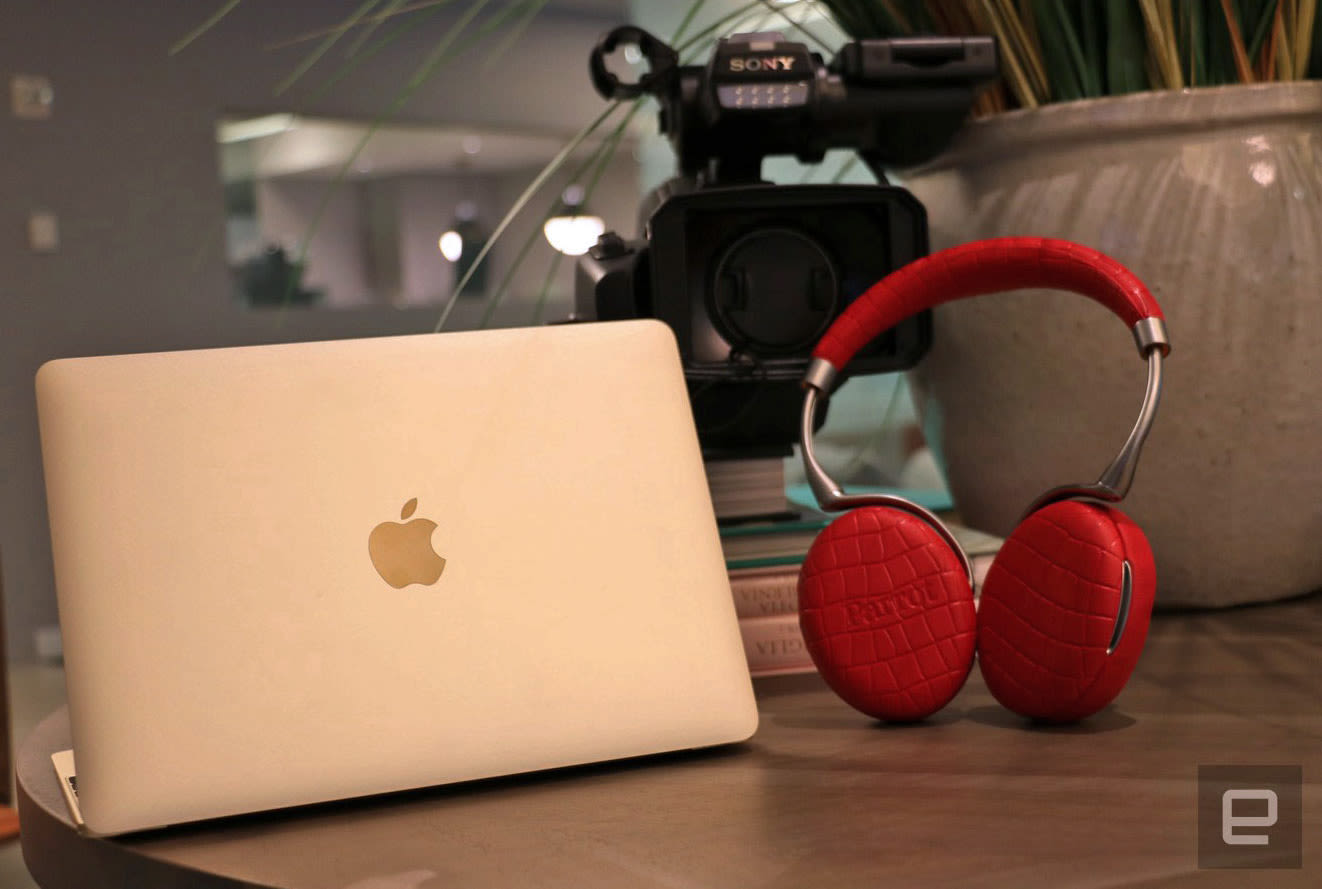 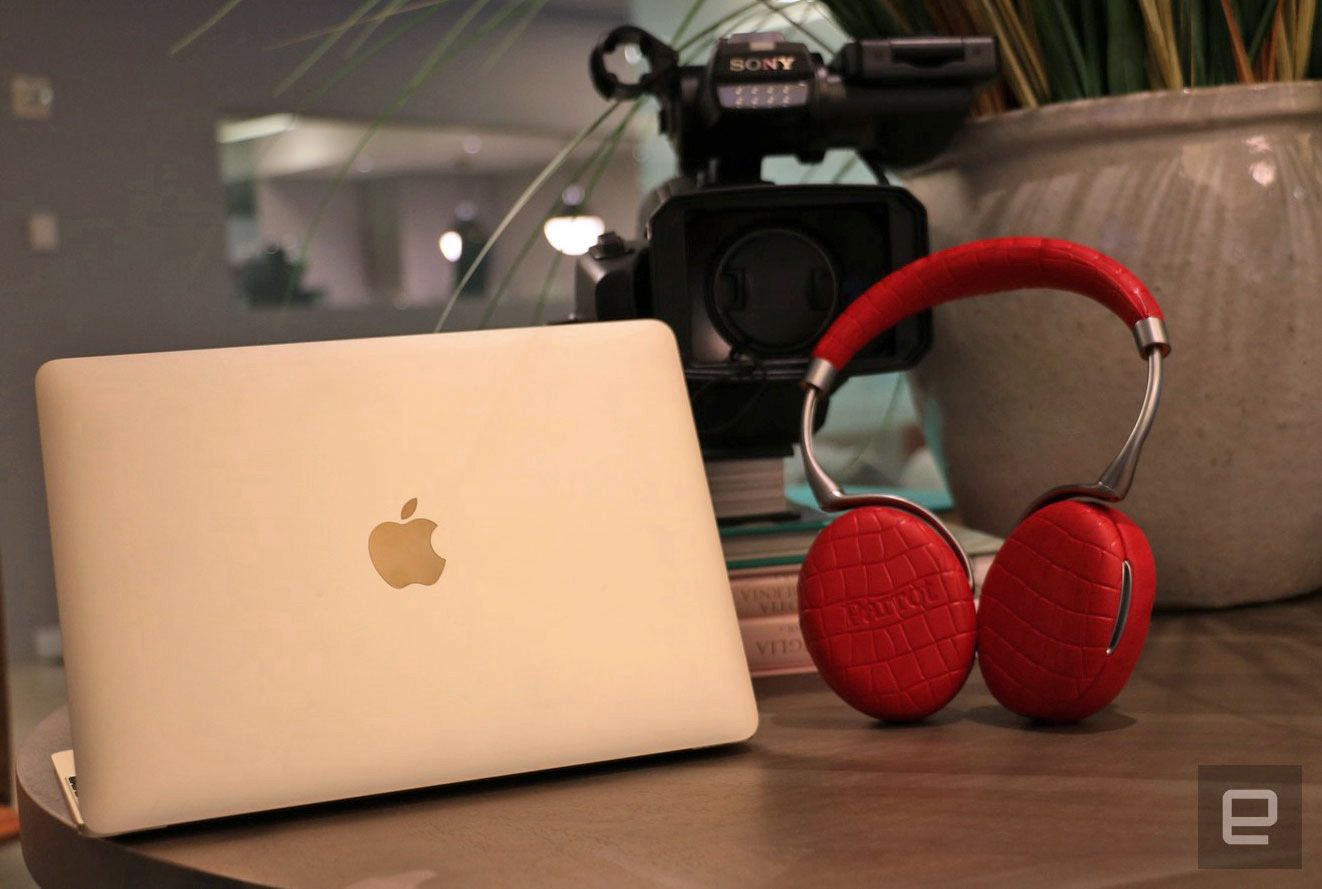 Add one more monthly expense to my budget. Just kidding, I don't have a budget. (I'm not very fiscally responsible.) But whether you're financially cavalier or a careful spender, Grover's recent arrival in the US is good news. The company lets you rent consumer electronics at an affordable monthly fee (compared to full retail prices, at least) 30 percent of what you pay going toward your purchase of the device, should you eventually choose to buy it. I tried out the service (only available in NYC for now) and, much to my surprise, am having a hard time not handing my entire wallet over.

Grover is not the first to offer device rental. Notable competitors include Lumoid, which allows shorter durations and has a smaller selection, and the now-defunct YBuy. The latter let people get products sent to them for $25 a month, and subscribers had to return the devices after each month or choose to buy them. But YBuy appears to have disappeared since its successful 2012 funding; its website doesn't exist anymore, and there doesn't appear to be news as to why it closed. Former YBuy CEO Stephen Svajian did not respond to a request for comment.

As a gadget reviewer, I'm blessed to get to spend time with a ton of cool devices at work. So I thought Grover wouldn't appeal to me. I could see it tempting my tech-savvy friends, who often ask me about my experience with the latest phone or hot new camera, but I believed I wouldn't be moved.

How wrong I was. The site has 13 categories including cameras, MacBooks, phones, gaming and drones, each of which contains dozens of devices for loan. They weren't outdated either, and you'll typically find the latest in laptops, smartphones and wearables as soon as they hit the market. As of this writing, the phone selection includes Samsung's Galaxy S7, S7 Edge and S7 Active, Apple's iPhone 6s and iPhone SE, as well as Google's Nexus 6P. Some categories weren't as well-stocked, such as the virtual reality section, which only included the Gear VR (sorry, HTC Vive or Oculus fans). The drone category, meanwhile, lacks the DJI Phantom 4 (you can get the Phantom 3, though). Even so, within 10 minutes I had close to 20 tabs open. I've never tried Rent the Runway or Bag Borrow or Steal, which let you rent luxury clothes, bags and accessories, but I imagine the appeal is largely the same. After getting over the initial apprehension of using a second-hand product, I grew more and more excited as I scoured the site. I first looked at categories where I knew I'd want something (like camera gear to improve the look of a production I'm working on). But, as I explored other areas, I realized there was so much I didn't know I needed.

I had to exercise much more restraint when shopping on Grover than I would have on say Best Buy or Amazon, because everything fit into my imaginary budget. (Full disclosure: Grover picked up the tab for the month.) A voice in the back of my head kept saying, "It's just for a month. If you don't like it, you can just give it back." Some devices, such as the Apple Pencil or the Netatmo Weather Station, were cheap enough ($10 a month) that I almost threw reason out the window to try them out.

Sometimes, logic kicked in and I realized that paying $3 a month for a Wistiki tracker was extravagant when I could own a Tile tracker for just $25. But mostly, Grover's prices were reasonable, with devices costing between $3 and $200 a month. I finally picked a gold MacBook, a pair of red Parrot Zik 3 headphones, a Sony HXR-MC2500 video camera and a Godox Witstro AR400 ring flash for a grand total of $294.60.

Minutes after I placed my order, I received a confirmation email (complete with celebratory GIF at the top) with a summary of my items and a note that my products would arrive in two to five days. 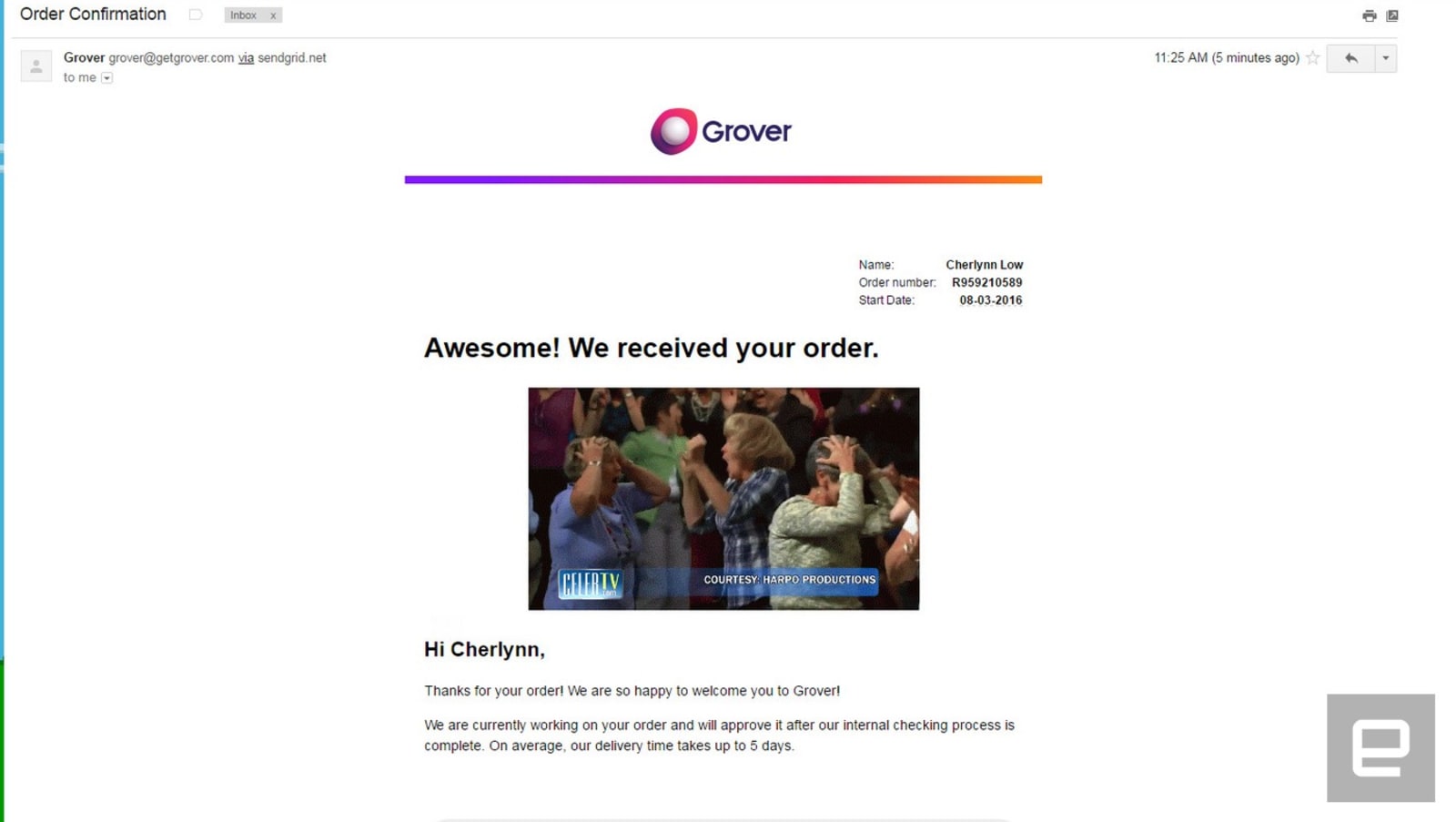 The confirmation email from Grover. That GIF was a nice touch.

The next day, I got an alert that one of my items (the flash) would take longer than five days to ship and that the other three would arrive Friday. That's a quick turnaround, considering I had placed the order two days prior, but it might be because the service is still so new in the US. Wait times could possibly go up to the full five days depending on Grover's popularity and inventory. I was also given the option to ditch the flash altogether or wait for it to arrive the week after.

Friday arrived and a large brown box containing all three items landed in my office. Opening up the box felt just like unwrapping Christmas gifts because boxes for the MacBook and the headphones came wrapped in red paper held together with a Grover sticker.

I was surprised by the quality of the packaging. Everything felt like it had been shipped to me directly from the manufacturer; the boxes were pristine, and the devices still had their protective plastic covers on. But since Grover is in its first month in the US, its inventory is still brand-fresh. I was lucky enough to receive new stuff.

Over time, however, outgoing products will have been through several renters, so you may not experience the same brand-new wrapping I did. I asked Grover CEO Michael Casseu if the boxes would be the same for all consumers. "Of course, we would still use shrink wrap and ensure the packaging experience is always at its best," he said. "If the original package is returned to us a bit banged up, we'll just use custom Grover packaging everywhere to ensure it is the best quality and the best experience for consumers." 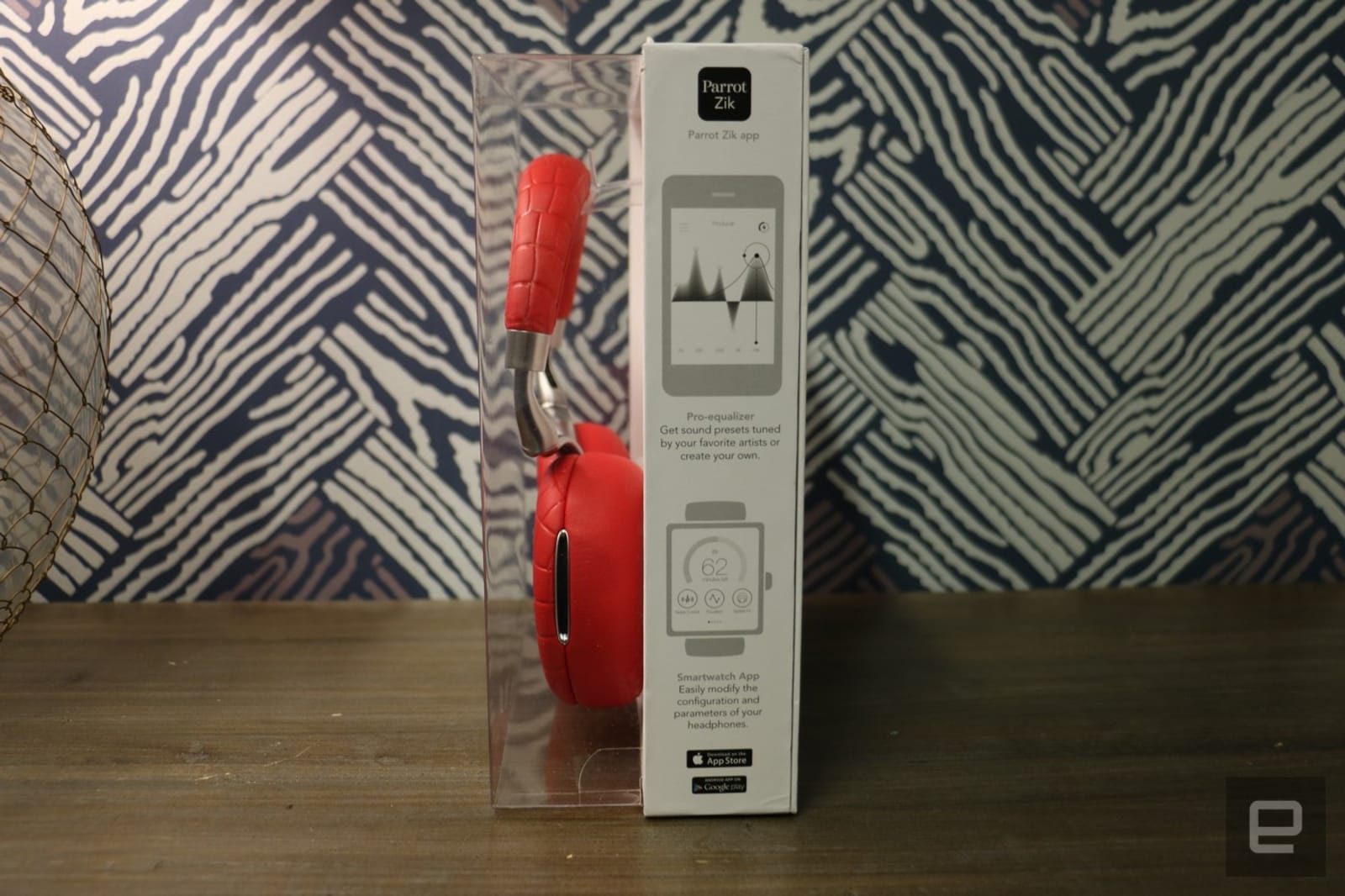 This is how the Parrot Zik 3 headphones arrived.

As I started playing with my new toys, I had to deal with a unique conundrum. Unlike clothes or purses, many devices can retain your personal information and pass it along to the next user. Even though Grover recommends you wipe each machine before returning it and also resets each incoming gadget itself, there are still ways for malicious users to get info off a rental device. That knowledge made me far less comfortable with accessing credit card and other sensitive data on the MacBook I got.

If you're like me, there's a real chance you might damage the gadgets during your period of ownership. According to the terms and conditions, you're liable for 100 percent of damage you cause. But Casseu told me the company will waive 50 percent "of unintentional damage," and that this isn't detailed in the terms and conditions "simply to not look like we're offering insurance to avoid any misuse."

That's problematic. Since terms and conditions are a legally binding document that you have to accept and enter into before checking out, I wouldn't expect Grover to hold up its end of the 50 percent waiver deal. The company may need to reword its terms to encompass this in the future. But in the meantime, go into it fully aware that you'll be responsible for any damage.

Those prickly legal issues aside, I appreciated being able to temporarily own more than a $1,000 worth of gear. Plus, I'm starting to grow really fond of this MacBook and might actually extend the rental myself or buy the damn thing.

Still, as much as I love gadgets, without Grover I wouldn't feel like I was missing out. The service will mostly appeal to people like Engadget Senior Mobile Editor Chris Velazco, who is constantly threatening to buy everything, only to later be disappointed by or bored with his new toys. The rental format not only lets people like Chris save some money and buy without the commitment of ownership, but also reduces waste, since they can return the products once they tire of the devices. Indeed, Chris has already signed up for the service and is expecting two devices to arrive. I feel bad for whoever gets the products after him; his technophilia is actually very disturbing.

Ultimately, Grover provides an accessible, commitment-free gateway into the usually expensive world of tech that most aficionados will find appealing. But it has its issues, like the murky wording around its breakage policy.

It's what Grover says is coming that I'm most excited about. Casseu told me that before Christmas rolls around, the company may launch a pricing plan that could let you rent any three gadgets for $100 a month. That would bring Grover closer to the "Netflix or Spotify for gadgets" format that the company touts itself as, and would further differentiate it from Lumoid or Rent A Center.

For now, I struggle with two things. One, does Grover actually save me money by letting me get devices for cheaper, or does it make me spend more by making me fall in love with what I rented? I honestly cannot decide. And, finally, should I buy this MacBook or nah?

In this article: gadgetry, gadgets, gear, Grover, mobile, personal computing, personalcomputing, rentals, services, wearables
All products recommended by Engadget are selected by our editorial team, independent of our parent company. Some of our stories include affiliate links. If you buy something through one of these links, we may earn an affiliate commission.