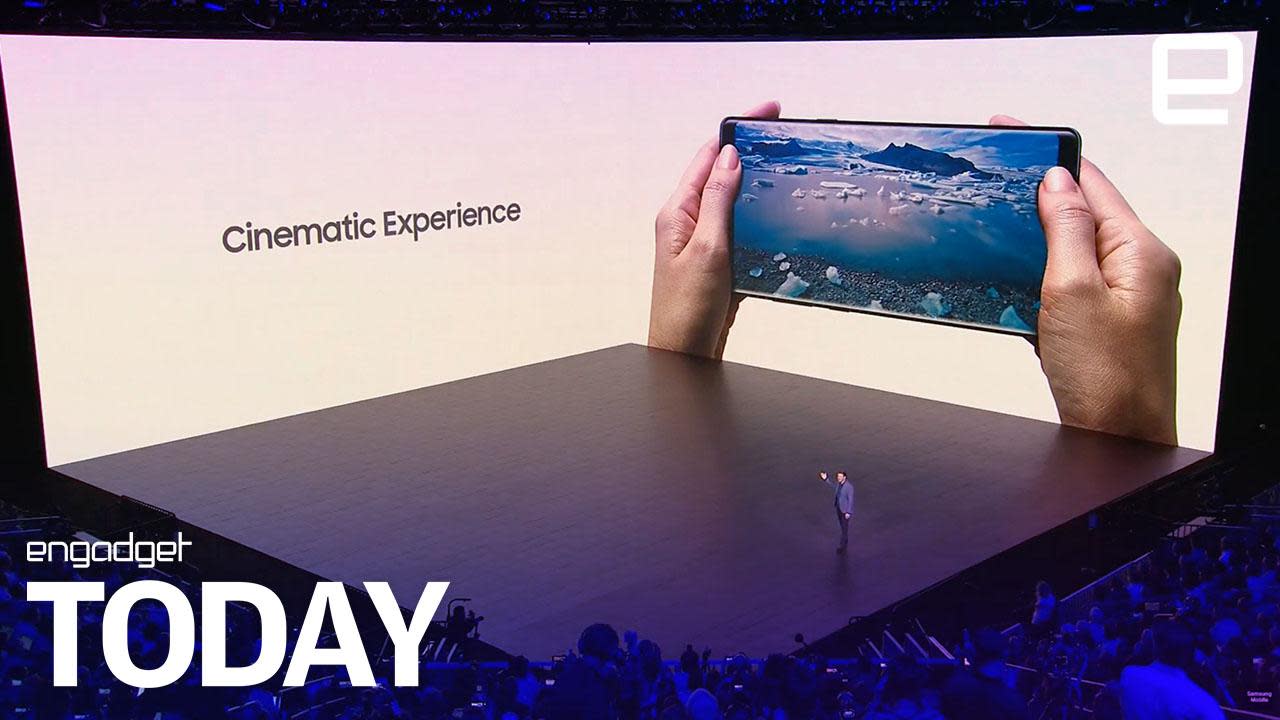 It's been a long, long year for Galaxy Note fans. The Note 7 launched with much fanfare last summer, only to die in spectacular fashion as systemic battery flaws (not to mention hasty decision-making) forced Samsung to recall the fire-prone handset twice and eventually kill it off. Unless you went out of your way to get the Fan Edition, you've had to go without a modern Note for a long time. At last, though, a replacement is here: Samsung has unveiled the Galaxy Note 8, and it might finish the redemption process that started with the Galaxy S8. Yes, the most obvious change is the screen. Samsung is using a 6.3-inch version of the near bezel-free AMOLED Infinity Display you saw on the S8 and S8 Plus, complete with a quad HD-plus resolution (2,960 x 1,440) and curves that spill off the sides. That's only a tenth of an inch larger than the S8 Plus, but it's gigantic compared to the 5.7-inch screens you've seen on Galaxy Notes for the past few years. We'd question the wisdom of curved screens on a pen-oriented device, but there's no doubt that the larger screen should give you more headroom for drawing, multitasking and media playback. Appropriately, there's a fresh App Pair feature that launches two apps at once from shortcuts on the Edge panel, such as YouTube and a chat app. You may have more of a reason to rely on multi-window support knowing that your favorite app combo is a couple of taps away.

There's more to the phone than its visuals. The S Pen is the same as what came with the Note 7, complete with the fine 0.7mm tip and 4,096 points of pressure sensitivity, but you can do considerably more with it. You now have Live Messages, which turn your handwritten messages into effects-laden GIFs for chat and social apps. Think of iOS 10's hand-drawn art, only more elaborate. Also, Samsung is making better use of the always-on display. You can take notes the second you eject the S Pen, pin notes to the screen and edit them on the spot. An upgraded translation feature lets you decipher text by hovering the pen over it to translate whole sentences and convert unfamiliar currencies and languages.

The remaining hardware will be familiar ... with one notable exception. You're still getting the S8's processor (a Snapdragon 835 or Exynos 8895, depending on the market), IP68 water and dust resistance, 64GB of expandable storage (some markets get 128GB or 256GB), fingerprint/face/iris detection, fast wireless charging, and DeX dock support. The biggest performance upgrade is 6GB of RAM versus the 4GB of the S8, and you're looking at a 3,300mAh battery (that's smaller than on the S8 Plus, unfortunately).

However, the camera is a different story. Samsung has hopped aboard the dual rear camera bandwagon, giving you both the S8's 12-megapixel f/1.7 wide-angle cam and a new 12-megapixel f/2.4 telephoto shooter to capture far-off subjects. Both are optically stabilized, unlike the iPhone 7 Plus, and offer more than the usual zoom and portrait-style modes. You can adjust the depth of field (including after the shot) and snap photos from both cameras at once. The front-facing camera is the 8-megapixel autofocusing camera you saw in S8 models.

You won't have to wait long to get the Note 8, at least in the US. Major US carriers (including newcomer Xfinity Mobile) will start taking pre-orders for the phone in midnight black and orchid gray on Aug. 24th, and it'll reach stores Sept. 15th. The pricing will vary from network to network, but there's a consistent set of promos. If you order a phone between Aug. 24th and Sept. 24th, you can get either a free Gear 360 VR camera or an equally free Galaxy Foundation kit that includes both a 128GB microSD card and a fast wireless charging stand. These sorts of bonuses are par for the course with Samsung launches, but they reinforce how eager Samsung is to court cautious Galaxy Note fans. It's willing to spend a lot to get you back.

Update: Carrier pricing is trickling out, and there's no question that the Note 8 will be an expensive phone. T-Mobile has one of the better prices, and it's selling the phone for $930 outright, or $30 per month on a typical installment plan if you pay $210 outright (it's $39 per month and $0 down with a Jump On Demand plan). AT&T is selling the phone for $31.67 on a 30-month installment plan, which works out to $950 up front. Verizon, in turn, is selling the handset for either $40 per month on a two-year installment plan or $960. Sprint is similarly expensive. For context, the priciest iPhone 7 Plus with 256GB of storage costs $969 -- you'll clearly have some advantages (such as that display), but you're shelling out a lot for a 64GB device.

In this article: att, DailyShow, EngadgetToday, EngadgetVideo, entertainment, galaxynote, galaxynote8, gear, mobile, note8event, samsung, smartphone, spen, sprint, t-mobile, verizon, video
All products recommended by Engadget are selected by our editorial team, independent of our parent company. Some of our stories include affiliate links. If you buy something through one of these links, we may earn an affiliate commission.