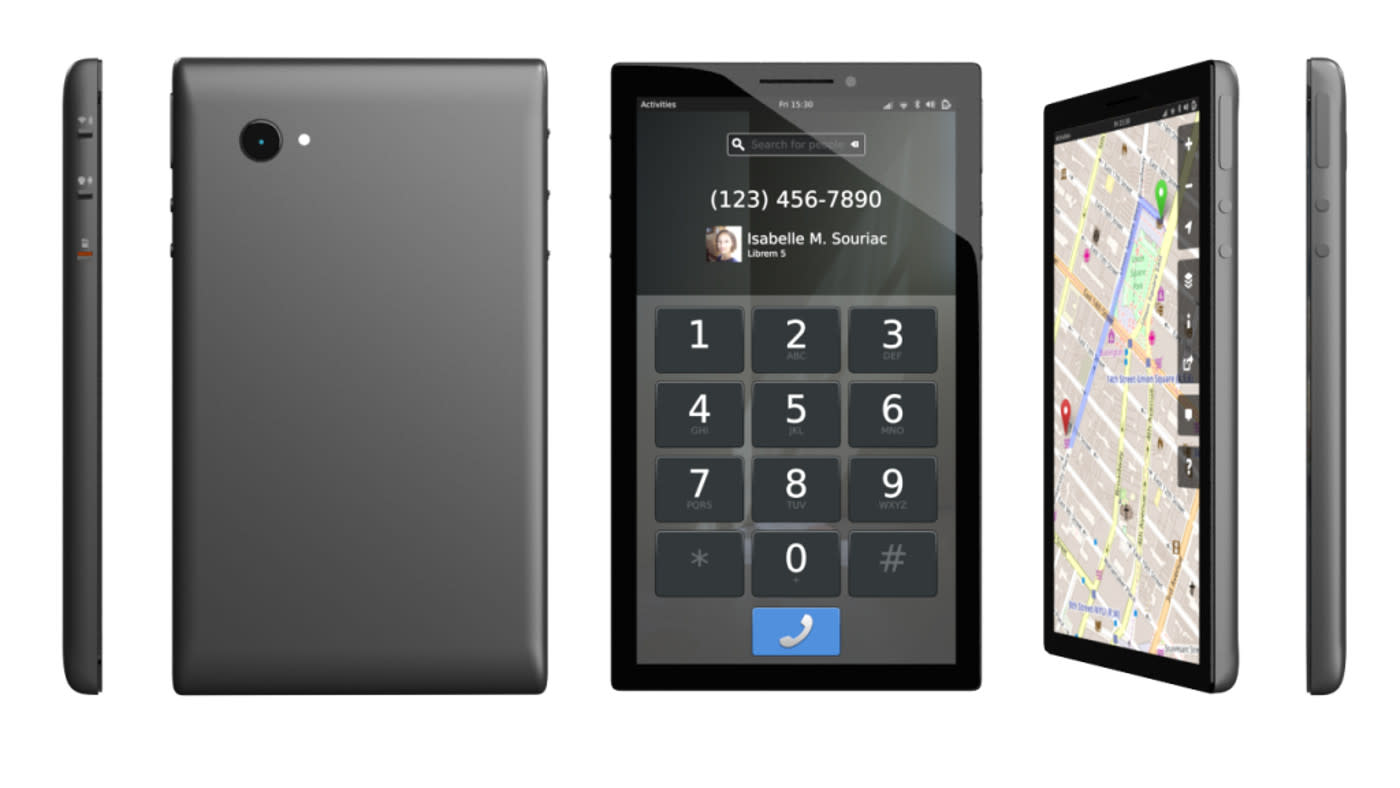 Purism's laptops, which focus on security and privacy, have been doing so well that the company now intends to venture into another type of electronics. The San Francisco-based "freedom-respecting computer manufacturer" is planning to build what it calls the "world's ​​first ​​encrypted, ​​open​​ platform​​ smartphone." It's named the Librem 5, and Purism aims to give it the power to make encrypted calls that hide your phone number, send encrypted texts and emails and set up VPN for web browsing.

The phone will be compatible with 2G, 3G and 4G connections and with any ​​GSM,​​ UMTS or​​ LTE​​ network. It will also adopt the kill switches on Purism's laptops, which you'll be able to use to quickly switch off its camera,​​ mic,​​ WiFi, Bluetooth ​​and even its ​​baseband. The device will run the company's PureOS platform, a derivative of Debian GNU/Linux, but it will also be able to run most​​ GNU+Linux​​ distributions. And since Purism wants to give you as much control over the device as possible, it will release the device's source code, so you can edit it whenever you want.

As you can see, a lot of those features aren't meant for most smartphone users who just need their devices to work. But that's not entirely surprising: Purism has always catered to those who prioritize their privacy and security. This particular device, for instance, is for those worried about the personal info they give up when they connect to public WiFi or when they install apps, especially those that use location services.

It's worth noting that Librem 5 is far from the first smartphone with security at its center: Archos released the GranitePhone that runs the fully encrypted GraniteOS in 2015. A year before that, Silent Circle, a Swiss encrypted communications firm, launched the Blackphone, which also runs a secure OS. Since most people don't look for secure features when choosing a phone, though, privacy-focused smartphones don't usually do well. Silent Circle had to cut a fifth of its workforce for overestimating the demand for Blackphone -- it borrowed enough money to produce 250,000 devices but sold much, much fewer than that.

That said, it's interesting to see how Librem 5 would do, considering the Librem 13 and 15 laptops have seen a 35 percent monthly growth over the past year. The company expects to spend 18 months on testing hardware specifications and the like and has launched a crowdfunding​​ campaign to gauge demand for the first wave of devices and to raise $1.5 million for the project. While Librem 5 is still in its very early stages, Purism already has a price for it: the company expects to sell them for $599, cheaper than the other security-focused phones we've seen thus far.

In this article: gear, librem5, mobile, purism, security, smartphone
All products recommended by Engadget are selected by our editorial team, independent of our parent company. Some of our stories include affiliate links. If you buy something through one of these links, we may earn an affiliate commission.