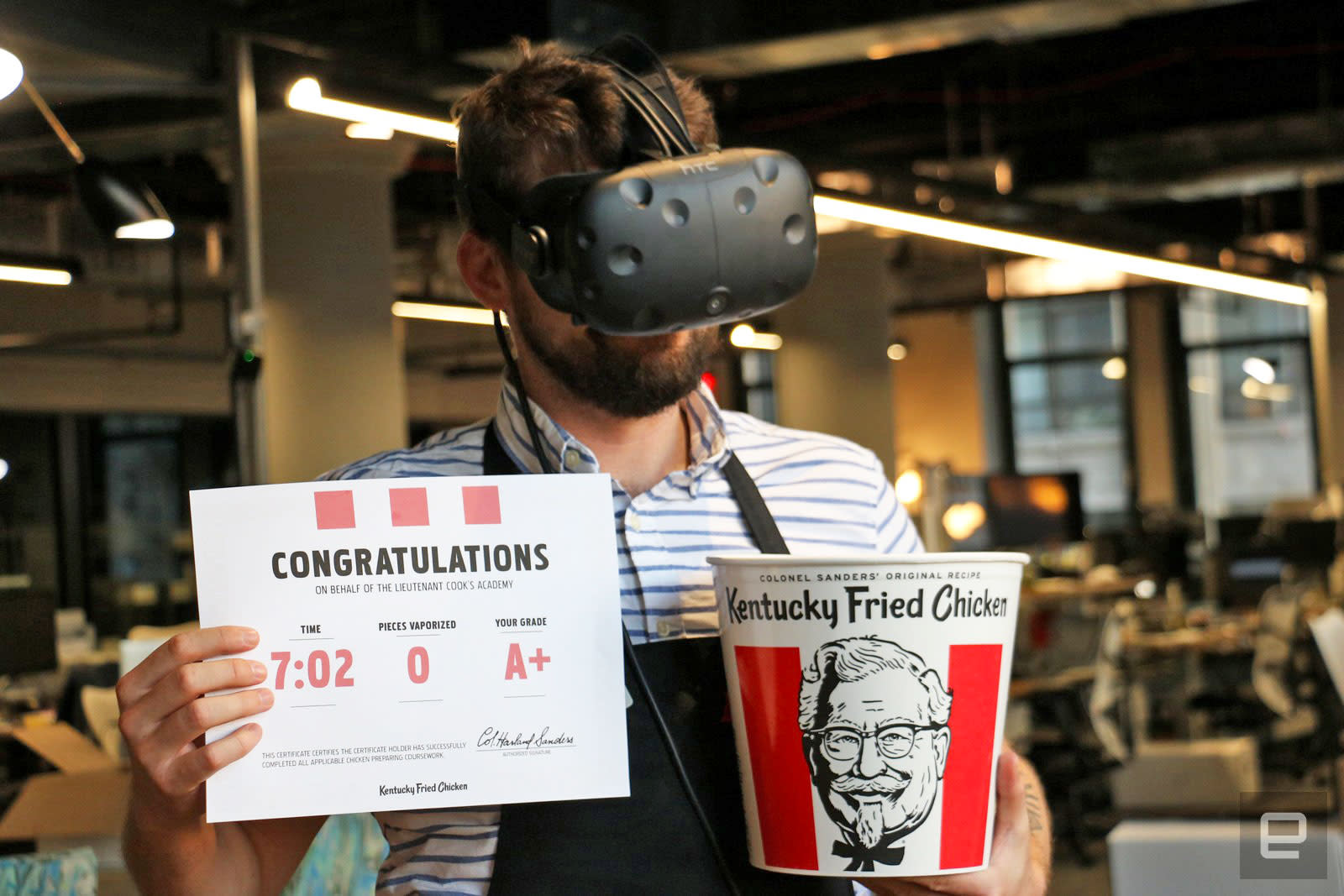 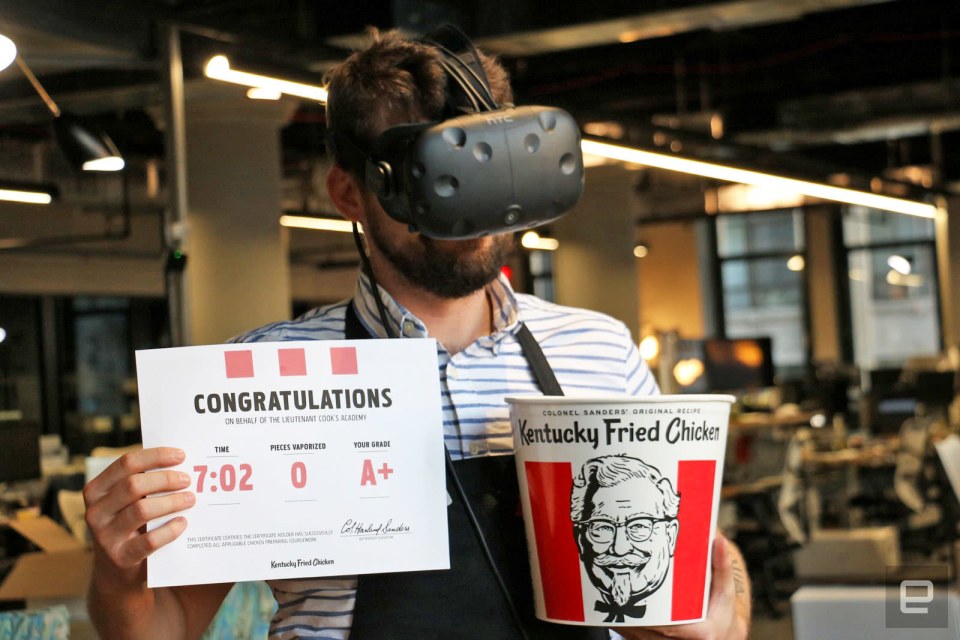 Fast-food franchise KFC is known for its oddball stunts, including special smartphone editions (and wacky chicken-themed accessories). But its latest, a VR escape room cum work-training experience, is one of its oddest yet. I took the bait and accepted KFC's invitation to don a VR headset and run through its little game, which promises to teach anyone the chicken-frying basics. I walked in a skeptic and walked out with a better idea how the heartland franchise makes its bones, so to speak. But as for turning this into a proper, franchise-scalable work-training tool, there are a slew of logistical roadblocks.

Let's cut to the chase: KFC's VR training experience is ... surreal. If you've got a thing for Saw but wanted Jigsaw to kindly instruct you through making fried chicken, this is your bag. Titled The Hard Way -- because you're making Kentucky fried goodness by hand, ostensibly how every KFC employee makes it on-site -- players inspect, oil, batter and fry poultry under the omnipotent eye (and disembodied voice) of the Colonel. It's creepy yet charming, which is KFC's wheelhouse now with its media and stunts. But the 10-minute VR trip won't make you a master chicken fryer, or even a competent employee.

As it stands, KFC's VR trip is a weird diversion, an indulgent free fall into a brand's cultish mythology. I got stuck on some tasks, like figuring out I was supposed to eyeball the whole chicken piece while "inspecting" it and struggling through a final shape-matching test. (I'll admit to getting distracted by the cuckoo clocks and knickknacks plastering the walls of the virtual kitchen.) The oddball humor helps though. When I tossed a chicken piece on the ground, the Colonel's framed portrait used its eyeball lasers to zap it back up to my prep table, for example.

Obviously, the bizarro atmosphere doesn't reflect a real workplace, but the humorous touches would likely keep potential trainees engaged in their VR education. Hell, we could all use more play in the workplace. The Hard Way might look like it was made by Willy Wonka's loony capitalist cousin from the South, but it's good to see a brand not take itself seriously.

To be fair, everyone I talked to reassured me that The Hard Way is in its very early stages, and KFC isn't totally sure how it wants to refine or change it. By no means is it gearing up to replace traditional recruitment training with the VR experience, KFC Head Chef Bob Das told me. At most, the company is showing it to some regional managers for feedback. For now, it's trucking media in for another weird KFC experience and considering next steps -- there's always the possibility that it could augment training in the future, Das said.

When a brand so steeped in its old-school American image tries to jump on buzzworthy tech, it's reasonable to be skeptical. The franchise has done outlandish gadget stunts in the past, from releasing a phone-charging takeout box to suggesting a takeout order based on your face. But its VR experience is a different endeavor, primarily because known companies like L'Oreal and UPS are looking into swapping virtual reality for on-site training. With some tweaks to better simulate the real cooking process, I could see The Hard Way becoming a prototype for KFC's future programs that prep trainees before they reach the real machines on-site. But KFC's VR experience has issues with scalability -- including basing it on Oculus Rift (the pic above shows me wearing a Vive, but it was just for a photo op back at the office). A recent price cut dropped the prosumer headset and controller bundle to $500, but that's still more expensive than smartphone kits like Samsung's $100 Gear VR or the almost-free Google Cardboard. That makes rolling out even a single kit to each of the 17,000-plus KFC locations worldwide astronomically expensive. The team at W+K Lodge that built the experience chose to use the Rift for higher quality and better portability than the cord-bound HTC Vive, but that's still a hefty cost for each franchised KFC location to bear.

In short, KFC's facing the same minor business crisis as every other company considering VR training: Is it feasible? For the fried chicken king, it might be more of a hassle than it's worth to route recruits through a high-tech simulation instead of simply walking them through steps in a kitchen. Given all the piping-hot equipment in the back of a KFC, it might even be dangerous. Google held an experiment where volunteer barista trainees subbed in VR experiences for training videos and found the former more effective -- but they got careless around digital steam wands that would have burned them in real life. Imagine horsing around in a VR mockup of a KFC kitchen and then discovering what boiling fry oil feels like -- finding out The Hard Way on-site, you could say.

KFC is considering releasing the VR experience to Oculus Rift users, though players might rightly write it off as a dressed-up commercial for the company's on-site chicken-frying process. It's a shame they won't get the full media experience, where hapless reporters donned aprons, hairnets and gloves before diving into the VR trip while actual chicken was frying in the next room (talk about indulging all of your senses). If players at home really want a crash course in how a fast-food joint makes its flagship dish and don't mind a bonkers experience, they could do worse than The Hard Way. It beats getting lectured by a Colonel Sanders puppet -- but the future of fast-food training it is not. Not yet, anyway.

In this article: av, kfc, OculusRift, training, VirtualReality, vr
All products recommended by Engadget are selected by our editorial team, independent of our parent company. Some of our stories include affiliate links. If you buy something through one of these links, we may earn an affiliate commission.