Would you pay $700 for extreme slow-mo video and 3D scanning?

I blew my mind earlier this year when I watched my extremely slowed-down footage of a bird in mid-flight. I was testing the Sony Xperia XZ Premium's camera, which can record video at up to 960 fps -- four times as slow as the iPhone's 240 fps. I was mesmerized by the videos, but they still didn't justify the whopping $800 that Sony is charging for that handset. So when I heard that the company was bringing the same camera features to the more affordable Xperia XZ1, I was intrigued. Unfortunately, when Sony revealed the XZ1's price to be $700, most of that enthusiasm evaporated.

That means you'll only be saving $100 with the XZ1, which has a smaller, 5.2-inch screen than the XZ Premium's 5.5-inch panel. To be fair, the XZ1 is impressive in its own right. Like the Premium, the XZ1 uses the same screen technology that Sony uses in its Bravia TVs. While the Premium goes up to 4K, the XZ1 sports a full HD resolution. Both Xperias support HDR content and will play HDR video by default on Netflix and Amazon. At a recent briefing in New York, the XZ1's display looked rich and crisp, although I didn't get to check out those HDR features during my demo.

I was more fixated on the XZ1's camera though. It packs the latest generation of Sony's Motion Eye camera system, which uses a 1GB memory-stacked camera that the company says is five times faster than rival smartphones at processing images. That means you can shoot more photos in rapid succession before running into lag. In addition to the same 960 fps video-recording ability as the XZ Premium, the XZ1 can also produce realistic 3D scans of people and objects in less than a minute. 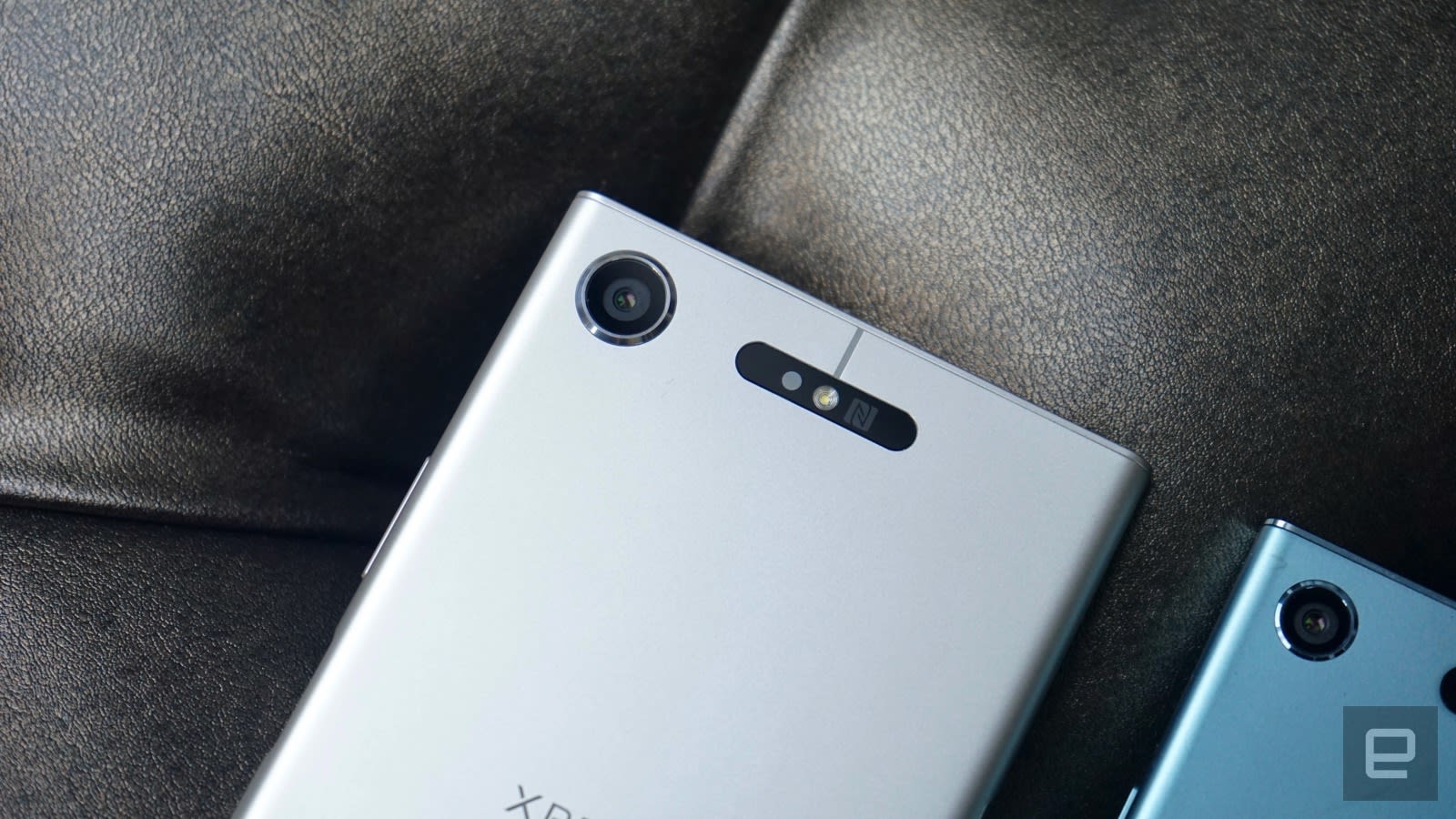 This is done through the new 3D Creator tool that uses Sony's algorithms to capture high-quality scans. You can choose from four modes: Head, Face, Food and Freeform. On-screen instructions tell you to move around your subject while aiming the phone at her head, and once you've collected enough information, the phone will start stitching the scan together. The whole process took about a minute during my testing, and the resulting 3D image was surprisingly smooth and detailed, considering it had been çreated with a 19-megapixel smartphone camera.

You can share these scans with your friends on messenger apps as 3D stickers, use them as avatars, set them as animated wallpaper or send them to 3D printers. Sony says it is working on getting partnerships with popular 3D-printing services to make that process a bit easier, but for now you'll likely have to export the file and bring it to a printer yourself.

While the 3D-scanning feature is a cool new trick, it's not something that you are likely to use everyday. You'll probably find the new Autofocus burst tool more valuable. It's an enhanced version of Sony's existing predictive hybrid autofocus, which debuted in the Xperia X last year. On the XZ1, pictures you shoot in burst mode at 10 fps should remain in focus, even at the camera's full 19-megapixel resolution. On my hands-on device, multiple shots of me walking toward the camera all looked clear, with just the last one appearing fuzzy, which is understandable, as I had gotten closer than arm's length away from the phone. 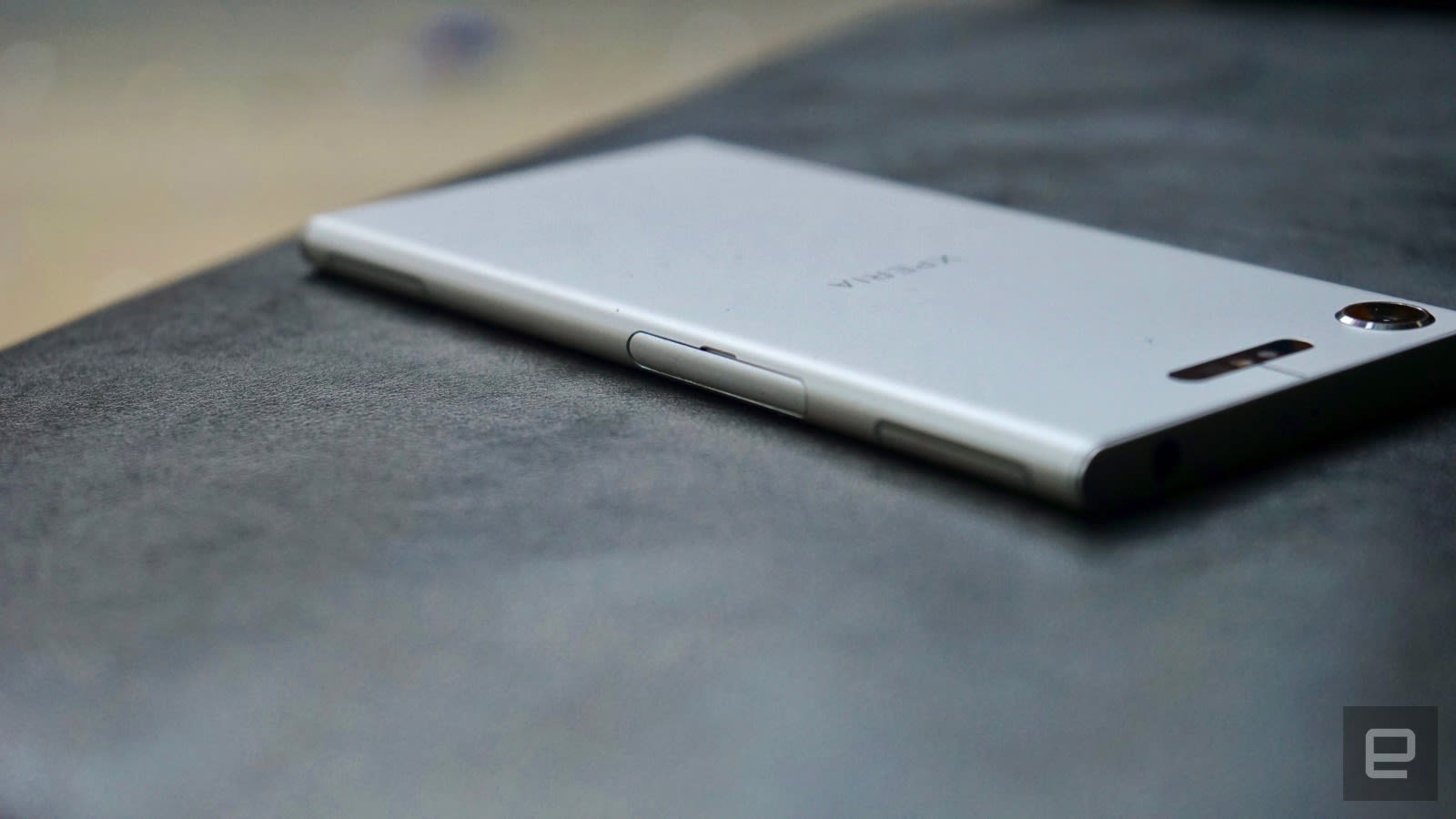 I also tried out the new predictive-motion and smile-capture features, which are somewhat complicated. When you're framing up your photo with the XZ1, it will continuously detect smiles or sudden motion and save those moments. Then, when you press the shutter button, the phone will capture the image at the moment you tap the screen but also moments that it saved in the second before you hit the trigger. After that, it will show you up to four options and you can pick your favorite.

The theory behind this feature is that photo-worthy moments may pass you by as you are getting ready to take the shot. It's a similar idea to the iPhone's Live Photos, except Apple records a brief video and offers more frames for you to select after taking the shot. Predictive motion or smile capture can help you save them even if you didn't hit the button at the exact time an elusive smile or lucky coincidence happened. The trouble is, with the early XZ1 we saw, this was unpredictable and hard to understand. I tried suddenly raising and lowering my arms in front of the unit's camera while a Sony rep tried to snap my picture. But the pictures that the XZ1 ended up showing didn't capture the moments I moved my arms but rather me standing still. Yes, the device I saw was still a prototype with early software, so it's possible Sony could have a more reliable version by the time the phones ship, but for now I remain unimpressed.

Speaking of unnecessary complication, the XZ1's 960 fps slow-motion video recording is as difficult to manage as on the XZ Premium. You'll need to enable slow-mo mode, hit record, then press the trigger button to start recording. As you're filming, you have to tap a dedicated on-screen key to save the next three seconds in slow-mo. You can use this repeatedly as you're recording, but you'll have to be able to anticipate when you want to slow down the clip as you're shooting to get the exact footage you want. And that usually only happens with planned or staged shoots. 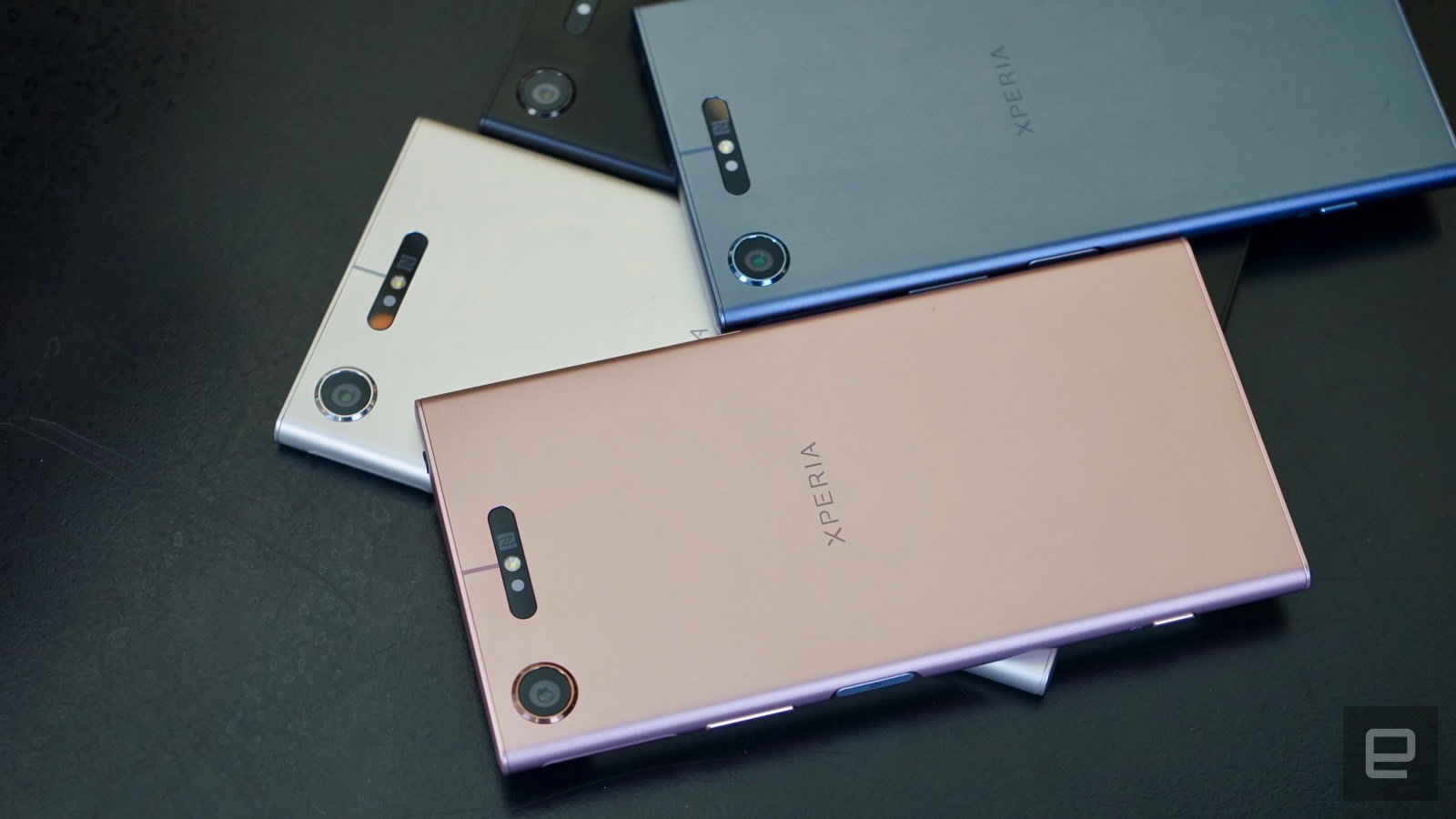 Poor execution aside, the XZ1's rear camera still takes crisp, vibrant pictures. Its 13-megapixel front camera also takes sharp selfies, and Sony finally added a display-flash feature that lights up your screen to brighten up portraits in low light. On my preview unit, I activated this by pressing the flash button on the top left of the viewfinder in selfie mode, and a warm, flattering light took over the screen for a second when I snapped the picture. That's a nice addition, even if it arrives years after it came to other smartphones.

Another feature that Sony has been late in implementing on the Xperia line is a fingerprint sensor, and the XZ1 also lacks one. You'll still have to tap in a passcode, PIN or a swipe pattern to unlock your phone. The XZ1 will be the first smartphone to ship with Android 8.0 Oreo, though, so maybe that will make up for the inconvenience of a missing fingerprint scanner.

The XZ1 has the same Snapdragon 835 processor as the XZ Premium, so you can expect top-of-the-line performance and gigabit LTE speeds where (or when) they're available. The new handset has a smaller 2,700mAh battery than the Premium's 3,230mAh cell. Like you might expect from an Xperia, the XZ1 is rated IP68 for water and dust-resistance and sports a distinctive boxy, all-metal design that Sony says helps with antenna performance. 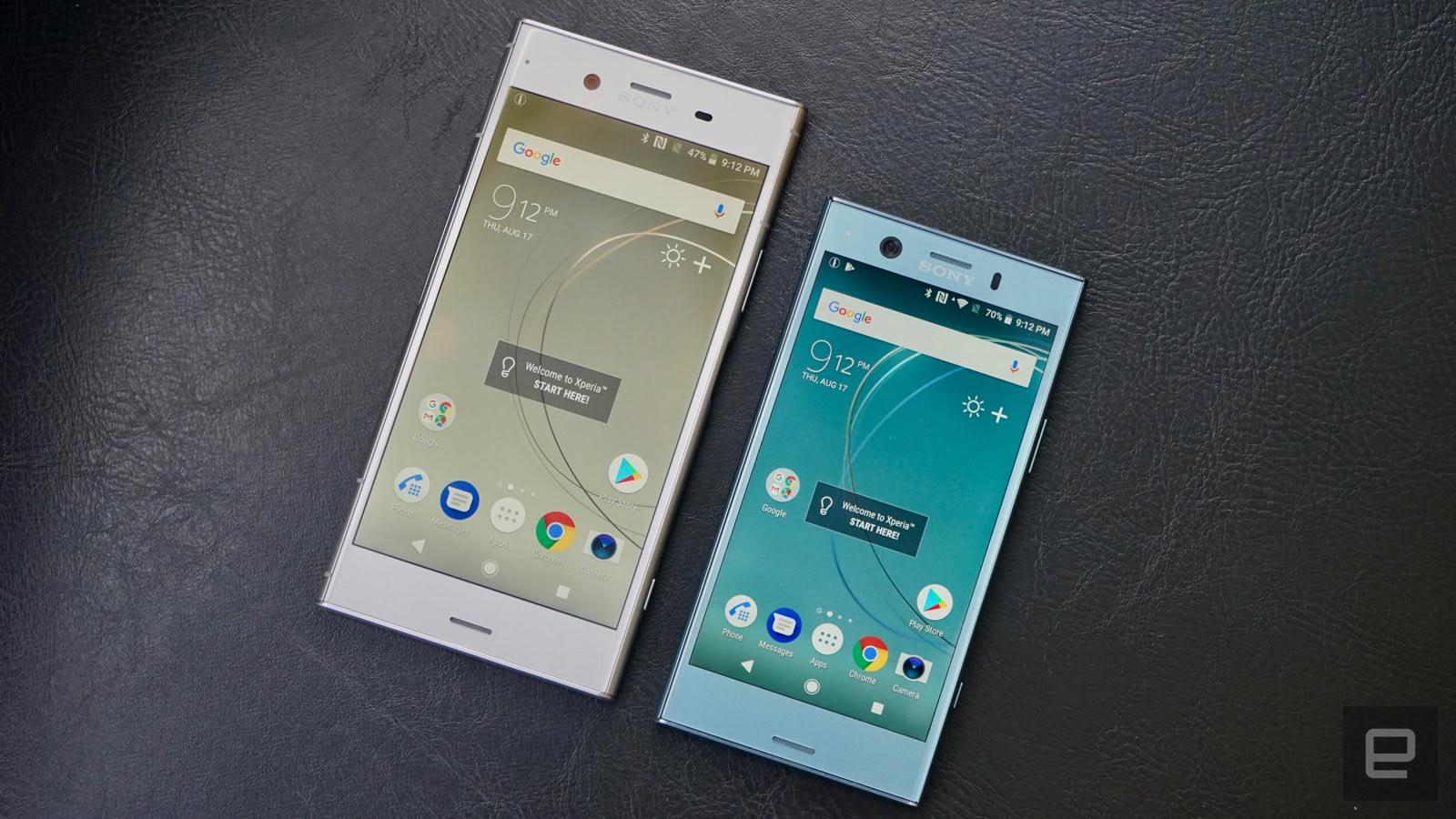 If you want a new Xperia but prefer either a smaller or larger screen, Sony also unveiled the XZ1 Compact and XA1 Plus. The former is a smaller, less-premium version of the XZ1 that will cost $600 when it arrives in October. The Compact has a non-HDR 4.6-inch screen, which is tiny by today's standards. Some people may appreciate the smaller size, but its 720p resolution is ridiculously underwhelming for the price. The XZ1 Compact will also run Android Oreo when it ships, and it sports an 8-megapixel front camera with a wide 120-degree field of view so you can take selfies that include more friends or surroundings. Otherwise, the Compact's rear camera offers the same bells and whistles as the regular XZ1's and is powered by the same CPU.

On the other hand, the XA1 Plus is a mid-tier phone that will cost a more affordable $380 via Amazon when it retails in October. Sony most likely achieved that lower price because it opted for a less-popular MediaTek processor instead of a Qualcomm Snapdragon component. If you're willing to take a chance on a lesser-known processor, you may find the XA1 Plus a good deal. Its 5.5-inch screen has a 1080p resolution, and its battery is a generous 3,430mAh. You'll also get a sharper 23-megapixel rear camera, although it won't have all the new features from the XZ line.

Ultimately, Sony's new XZ1 phones suffer from a flaw that has plagued the company's premium handsets for years: They are simply too expensive for what they offer. Sony seems to keep thinking it can command the higher prices that Samsung and Apple ask for their flagships. But Sony doesn't have the smartphone clout and the vast legions of fans that Sammy and Apple do, and the Xperias, while respectable, aren't quite as advanced as the latest Galaxies and iPhones. They don't even have fingerprint sensors, which are by now so late they might as well not show up. The latest flagships either already have, or are expected to support, iris- and voice-authentication tools. Since I've only experienced a preproduction version of the XZ1, it's possible the finished device that retails on Sept. 19 may feel refined and competent enough to justify its price. For now, though, I sincerely hope Sony rethinks the way it prices its products.