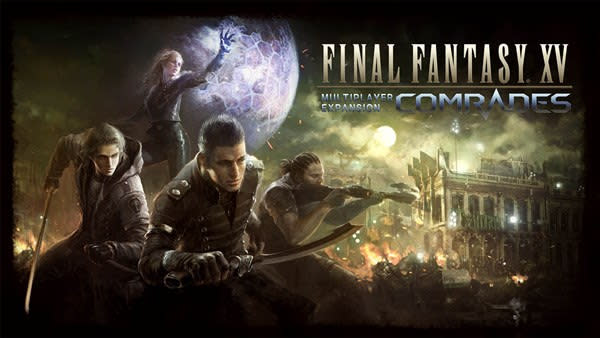 Final Fantasy XV dominated last year's holiday season, and impressively, the game's managed to stay relevant throughout 2017. Whether it's temporary events, side story DLC, mobile games or crossovers into other titles, it's stayed on players' radar. Like earlier extra content, Final Fantasy XV's next release explores a gap in the main game's story. Players will get to create their own custom character and fight monsters with their friends. That's right -- it's multiplayer.

In Final Fantasy XV Multiplayer Expansion: Comrades (its glorious full title), players portray one of the royal police, the Kingsglaive, as they fight monsters across the kingdom -- but it takes place after Chapter 13, so make sure to make it that far if you don't want the main game's story spoiled. Players will get to team up with up to three friends for multiplayer missions or take on solo quests, all as their own custom avatar. A future update will even let them run into Noctis' bro crew (Gladio, Prompto and Ignis).

Comrades will be a paid expansion, available solo for an undisclosed price or included for players who bought a Season Pass for the game. The DLC goes live on October 31st. In the meantime, I suggest rewatching the trailer (above) to enjoy the song, the first that legendary composer Nobuo Uematsu has made for a Final Fantasy game since 2010.

In this article: av, dlc, FinalFantasy, FinalFantasyXv, gaming
All products recommended by Engadget are selected by our editorial team, independent of our parent company. Some of our stories include affiliate links. If you buy something through one of these links, we may earn an affiliate commission.