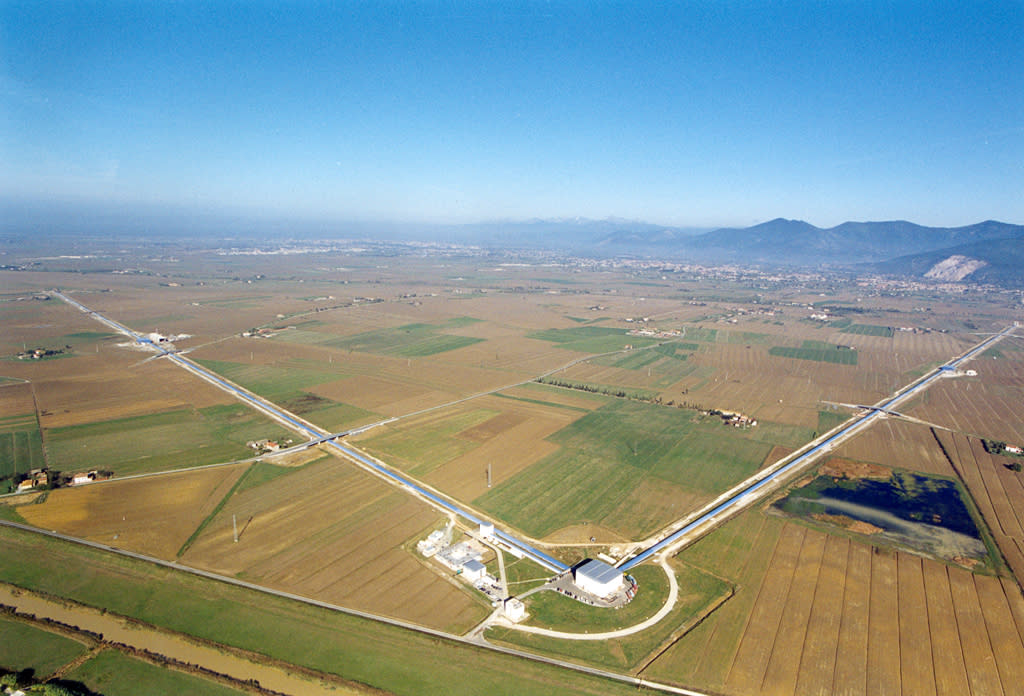 Last year, researchers confirmed the existence of gravitational waves with two Laser Interferometer Gravitational-wave Observatory (LIGO) detectors. Shortly thereafter, they detected two additional gravitational wave-causing events that sent ripples through the universe. Well, we can now add a fourth to that list, as astronomers announced another set of waves. And for the first time, they observed the waves with a third detector -- the Italy-based Virgo.

Let's review a little before we dig into the huge benefits that come with having three detectors rather than two. First, gravitational waves are essentially ripples in spacetime. When some major event occurs in the universe -- like, for example, when two black holes merge into one -- a ripple is sent out in all directions and it travels through spacetime at the speed of light. Albert Einstein predicted these sorts of waves existed, but it wasn't until the LIGO project that researchers could actually observe them.

The LIGO and Virgo detectors are all largely the same design. Two very long tunnels are arranged perpendicular to each other. At the point where they meet, a laser beam is split and part of it travels down one tunnel, and the other part down the second tunnel. Mirrors at the tunnel ends bounce the beams back and if no major cosmic activity has occurred, the two beams cancel each other out. However, if say two black holes slam into each other and create gravitational waves, those waves will stretch and pull spacetime, changing the length of the tunnels ever so slightly. When that happens, the two laser beams are bounced back at slightly different times and when they meet, the difference between them provides astronomers with all sorts of information about what happened, where and when.

The earlier detections of gravitational waves were done with the two LIGO detectors in Washington and Louisiana. Virgo joined them on August 1st and scored its first detection on August 14th. The gravitational waves that were detected were created by two black holes -- 31 and 25 times the mass of our Sun -- merging around 1.8 billion light-years away. The resulting black hole is approximately 53 times the mass of the Sun. What happened to those three leftover solar masses? They were converted into gravitational wave energy.

A third detector means scientists can get a much better idea about which direction the waves came from and it works similar to the way seismometers pinpoint the location of an earthquake. The two LIGO detectors themselves can provide a general direction of the event -- a pretty large area equal to around 1/40th of the night sky. But adding Virgo into the mix reduces the window to a tenth of that area, which means once a signal is detected, astronomers can swing a telescope towards the region of origin and maybe catch a glimpse of it in action.

The Virgo team hints in their press release that more detections from the three units will be announced sometime soon and some are hoping to hear that they've snagged a measurement, and maybe even a visual, of another big celestial event -- two neutron stars merging.

The recent detection was described in a paper published in Physical Review Letters.

In this article: AlbertEinstein, BlackHole, gear, gravitationalwaves, ligo, neutronstar, research, space, SpaceTime, virgo
All products recommended by Engadget are selected by our editorial team, independent of our parent company. Some of our stories include affiliate links. If you buy something through one of these links, we may earn an affiliate commission.