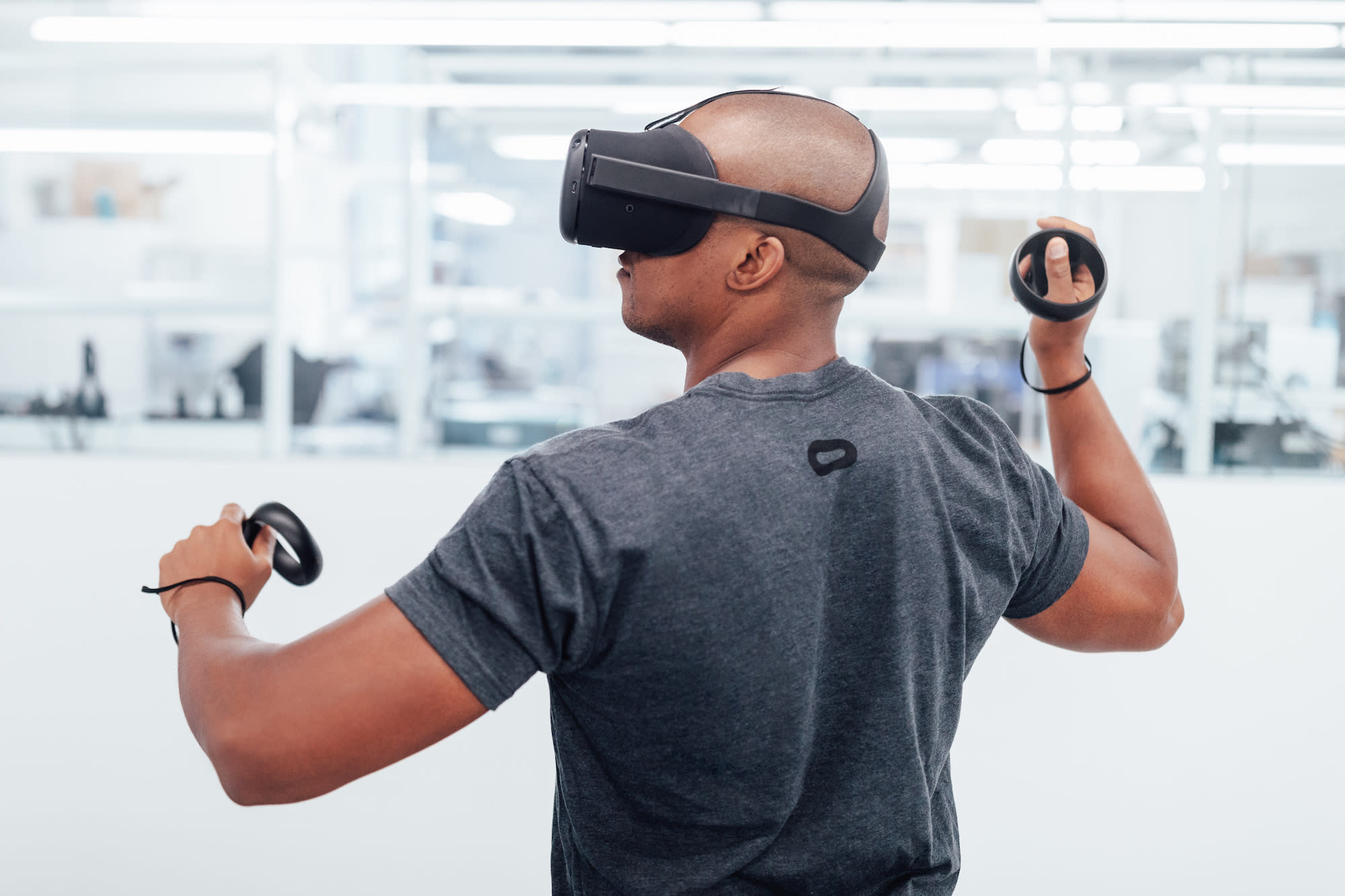 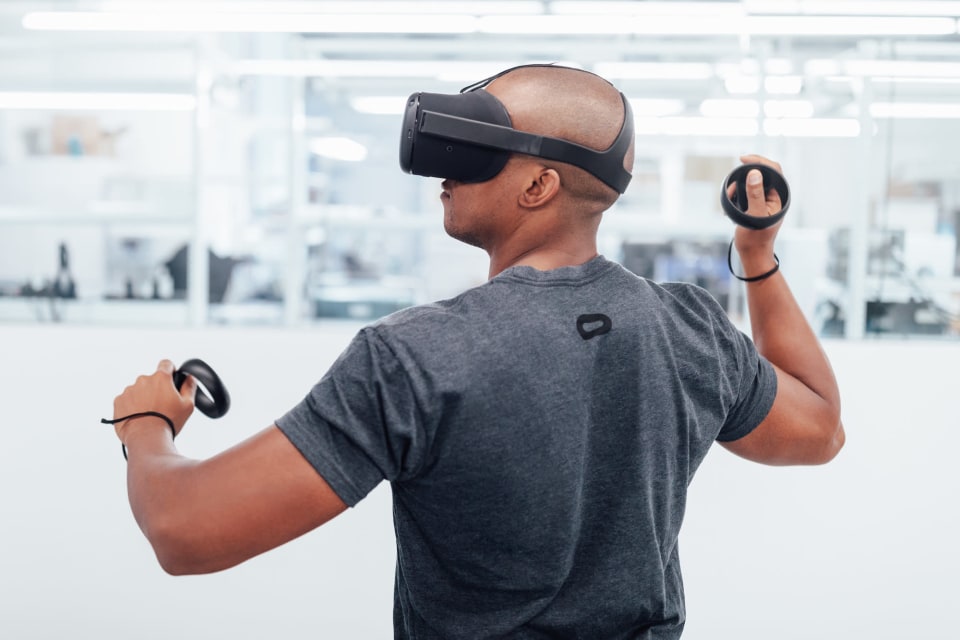 Earlier today, Oculus announced Go, its first-ever consumer-ready standalone headset. But it's actually been working on another standalone headset -- Project Santa Cruz -- for a while longer. I had a chance to try on a really early version of it last year, and it was so unfinished that an Oculus helper had to put it on for me. Today at Oculus Connect 4, I tried on the latest version of hardware as well as the new Santa Cruz controllers, and the difference is night and day. It felt like a completely finished product.

We weren't allowed to take photos of the headset, but the photo seen here offers a good representation of what it looks like. From the mesh fabric surrounding the display to the adjustable head straps, the latest Santa Cruz prototype now looks almost like a wireless version of the Rift. It has an elastic strap along the top, while the rear plastic appears to be clad in a soft elastomer shell.

Putting it on was surprisingly easy -- I just wore it like a backward baseball cap -- and I was ready to go with just minimal adjustment. There's an IPD (interpupillary distance) wheel on the left underside if you want to adjust that too. On the whole, the headset feels soft, snug and lightweight -- easily one of the most comfortable VR headsets I've ever tried.

Then, an Oculus helper placed the new Santa Cruz controllers on my hands. They instantly feel much more compact than the Touch, with a fatter, stubbier grip. Also notable is the lack of a thumbstick; in its place is a large circular touchpad. One big reason for this design difference is that the Oculus folks wanted the infrared LED ring to face upwards, in order to get better tracking from the headset. And in order to move the ring to the top, some design adjustments had to be made. The grip and trigger buttons are still there, however, and feel easy enough to press.

I was instantly launched into a demo, where I was instructed to feed and play with an adorable dog-dinosaur creature hybrid. I used my virtual hands to pluck fruit from the tree and feed them to it, and I also threw a stick into the distance to have the creature fetch it for me. And because I wasn't tethered to a PC, I could walk around the room with ease and didn't have to worry about tripping over wires. Using the controllers as virtual hands felt pretty natural (thanks to the 6DOF tracking), and I got used to it fairly quickly.

I was then guided to yet another demo, and it was set in the Dead and Buried universe, where I was instructed to fend off zombies. This time, feeling untethered really made a big difference. I was able to swing around 360-degrees and shoot the undead that were coming at me from all sides. What's more, I was able to walk around the room to pick up additional weapons and gear (they included a shotgun, dynamite and a big shield). I even pressed down on an Acme-style TNT bomb detonator to set off an area of explosion.

In a way, it was a little unnerving to have so much freedom. I caught myself not wanting to move too far forward, in fear of going outside of my zone and bumping into a wall. I had to sort of peek underneath my headset every so often to make sure I wasn't too close to any furniture or obstacles. I wasn't at all -- the Oculus helpers would've told me otherwise -- but I still felt overly cautious at times.

Another thing that struck me was the audio. I had no headphones on, and still the audio came through loud and clear. That is thanks to the Santa Cruz's spatial audio tech, which lets you listen to the game audio without any headphones. I really appreciated this, because I was able to listen to the people around me while also interacting with the game.

On the whole, the experience was truly amazing. It was really as if I was using a Rift, but without being attached to a PC. It's clear that truly wireless VR is where Oculus is going -- while Go appears to be positioned as the entry-level version, Santa Cruz seems like the one you really want.

Of course, Oculus is quick to point out that Santa Cruz is still in prototype stage, and the final product might not look like this at all. The controllers might look and feel completely different in the end. Seeing as what I tried felt pretty great already, the final version of Santa Cruz seems very promising indeed. Oculus will be shipping its Santa Cruz headsets to developers next year, and we're hoping it's as good as we think it'll be.

In this article: facebook, gadgetry, gadgets, gear, hands-on, oc4, oculus, oculusconnect4, personal computing, personalcomputing, santacruz, vr
All products recommended by Engadget are selected by our editorial team, independent of our parent company. Some of our stories include affiliate links. If you buy something through one of these links, we may earn an affiliate commission.