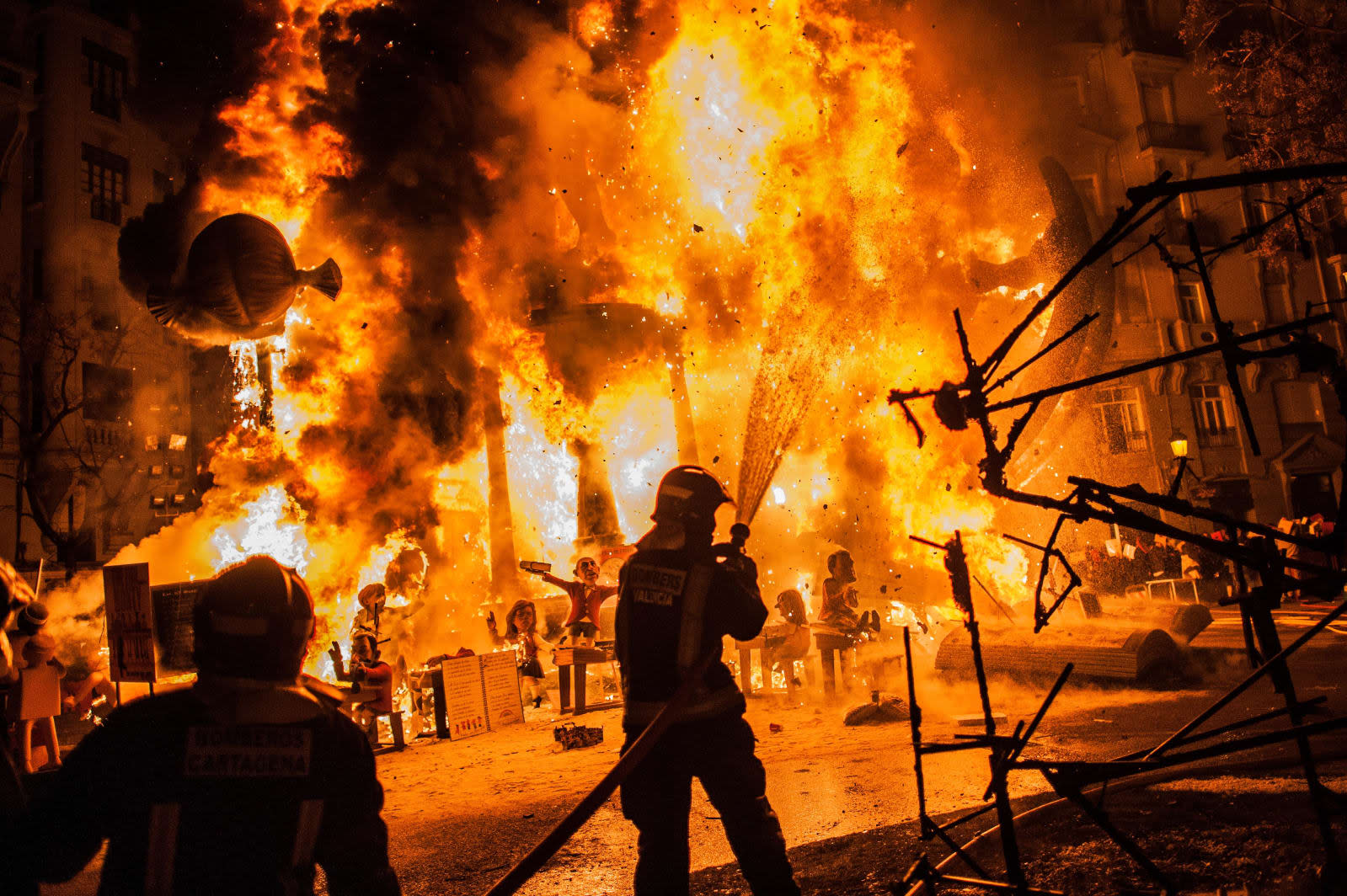 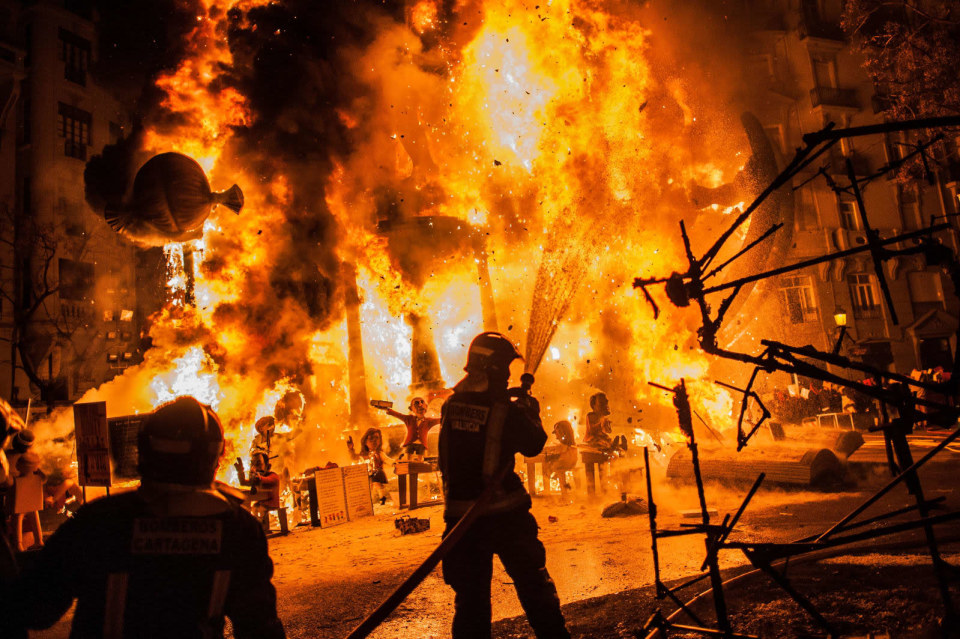 Firefighting gear has evolved continuously since the 1600s to keep pace with the challenges that firefighters face, such as the numerous blazes that are currently ravaging Northern California. During the colonial days, structures routinely burned to the ground because firefighters simply lacked the necessary protection (any protection, really) to enter buildings and fight fires from the inside.

The development of the first helmet in the 1730s, self-contained breathing apparatus (SCBA) in 1863 and the telescoping ladder in the 1880s helped make the job safer. Though it wasn't until the 1980s that modern Nomex- and Kevlar-impregnated gear became common. Today, however, the firefighting community is going through a technological revolution that could grant tomorrow's firefighters near superhuman abilities.

A firefighter's gear -- known as Personal Protection Equipment (PPE) -- consists of a helmet, hood, pants, coat, gloves, boots and SCBA. The outfit typically weighs around 40 pounds. Adding a thermal camera, light, radio, Halligan bar and axe increases that figure to around 75 pounds. On top of that, firefighters are expected to climb multiple flights of stairs and carry or drag fully grown adults out to safety. Dragging all that weight around takes a significant physical toll on first responders, which is why Melbourne-based designer Ken Chen of Monash University designed a powered exosuit to help lighten the load.

"Each year, an estimated 15,500 high-rise structure fires cause 60 civilian deaths, 930 injuries, and $252 million in property loss," Chen told the Daily Mail in 2014. "High-rise buildings can hold thousands of people well above the reach of fire department aerial devices, once the fire is above the operational reach of aerial ladder or elevating platforms the chance of rescuing victims is near zero."

Chen's solution is an exo-suit concept that firefighters strap on over their PPE and can support up to 95 Kg (209 lbs). Like Hyundai's recently-developed "power loader" exosuit, Chen's design would transfer any load directly to the ground, relieving the physical strain of the wearer. Unlike Hyundai's device, Chen's doesn't appear to have gotten off the drawing board just yet.

The water-propelled Dolphin jetpack, however, is real. And it is spectacular. It's designed to help Dubai Civil Defence forces quickly move through the city's network of waterways, avoiding the often gridlocked roads. The pack is attached to a jet ski which the firefighter rides to the scene of the fire, straps on the jetpack and uses the surrounding supply of water to lift himself above the flames and douse them.

The Dolphin is a clever solution for a city that's suffered a spate of high-rise fires in the past five years, including a 2015 blaze at the 63-story Address Downtown hotel, but unfortunately isn't much use against structural fires any distance from open water.

Now, you'd think that a fire's most dangerous aspect would be the flames themselves. Nope. It's actually the smoke, which can disorient and disable victims within minutes as well as obscure the view of firefighters as they move through the building. Many fire companies already employ handheld thermal imaging systems but you generally want to keep your hands free when running around inside a burning building.

That's why UK-based Design Reality created the Sight on behalf of Scott Safety. It's a thermal camera that mounts onto the side of the mask and projects a display onto the visor. This way every firefighter entering a structure fire has easy access to this data, rather than just the camera-wielding team leader. The 8.5-ounce device works for four hours on a set of standard AAA batteries.

Some of the most important work is done prior to ever stepping foot in a flaming inferno. The more information a firefighter has upon arrival, the better. This could be data on the building's layout and orientation, whether there are flammable materials stored within, or the number of occupants (both human and non-human).

Virtually all of this data is available through city agencies like the building inspector or the Planning Department, but it's often locked away in each different databases. Collaboration and data sharing is key, and New York City's FireCast 2.0 system is the concept's poster child. It takes the various pieces of data from NYC's multitude of city agencies, mashes it into a central database and provides detailed information on all 330,000 structures within the city's limits. When combined with on-the-ground data collection from body-worn sensors or UAVs, firefighters will be able to know exactly what they're walking into.

As for actually fighting fires, first responders could soon wield a futuristic arsenal of extinguishing devices including freeze grenades, high-pressure water lances, and wands that knock down flames with electricity and sound. Take the FIT-5 from ARA Safety for example, this 10-pound canister is filled with potassium bicarbonate, which absorbs heat and interferes with the chemical process that produces flame. When thrown into an enclosed area, the heat ruptures the canister causing the potassium powder to escape and extinguish the flames. The $1,300 devices aren't foolproof however.

"It can't be a free-burning fire where it's vented through the roof and the windows are all blown out because the powder has to be contained for it to work," Port Jervis, NY Fire Chief Joseph Kowal told Fire Apparatus Magazine in 2009. "like in a basement fire or an attic fire."

For structural fires that are too dangerous to enter, there's the PryoLance. This device looks and operates like a cross between the water wands at self-service car washes and a water jet cutter. This thing is strong enough, and designed specifically, to bore a tiny hole through exterior walls and then blast a fine mist of water into the inferno.

"By using the Lance to penetrate through the outer structure in very quick time and allowing the ultra-high pressure water mist to flow directly into the thermal column," the company's website reads, "the 'gas cooling' effect will bring the interior temperatures down to well below flashover conditions." What's more, since the high pressure system increases the surface area of each water droplet it sprays (which drastically increases its ability to absorb heat compared to regular fire hose spray), the Lance can knock down flames faster and with less liquid than conventional methods.

But high pressure water is just the start. A pair of engineering students at George Mason University, Seth Robertson and Viet Tran, have developed a fire extinguisher that fights fires with low frequency sound waves. It's similar to tests that DARPA carried out in 2012 but in a portable device. It focuses 30 and 60 Hz sound into a sonic beam that separates burning material from the surrounding oxygen, immediately destabilizing the chemical reaction that produces the flames. The 9Kg prototype only cost $600 to create and remains under development.

A team from Harvard has gone one farther and developed a wand that can disrupt fires at the molecular level with beams of electricity. Running off a 600-watt amplifier, the wand focuses the electric current into a beam. The researchers aren't 100 percent sure why the the system is effective but they believe that since carbon soot is easily imbued with an electric charge and strongly responds to electrical fields once it is, hitting flames with the beam current "shakes" the combustion reaction loose. It's the same basic idea as the sound cannon, just leveraging a different bit of physics to work.

Of course, it's even better to keep firefighters out of harms way in the first place. Enter, the robots. The TAF20 and TAF35 from EMI Controls are equal parts remote-controlled bulldozer and water cannon. A ring of nozzles surround a central turbine and shoot atomized particles of water or fire-retarding foam into the air column. This produces a fine mist that can travel 60 to 90 feet but is fine enough to not hurt firefighters if they walk into the stream. The machine's 64HP motor produces enough power to easily push vehicles out of its way and it's 500 meter control tether, which keeps its operator away from the immediate danger zone, make these robotic heros ideal for tackling tunnel fires.

These are just a few of the high tech responses to the challenges of 21st century firefighting. In the coming years we can expect thermal imaging-equipped drones to become ubiquitous tools and robots to assume more first responder responsibilities -- especially in the most dangerous of situations. And until we put climate change in check, you can bet that we're going to face more devastating fires like the ones currently raging in Northern California, not less so the firefighters of tomorrow will need as much help as they can get.

In this article: gadgetry, gadgets, George Mason University, Halligan bar, Harvard University, Monash University, New York City, Port Jervis, Sight, tomorrow
All products recommended by Engadget are selected by our editorial team, independent of our parent company. Some of our stories include affiliate links. If you buy something through one of these links, we may earn an affiliate commission.