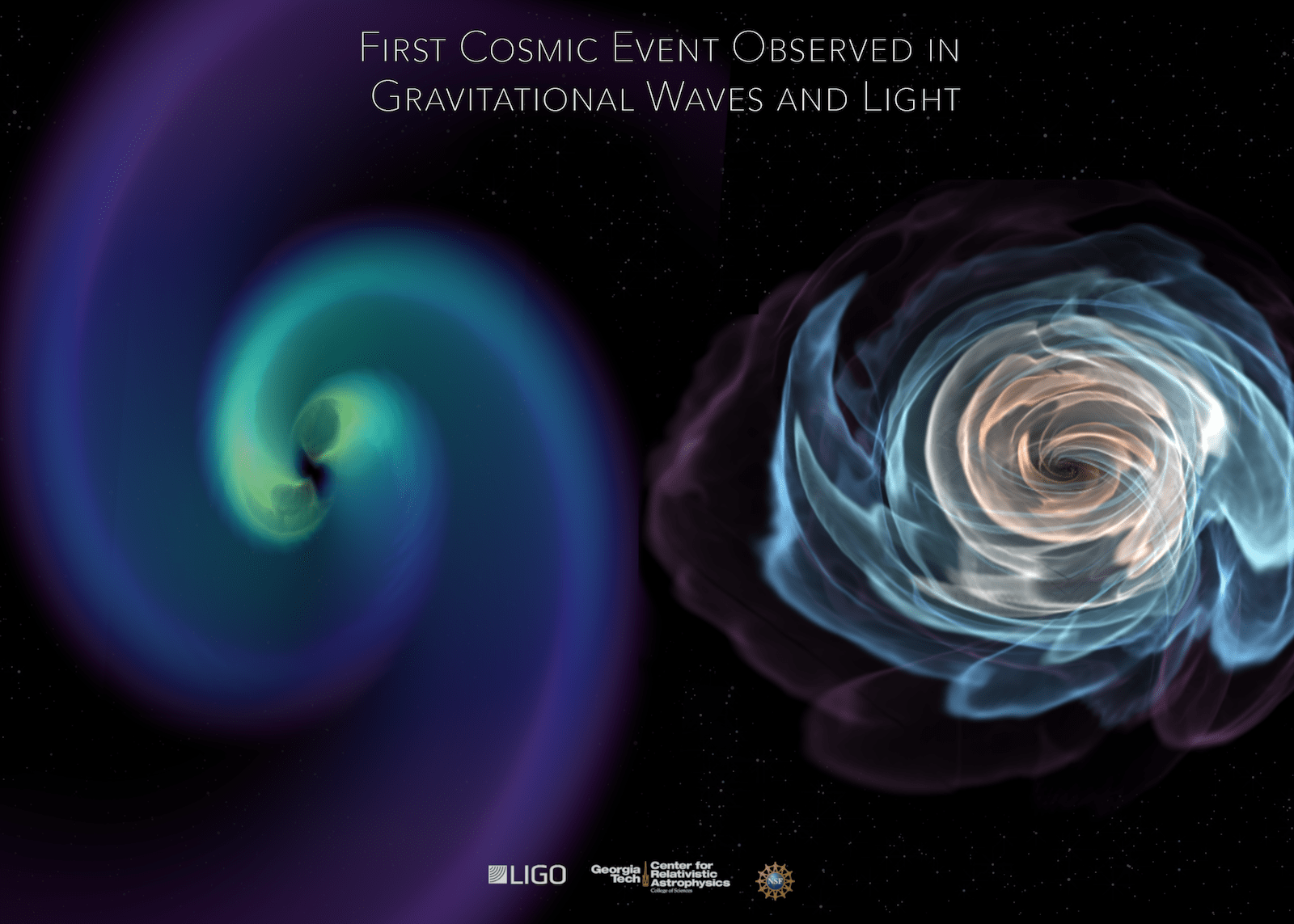 A couple of weeks ago, the LIGO (Laser Interferometer Gravitational-Wave Observatory) and Virgo teams announced the detection of another set of gravitational waves -- the fourth since LIGO's first detection in September of 2015. The observations of these ripples in spacetime are extraordinary in and of themselves, no matter how many times we record them. However, while the first three sets of gravitational waves recorded were by the two LIGO observatories, the fourth was also detected by a newly established third -- Virgo -- located in Italy. And having three detectors allows researchers to triangulate the source of those waves with extraordinary precision.

The importance of that precision was made clear today when the LIGO and Virgo teams announced a fifth gravitational wave detection, the source of which was able to be quickly located. This allowed dozens of other observatories to hone in on it and collect additional data including visual, X-ray, infrared, ultraviolet and radio wave recordings -- meaning researchers all around the world just collected, and are continuing to collect, a massive trove of information that has given us the most detailed look at a gravitational wave-generating event ever.

The previously recorded gravitational waves were caused by black holes merging many millions of light-years away. However, these new waves, recorded on August 17th, originated from the merging of two neutron stars -- very small but incredibly massive stars. They're what's left over after a massive star collapses and all of the protons and electrons get packed tightly together. They're around the size of a city, but 1.3 to 2.5 times the mass of our Sun. Just a teaspoon of a neutron star's matter can weigh more than one billion tons. The gravitational wave recordings indicated that this latest event was much closer than previous ones, around 130 million light-years from Earth. Around the same time that LIGO and Virgo picked up the signal, a bright flash of gamma rays was detected by NASA's Fermi space telescope, and combined, those data allowed researchers to pinpoint which direction the waves were coming from. Armed with that knowledge, thousands of researchers around the world, manning more than 70 ground- and space-based observatories, were mobilized and all of them began collecting additional data from the neutron star merger. "This event has the most precise sky localization of all detected gravitational waves so far," Jo van den Brand, spokesperson for the Virgo collaboration, said in a statement. "This record precision enabled astronomers to perform follow-up observations that led to a plethora of breathtaking results."

This strategy, called multi-messenger astronomy, has been a goal of LIGO researchers from the very beginning because observing these sorts of events with gravitational waves and light at nearly the same time can provide far more detail than either can alone. "This detection opens the window of a long-awaited 'multi-messenger' astronomy," David Reitze, executive director of the LIGO Laboratory, said in a statement. "It's the first time that we've observed a cataclysmic astrophysical event in both gravitational waves and electromagnetic waves -- our cosmic messengers. Gravitational-wave astronomy offers new opportunities to understand the properties of neutron stars in ways that just can't be achieved with electromagnetic astronomy alone."

And the collection of data was truly a team effort. Once astronomers around the world were notified of the detection, the hunt began for the source. David Cook, a postdoc at Caltech, quickly made a list of 50 possible galaxies that could be hosting the neutron star merger. A few hours later the Swope Telescope located in Chile detected an optical signal that seemed to match the gravitational wave and gamma ray signals in a galaxy called NGC 4993. Shortly after that, the Gemini South telescope -- also in Chile -- detected an infrared signal from the same area.

So what have we learned from this event so far? Quite a lot actually, and more information is still being collected. The head of Caltech's astrophysical data analysis group for LIGO, Alan Weinstein, said, "The detection of gravitational waves from a binary neutron star merger is something that we have spent decades preparing for. On that morning, all of our dreams came true."

One major finding was that neutron stars give off gamma ray bursts when they merge, which had only been theorized before. But Fermi's initial recording, along with the confirmation from the European Space Agency's INTEGRAL gamma ray observatory, have finally provided researchers with solid evidence.

Secondly, a big question about where the heavy elements of our universe come from may have been answered. The lightest elements, hydrogen and helium, are thought to have been formed during the Big Bang while heavier elements from lithium up to iron are generated by stars. But where most of the other elements come from has been a bit of an unknown. That is, until now. Infrared observations from the likes of the Gemini Observatory, the European Very Large Telescope and the Hubble Space Telescope showed that the neutron star merger produced those heavier elements. "For the very first time, we see unequivocal evidence of a cosmic mine that is forging about 10,000 earth-masses of heavy elements, such as gold, platinum and neodymium," said Mansi Kasliwal, leader of the Global Relay of Observatories Watching Transients Happen project, a collaboration made up of dozens of astronomers and 18 telescopes on six continents.

There were a handful of surprises, though. The gamma ray signals that spewed out of the merger were surprisingly weak. And, even a week after the gravitational wave detection, researchers still hadn't observed any X-rays or radio waves. X-rays were eventually detected by NASA's Chandra X-ray Observatory nine days after the merger. It took 16 days for the Very Large Array in New Mexico to pick up any radio waves. These delayed waves and wimpy gamma ray signals spurred Kasliwal and her colleagues to design an explanatory model wherein a pressurized cocoon-like structure forms during the merger that traps the waves.

While the radio waves may be the slowest to arrive, they stick around much longer than the others and bring with them a ton of information, which could include how much energy was in the explosion, how much mass was spewed out and whether the merger might have an impact on star formation. "The radio emission arrives last but persists much longer than emissions at other wavebands," said Caltech astronomer Gregg Hallinan. "Radio comes late, and it comes slow, but it brings amazing information about the cosmic cataclysm."

This event is the most intensively studied transient astronomical occurrence in history and it's hard to overstate just how important it is. It has not only provided scientists with far more data than they've ever had on such an event, it demonstrated just how wildly effective multi-messenger astronomy is. With a global web of observatories all focused on the same target, we stand to make substantial advances in our understanding of how the universe formed and continues to evolve. "The story that is unfolding for this event is more complete than for any previous event in astronomical history," said Hallinan in a statement. "This complete story -- both hearing and seeing the violent universe -- is the gift of multi-messenger astronomy," he continued. Laura Cadonati, a physics professor at Georgia Tech and the spokesperson for the LIGO Scientific Collaboration said, "This detection has genuinely opened the doors to a new way of doing astrophysics. I expect it will be remembered as one of the most studied astrophysical events in history." The data described today in a handful of papers published in Science and Physical Review Letters are just the beginning. Observatories around the world will be releasing more findings in the weeks and months to come and many will continue to observe the effects of the neutron star merger for months, even years. And this is just one event. "We even more eagerly anticipate the detection of gravitational waves from different kinds of known, extremely energetic astrophysical objects, like rapidly spinning pulsars, supernovae and neutron star quakes," said Weinstein, "and, especially, from heretofore unknown astrophysical objects." It is truly an astoundingly exciting time.

In this article: astronomy, astrophysics, BigBang, BlackHole, caltech, ChandraX-rayObservatory, element, fermi, GammaRay, gear, gravitationalwaves, ligo, nasa, neutronstar, RadioWaves, research, science, space, telescope, universe, verylargearray, VeryLargeTelescope, virgo, xray
All products recommended by Engadget are selected by our editorial team, independent of our parent company. Some of our stories include affiliate links. If you buy something through one of these links, we may earn an affiliate commission.