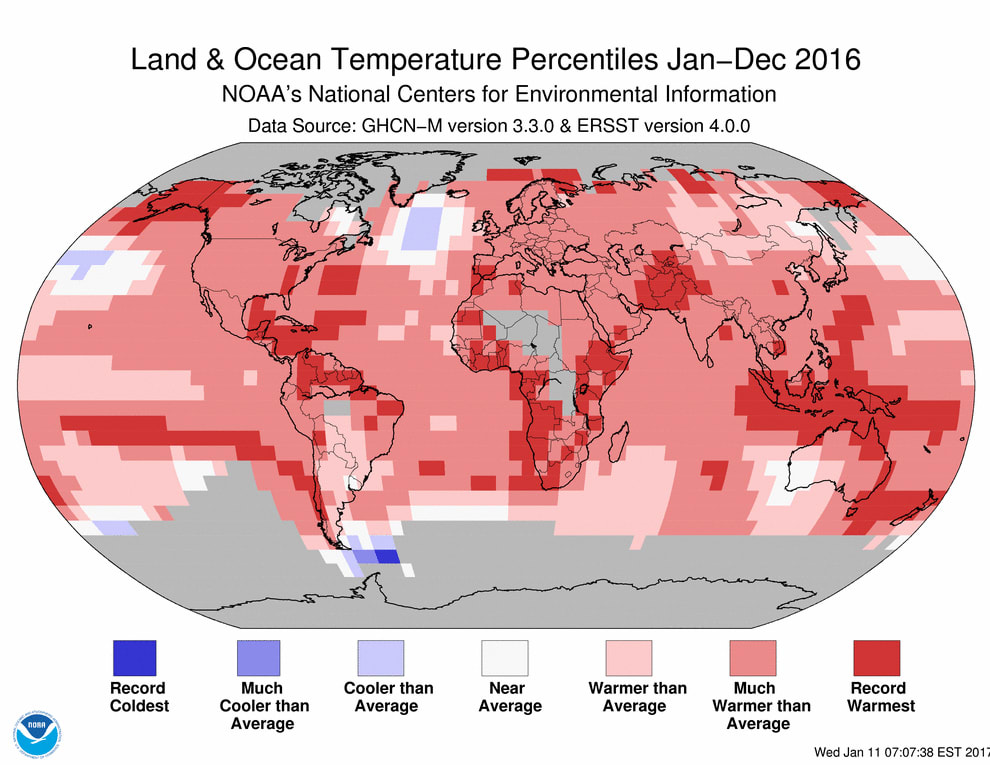 According to a joint report from NASA and the National Oceanic and Atmospheric Administration, 2016 was officially the hottest year on record. If that statistic sounds familiar, it's because 2015 was also the hottest year on record. As was 2014 before that. And those three years of rising temperatures mean the planet is about two degrees Fahrenheit (1.1 degrees Celsius) warmer than it was in the late 19th century.

The conclusions reached in NOAA and NASA's joint report were further confirmed by the UK's Met office, and the ongoing trend is one that should be hard to ignore at this point. "We don't expect record years every year," NASA Goddard Director Gavin Schmidt said in his agency's report, "but the ongoing long-term warming trend is clear." Since 2001, the planet has seen 16 of its 17 hottest years on record.

Although El Niño contributed to some of the warming effect in late 2015 and early 2016, researchers reiterated that the long-term effects of human-made CO2 and greenhouse gas emissions are the biggest factor behind rising temperatures. Not every single region on Earth set a record in 2016 -- the lower 48 US states had their second hottest year ever, for example. But temperatures in the Arctic were especially bad, hitting 20 to 30 degrees Fahrenheit above average and leading to the lowest levels of sea ice ever recorded.

With the effects of El Niño coming to a close at the end of last year, scientists expect 2017 to cool off a bit. But, according to the New York Times, the record-setting scale has researchers worried that the effects will only speed up in the coming years. As both the Times and the Washington Post noted, the report also comes just two days before the inauguration of President-elect and climate change denier Donald Trump, and on the same day that Trump's pick to lead the EPA Scott Pruitt will appear before his Senate confirmation hearing.

Via: Washington Post, New York Times
Source: NASA, Met Office
In this article: climate, climatechange, donaldtrump, globalwarming, green, MetOffice, NASA, nasagoddard, NOAA, politics, science, scottpruitt
All products recommended by Engadget are selected by our editorial team, independent of our parent company. Some of our stories include affiliate links. If you buy something through one of these links, we may earn an affiliate commission.