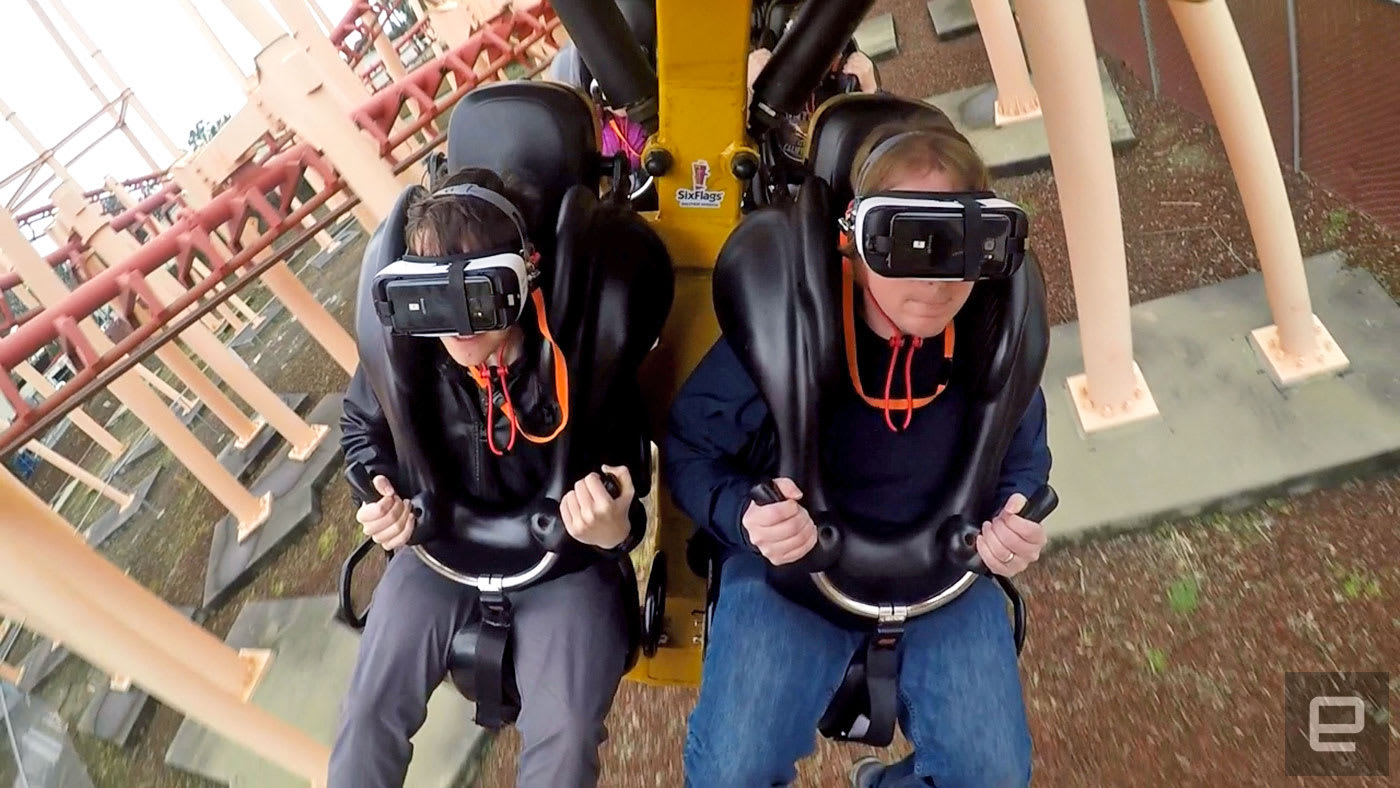 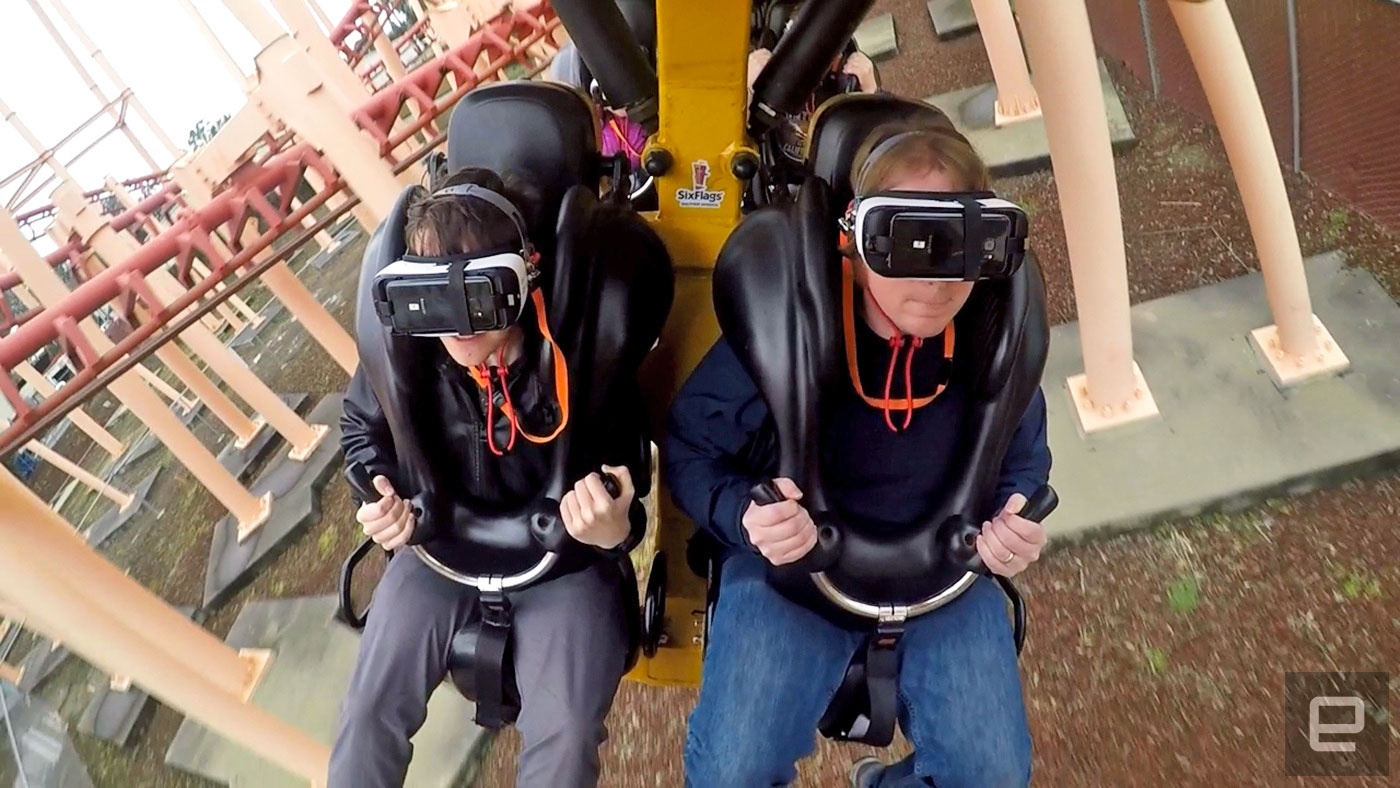 Imagine screaming through deep space, swerving through the wreckage of exploding starships in a high-octane scene plucked straight out of a science fiction movie. Suddenly the universe stops, frozen in time as your body continues to hurl through the void at high speed. Your stomach churns at the realization that it's moving but, somehow, the world around you isn't. That's what happened to me this weekend on Six Flags' Galactic Attack -- a virtual reality roller coaster, available at Six Flags' two California parks, that broke halfway through my ride. Twice.

This wasn't the experience I was expecting. After all, Galactic Attack isn't Six Flags' first virtual reality roller coaster. Between the park's experience and my personal love of VR, I was looking forward to a smooth ride. My optimism disintegrated when my VR headset froze during one of the ride's first twists. Twice, the view in my Gear VR headset halted for more than a second, leaping forward to "catch up" with the speeding ride vehicle and creating a gap between what my eyes were seeing and the g-forces my body was experiencing. It was nauseating. If everything had gone as intended, I probably would have come away thrilled by a high-speed VR space combat experience that perfectly synced with the roller coaster's track. Instead, I was fighting a headache brought on by simulator sickness. 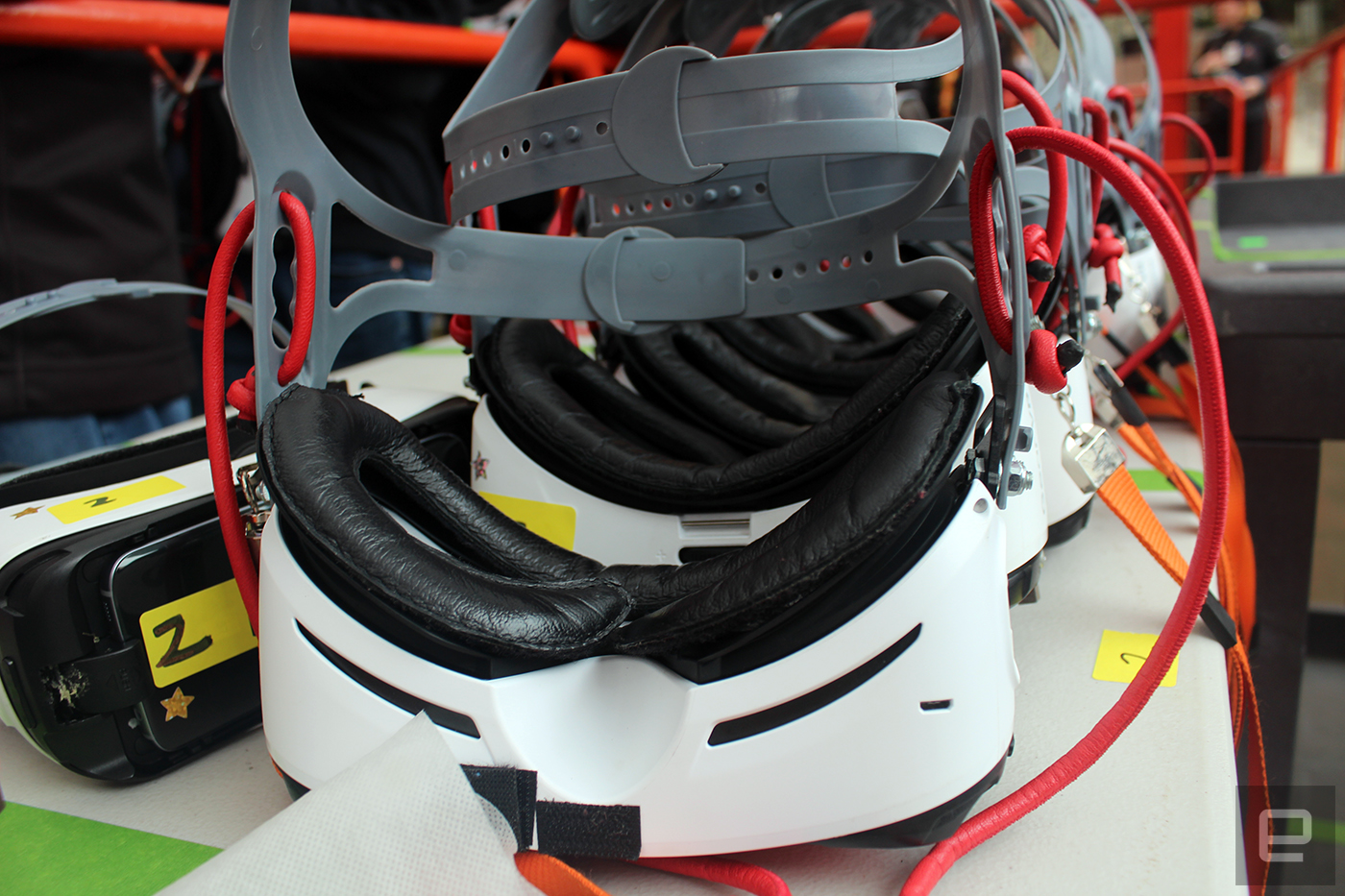 This isn't the typical riding experience, but it's not unprecedented. Park officials told me that most guests are treated to a smooth virtual reality adventure, but certain seats on the ride vehicle have a higher chance of losing synchronization with the track. It's a Bluetooth problem. Each headset connects to a black box mounted above the seats near the center of the car. On straightaways and loops, this hub can easily reach every rider's Gear VR headset, but sometimes, tight twists and inversions can briefly put the roller coaster's steel track between a specific user and the black box, breaking the Bluetooth connection just long enough to stall the simulation.

Six Flags' representative told me it was enough of a problem that one of the park's earlier VR roller coasters barred users from using Gear VR headsets in the front row, and the transmitter has since been moved to a location that minimizes the issue. Minimizes, yes, but doesn't eliminate. 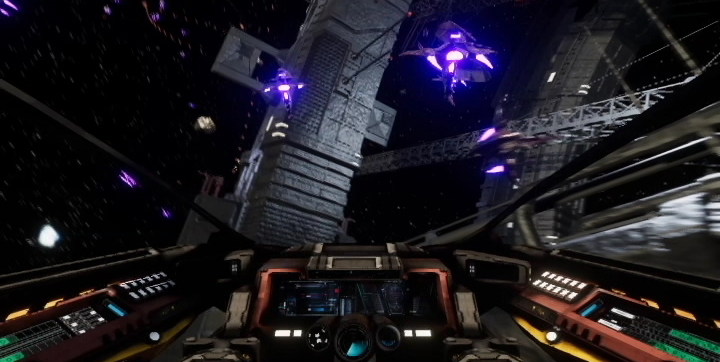 Perhaps I'm being too harsh. When the virtual reality space battle wasn't frozen, it was breathtaking. It started off by showing me the real world through the Gear VR's passthrough camera before drawing the roller coaster through an augmented reality wormhole to deep space. There, I was more than a passenger; I was a participant, playing a fast-paced action game that tasked me with shooting down alien fighter pilots while being rocketed through the chaos of a massive space battle. I walked away intrigued by the experience, but I was still nauseated. Enough so that every time I thought about riding Galactic Attack again, I felt sick.

If you ride Six Flags Discovery Kingdom's Galactic Attack VR roller coaster, you probably won't have the broken, frozen VR experience I endured. Park staff told me it happens only on a few seats at the front of the car, and even then, only rarely. Six Flags maintenance supervisor Charles Laureano claims that most riders don't get sick at all. "The New Revolution Galactic Attack roller coaster is synched precisely with the coaster's drops, twists and turns," he said in a statement. "Because of this, riders are not affected by motion sickness as some might expect when on a VR coaster." Indeed, park staff told me that sitting in the middle and rear seats will offer a more consistent experience, but a potentially nauseating ride shouldn't even be an option -- not even if the chances of failure are low. 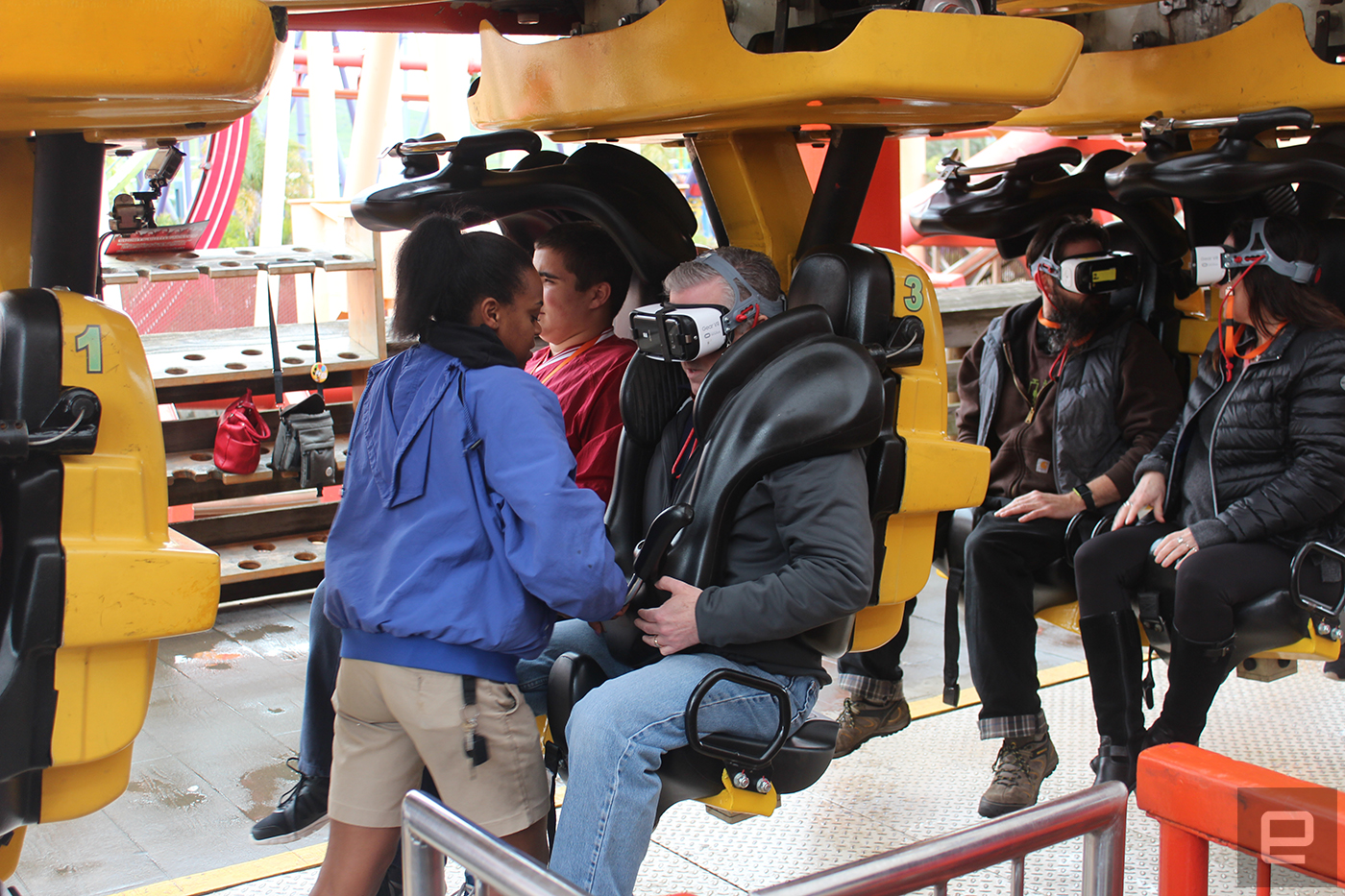 Theme parks have always been centers of innovation, and virtual reality has the potential to be the next big revolution in ride technology -- but harnessing that potential means accepting responsibility for it. Right now, Six Flags has a VR roller coaster system that sees failure as inevitable. The fact that my broken, stomach-churning VR experience was a known but acceptable issue is, frankly, unacceptable. I'm lucky to have a high-end VR headset at home, but many people will experience virtual reality for the first time on a roller coaster. They deserve to have that first foray into a digital realm be safe, exhilarating and free from avoidable simulator sickness.

Update 2/27/2017: After investigating the incident further, Six Flags contacted us to explain that a weak Bluetooth signal probably what wasn't froze my VR headset. The real culprit, it turns out, were missing files on the Gear VR headset. Thomas Wagner, CEO and co-founder of VR Coaster, says the space battle's animation sequence is composed of 15GB of images, which should have continued in sequence even if the headset lost synchronization with the black box. Apparently, some of those files were lost when the VR experience was transferred to the device I wore. "We found that it was just an incomplete installation on the headset," he told me after some investigation, "not a general issue with the ride." He says it's the kind of problem that can sometimes slip through in the first days of ride operation, but reports like mine help them get fixed. Wagner tells me that Six Flags is now checking the installation on every device at the park to make sure they have complete installations.

"Six Flags really does have high quality requirements," he explained. "They would have never knowingly accepted such a possibility for an image freeze." He said the key to figuring this out was how long the freeze was -- a weak Bluetooth signal would have caused a stutter at best, but a long hang of up to a second indicated a bigger problem. "When parts of the image sequence are missing, you will encounter exactly such a freeze."

In this article: ar, av, gadgetry, gadgets, galacticattack, gaming, gearvr, hands-on, oculus, samsung, simulatorsickness, sixflags, sixflagsgalacticattack, videogames, virtualreality, vr
All products recommended by Engadget are selected by our editorial team, independent of our parent company. Some of our stories include affiliate links. If you buy something through one of these links, we may earn an affiliate commission.