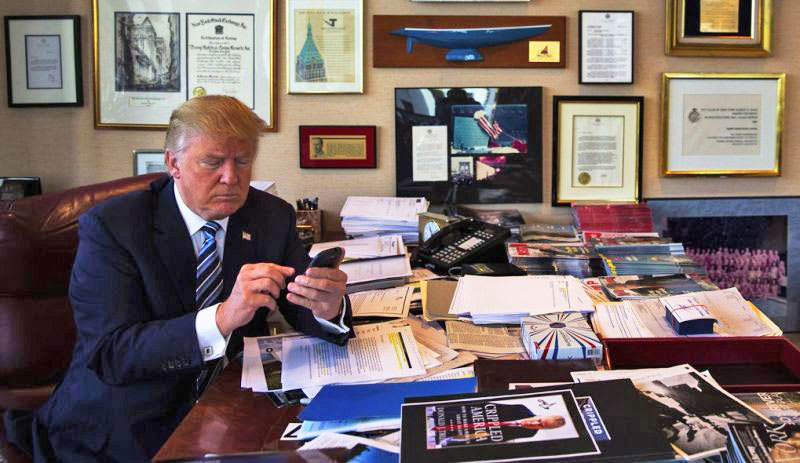 After a wealth of hacking concerns, the President has finally swapped his unsecured Android handset for a new iPhone. The White House director of social media -- Dan Scavino Jr. -- tweeted yesterday that Trump has now been using his new Apple device for the past couple of weeks. After recent tweets from the POTUS account marked as sent from an iPhone raised questions, this new information now confirms their authenticity.

.@POTUS @realDonaldTrump has been using his new iPhone📱for the past couple of weeks here on Twitter. Yes, it is #POTUS45 reading & tweeting!

With the leader of the free world privy to all kinds of sensitive information, Trump has been criticized in the past for using an off-the-shelf, unsecured Android phone. While it was originally reported that he'd parted with the phone before his inauguration, it later came to light that the Republican leader still used it to send tweets. With retail phones easily hackable, the President's reluctance to use a more secure handset scared his colleagues, eventually prompting letters of complaint from members of Congress.

While more secure tech is always advisable, Trump's hostile attitudes towards Apple in the past make his new choice of phone surprising. With the outspoken tech company often critical of Trump's administration, he even once called for a boycott of their products. Now, it seems this once-important feud was short-lived. If this tweet is anything to go by, however, it looks like Trump may not have completely abandoned his old device just yet.

Although the President's new iPhone may be more secure than what he had previously, Trump still remains an increasingly high-risk target for hackers. In a bid to minimize attacks, Obama opted for an incredibly basic locked down "play phone" (which later reports indicated was also an iPhone). Yet with Trump's brief term already incredibly tweet-heavy, it remains to be seen whether he'd sacrifice his Twitter habit for national security.

Via: The Verge, The Guardian
Source: Dan Scavino Jr. (Twitter)
Coverage: CNBC, Android Authority
In this article: android, apple, gear, ios, mobile, politics, security, TheWhiteHouse, trump
All products recommended by Engadget are selected by our editorial team, independent of our parent company. Some of our stories include affiliate links. If you buy something through one of these links, we may earn an affiliate commission.