When a company moves into a new product category, it's important to make a statement with that first device. Master & Dynamic has been designing some of the best-looking headphones you can buy for just under three years; today it's introducing its first speaker, the MA770. This isn't just any wireless speaker, though. Rather than using wood, plastic or metal for the primary material on the MA770, Master & Dynamic chose concrete. That decision led the company to develop its own composite and collaborate with world-renowned architect Sir David Adjaye on the design. Sure, concrete speakers have been done before, but Master & Dynamic went a step further. The company developed a proprietary concrete composite, which it says provides increased damping and lower resonance. The final form of the MA770 is one solid molded piece. In fact, Master & Dynamic's chief product officer Drew Stone Briggs told me the damping properties of this concrete composite are five times better than wood and 10 times better than plastic.

"We set out to use concrete not just because it's cool, but we liked it for the ability to completely control every aspect of it," he explained. "Not only can we control it for sound-dampening and to make it a much better acoustic enclosure, since it's our material, we can change every aspect of the tuning. That's what makes it special."

The increased damping means you can position a turntable close to the MA770 and crank the volume up without worrying about the record skipping. 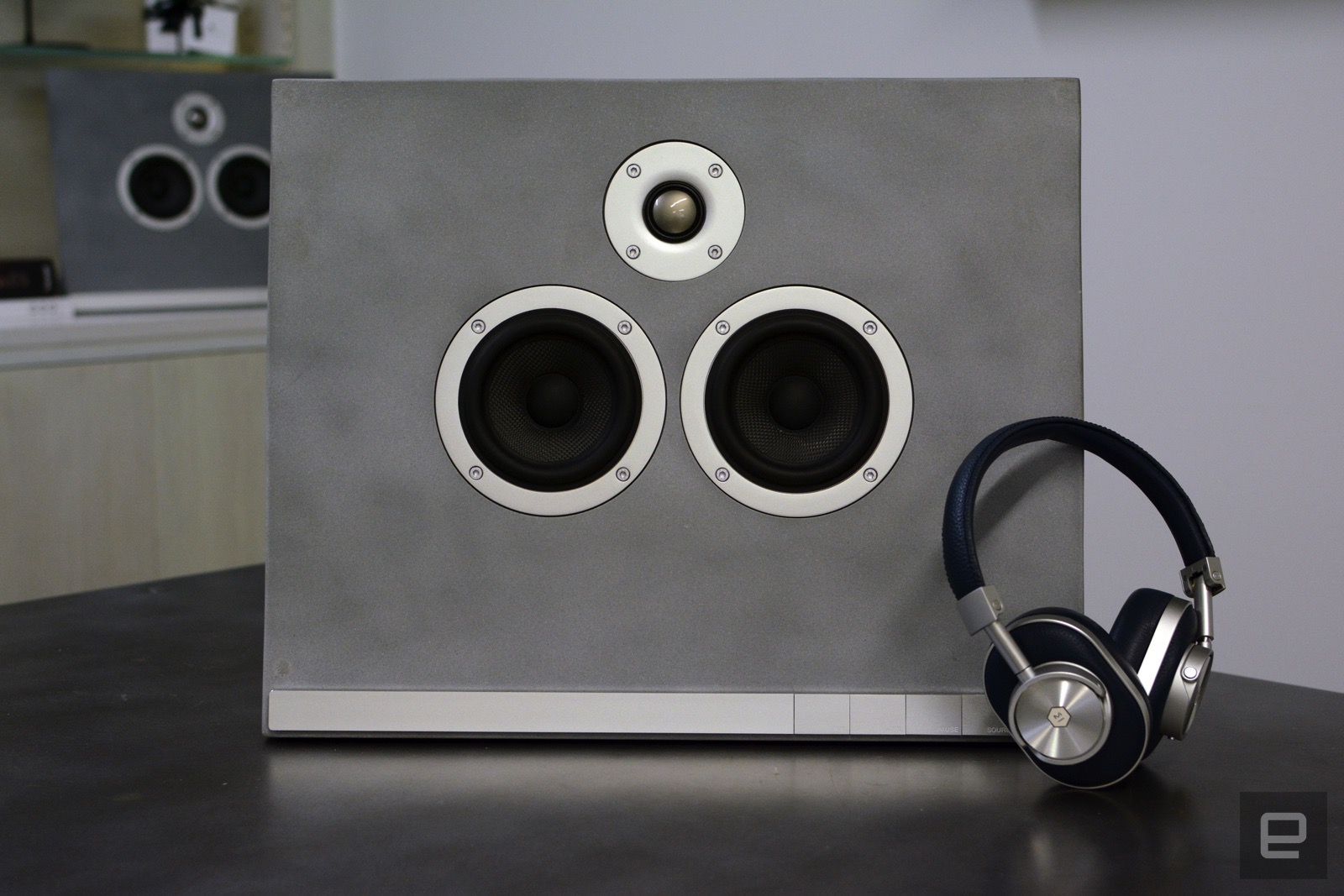 The MA770 is, unsurprisingly, a beast of a wireless speaker. It sits 20 inches wide by 16 inches tall and weighs 35 pounds. Yes, that heft is because it's made of concrete. That's also only a smidge lighter than the Sonos Sub, that company's beefiest speaker. While it sounds like a huge device, it really isn't. When you first walk into a room and see one sitting on a shelf or in the middle of the table, it immediately grabs your attention, but not in an overly imposing fashion. It's the combination of shape and materials, rather than its size, that catches your eye.

Master & Dynamic's speaker is a collaboration with Ghanaian-British architect Sir David Adjaye. You might not recognize the name immediately, but you may have seen one of his recent projects: the National Museum of African-American History and Culture at the Smithsonian in Washington. Adjaye worked with Master & Dynamic on the overall design and shape of the MA770, using triangles to "break down the mass of the box" rather than keep with the convention of rectangular enclosures.

"He really understands how forms work and he works with concrete all the time," Master & Dynamic founder and CEO Jonathan Levine told me. "He was very involved. This isn't a project where he just assigns his name and hands it off." 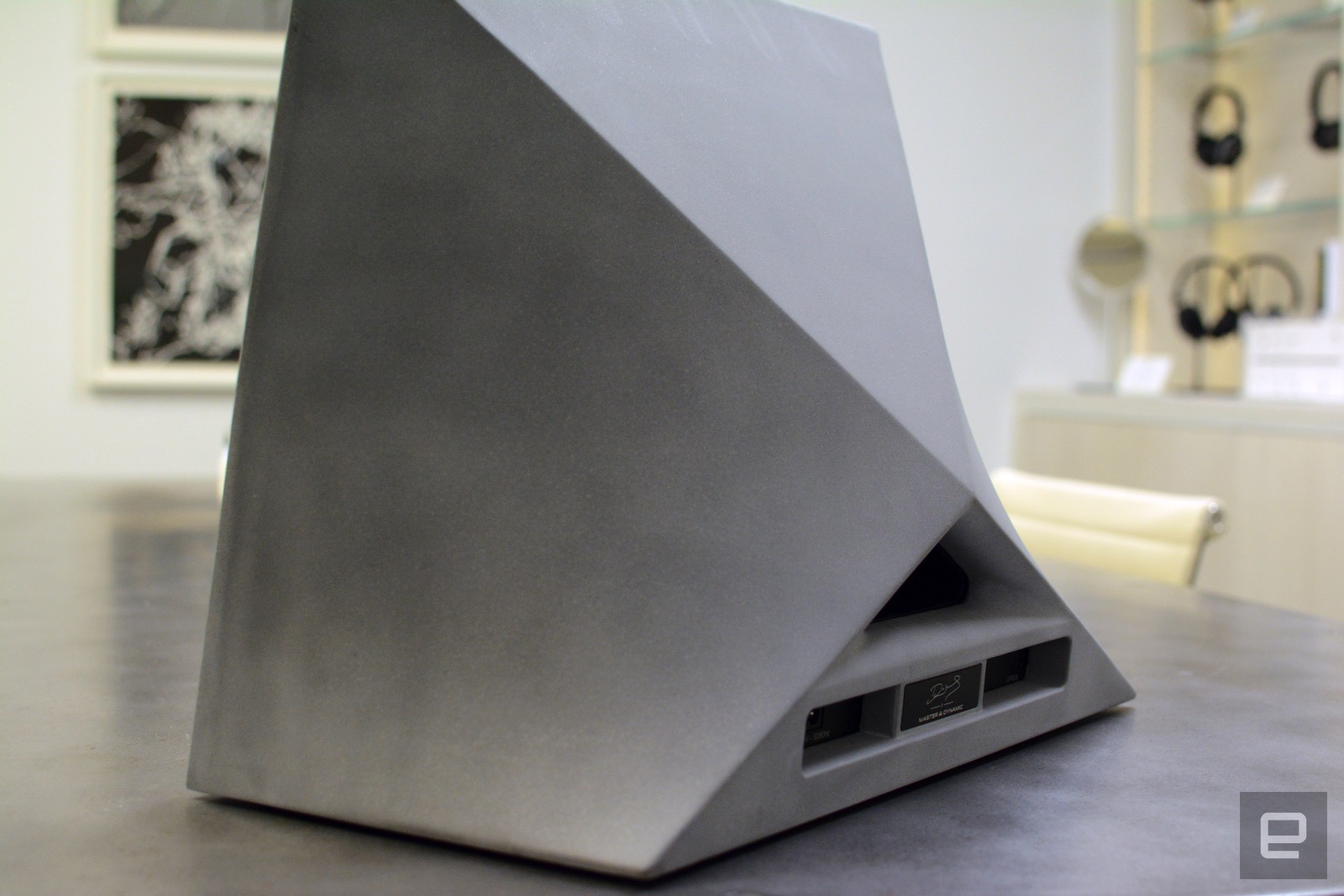 Adjaye created an angular geometric shape that not only gives the MA770 a distinct look but helps with the overall acoustic properties of the speaker. The architect uses a lot of angles and geometric shapes in his work and that certainly carries over here. In fact, there are some obvious aesthetic similarities between the exterior of the newest Smithsonian museum and Master & Dynamic's new speaker.

At a time when you can get wireless speaker that's small enough to fit in your pocket, the company is going big with its first offering. With Adjaye's experience designing large structures, it's no surprise the MA770 has a considerable size. In fact, creating something small and portable -- two big selling points for a lot of speakers these days -- wasn't on the table.

"The only parameters we gave to David were we didn't want a portable thing -- we wanted something with stature and scale," Levine continued. "And David did the majority of the design work." 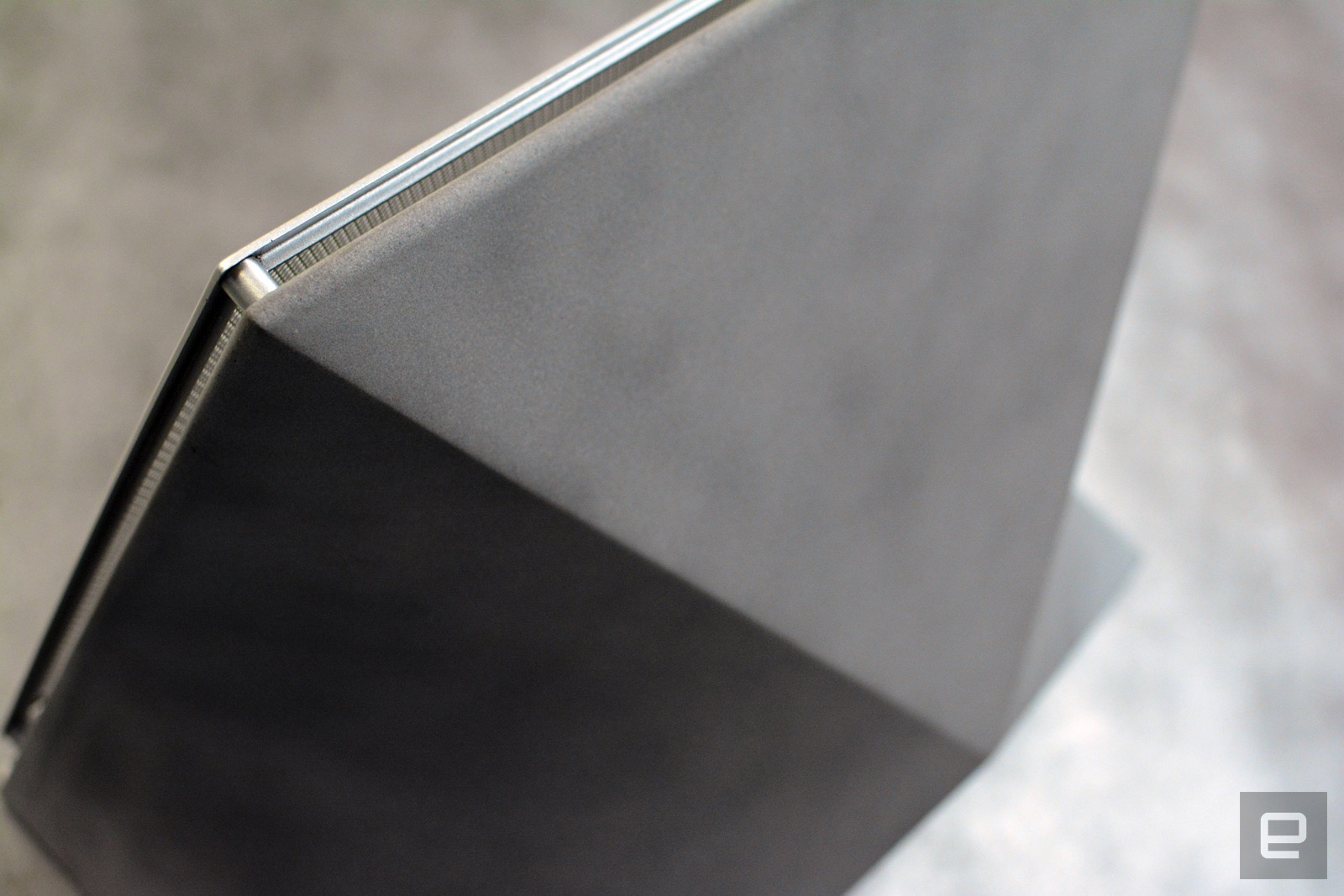 Aside from the concrete shell, Master & Dynamic opted for a magnetic etched steel grille to protect the speaker's components on the front side. The metal shields sensitive parts, and reminds me of the company's headphone designs. On models like the MH40 and others, Master & Dynamic combines steel and aluminum with leather to achieve its signature look. It's removable, which is a nice touch. The company gives you the option of covering those dual woofers and tweeter or leaving the smooth concrete surface exposed.

The controls on the front of the speaker are also situated on a metal strip, but all the text is in white, so you can't see them unless you're standing right at the speaker. This attention to detail gives the MA770 a seamless facade rather than a front panel that's littered with controls and icons. There are buttons for switching between audio sources, play/pause and volume adjustments.

As far as connectivity goes, the MA770 has a 3.5-inch auxiliary port and an optical input around back. It's also equipped with Bluetooth and WiFi for wireless audio streaming. Thanks to that internet connection, the speaker features Chromecast built-in to easily connect to all of your go-to apps. The decision to go with Google's audio standard means that MA770 is not only a breeze to set up but Master & Dynamic won't clutter up your phone with a dedicated app just for its speaker. There's no AirPlay option, and Apple Music doesn't support Chromecast, so that's something to consider if you're a fan of that particular service. 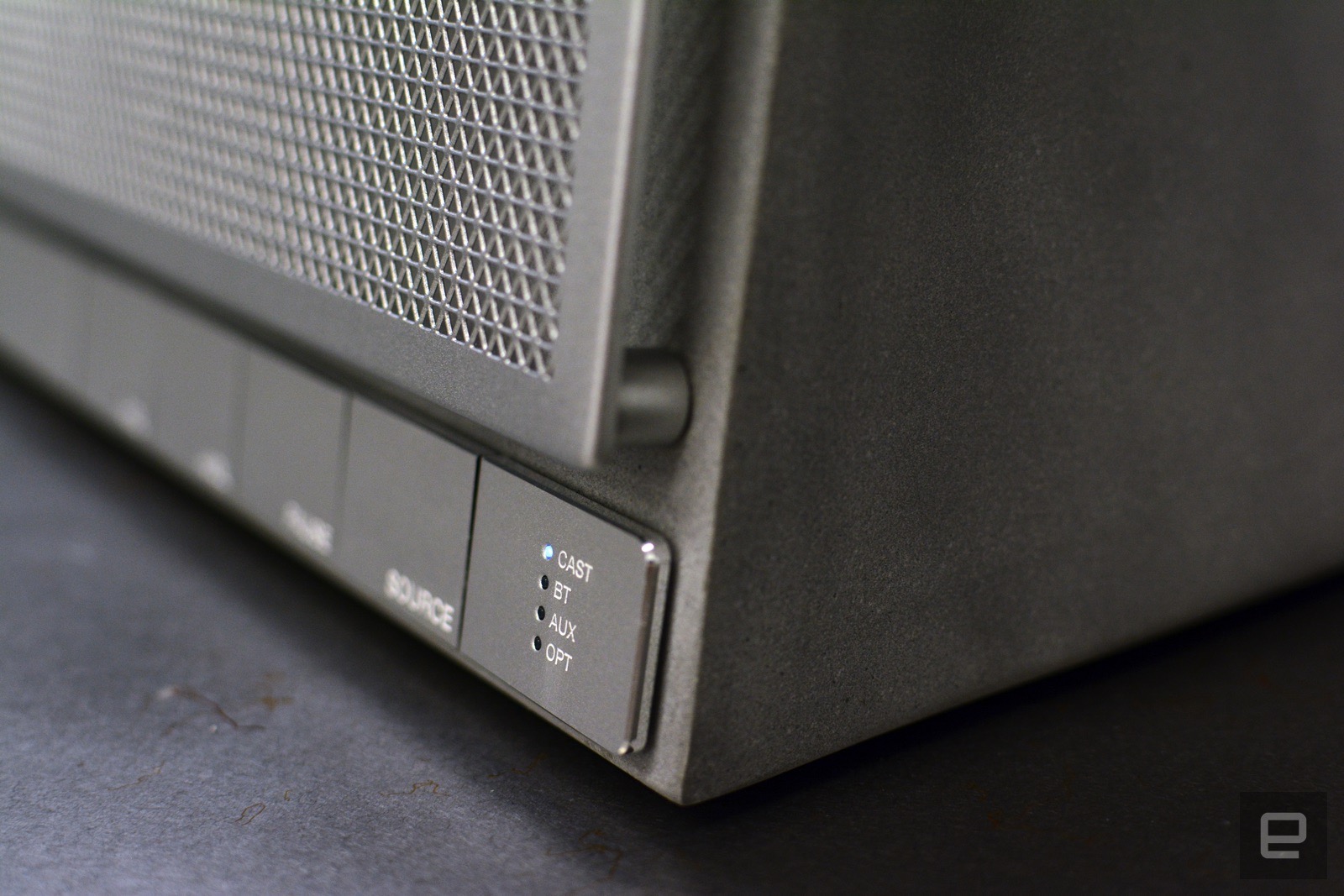 "[Chromecast] allows us to focus on what we do well," Stone Briggs explained. "We thought about an app, but not for very long." He said that while the company is certainly capable designing its own software, everything it needed for the speaker -- setup, connectivity, multiroom audio and more -- is already supported in Google's platform. That meant there really wasn't a need to create a companion app.

Speaking of Chromecast, the MA770 is the first wireless speaker to use Google's connectivity tool for stereo pairing. You could already use Chromecast to group speakers or a set up multiroom configuration, but now you can use it to use two speakers in stereo. This means that if you have two speakers, you can opt for true left and right channels in a room rather than just grouping them for louder sound.

In terms of audio, the MA770 carries the trademark Master & Dynamic sound profile that doesn't futz too much with the EQ from what the artist intended. What you get is a more natural sound where highs, mids and lows are all equally represented. There's enough bass for genres like hip-hop and others, but it never comes close to being overwhelming. The company said it still has some work to do for the final sound, but even at the not-quite-finished stage, the audio and power on display here is pretty damn impressive. 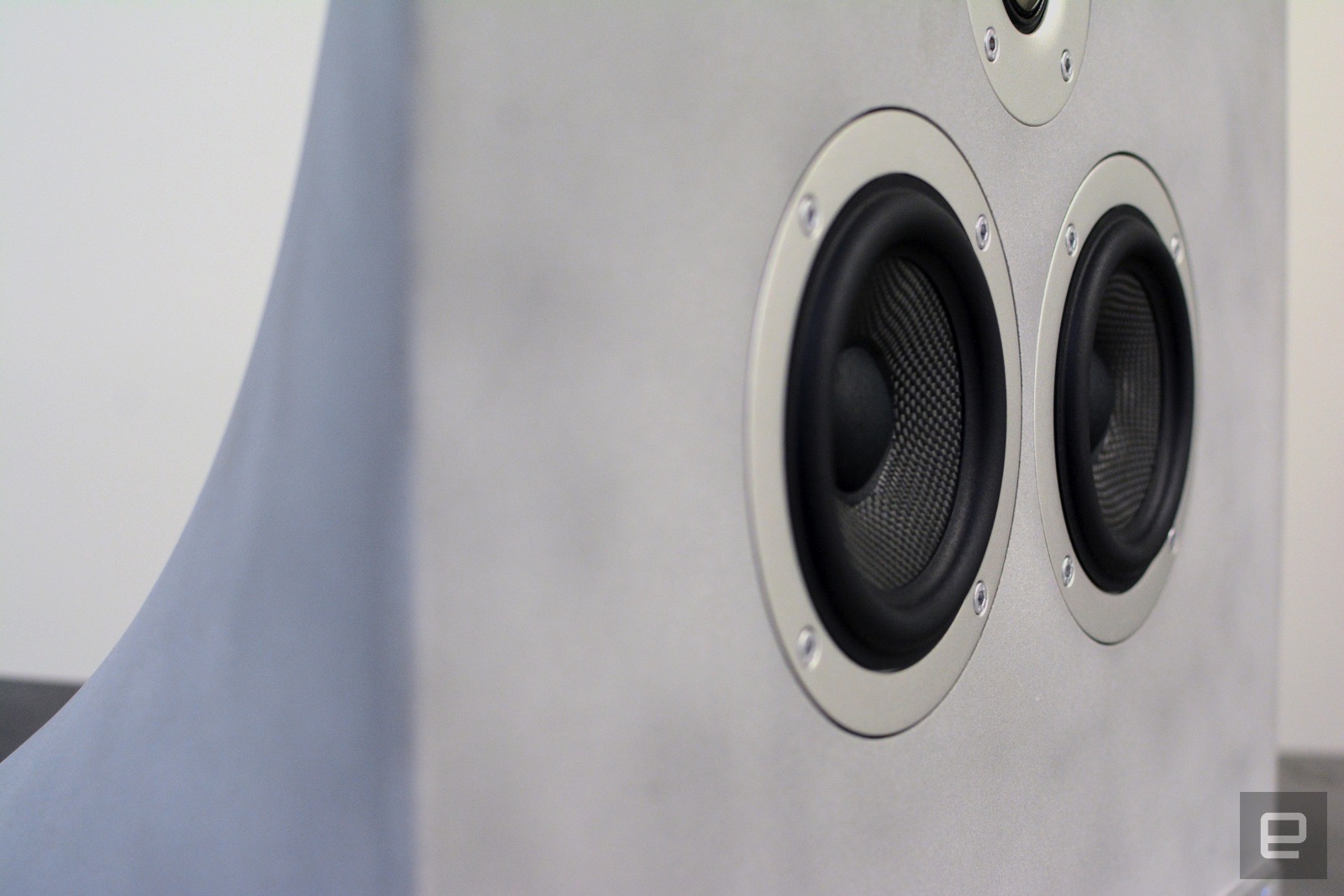 Vocals are also prominent in the sound profile. This was evident even in grungy early '90s rock songs, where the words tend to blend in with the distorted guitars and pounding drums — I could hear Scott Weiland's throaty growls a bit clearer on "Dead & Bloated" over the MA770 than I typically can on a set of headphones. It's not a huge difference, but it's noticeable, and for some genres is actually quite nice.

As you might expect, a premium speaker that's made out of concrete commands a premium price. The MA770 will set you back $1,800 when it arrives in the middle of next month. If you really want to make sure you can get one, Master & Dynamic is taking preorders starting today. Of course, a near-$2,000 asking price puts the company's first speaker on par with the likes of Bang & Olufsen when it comes to cost. Like B&O, Master & Dynamic considers its speaker somewhat of a showpiece -- a piece of art rather than just some audio gear.

Despite the unique mix of design and materials, the MA770 still costs much more than what you can get from Sonos and others. For example, $1,800 is enough to cover a Playbar, Sub and a pair for Play:1 speakers from Sonos. There's also the more-compact Play:5 for $500. Master & Dynamic is going after people who want something that's not mass-produced or available everywhere. This is a high-end device, and to get one you'll have to be willing to pay a high-end price.

"I had this idea that someone buys it and it becomes the centerpiece in their living room," Levine said. "Eventually it becomes a family heirloom that their kids ask to take with them when they move out of the house." He compares it to what a turntable was years ago; many people recall that setup as focal point in the home. Tech moves a lot faster these days, so it could be tough to fill that void with a wireless speaker. 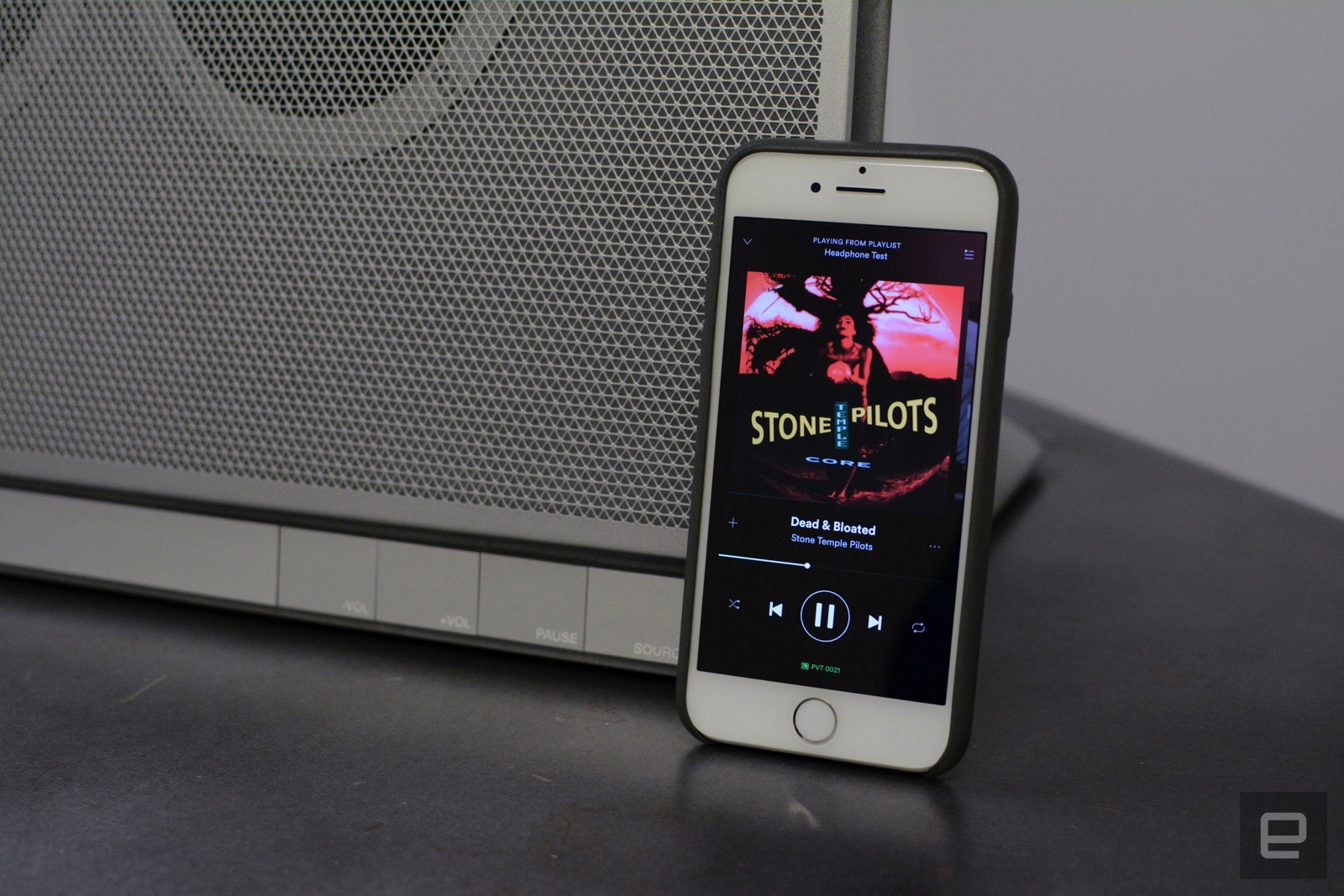 That price may be a turnoff for many, but what Master & Dynamic has built here is still a compelling package. Aside from using its own type of concrete to enhance the acoustic properties of the speaker and simple operation with Chromecast, the MA770 stands out in a product space that's dominated with plastic, wood and metal. The architectural aesthetic under Adjaye's direction breaks from the round and rectangular boxes we're used to seeing with speakers. If the MA770 is a sign of things to come for speakers from Master & Dynamic, it will be interesting to see what shape those future devices take.

Source: Master & Dynamic
In this article: audio, av, chromecast, concrete, gear, hands-on, MA770, masteranddynamic, masterdynamic, speaker, wirelessspeaker
All products recommended by Engadget are selected by our editorial team, independent of our parent company. Some of our stories include affiliate links. If you buy something through one of these links, we may earn an affiliate commission.