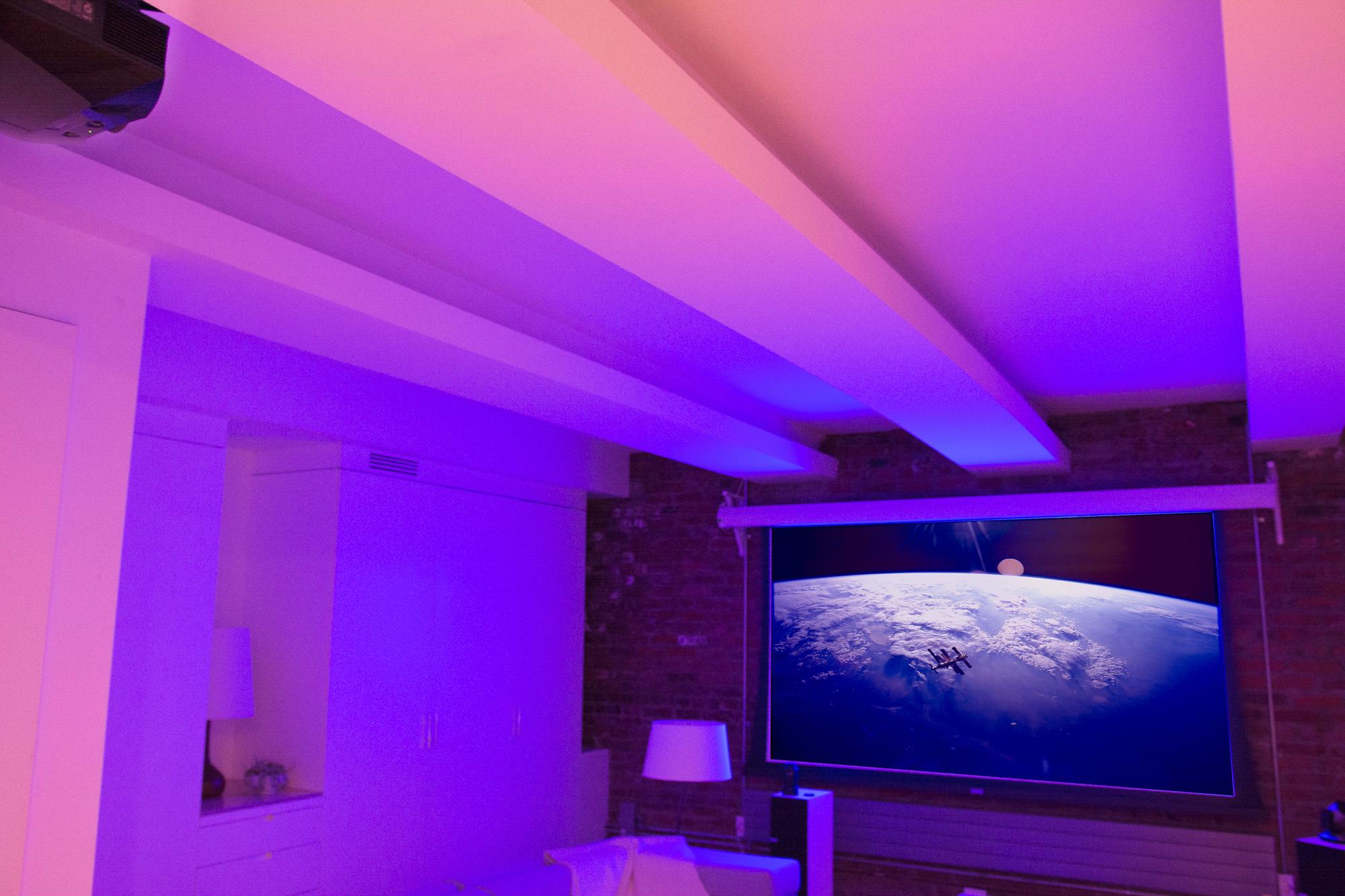 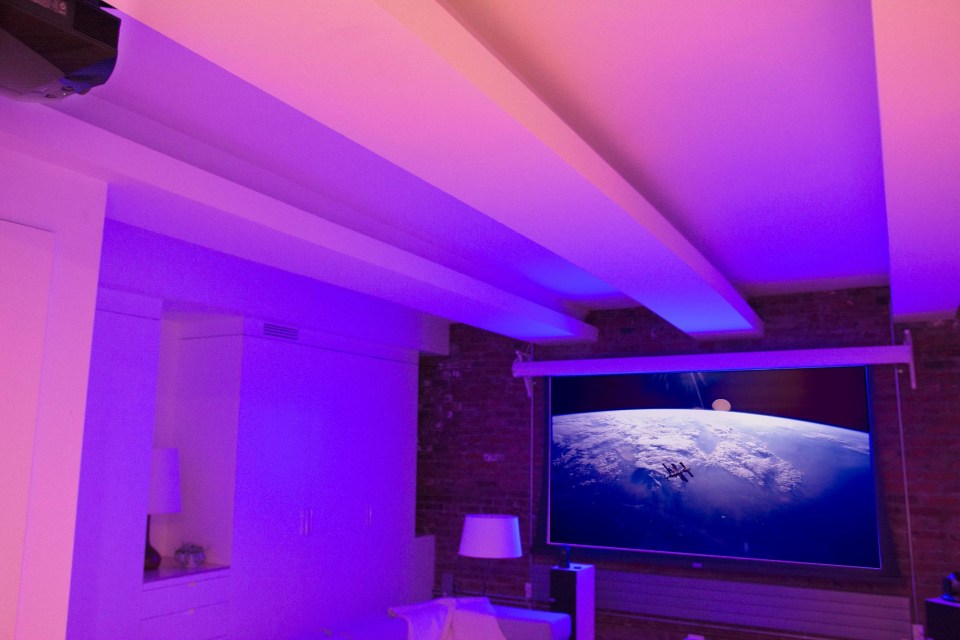 Everyone loves watching a great movie on a big screen with a kickass speaker system, but few would complain about losing the sticky floors, uncomfortable seats, and kids with smartphones (unless they're your own kids). Our A/V team spends thousands of hours each year to find the best-looking and -sounding home theater equipment. Whether you have a dedicated theater room planned or are thinking of upgrading your weeknight living room movie night, we have recommendations covering whatever space and budget you have.

If your room is large enough (you can check using this calculator) and you want the best picture quality, we heartily recommend the Sony VPL-HW40ES. After testing five leading models in the same price range, our projector guru Geoff Morrison concluded that the Sony offers the best combination of performance and price. It's easy to install, has accurate colors, and creates very little noise (which is great if you have a small room and the projector is mounted above your head).

A good home theater screen should reflect the right amount of the projector's light back at you and accurately reproduce colors, but shouldn't create hot spots, shimmer, or blind you. That's not always an easy task, as our home theater screen tester Chris Heinonen discovered when he tested 10 screens in his home theater. He also found out that price isn't necessarily a predictor of performance and concluded that the bargain-priced 100-inch Silver Ticket screen was the smartest option for most home theaters.

The AV receiver is the hardest-working component in a home theater. If you're planning on a 7.1 surround system or you want to power a second zone of stereo speakers, we think the Denon AVR-S730H is the best home theater receiver for you. Compared with the other models we tested, the Denon was extremely easy to set up and use. It offers great sound quality even at high volumes, and has tons of streaming features. It also has six HDMI inputs, and one HDMI output.

A great-sounding home theater doesn't need the biggest or the loudest speakers, just the best ones for your room and budget. We set out to find the best 5.1 home theater speaker system without going over $2,000, and eventually settled on the ELAC Debut system. They have a smooth, natural balance and deftly handle quiet scenes and outbursts of action. You can also calibrate the subwoofer to your room's shape, an uncommon feature for subs in this price range.

Selecting a ceiling mount for your projector can be complicated, though you may get lucky the first time. The problem is that one best mounting kit doesn't really exist because there's no industry-wide standard for mounting patterns. That being said, our personal favorite projector mount is the Omnimount PJT40. It's the closest we've found to a true universal mount, having used it to mount multiple projectors. The Omnimount is a cinch to install, and you can easily make fine adjustments. A Blu-ray player, spinning Blu-ray discs, is going to provide the best video and audio for your home theater. Most current Blu-ray players are fairly equal when it comes to video and audio quality. Some, like the Oppo BDP-103D, use video processing magic to improve contrast and detail. Often processing like this causes more harm than good, but the Oppo performs admirably. However, it's quite expensive. If you're looking for a cheaper option, we suggest the Sony BDP-S3500. Even though a Blu-ray disc provides a better picture and better audio than streaming services, we know most people depend on streaming for most of their viewing. And although lots of your other devices come with streaming services built in, we still think the best way is a stand-alone media player. We've tested them all, and think the Roku Streaming Stick is the one you should buy. It's very customizable and easy to use, with a large content selection. The remotes that come with your devices usually do a decent job of operating them, but if you've got a bunch of gear and have ever done the remote shuffle just to watch a movie, you can understand the appeal of a universal remote. There's very little competition anymore, so these days, our reviewers are mostly comparing different Logitech Harmony products against each other. They settled on the midrange Logitech Harmony 650 as the best universal remote for most people. It can control up to eight components at a time, and can connect with more than 6,000 different products.

After testing 11 leading indoor TV antennas, we recommend the newest version of the Antennas Direct ClearStream Eclipse as the best indoor antenna for most people who live within 20 miles of their broadcast towers. In both our urban and suburban tests, the Eclipse pulled in all our target channels easily. And its Sure Grip tack system lets you quickly attach it to a wall without any hardware.

You're going to need a few HDMI cables for your home theater, just don't pay too much for them. We think you should buy the Monoprice 6105 six-foot HDMI cable because it can transmit any current audio or video standard, including Ultra HD 4K video, has Ethernet data and Audio Return Channel capabilities and costs less than $1 a foot. There's no reason most people should pay more than that. Sometimes your TV or projector sits too far away from your source devices or is separated by obstacles, so a wireless approach seems best. If that's the case in your home, we think you'll like the IOGear Wireless HD Digital Kit. This system includes a transmitter with two HDMI inputs to connect to your sources and one receiver to connect to your display. It uses WHDI technology, which can easily travel through walls and other obstacles with no noticeable signal degradation.

Don't believe the hype spread by high-end speaker wire manufacturers. Yes, you need good speaker wire for your home theater system, but you don't need to spend a ton of money for it. We assembled a panel of experienced audio reviewers and asked them to conduct a blind listening test on a wide assortment of speaker wires using a blind listening test. They found the Monoprice 2747 12-gauge sounded great, even better than a high-end wire costing 100 times more. One of the least fun (but potentially most important) devices for your home theater is the surge protector. We spent 30 hours testing leading models to determine that the Tripp Lite TLP1008TEL is the best surge protector for most people. It includes 10 well-spaced outlets (four big enough for large wall-warts), which should cover all but the most extreme home theater setups. We also liked that it stops delivering power when the protection circuit is worn out.

Sometimes you want to enjoy your home theater while other people are asleep (or maybe even just doing something that requires quiet). Unless your theater room is soundproofed, wireless headphones are the way to go. After researching 32 models and putting 14 through extensive testing, we think you should get the Power Acoustik Fahrenheit HP-902 RFT. We thought they struck the right balance of sound quality, value, and user-friendly features.

In this article: AntennasDirect, av, clearstreameclipse, Denon, gear, harmony650, hometheater, iogear, logitech, monoprice, omnimount, oppo, partner, PowerAcoustik, roku, rokustreamingstick, silverticket, sony, syndicated, thewirecutter, tripplite, wirecutter
All products recommended by Engadget are selected by our editorial team, independent of our parent company. Some of our stories include affiliate links. If you buy something through one of these links, we may earn an affiliate commission.