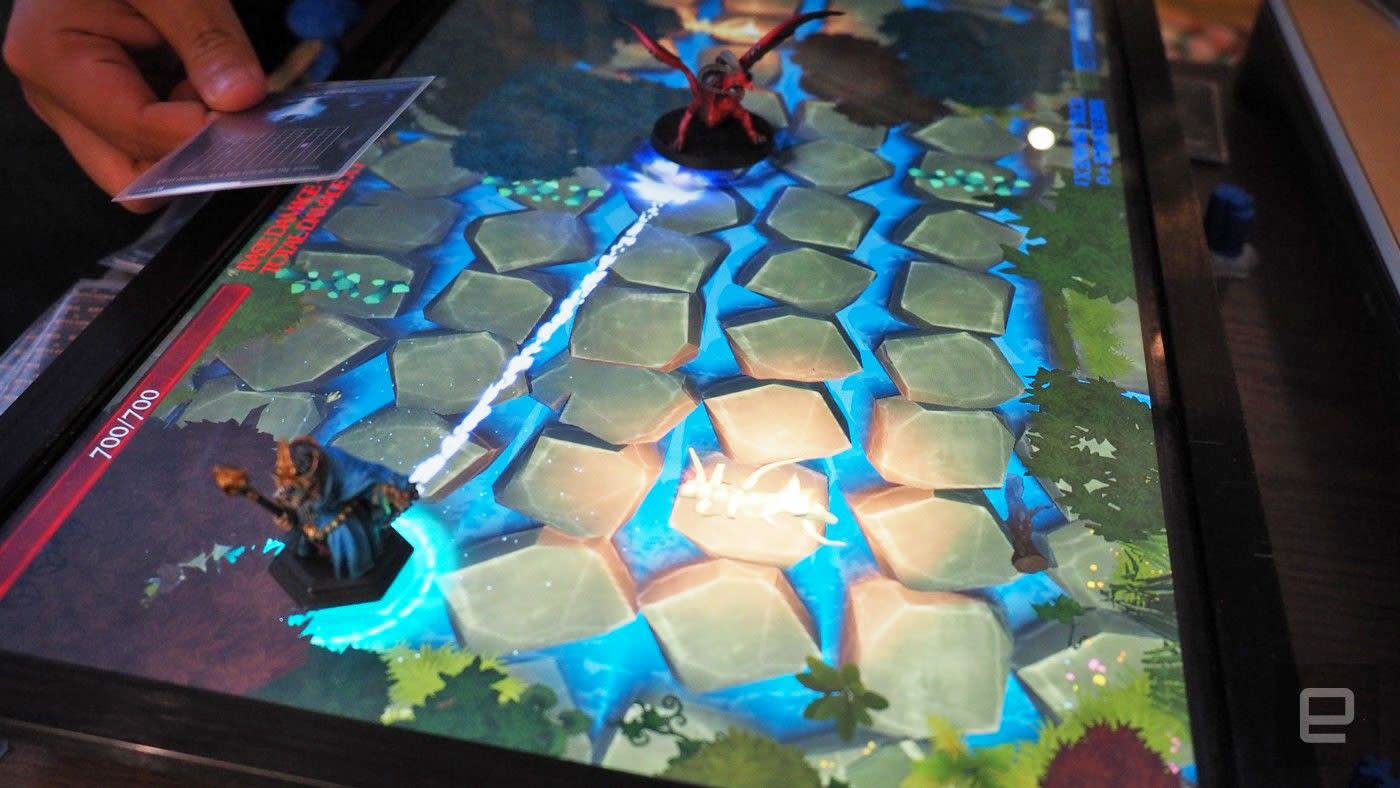 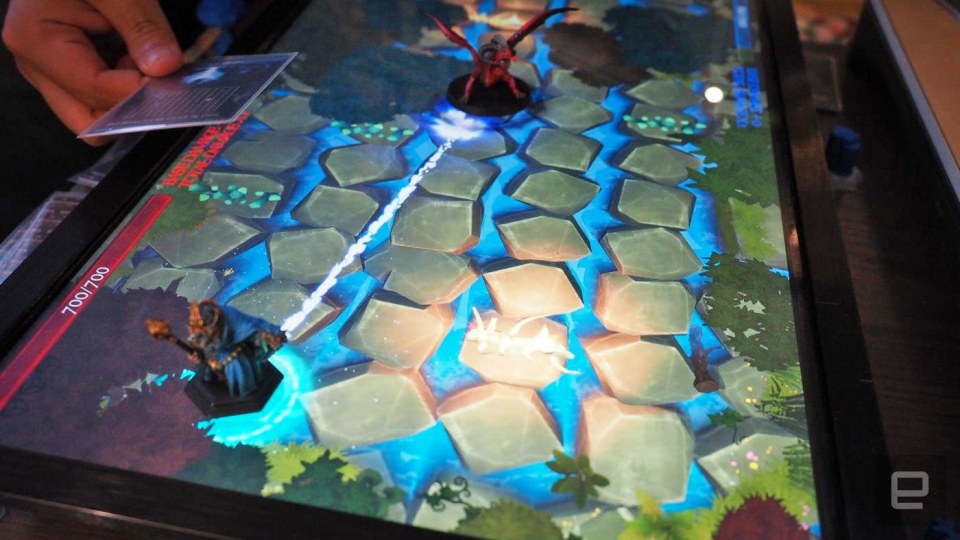 Whether they're taking over a section of your local Target or dominating the list of Kickstarter's highest grossing projects, board games are booming right now. And, while traditional board games still have their place, plenty of companies are trying their hands at augmenting tabletop play with websites and apps, or building products that incorporate physical pieces into video games. Blok.Party's PlayTable takes all of that a step further by building a giant tablet to serve as the game board and letting users create their own RFID-enabled pieces that incorporate blockchain tech for a truly personalized gaming experience. The PlayTable itself is essentially a giant 24-inch full HD touchscreen running its own "PlayTable OS." The demo units the company has been showing for the past two years were run on Windows, but the Blok.Party team is working on porting it to Android, and that's what the final production units will use. Because it's meant to live in your living room or den, the PlayTable isn't designed to be portable -- it's 12 pounds, needs to be plugged in and largely depends on a WiFi network to function. That might be a bit of a bummer to any tabletop gamers who were hoping to lug the device to their local shop or a gaming convention but, if they do try it anyway, at least the size and weight aren't much worse than carrying around a bag of board games or backpack of RPG manuals. 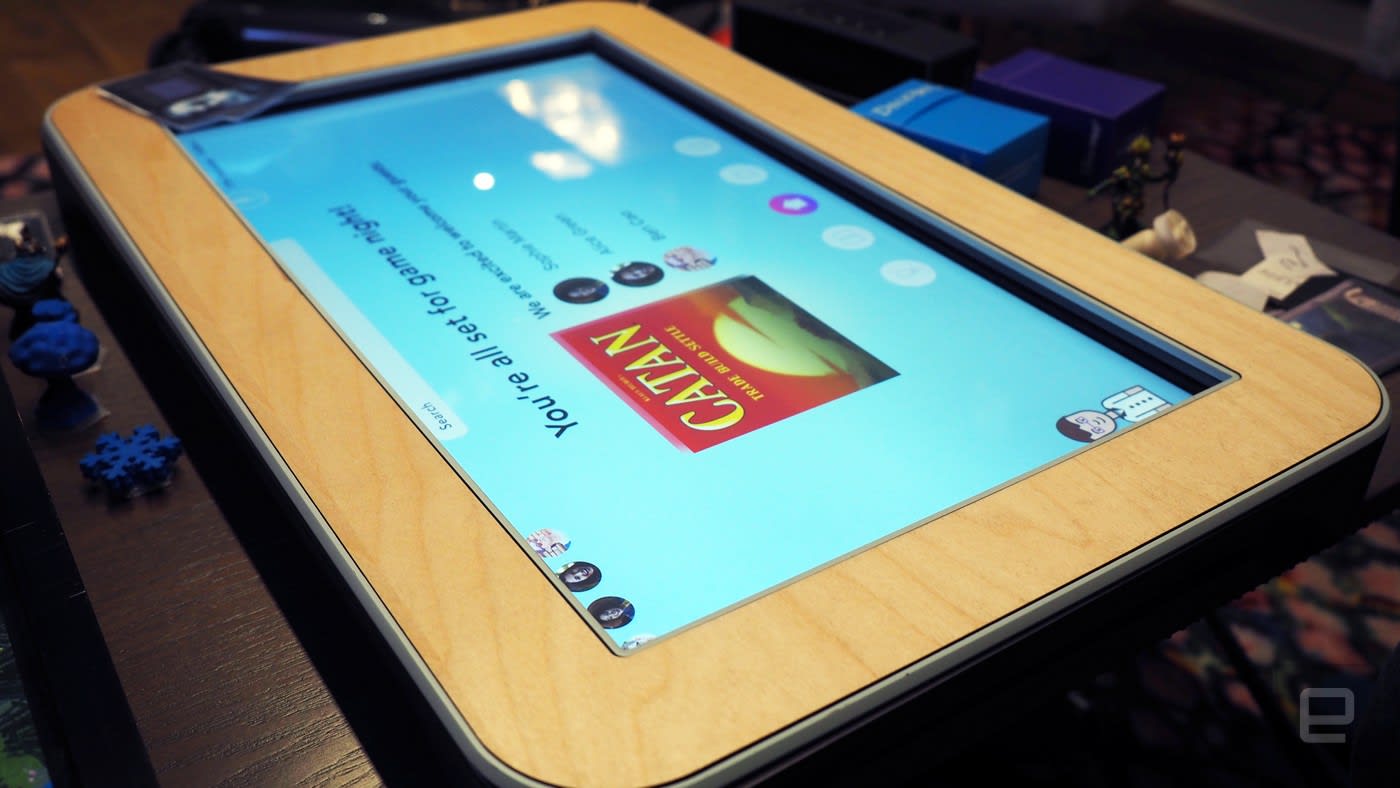 The PlayTable has a few nice touches to make it family room-friendly: There are four USB ports for charging phones and other devices, and the device itself is designed with an interchangeable faux-wood finish so it doesn't clash with your decor. Blok.Party also plans on accessories like a cover for the screen when the device isn't in use. Most importantly, the entire thing is incredibly tough, with industrial-strength glass and an IP54 rating for water resistance -- you could even rest your drinks on it, something most players would never dream of doing to a cardboard game board. Heck, your beer glasses can even be the game pieces if you like, thanks to the system's RFID-based game piece system.

Although some of the games will have physical components for sale, what Blok.Party is really hoping for is for people to buy RFID stickers instead. There are obvious business-related reasons for this: Toys are a pain to manufacture and distribute, something that Nintendo learned the hard way when it first started selling Amiibo more than three years ago. But the company is also embracing a DIY ethos with the PlayTable, one where it envisions users 3D printing its own figurines or even using favorite toys as game pieces. To ensure these components are truly unique but still work across various games, the company is embracing blockchain. 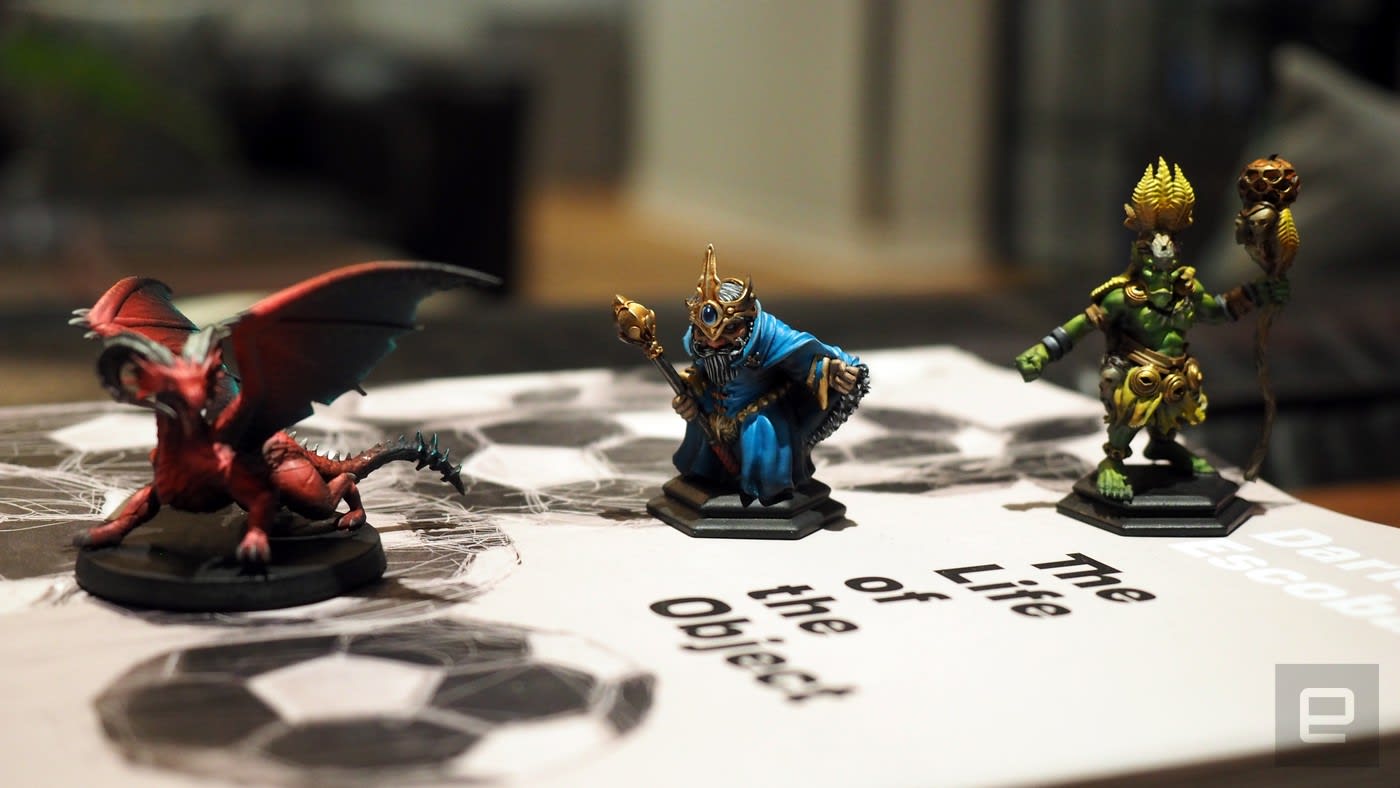 When you hear the term "blockchain" you tend to think of Bitcoin and other cryptocurrencies, which ideally represent a secure, decentralized form of payment but lately have been reduced to a buzzword for individuals and companies aiming for easy money. Blok.Party isn't looking to mine anything -- for starters, the PlayTable's Rockchip CPU and 2GB of RAM aren't exactly up to the challenge. Instead, the usage of blockchain is all about authenticating the pieces, without the company needing to build a central server or keep additional records beyond basic account info.

The components will have data associated with them, like what games they've played in and the stats they've earned. But, unlike Amiibo, that data will not be stored on the piece itself, which makes it more immutable: If a piece is lost or stolen, it'll be easy to recreate it on a new RFID chip and invalidate the old version. And you'll never have to worry about fakes when trading with other people. It's an authenticated digital collectible like CryptoKitties, except that it serves a slightly more practical purpose. You don't just have it for the sake of having it, but also for the purpose of playing games with it. 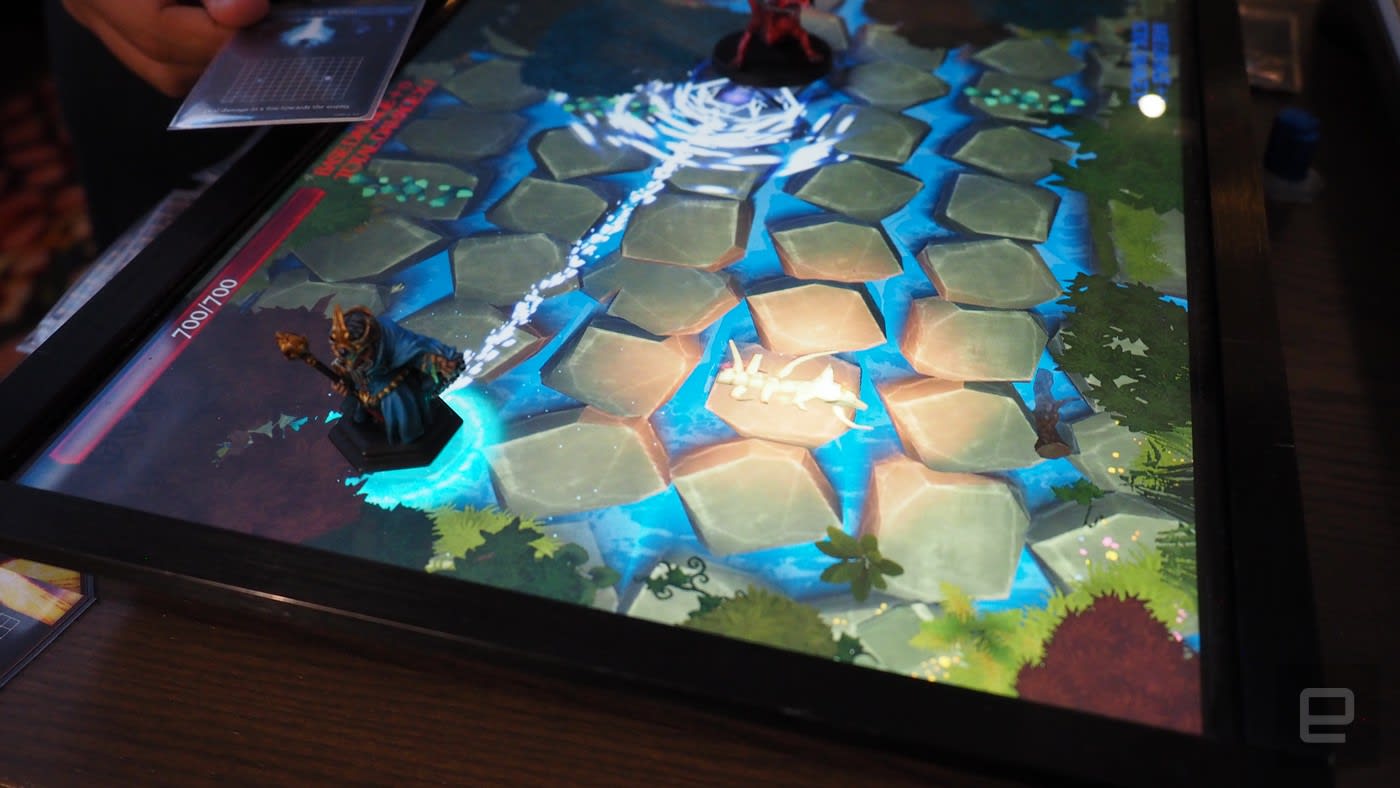 At launch, the PlayTable will have about 25 games available, including classic and popular titles like Catan, Ticket to Ride and Codenames, as well as originals like Battlegrid. Battlegrid is a hybrid miniature and card strategy game, with players controlling figurines like a dragon or a wizard on a grid with special RFID-enabled cards. The cards represent basic actions like movement and attacks, from ice beams to teleportation. There are also special physical pieces that add environmental effects on the board, like trees to create cover or a snowflake that will blanket the field with blizzard. There's even a bomb that shuts the game down entirely!

These non-player pieces show that not every PlayTable piece has to be complex or uber-exclusive. Chances are the majority of PlayTable components will be fairly generic, like a set of chess pieces or checkers. This goes nicely with the fact that most of the players probably will not be hardcore tabletop gamers; Blok.Party CEO Jimmy Chen says that half the people who signed up for the mailing list were parents looking for a way to spend time with their kids. 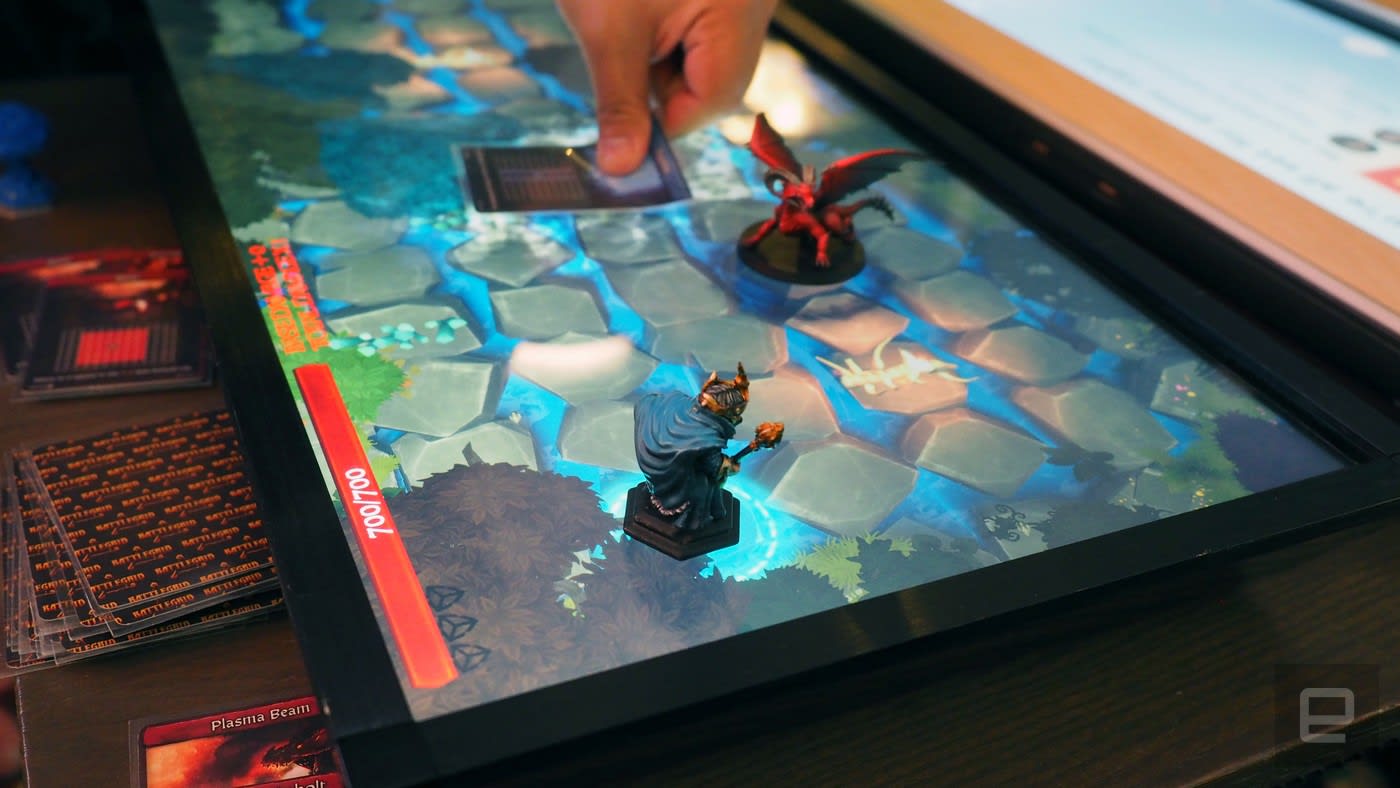 The PlayTable is expected to come out this fall, with an introductory price of $349, down from its intended MSRP of $599. It'll come packaged with a few games like Battlegrid, while other titles will be available through the PlayTable store ranging from a few bucks to as high as $35. For some titles, that higher price includes the components, putting it on even ground with many regular cardboard and plastic games. But others might be standalone experiences, which means they're more comparable to buying a console video game. Either way, tabletop gamers will appreciate the ability to build a board game collection that won't take up much room, and not having to worry about losing irreplaceable pieces like their favorite fire mage again.

In this article: av, battlegrid, blockchain, blok.party, blokparty, boardgame, boardgames, cardgame, entertainment, gadgetry, gadgets, gaming, hands-on, home, playtable
All products recommended by Engadget are selected by our editorial team, independent of our parent company. Some of our stories include affiliate links. If you buy something through one of these links, we may earn an affiliate commission.