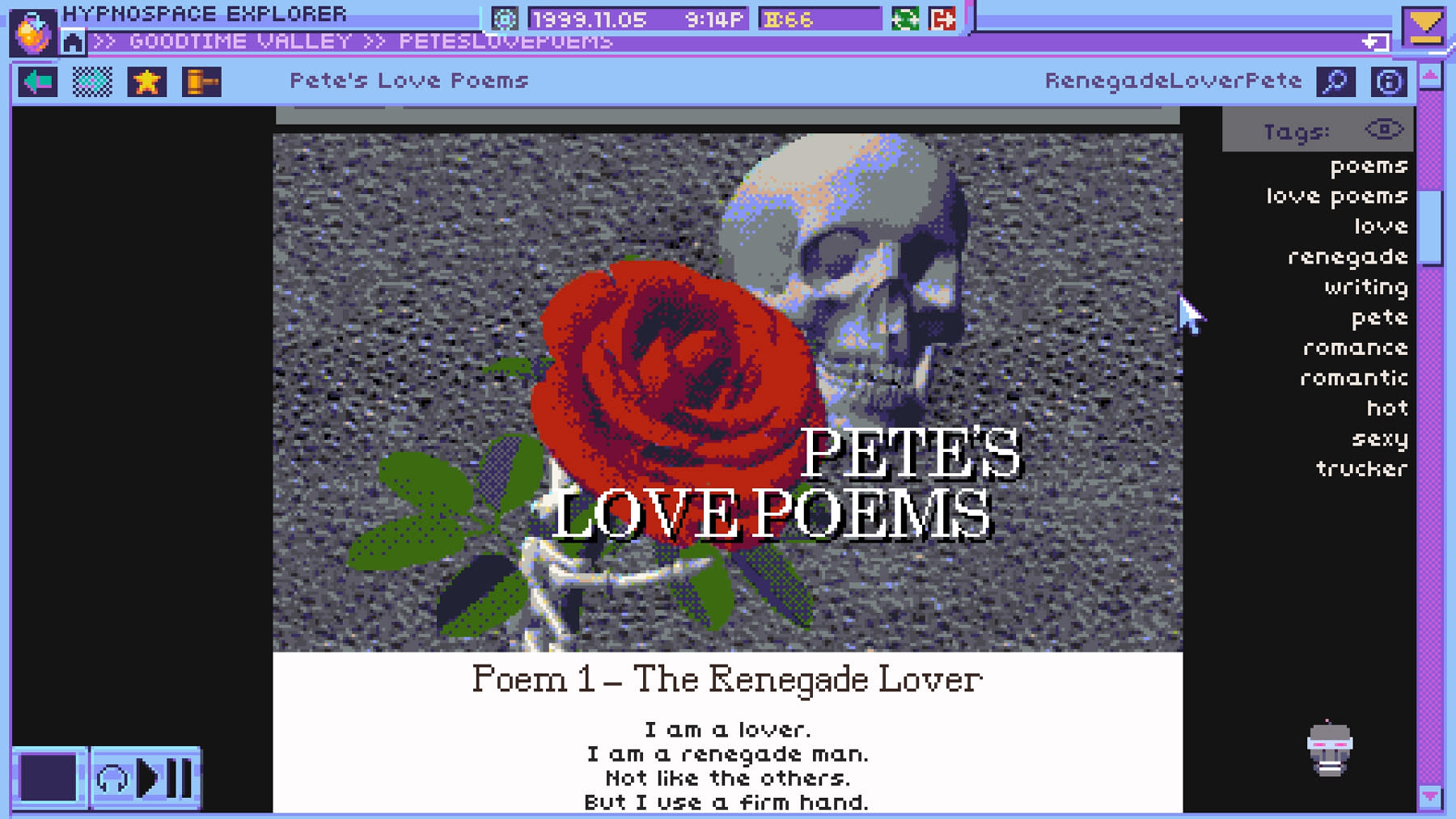 If you used the internet in the mid-to-late 90s, you probably remember GeoCities. Bright, garish webpages full of animated glitter and barely readable text. It was a different time, before Facebook, Twitter and anything resembling an ephemeral 'story.'

The old web-hosting service is now the inspiration for an upcoming adventure game called Hypnospace Outlaw. It takes place in an alternate reality where the internet -- known as the Hypnospace -- has evolved around archaic but deeply personal web pages. You play as a lowly internet janitor moderator person who has volunteered to patrol the platform in exchange for a virtual currency known as Hypno Coin. It can only be spent, however, on upgrades for your clunky Hypno OS computer.

Throughout the game, you'll receive automated messages about Hypnospace "violations." You're then tasked with finding the pages and corresponding users that are breaking the company's rules. Each investigation is a unique text-based puzzle. The process and solutions, of course, are a mystery for now. In an interview, developer Jay Tholen hinted that page tags and a search engine will play a crucial role, however. "There are other weird ways to solve the puzzles," he said, "but I don't want to spoil the conceits of those."

The allure of the game, though, is undoubtedly its nostalgia-fueled aesthetic. Each page is littered with low-resolution GIFs and fonts that make Comic Sans look sophisticated. Many websites also have music that auto-play in the background, reflecting the tastes and personality of the page owner. You can customize the operating system with different themes and icon layouts. There's also a desktop helper similar to the iconic Clippy and Merlin Office Assistants. "I just felt like we needed it!" Tholen said. "This [game] wouldn't be the same without a weird desktop assistant hanging around."

"It's always fun to feel like you're on someone else's weird computer."

If you want to take a break from internet sleuthing, you can care for a Tamagotchi-style pet on your desktop. You'll have to pet, feed and dispose of its poop that clogs up your screen as dedicated icons, however. "If too much poop is hanging around, they'll get sick and die," Tholen said. "And then you'll have a gravestone that you can't remove from your desktop." It's a clear throwback to the Windows 95 and 98 era of personal computing. There's a ghostly trail, for instance, that follows your cursor around the screen, and a bunch of weird software you can download from legally dubious sources.

"It's always fun to feel like you're on someone else's weird computer," Tholen said. "The games I've played that let you do that... even if it's a little clunky, there's something strange, nice and interesting about just poking around someone else's system. Hopefully, that transfers [with Hypnospace Outlaw]."

Tholen was inspired to make the game after working as a telemarketer at a Squarespace-style website-building company. "It was very, very Geocities," he explained. The service was marketed to older people who wanted a website for their small business. "Or for their dogs," Tholen added. "There were lots of dog and cat websites." At the company, he also took on paid work that involved building a website to a customer's exact specification.

One of these projects, commissioned by a user called Psychic Elizabeth Claire, was for a website filled with references to the Bewitched cartoon. "She wanted me to use the theme song and everything," Tholen said. He tried to explain that this would be a copyright infringement, and generally a bad idea, but "Claire" was persistent. Eventually, Tholen gave in, believing that nobody of note would visit the site anyway. "And then she started annoying everyone," he recalled. Tholen later left the company, but not before giving his personal number to the client. One day, Claire left a voicemail that said she would walk into a church and "light a candle for you to break your neck" if Tholen didn't call her back.

"It was weird, and I felt a little guilty."

The company Tholen had worked for eventually blocked and canceled her account. The budding game developer then received a call from a young girl demanding an explanation for her mother's treatment. During the conversation, she explained that "Claire" could barely read. "And then a lot of stuff started to make sense," Tholen said. "Because a lot of the work had been writing down what she was saying to me." He started to look at their conversations differently. "It was weird, and I felt a little guilty," he said, "because maybe this was just some poor lady trying to do a hustle (online)."

These types of stories are explored in Hypnospace Outlaw. Over time, you'll learn more about the users you're investigating and how Hypnospace's policies are affecting them. "You'll also eventually be able to see some of their files that they don't think other people can see," Tholen hinted. In the real world, the developer believes that everyone is "infinitely interesting" with complexity that goes beyond their online persona. He has strived, therefore, to give each character a "crunchiness" with lots of hidden details to discover. "So they're not just a pastiche on a type of person."

Hypnospace Outlaw was successfully crowdfunded in September 2016. The game has changed substantially over the last 18 months, however. The original concept, for instance, had you chasing targets on a virtual Hypnospace Highway. It stemmed from an early prototype, Hypnospace Enforcer, which focused heavily on this fast, twitch-based gameplay. Tholen was coming off Dropsy, a traditional adventure game, and wanted to make something completely different. He also worried that Twitch was giving people few reasons to actually play adventure games themselves.

"Because [normally] there's no particularly unique feeling to playing it," he said, "or achievement, or any kind of creative input from the player. You're just doing the same exact thing that you saw the streamer do in an adventure game."

As development progressed, though, he realized the operating system could serve a similar role. Backers loved the customization aspect and wanted to explore both Hypno OS and the Hypnospace for themselves. The highway mechanic is still in the game, according to Tholen, but it will have a diminished role. "This game exists as a game within the game now," Tholen hinted. "Sort of. I don't want to spoil too much about it."

Hypnospace Outlaw will be released later this year on PC, Mac and Linux. It's being published by No More Robots, the same company behind Descenders and the Brexit-themed Not Tonight. Tholen says it's possible a special edition will come out later with a Hypnospace website builder and custom music generator. "Some version of the game so that people can mod it themselves and add their own fake internets," he said.

In this article: art, Dropsy, gaming, GeoCities, HypnospaceEnforcer, HypnospaceOutlaw, NoMoreRobots
All products recommended by Engadget are selected by our editorial team, independent of our parent company. Some of our stories include affiliate links. If you buy something through one of these links, we may earn an affiliate commission.