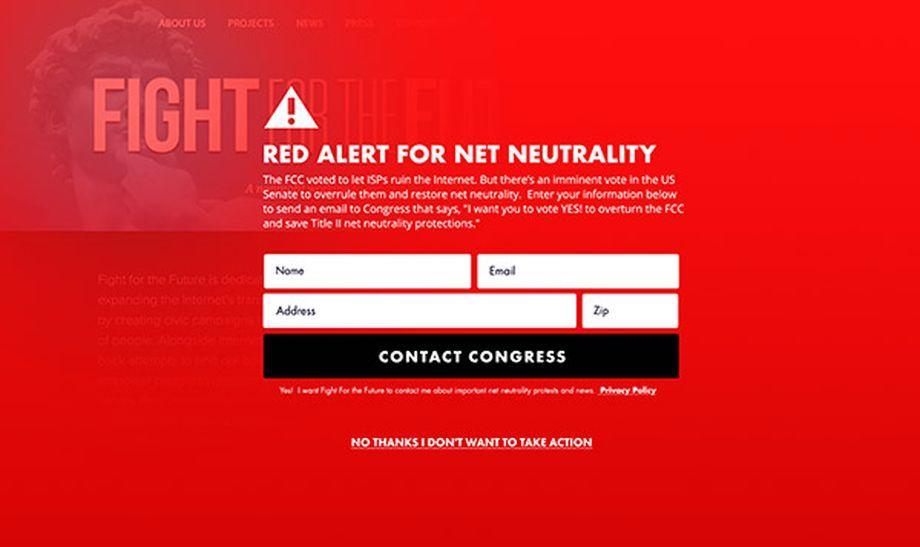 Fight for the Future has announced another day of action aimed at encouraging support of a Congressional vote to overturn the FCC's removal of net neutrality protections. In December, the FCC voted to overturn Obama-era net neutrality protections, a decision that was published in the Federal Register on February 22nd. The Senate has 60 days from that date to overturn the decision, as per the Congressional Review Act, and Democrats are planning to take the procedural step to force such a vote on May 9th. Between May 9th and the vote, BattleForTheNet.com is calling for websites to "go red" as part of its Red Alert for Net Neutrality Campaign.

Those participating in the Red Alert campaign will post a notice on their websites encouraging visitors to get in touch with their lawmakers. BattleForTheNet.com will supply the code for their red alert, but websites can use their own notices as well. "You don't have to use our code to participate, but you have to do something epic that gets your visitors attention drives calls and emails to Congress," says BattleForTheNet.com.

We have the signatures. On May 9th, we officially file the petition to force a vote on the Senate floor to save #NetNeutrality.
#OneMoreVote pic.twitter.com/BvxnTjGwx5

BattleForTheNet.com is backed by Fight for the Future, Demand Progress and the Free Press Action Fund and the Red Alert campaign is already supported by Etsy, Tumblr, Postmates, Foursquare, Twilio, Private Internet Access and Gandi.net. Earlier this year, BattleForTheNet.com called for an online day of action as it campaigned to attract one more Senator to join the vote to overturn the FCC's decision. Currently, all 49 Senate Democrats and one Republican have announced their support for the vote. One more Senator will be needed to overturn the decision in the Senate and move the effort over to the House of Representatives. There, it will need 218 votes to pass -- which will be a hard number to achieve -- and would then move on to President Trump who could still veto the measure.

"This senate vote will be the most important moment for net neutrality since the FCC repeal. Now is the time to fight," Evan Greer, deputy director of Fight for the Future, said in a statement. "Every internet user, every startup, every small business -- the internet must come together to sound the alarm and save net neutrality."

In this article: battleforthenet.com, DayOfAction, etsy, FCC, fightforthefuture, foursquare, gear, internet, NetNeutrality, politics, postmates, privateinternetaccess, senate, tumblr, Twilio
All products recommended by Engadget are selected by our editorial team, independent of our parent company. Some of our stories include affiliate links. If you buy something through one of these links, we may earn an affiliate commission.