There are already so many examples to learn from.

Fitbit wants to help women stay on top of their cycles. It added a "female health tracking" feature to its app two months ago, which puts data about periods and ovulation alongside your other metrics. Although there are plenty of period and fertility tracking apps available, having Fitbit keep all that information in the same place as the stuff it already knows about you should be both convenient and illuminating.

Think about it. You could see how your fitness is affected by your period, and it eliminates the need for a whole other app to keep up with your cycle. I also applaud Fitbit for paying attention to women's health -- no other major fitness tracker maker has targeted this neglected demographic.

The trouble is, Fitbit hasn't implemented this feature very well. Your period data is one of several tiles you can add to your dashboard, and it shows you which day of your cycle you're on. Tap the card, and a calendar shows up, telling you when it expects your next period and ovulation.

This calendar could really use some work. It alternates between gray and white backgrounds to differentiate between months, which otherwise blend into each other. And the months are labeled with incredibly tiny text, making it easy to lose track of where you've scrolled. 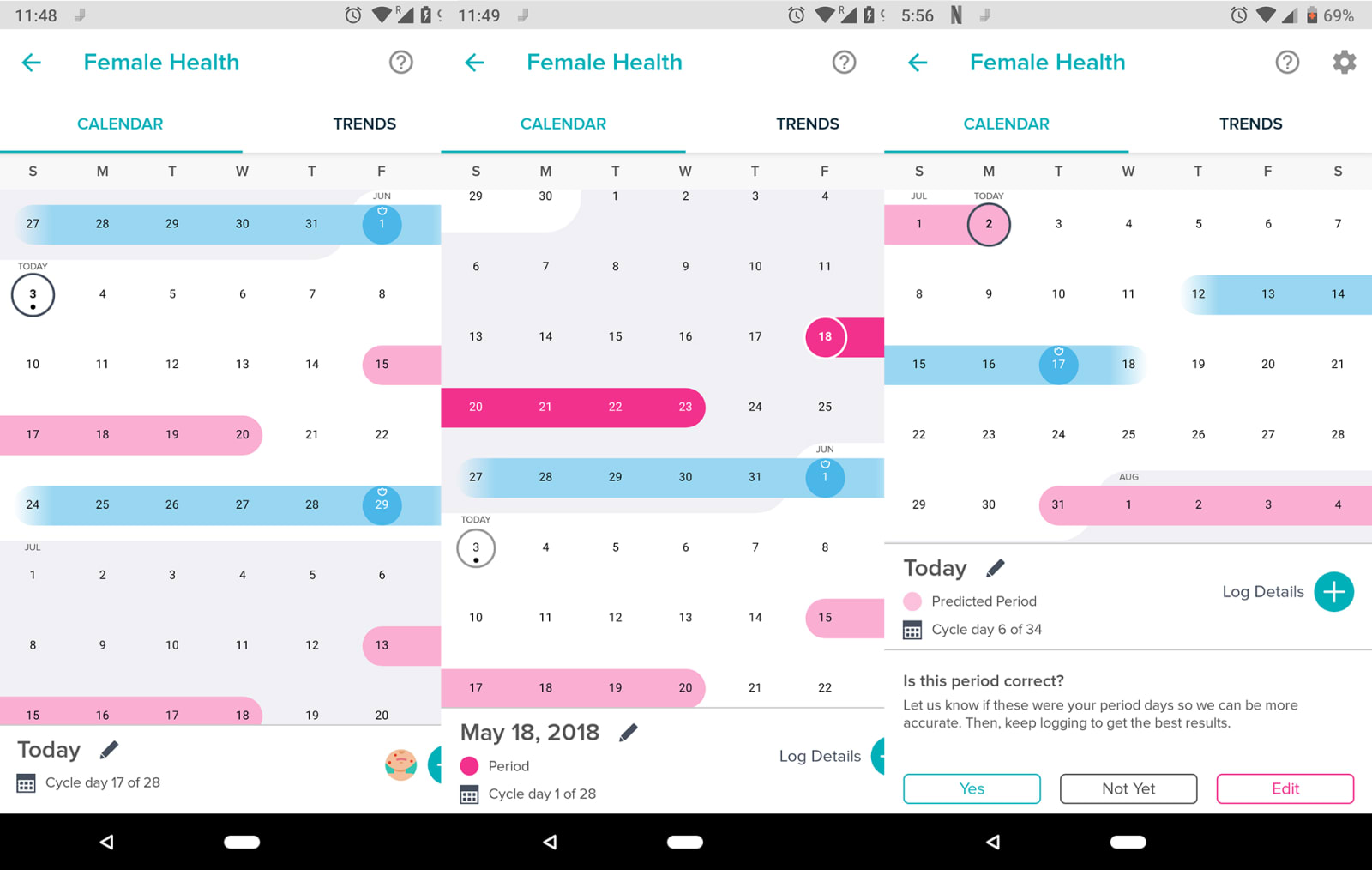 Fitbit's calendar also doesn't tell you, at a glance, how you felt and behaved each day. On Planned Parenthood's Spot On, for instance, the calendar uses emoji to show the mood you've logged. And in Clue, you can see how heavy your flow was.

Possibly the most egregious part is that Fitbit requires you to manually set period start and end dates in the calendar instead of automatically recording that when you log how heavy your flow is. To quote the app, "logging flow will not add to a period." You'll have to enter edit mode to add or edit one. The competing options do so automatically when you log your flow.

It's also embarrassing that Fitbit only allows you to choose from five "conditions" -- the word it chose for symptoms like cramps, acne, headache, tender breasts or "sick". I'm assuming by the thermometer in the icon for "sick" that it's referring to whether you've felt feverish.

There are so many more common pre, mid and post menstrual symptoms, though. I always get bloated and exhausted during my period, and can't log this via Fitbit. Meanwhile, Spot On and Clue both offer plenty more options, including bloating, dizziness, nausea, stomach ache and yes, fatigue. They both also let you note your mood in a separate section, something Fitbit omits altogether. Maybe the company doesn't want to reinforce stereotypes about PMS, which is laudable, if true. But then by leaving out so many other common symptoms, it risks invalidating them. Are the five "conditions" listed the only ones that matter? 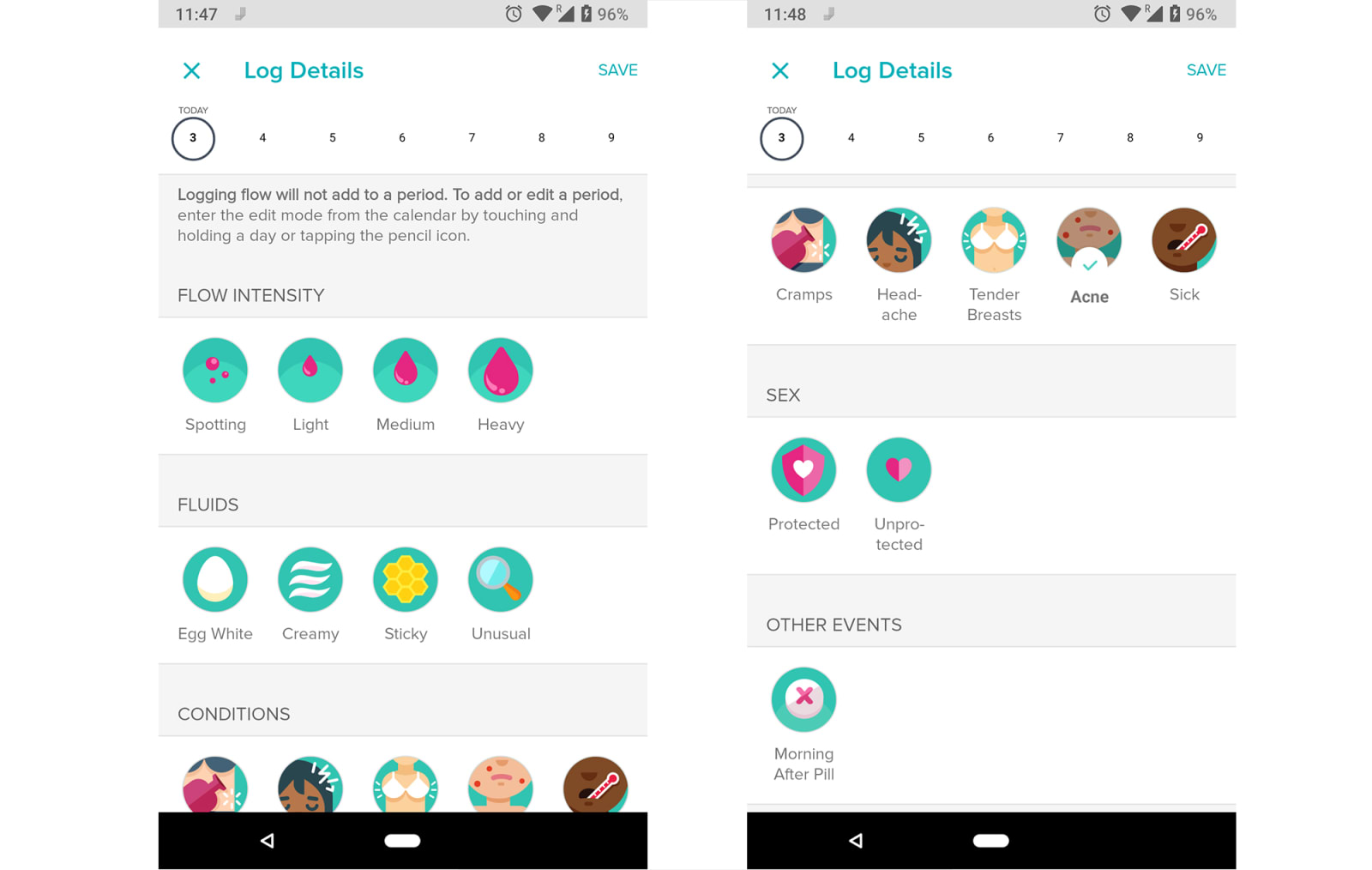 I also wish tapping the female health card on the Fitbit dashboard brought me directly to a page to log my symptoms for the day, instead of a calendar where I have to hunt for today's date, then hit a button at the bottom right that says "Log details." That's just far too many steps. Plus, Fitbit recommends you "log your period consistently for more personalized predictions," but it doesn't remind you to enter the information.

Overall, though, the female health tracking feature has its merits. It was quite accurate at predicting one of two of my periods in the two months I've been testing it. It was far less effective at predicting my upcoming windows, possibly because I didn't log my last one. After I manually set the dates of my previous period, the system adjusted its prediction, and I'm not sure how accurate that is yet. This is one of the major drawbacks having to go through the rigamarole of entering your start and end dates -- if the user forgets or doesn't out of inconvenience, then the entire system's accuracy is messed up.

I did like how handy it was to swipe up from my Versa's home screen and see how many days I had before my flow started. The app also sent an alert on my phone before my period was about to start, which is helpful when it's accurate -- nobody wants to have an embarrassing accident.

As I'm not trying to get pregnant, I didn't find the ovulation tracking feature particularly useful. But, it could be for those who are. Also, I haven't seen any patterns between my cycle and my fitness activity, other than the obvious fact that I cut down exercising when I'm on my period. Fitbit could do a better job of overlaying this information on top of sleep or exercise charts in its app. Behind the period tile, you can check out trends like your typical period length, average ovulation day and graphs of past cycles if you wish, although for most women a lot of this isn't new information. We've done this for years, we know how long they last. Over more time, though, maybe I'll learn something interesting.

While I'm glad that Fitbit is paying attention to female health, I wish the execution was better. There are already many good examples out there to refer to, which makes me wonder if the company did its research beforehand. How many women were involved with creating this? How comprehensively did they test it? What experience did they have with other period trackers? Apparently, very little. Until the company redesigns this feature to make it more insightful and easier to log symptoms, I'll go back to my regular app.