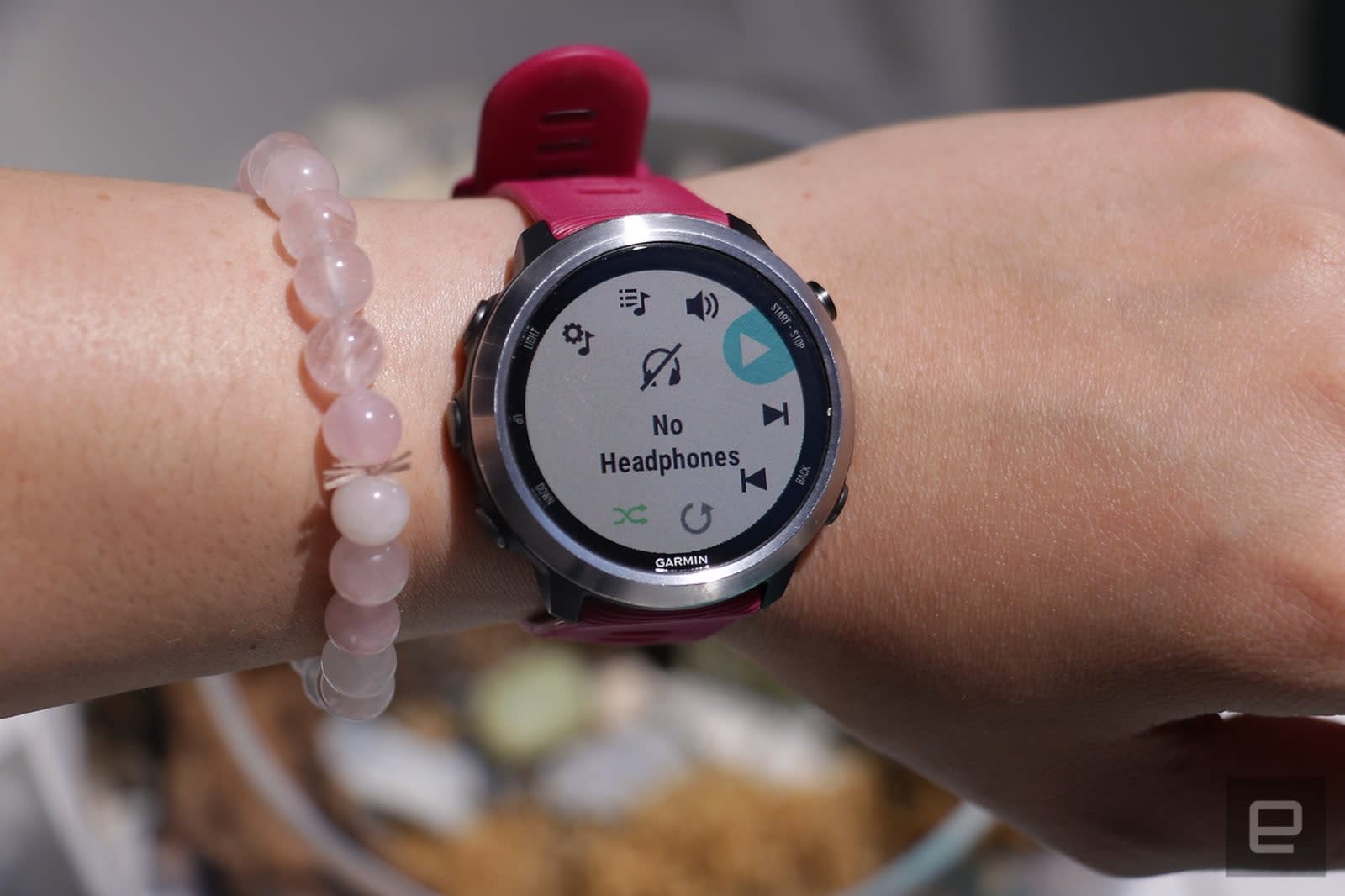 It's a definite improvement from early models.

An invigorating playlist can be a runner's best friend, but for some, the Linkin Park jams aren't worth the discomfort of strapping a phone to your arm. That's why fitness-watch makers are adding audio playback directly into their products. This includes Garmin, which is giving the Forerunner 645 a musical makeover (creatively named the Forerunner 645 Music). For $50 more than the original, the new model lets you play your own tracks (or playlists from select streaming services) wirelessly to Bluetooth headphones.

Like on the Fitbit Ionic, Versa and Samsung Gear Sport, there are two ways to add tracks to the Garmin -- via third-party music apps or local storage. For now, though, the Forerunner 645 Music supports only iHeartRadio, which has limited options for customizing your playlists.

The alternative is adding your own files to the watch's 3.5GB of onboard storage, and this requires a lot more effort to finagle. You'll first need to download Garmin's desktop app (called Express), then connect your watch to your laptop (via USB). Express scans selected folders for music files, then lets you pick which ones to send to the Forerunner. This method is similar to Fitbit's and can be tedious if your music library isn't well organized.

To my surprise, on my first attempt, only two of the ten songs I picked made it to my wrist, and they were both .m4a files (the others were converted MP3s). That's likely an error resulting from how I converted the songs, but it would have been nice if Garmin Express let me know that the tracks didn't sync. The company says MP3 and AAC files are supported (.m4a is a type of AAC file).

With your songs loaded, you'll need to pair your headphones. Connecting your cans for the first time is relatively simple. Scroll to the music player on the watch; it will then prompt you to pair your headphones. In three steps, I had my OnePlus Bullets Wireless connected. Strangely, because the Bullets were synced to my phone before that and I was streaming a YouTube video to my Chromecast, I somehow ended up controlling my TV with the Forerunner 645. Granted, this is a very specific scenario, but it's a curious one nonetheless. 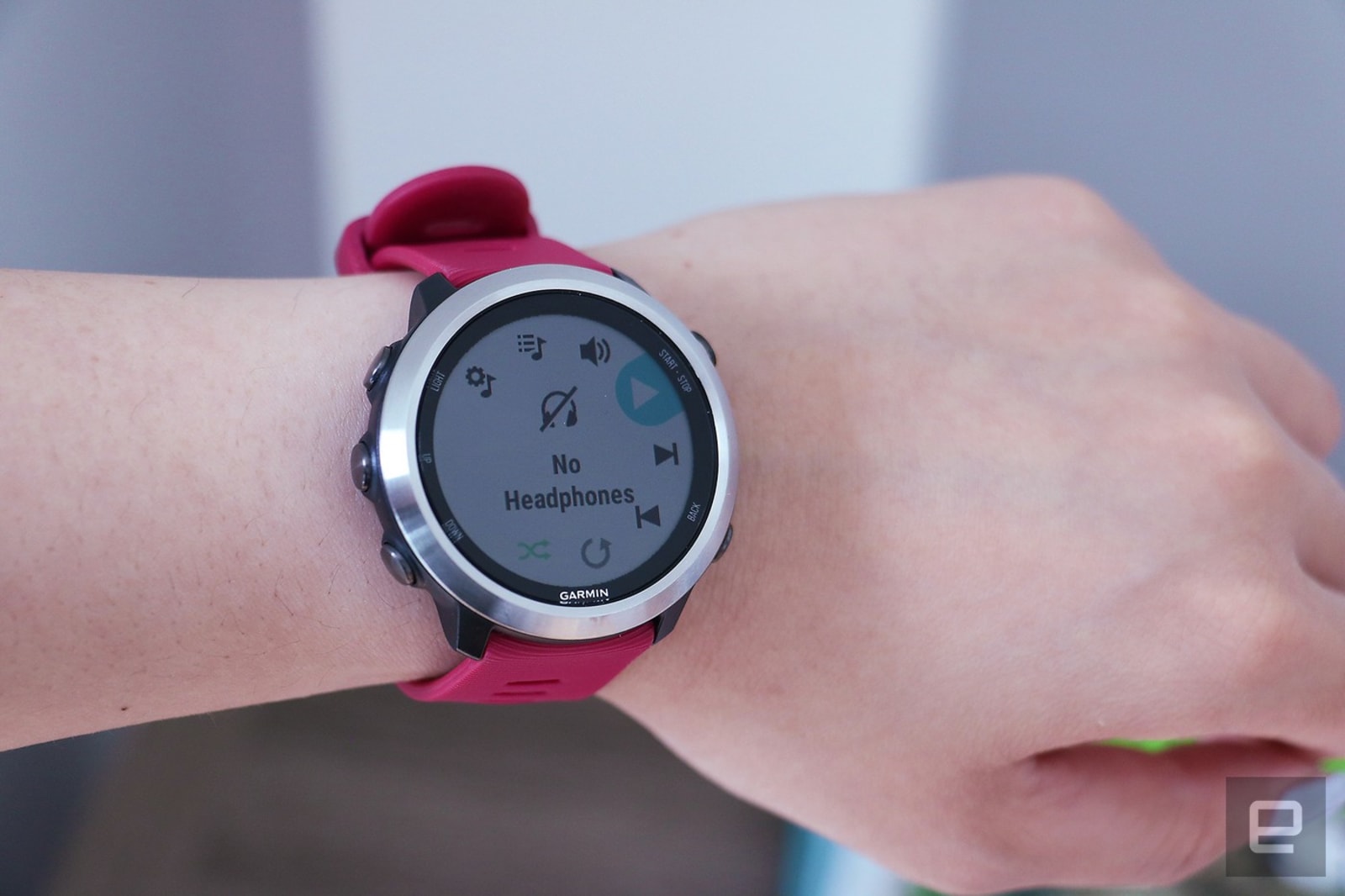 When the Forerunner 645 works like it's supposed to, it offers robust music controls. You can play, pause and skip tracks (of course), or choose different sources and organize your playlists. I didn't notice any skips when I played my songs while walking around outdoors, but a colleague noted some interruptions in the connection when he turned his wrist away from his head. That's irritating -- you'll have to deal with the potential disruptions and pauses in your music when you're out, unless you can ensure that your watch is constantly pointing in the right direction (or in a more enclosed space).

Another annoyance involves switching your headphones between watch and phone. When I unpaired my earbuds from the watch and re-linked them to my Pixel 2 for my commute, I couldn't get the Forerunner to connect to those earbuds again and had to use another set. I had no such problem pairing my colleague's AirPods to the Forerunner and back to his iPhone, so this seems like a limited issue for now. The company hasn't gotten back to me with an explanation yet, either, so it's not clear whether it's just a general Bluetooth bug.

The music might be the new thing here, but the Forerunner 645 is a capable fitness watch in its own right. Its design is a noticeable improvement over older models (like the Forerunner 25 or 35). According to our executive editor Dana Wollman, who uses Garmin watches for her marathon training, the 645 is lighter and smaller than early models, which makes it easy to wear all day long. She also likes the soft, flexible rubberized band.

In addition to the comfortable design, the Forerunner 645 has features like step counting, sleep tracking and smartphone notifications that make it appropriate for daily use. It's not the most stylish watch, though, so you might want to swap it out for something classier for a formal night out. I also rarely had any trouble reading the "transflective memory-in-pixel (MIP)" display, which looks like a more polished alternative to color e-Ink.

As someone who's more accustomed to touchscreen smartwatches, it took me a while to get used to Garmin's OS. Using the five buttons surrounding the Forerunner 645's face to scroll through and find the app I want is tedious at first, but after two days, muscle memory kicked in. This is similar to how most of the company's newer watches work, though, so Garmin fans will feel at home.

That said, I wish it didn't take so many clicks to see my notifications and reply to texts -- you need three pushes up from the watch face, then two pushes on the notification before you get to the preset responses. But at least you can rearrange the order of activities on the workout page so your favorites are easier to reach. 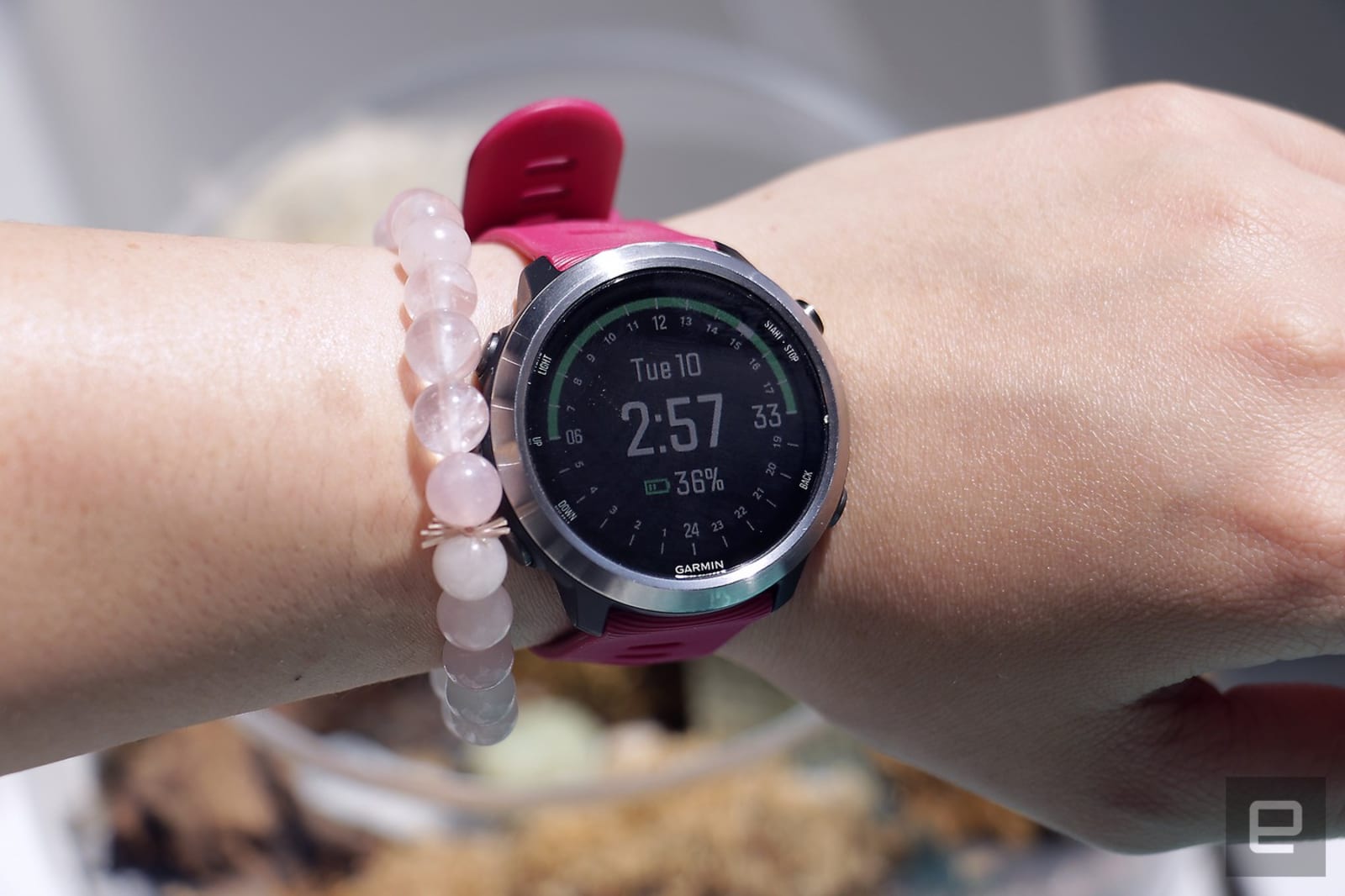 I mostly used my Forerunner in the gym, although I did try it on a couple of jogs outside. In general, the watch did a good job of informing me of my lap times during my runs (both on treadmill and outside), and the heart-rate sensor was usually within a beat or two of my treadmill's. Runners will also appreciate (as Dana did) features like onscreen road and elevation maps, VO2 max readouts and a breakdown of the time you spent in each effort zone. After each workout, the watch also recommends how long you should recover and how hard you should go next time, which is a nice touch.

Seconds after I ended most of my sessions, my information showed up on the Garmin Connect app on my phone, with an alert telling me my report was ready. I enjoyed digging into this data to see just how well I'd performed earlier. Connect provides a ton more information than, say, Fitbit on my individual workout metrics but also a good overview of my general health. Plus, compared with older models, this syncing feels more reliable and automatic.

The Forerunner 645 is faster than some older models at locking on to GPS; it now takes seconds instead of minutes. In my experience, it usually takes about ten to fifteen seconds for the watch to find enough satellites, although it occasionally takes longer (in areas with more and taller buildings). That's much faster than some models of the Garmin Fenix, too.

The Forerunner doesn't automatically recognize when you've started exercising. Instead you'll have to navigate over to the workouts page, pick your activity and press the start button to start logging. It's not a big deal, since this is easy to integrate into my getting-ready process before working out. The device will also note when you've been more active than usual if your heart rate's increased for at least ten minutes.

With a name like Forerunner, it's no surprise that this watch is really meant for runners (get it), but it does a decent job of tracking other workouts too. During my strength training sessions at the gym and a Soulcycle class, the Forerunner 645 was pretty reliable at monitoring my pulse and time spent. Rep counts are sometimes a little iffy, but that could have more to do with my form than the device. When I was extra deliberate with my actions, the watch precisely logged the 15 biceps curls I did. That could be a good or bad thing -- if it forces you to pay attention to your form. 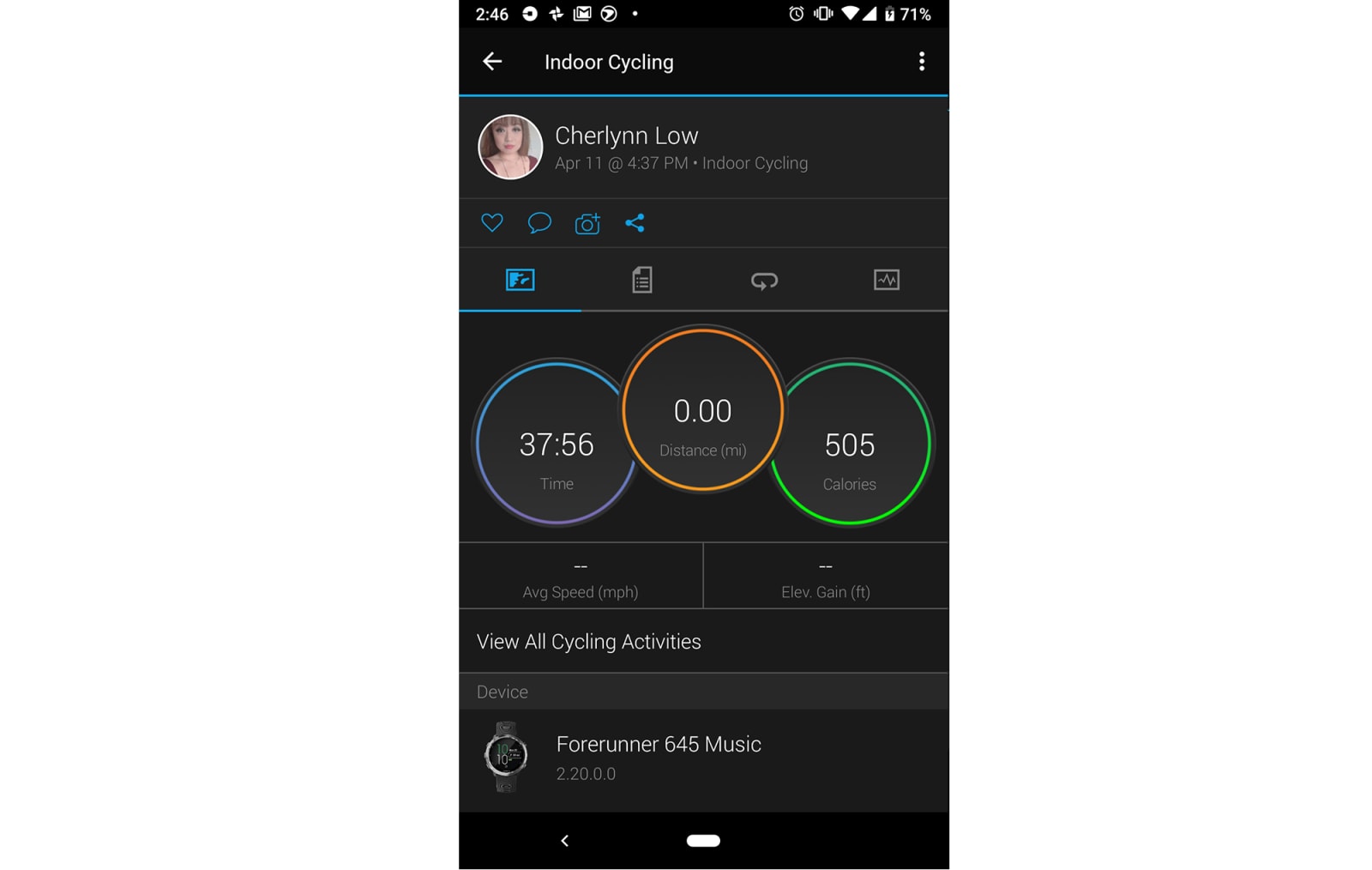 Those who cover long distances don't have to worry about this watch conking out mid-run. In general, the Forerunner 645 Music lasts five to seven days with general use and about two or three workouts per week. In Dana's experience, after she ran for an hour and 35 minutes without music, her watch still had 82 percent battery left.

I've been comparing the Forerunner 645 Music with devices like the Fitbit Ionic and Samsung Gear Sport because they're notable fitness watches that play music over Bluetooth. But they're both also $100 cheaper than the Garmin, and are meant for different audiences. In particular, they're targeted at more mainstream users who don't need such detailed measurements or worry about improving things like their cadence.

If you want something simpler from Garmin, you might prefer the new Vivoactive 3 Music, which has a touchscreen in addition to most of the features the Forerunner offers. It's a hair heavier than the Forerunner and lacks some advanced running tools, but it's also $150 to $200 cheaper (depending on where you look). The company also offers higher-end running watches than the Forerunner, in particular the Fenix line, which looks more premium and has more in-depth features. Of course, the Fenix also costs about $100 more.

Ultimately, the Forerunner 645 Music is a solid running watch. It's a significant improvement over the 645's predecessors, although the addition of Music doesn't really represent a huge improvement over the previous model -- unless that's something you must have. The ability to play tunes from your watch is nice, and Garmin's implementation is slightly better than Fitbit's, but its connection issues keep it from being a reliable feature.

If you're willing to take a chance on a finicky music stream and phone-free tunes are very important to you, by all means spend the extra $50 on the Forerunner 645 Music. Otherwise, the regular Forerunner 645 is a capable all-day fitness companion.