A touchscreen is better than onboard GPS. There, I said it.

I recently set my mom up with a Fitbit Charge 2 and had to go to great lengths to explain how to use its pseudo touchscreen. "You have to tap it, but really hard, more like jab at it," I told her, as she poked at the device. "Aim for the logo, it's a bit more sensitive there." My poor mom is almost 60, and learning a new way of interacting with a watch isn't easy. She looked on wistfully as I explained to her why the Fitbit Versa, with its easier-to-use touchscreen, was too complicated for her needs. More than anything, my mom doesn't like the appearance of smartwatches like the Versa and Ionic, preferring the simpler aesthetic of the Charge. I finally got her an Alta HR instead, which adds a few more features, but still uses that odd "Tap Display."

That's why I'm so glad Fitbit added a touchscreen to the Charge 3, which launched today. It's been two years since the company last updated its Charge tracker, and from my experience with an early unit, it may have been worth the wait. The Charge 3 is the first Fitbit tracker (not smartwatch) to get a true touchscreen.

The interactive display allows for more features, like a dashboard when you swipe up on your homescreen, or quick replies to messages from your wrist. But the Charge 3 is also swim-proof, lasts seven days on a charge and is a little more stylish than before. Sure, it would have been nice to have built-in GPS, but that would have led to a larger, more expensive device with worse battery life. Besides, for the audience that Fitbit has in mind, it's not a major omission.

In addition to the proper OLED touchscreen, the Charge 3 has a new inductive "button" on the left of its face, instead of a physical one to help with water-resistance. It's a little pressure-sensitive notch on the edge that you press to go back a page, and the vibration in response makes it feel more realistic. The company said it would work with wet fingers too, so you can use it at the pool or even after a super sweaty session. 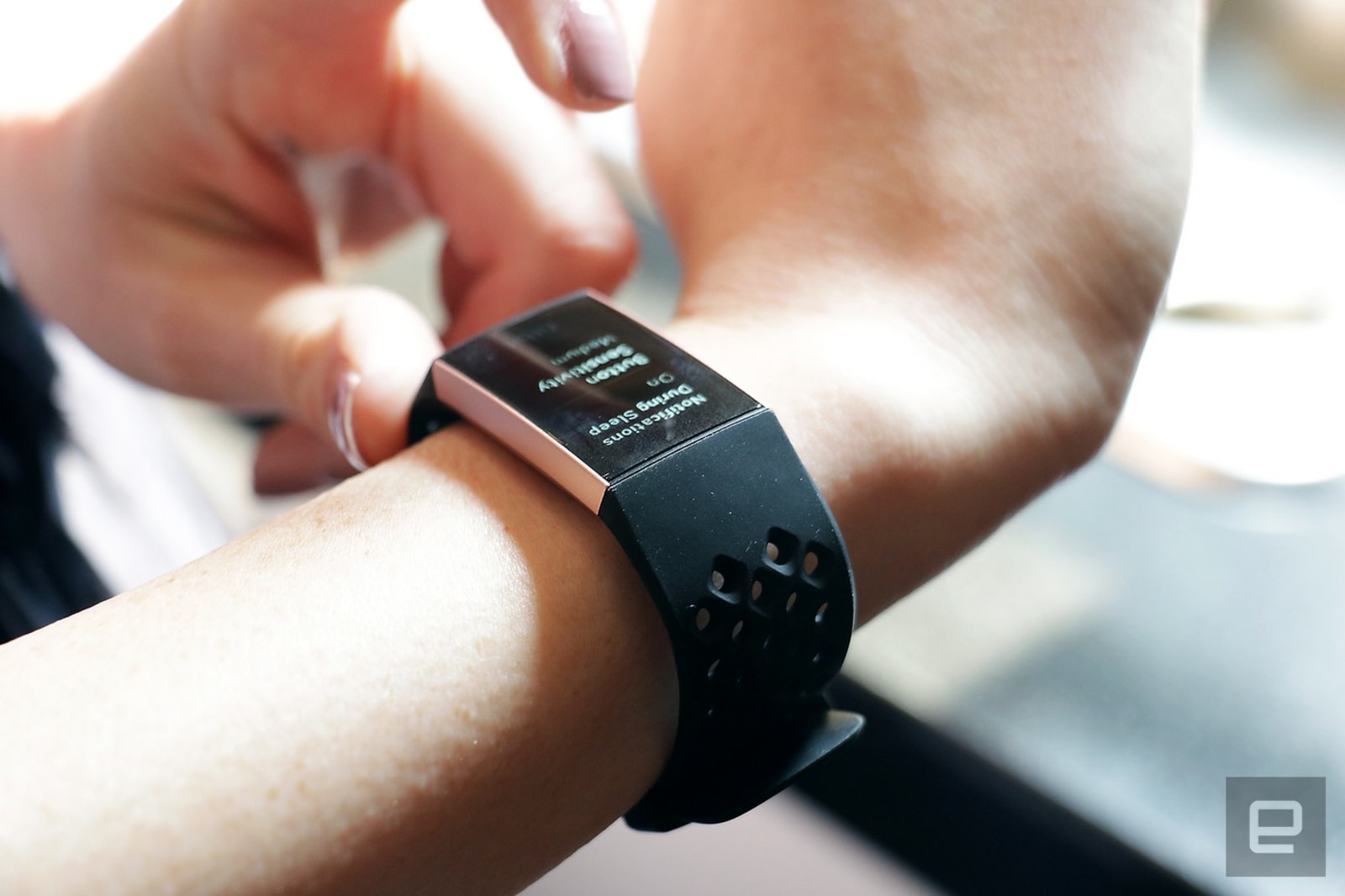 Thanks to its water resistance (up to 50 meters), the Charge 3 can track your laps at the pool. Using Swim mode does a number of different things, including turning off the heart-rate monitor since it doesn't work underwater. Just like the rest of the activity modes, you can see data like elapsed time, number of reps or laps and your heart rate on the screen. Not much has changed here except that when you launch a new workout session, you can now set a goal for things like calorie burn, distance or time. I launched a bike session, for example, and could choose to set 20 minutes, 10 miles or 300 calories as my goal. It's meant to make your workouts feel more personal. Without having tried it out myself in the real world, though, I don't know how useful this is just yet.

What's clearly more useful is the touchscreen and the interactions it enables. Swiping up from the home screen brings up what Fitbit calls "Today" -- a dashboard of your progress towards step, calorie and distance goals, in addition to other data like where you are on your menstrual cycle (assuming you have one). Swipe left to see apps like Alarms, Exercise, Timer, Weather and Calendar, and swipe down to see your notifications. You can also set goals or accept and reject calls from the Charge 3 -- something you couldn't do with the Tap Display before. The screen was responsive, and apps opened almost instantly after I tapped them. The panel was also easy enough to see under harsh sunlight, although glare did occasionally get in the way.

Fitbit promises up to seven days of battery life on the Charge 3, and the company tends to give pretty conservative estimates. The tracker houses a bigger battery than its predecessor, while managing to be 20 percent lighter, which is nice. I also appreciate the more elegant design -- instead of an angular body, the Charge 3 curves slightly under the face and hugs your wrist more snugly. The new rose gold case option is also very attractive. (I already know this is the one I'll get my mom.) 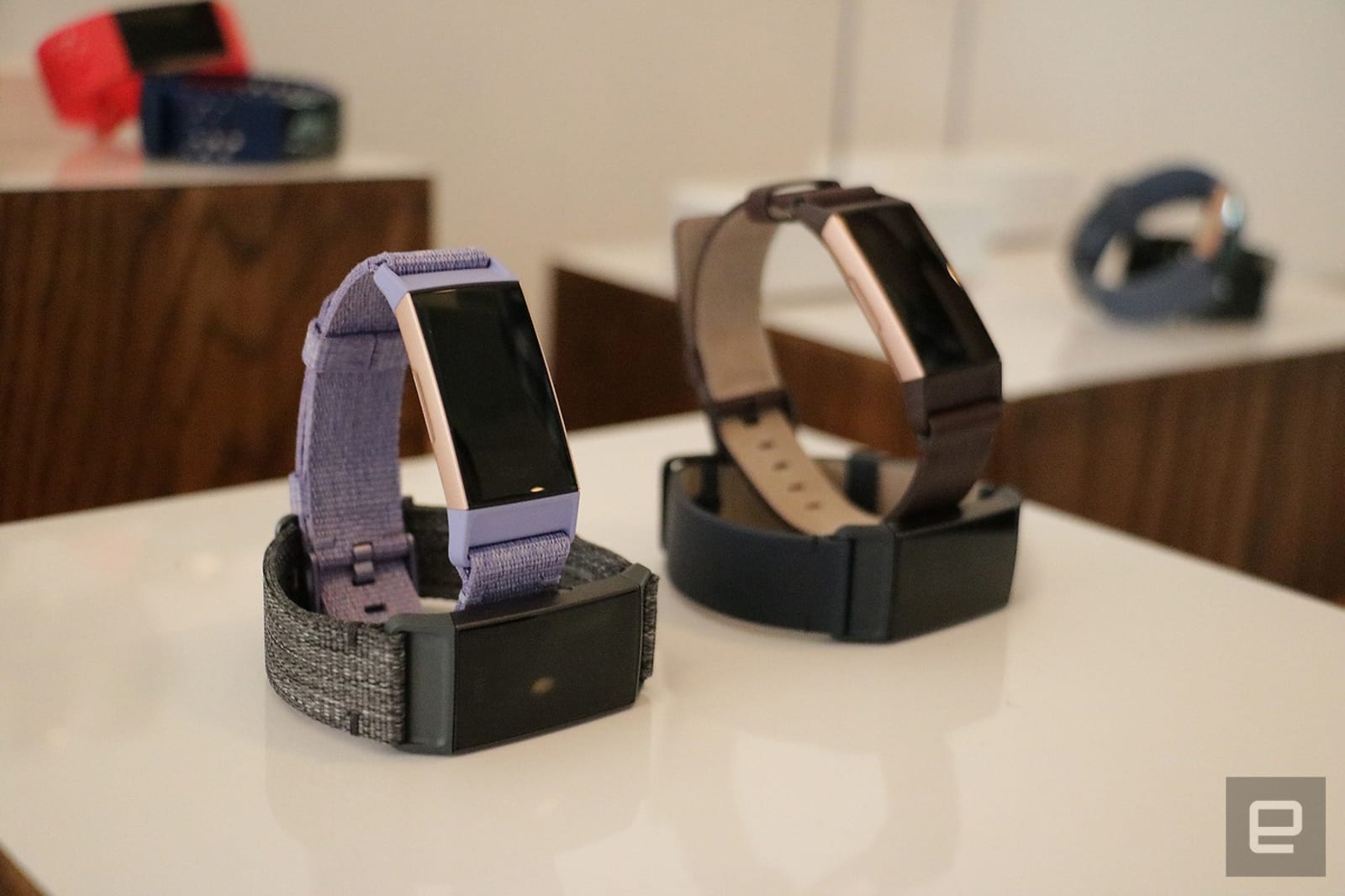 The company plans to roll out a few new software features, particularly around sleep tracking. The Charge 3 has a relative blood oxygen monitor on it, just like the Versa and Ionic, which will detect what the company calls "sleep disturbances." If your breathing is irregular, the system will alert you. When you're sleeping, the number of sleep disturbances contributes to the quality of your sleep. Fitbit will use factors such as restlessness, sleep disturbances and length of time in specific sleep stages (REM, light, deep etc.) to evaluate your slumber each night and give you a score in the morning.

This is a much more helpful way to understand how well you're sleeping, compared to the existing method, which simply displays how much time you've spent in each stage. It's not yet clear when the new sleep score will launch, although Fitbit is starting beta tests soon, and all devices with the blood oxygen sensor will get the feature.

Despite the lack of GPS, the Charge 3 might still appeal to casual runners. Its auto-detect feature will now recognize when you've paused during your run and stop counting the time, then pick back up when you resume. This is helpful for people living in cities who frequently encounter stoplights during their workouts and don't want to mess up their pace and time stats. For GPS data, the Charge 3 will need to connect to your phone -- so if that's a dealbreaker for you, an Ionic will suit you better.

Fitbit designed the Charge 3 for a more general audience -- people like my mom who want to stay active, track their sleep and remain connected to their phone but don't like the aesthetic or complications of a smartwatch. For them, I can see this being a compelling device. You get all the fitness and sleep tracking you need in an inoffensive design, and a battery that's supposed to last seven days. Garmin's Vivosmart 3 is cheaper and also offers a touchscreen, but its display isn't as crisp, nor does it last as long as the Charge 3 (is supposed to). Plus, Fitbit's band looks more elegant than the Garmin.

I do wish the Charge 3 were a bit cheaper. At $150, it's only $50 cheaper than the Fitbit Versa, which offers a full-color screen, music streaming and full-fledged apps. You can also get a Special Edition of the Charge 3 for $170, which comes with NFC for contactless payments. Both models are available for pre-order today and will arrive in stores in October. For people who only want a tracker and not a smartwatch, the Charge 3 seems like a full-featured and promising option.

All products recommended by Engadget are selected by our editorial team, independent of our parent company. Some of our stories include affiliate links. If you buy something through one of these links, we may earn an affiliate commission. All prices are correct at the time of publishing.
View All Comments
Fitbit Charge 3 hands-on: Better controls come with a trade-off