Without coding features this Bat-vehicle doesn't have a lot to do right now.

Even as STEM toys become more popular, Lego's construction sets remain the gold standard, with more recent products like Mindstorms and Boost expanding into the fields of robotics and coding. This month it's bringing that technological expertise to its more standard kits with the Powered Up ecosystem. Now bread-and-butter sets like Lego City and licensed products like DC Superheroes get nifty additions like motorized parts and app connectivity, starting with Batman's iconic vehicle.

This is the Batmobile from the current slate of DCEU films, complete with tiny cannons and a scowling Batman minifig. For the most part it's a pretty normal Lego set where you follow the instructions and snap it together with your hands. But maybe it was a little too normal: I still had to rely on a paper manual for help, as there are no instructions in the app. Maybe I'm a little spoiled at this point by products like Kamigami and Labo, but one of the advantages of making something app connected is the ability to have interactive diagrams that animate where to place each piece and even allow you to rotate the image for a better look. I often found myself double and triple checking each diagram in the manual, trying to locate where each new piece goes and still sometimes getting it wrong. I even had to disassemble entire sections to fix mistakes. (Luckily the set also comes with a brick separator.) 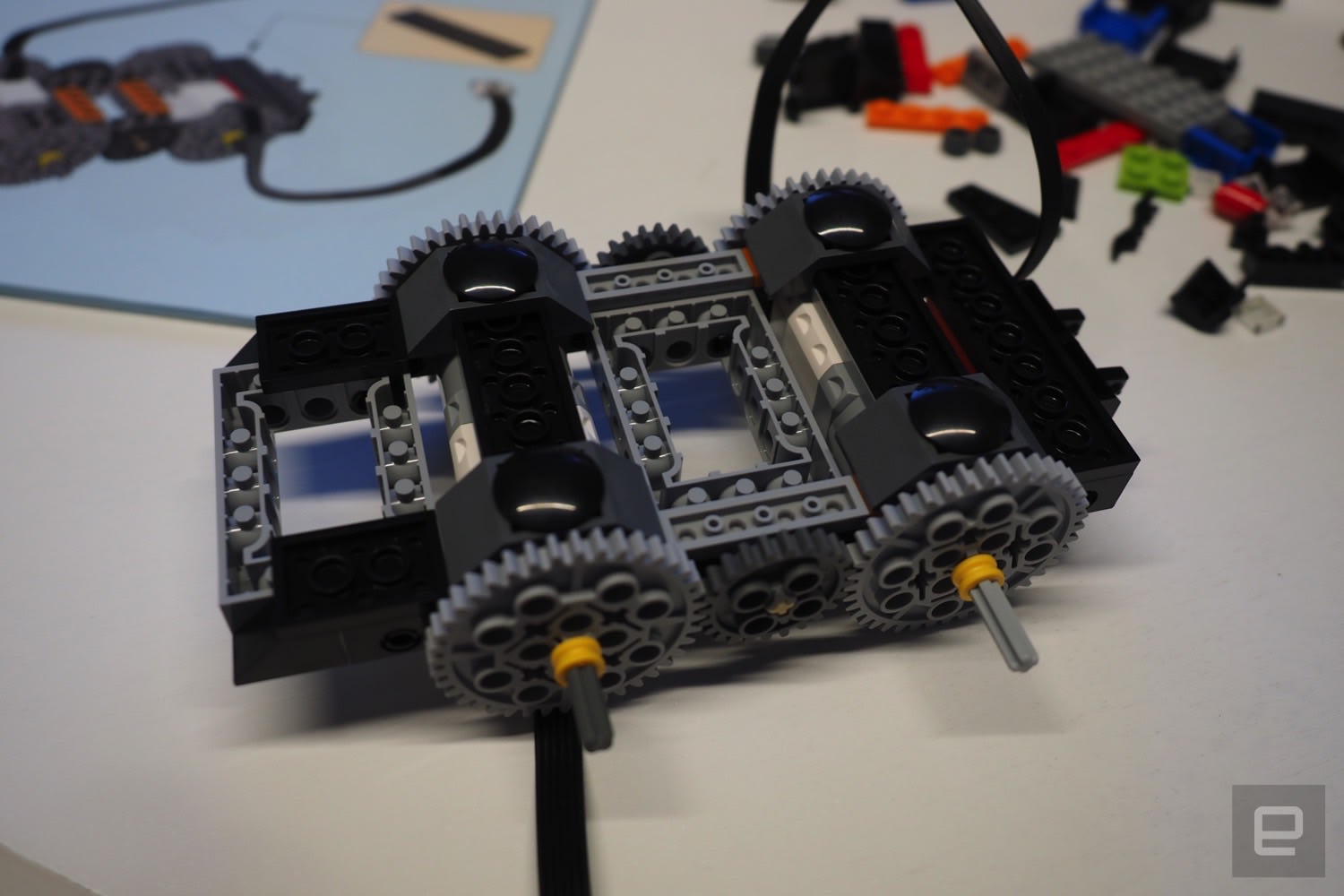 Even with this irritation, I found myself impressed by all the mechanical bits as I connected the Bluetooth hub, motors and wheels. The educational benefits become really apparent at this point. I enjoyed flipping it over to watch the gears turn and I think kids will get a kick out of it too, especially because it's something they've built with their own hands. But there were still a lot of things to be less wowed by: The set seems to include a lot of custom, nonstandard Lego parts, which tend to increase the cost of the kit (and they're just sort of ugly). Some of the parts just won't stay put, especially the little bat-shaped symbols, which pop off whenever I pick it up. And one of the wheels also has a propensity to fall off too no matter how tightly I think I've attached it. As a Lego set it's merely OK.

The real magic is supposed to come once you've connected it to the app, but that too is also just an "OK" experience. The app doesn't really have any explicit instructions on how to get the Batmobile connected. I pushed the button on the top of the hub to start the syncing process but it kept timing out without actually connecting. After several minutes of fighting with both the app and manual offering no help, I restarted Bluetooth on my phone and closed and reopened the app several times to eventually get it working. It's not really something impatient kids who've just spent over an hour putting this thing together should have to deal with. Another potential sticking point is that the hub requires six AAA batteries to function, instead of using a rechargeable lithium battery like many other STEM-oriented products. Maybe this was done to keep the cost of the product down but at the expense of user experience: I have many memories as a child of always searching for batteries and begging my parents to buy more. Even once I managed to find six, it turned out that some of them didn't have enough of a charge, making my first run with Batman's sweet ride a bit of a sluggish one. (There's a battery indicator buried in the app under a submenu.) Once I swapped out the low battery, the motors became far more responsive.

You have two options for controlling the Batmobile in the app: One which uses sliders and one which uses arrow buttons, but I couldn't tell much difference beyond that. Both have extra buttons which make the Batmobile do little tricks like a little hop on its rear wheels, or turn in a sort of "guard" mode. Interestingly enough, the right and left wheelset have separate controls, much like a more traditional remote-control car. Any kid more accustomed to a joystick is going to have a bit of a learning curve. Admittedly it's not too bad, I managed to steer the vehicle around the desks in the Engadget office without bumping into a single chair, and had it doing some nifty spins in the middle of the carpet pretty quickly. 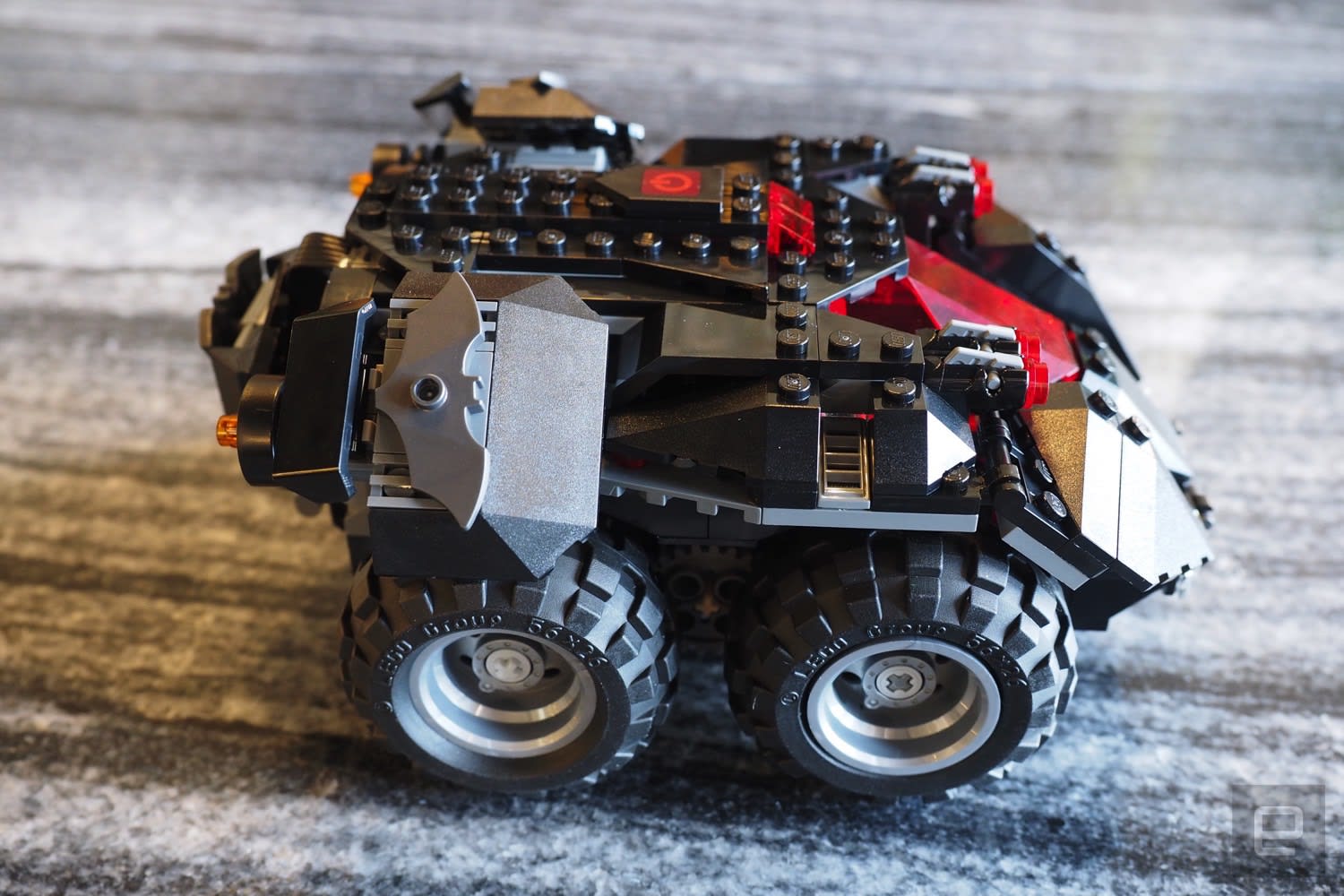 The app won't have any coding modes until later this year, which diminishes its educational value once you're done assembling it. A common criticism of Lego's licensed sets is that they limit folks to only building the one thing that's pictured on the box, but anyone who's ever played with kids knows that's not necessarily true; children will rearrange pieces and build entirely new and crazy things with them. But the intricacy of the drivetrain and the lack of programming features really do feel like constraints on what you can do once you're tired of driving with the Batmobile. Instead, you can pick up a Lego Boost set for $150 with instructions for five models included. But kids are also welcome to rearrange and write code for their creations to their heart's content. For its $100 price tag, the Lego Batmobile just doesn't have a lot to offer right now.