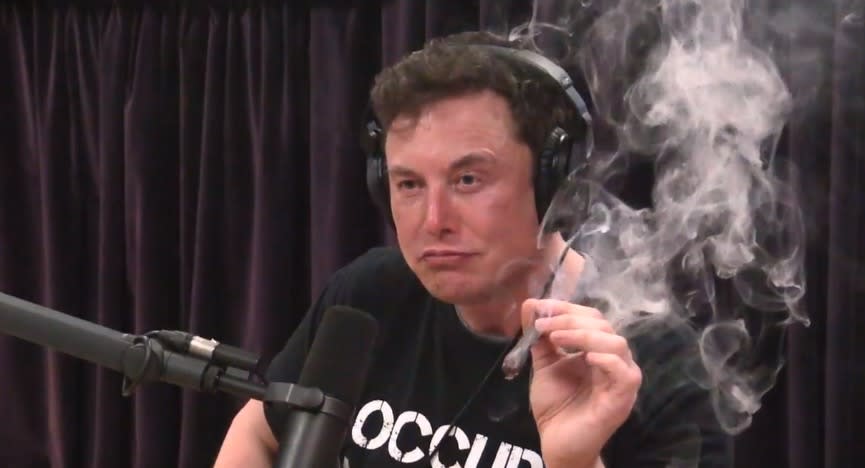 Tesla wrapped up an interesting week -- CEO Elon Musk took a puff or two from a joint live on Joe Rogan's podcast, its recently-hired chief accounting officer quit after less than a month on the job and its HR chief announced she would not return from a leave of absence -- by announcing a round of executive promotions. In a letter to staff that's also posted on the company's website, Musk said: " For a while, there will be a lot of fuss and noise in the media. Just ignore them. Results are what matter and we are creating the most mind-blowing growth in the history of the automotive industry."

Most notable, Tesla now has a new President, Automotive. In a move that may take some direct responsibilities and pressure off of Musk, Jerome Guillen "will oversee all automotive operations and program management, as well as coordinate our extensive automotive supply chain." Guillen will still report directly to Elon Musk, and in the letter he's credited for leading the creation of a new Model 3 production line.

Recent turmoil including Musk's behavior and employee turnover combined with failures to meet deadlines and production goals have intensified criticism on the company and its founder. After the two departures were announced this morning and news of Musk's podcast appearance spread, the company's stock price dropped six percent to $263, off more than $100 from the $370 high reached a month ago when Musk tweeted he had "funding secured" for the company to go private. Adding new execs for Gigafactory Operations, Director of HR, VP of Environmental, Health and Safety, VP of Global Recruiting and promoting a senior director of Global Communications could help calm some nerves.

To help achieve our goals, after discussing this in-depth with the Tesla board of directors and executive staff over the past several weeks, I am excited to announce a number of management changes:

Jerome Guillen has been promoted to President, Automotive, reporting directly to me. In his new role, Jerome will oversee all automotive operations and program management, as well as coordinate our extensive automotive supply chain. Jerome has made major contributions and acquired deep knowledge of Tesla's operations over the past eight years at our company, from being the first Model S Program Manager to managing all vehicle programs, then all vehicle engineering and worldwide sales & service. Recently, Jerome played a critical role in ramping Model 3 production, leading what almost all thought was impossible: creation of an entire high-volume General Assembly line for Model 3 in a matter of weeks. Before coming to Tesla, Jerome was responsible for creating and running the most successful semi truck program in history at Daimler's Freightliner division.

Kevin Kassekert has been promoted to VP of People and Places, with responsibility for Human Resources, Facilities, Construction, and Infrastructure Development. Kevin has been with Tesla for 6 years and was previously VP, Infrastructure Development. Kevin led the construction and development of our Gigafactory in Nevada, turning what was a pile of rocks in the Sierra Nevada mountains into a factory employing 12 thousand people with greater output than the entire rest of the world's battery factories combined, in roughly three years. That is insanely badass. Prior to joining Tesla, Kevin engineered and built multi-billion dollar production plants in the semiconductor industry. As many of you know, Tesla's Chief People Officer Gaby Toledano has been on leave for a few months to spend more time with her family and has decided to continue doing so for personal reasons. She's been amazing and I'm very grateful for everything she's done for Tesla.

Chris Lister joined Tesla last year and was key to solving our production problems at the Gigafactory and ramping Model 3 production. He is being promoted to VP, Gigafactory Operations. In this role, he leads our production and manufacturing engineering at Giga. Before Tesla, Chris ran several ultra high volume factories at PepsiCo.

Felicia Mayo, Sr. HR Director and head of our Diversity and Inclusion program, has been promoted to VP, reporting to both Kevin and me. Felicia has done great work promoting the importance of having one of the most diverse workforces in the world and ensuring fairness across hundreds of roles and Tesla operations in over 50 countries. She previously worked in senior HR roles at PwC and Oracle, and, most recently was Vice President, Global Talent Acquisition and Diversity for Juniper Networks.

Laurie Shelby, Tesla's VP, Environmental, Health and Safety (EHS) will also report directly to me. Your safety and just generally making sure that you love coming to work is extremely important, which is why EHS will report directly to me. We are working hardcore on having the safest (and most fun) work environment in the automotive industry by far. Laurie came to Tesla last year after a 25+ year career at Alcoa, where she made tremendous progress in workplace safety. Since joining, she has already overseen a reduction in our employee injury rate, as well as major improvements in our EHS program.

Cindy Nicola, VP of Global Recruiting, will report to both Kevin and me. Cindy has overseen the company's global recruiting efforts since 2015, bringing on tens of thousands of highly talented people. Prior to Tesla, Cindy led worldwide Corporate Recruiting at Apple, and before that was VP, Global Talent Acquisition at Electronic Arts.

In this article: business, elonmusk, gear, JeromeGuillen, model3, tesla, transportation
All products recommended by Engadget are selected by our editorial team, independent of our parent company. Some of our stories include affiliate links. If you buy something through one of these links, we may earn an affiliate commission.