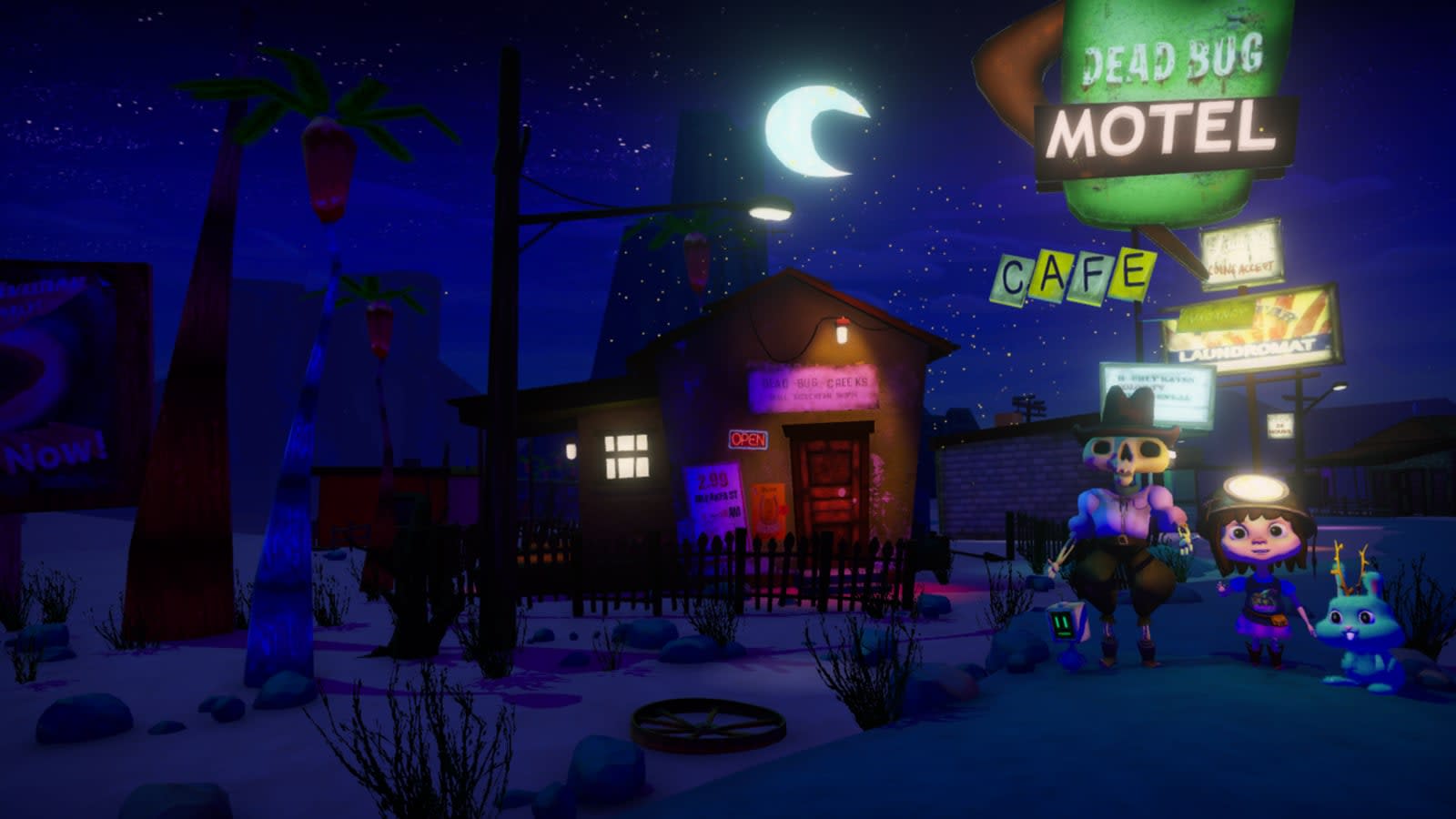 Ashley Pinnick thrives in the gray space between art and technology.

I wasn't really aware as a kid that game development was a career that I could have, especially from an artist's perspective."

That's Ashley Pinnick, a 28-year-old artist and game developer living in San Francisco. Pinnick is a VR Technical Artist for Google, where she's working on Playground, the company's augmented reality app. But three years ago, she was an art school graduate and self-taught virtual reality developer with an uncertain future at her feet.

"I was playing games and I knew that there was art there," Pinnick said. "I just didn't put two and two together." 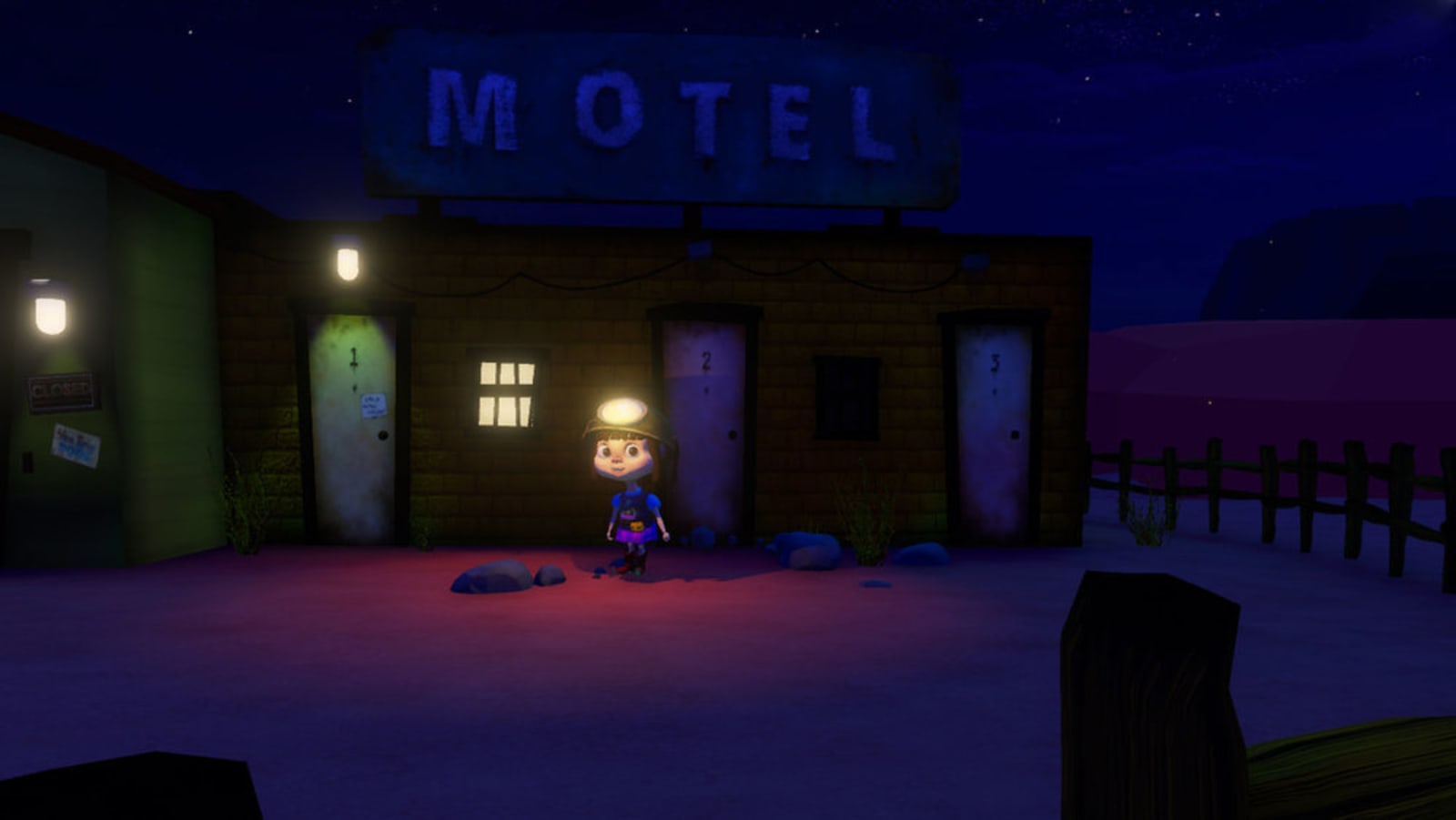 Before graduating in 2015, Pinnick carved a unique path for herself at ArtCenter College of Design, a school that offered traditional art training but hadn't yet embraced programming as a creative outlet. In her final semester, it seemed like the school might never include game design in its degree offerings -- some teachers didn't even know how to hold a video game controller, let alone create an interactive, digital experience.

So, Pinnick taught herself how to build a game. She watched YouTube tutorials on Unity development and trawled VR forums late into the night. Pinnick is an agile learner -- she soaked up the basics of VR programming and animation like a sponge, and used that knowledge to create Dead Bug Creek, an action-adventure game for the Oculus Rift Crescent Bay headset. It was set in a quirky 3D world reminiscent of Courage the Cowardly Dog, and it served as her final project in a high-stakes exhibition class. She got an A. 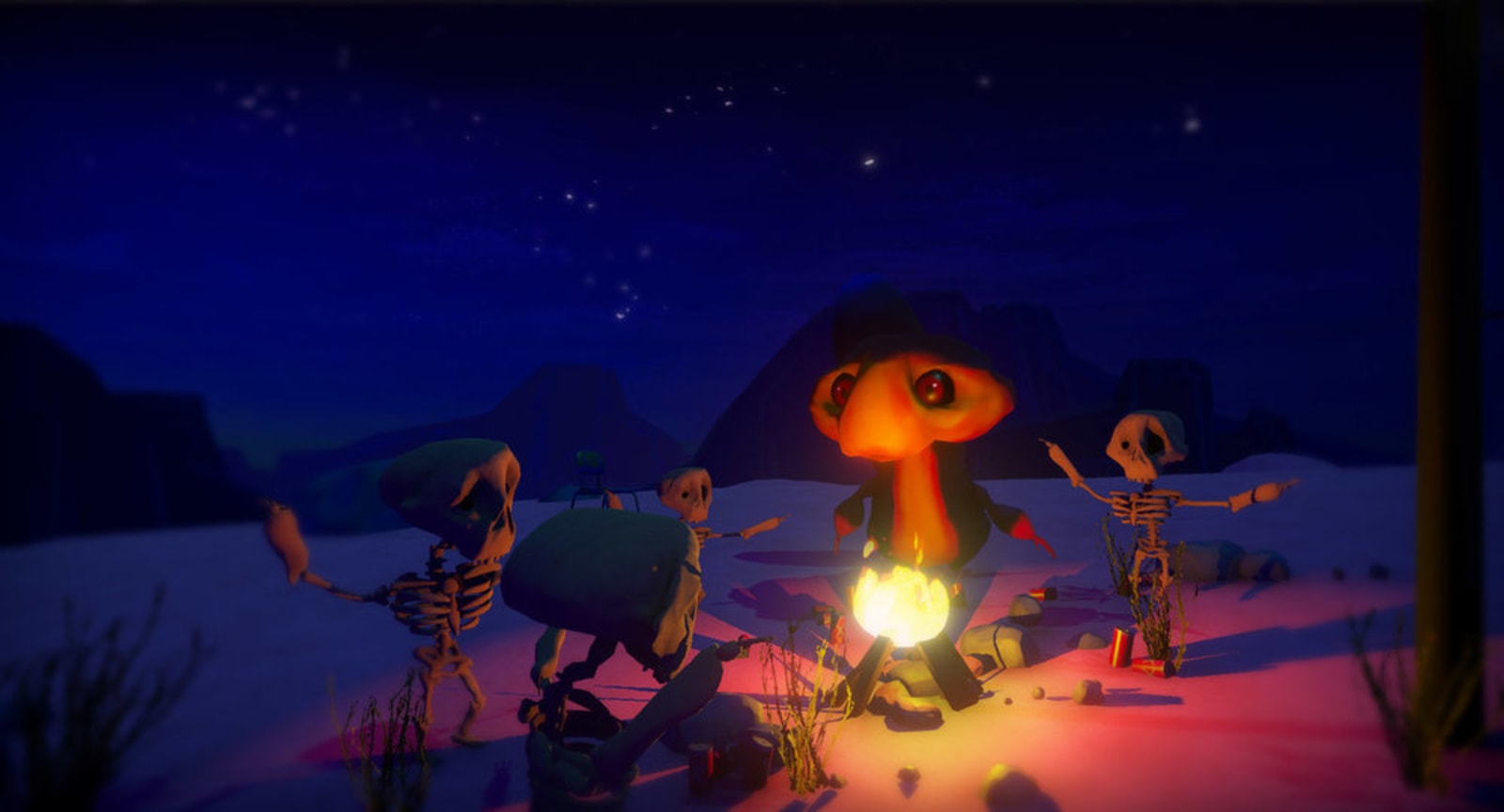 But on the eve of graduation in 2015, Pinnick couldn't think of any careers that blended her loves of engineering and art. Technically, it would be the job of her college -- the professors, mentors and alumni -- to introduce her to suitable career paths in gaming or software development, but ArtCenter wasn't equipped with that knowledge. If Pinnick wanted to exhibit at a gallery or dive into filmmaking, ArtCenter had her back, but the school didn't even have a game design program, let alone contacts in the wider tech industry. 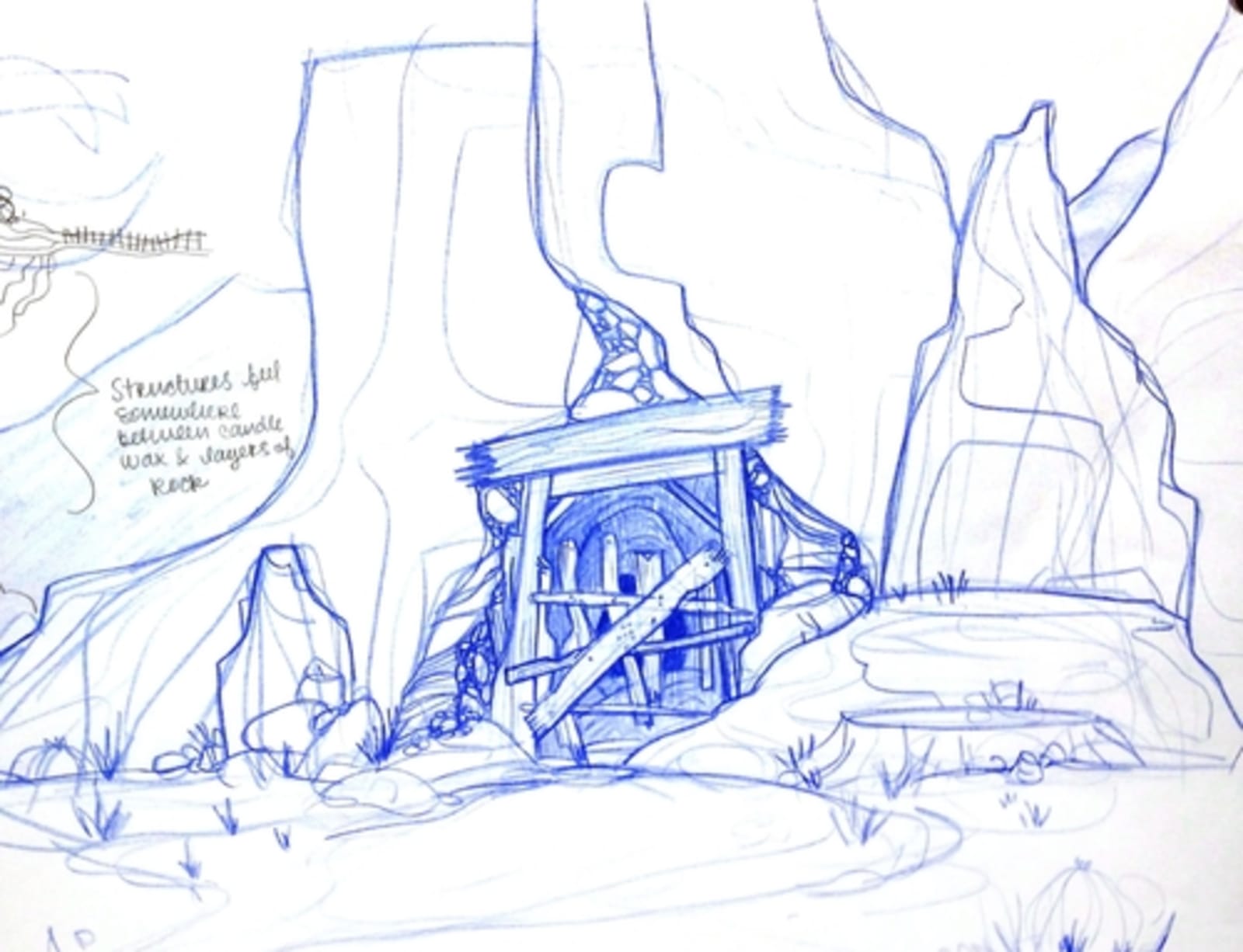 "I didn't know, because I come from this traditional-art background, that there was actually a job in the video game industry for being a part of this gray space between art and engineering," Pinnick said. "It's called technical artist."

Pinnick's individuality and drive set her apart at ArtCenter, even if her teachers didn't fully understand her digital-first approach to design. She was invited back after graduating to teach some classes -- one was a course on VR and indie-game development for kids ages 9 to 14, and another was a pilot class on VR development for students across disciplines.

Pinnick also displayed Dead Bug Creek at SIGGRAPH 2015, and she was invited to speak about the VR revolution at The Illustration Conference in 2016. 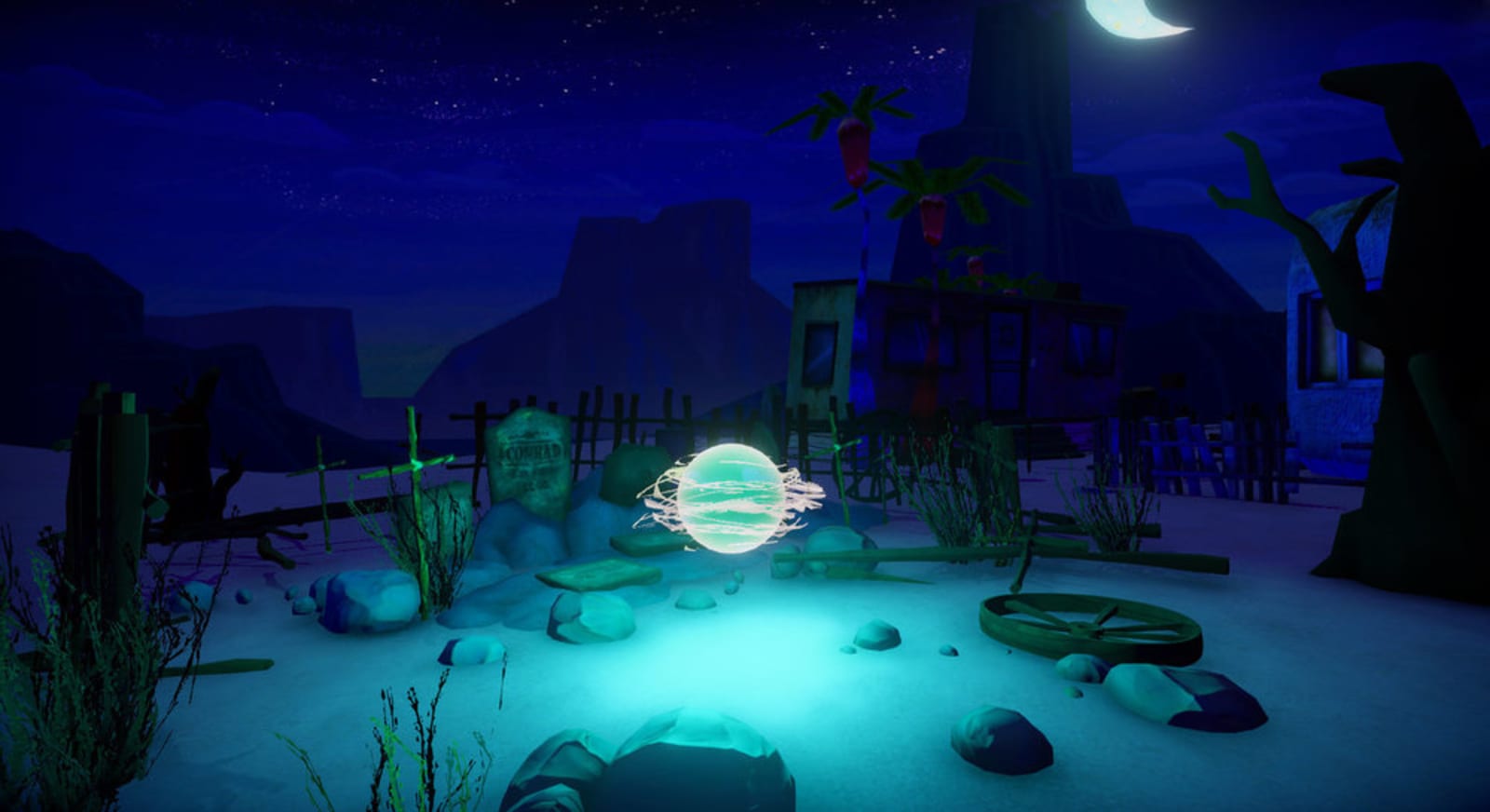 "I gave my talk with [Voices of VR podcast host] Kent Bye, who is a really awesome guy," she said. The two discussed a range of topics, but one conversation in particular resonated with Pinnick. "His perspective at the time was that we're moving away from the information age to the experiential age with things like VR and immersive technology, and even Snapchat. It's so much more about expressing a moment or being immersed in a world than it is just having access to information."

"I just didn't realize that there had been people who were doing those things."

Pinnick worked at ad agency Part IV for about a year after graduating from ArtCenter, building VR and AR experiences for major brands like Disney's Alice: Through the Looking Glass. Mostly, though, she was working on illustrations, layouts and campaigns -- traditional work, from an art school's point of view. She wanted to get her hands on more VR and AR code, so she started scouring job sites for anything that came close. One day, she stumbled across an opening at Google that screamed her name.

"I read the job description for the Google job to work on Tilt Brush as a technical artist, and I was like, wait, this is exactly what I like to do," Pinnick said. "I just didn't realize that there had been people who were doing those things."

Pinnick applied, had an interview, and hit it off with the Tilt Brush team right away. "We just got along really well immediately," she said. "It was like we were friends."

She joined Google as a contractor for roughly a year before being hired full-time in late 2017. Today, Pinnick is a VR technical artist at Google, where she's helping to build out the company's AR offerings.

Playground overlays adorable or branded objects on the physical realm, as seen through a smartphone screen. Google introduced Playground to the world at its Pixel 3 event in October, showing off AR animations of Iron Man, The Hulk and rapper Childish Gambino.

"This time last year, we were working on a bunch of different ideas about what we could do in AR, and ended up pairing up with a bunch of people who had been working on AR Stickers, and grew our ideas into Playground," Pinnick said. "What I do now is a mix of art direction and still the technical art stuff, which is bridging the gap between the more art-focused people who might be doing concept design or UI design, and engineering. So sometimes, I'm writing code. Sometimes, I'm working on UI. Sometimes, I'm doing other things."

Pinnick thrives when picking up new skills and using cutting-edge tools, which makes her a good fit for Google's AR squad. Most of her colleagues studied physics or computer science in college, so she's learning a lot from them. Meanwhile, her art school background is a resource for the team's more creative or design-based problems.

One unexpected bright spot of her job has been the exposure to machine learning and computer vision, two areas of computing that Pinnick never thought she'd get into. She recently worked on a feature that would suggest AR content to users based on where they are and what's around.

"It was really, really fun to try to figure out this strange set of signals."

"It's basically trying to art direct this algorithm to display the things that feel most relevant to users, but it's all hand-authored and I authored all of it," Pinnick said. "But it was really, really fun to try to figure out this strange set of signals. ...It feels like a collage. I just have these different pieces and I'm trying to put them together in a way that makes sense. We're working with a pretty broad team that's making a bunch of amazing content, we're making all these beautiful stickers."

Pinnick's passion for art and engineering is obvious, and it's even more remarkable considering she didn't know her job existed two years ago. While Google keeps her AR, VR, AI and coding skills fresh, she recently returned to her roots as an artist with a series of hand-drawn comics documenting the minutiae of daily life. They're powerful scenes, packed with introspection, observation and a witty detachment.

"A way that I try to calm myself down or center myself is also by drawing," Pinnick said. "And drawing, just like pen and paper, is much more relaxing for me. I think I've just been coming back to it because everything I've been working on has been very, 100 percent digital. It's been nice to balance it a little bit, even in my free time."

ArtCenter is also finding its balance. Now that Pinnick has helped to prove programming has a place in art school, ArtCenter is starting its first-ever Game Design degree track this fall, nestled within the Entertainment Design program. The course description calls out how much money the video game industry is worth (revenue surpassed $30 billion in 2016), and mentions esports, mobile gaming and even indie development as solid career paths. The track blends technical training with the foundations of artistic expression -- a lot like Pinnick does in her job today.

"Everybody that I work with who is from the Tilt Brush team and a lot of the folks on the broader Playground team, they come from video games and entertainment," Pinnick said. "A lot of them are from Pixar or ILM as well. They ended up here at Google. A lot of us really just care about making fun, creative things, whether or not we're writing code or making art, and I think that common goal is really valuable."