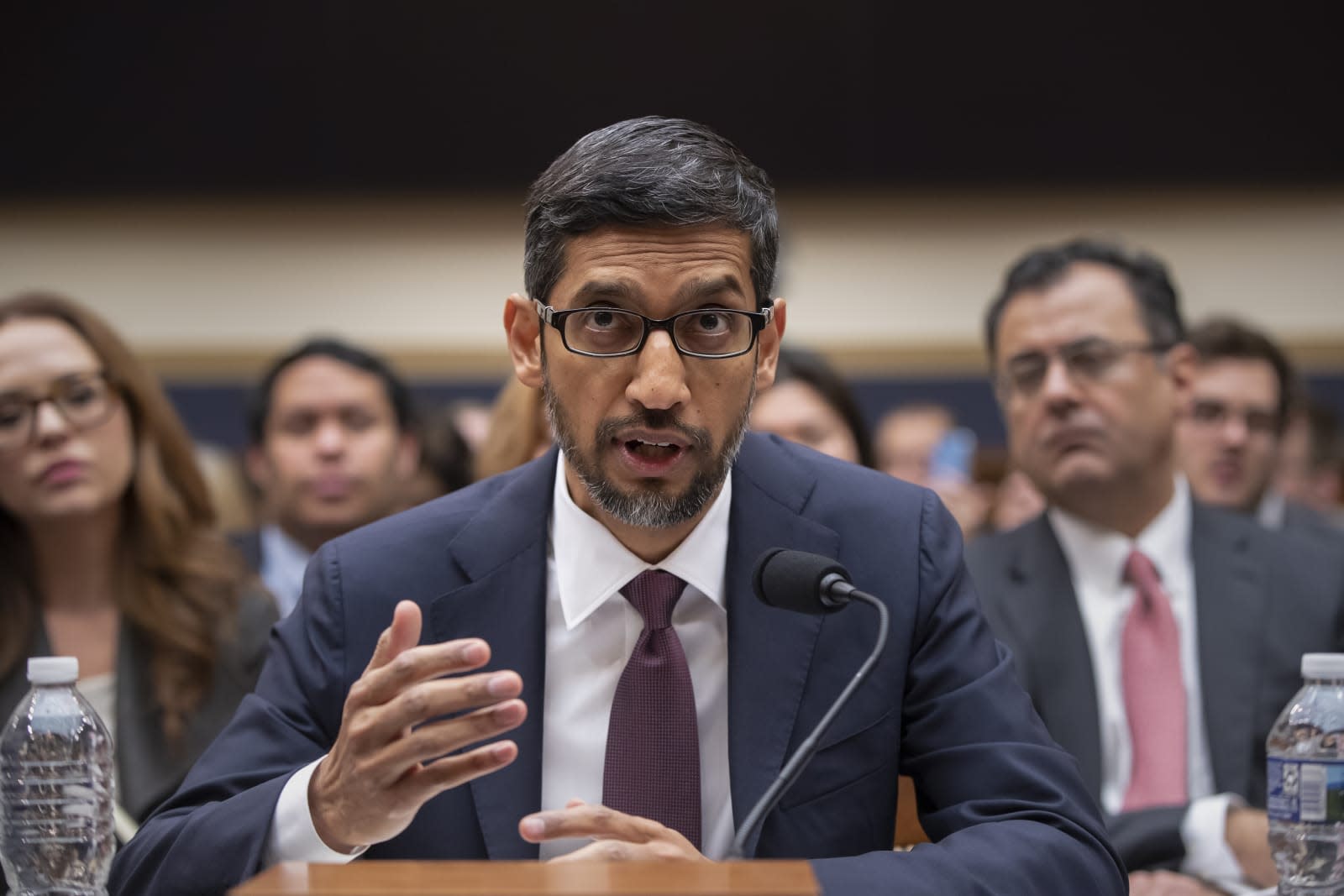 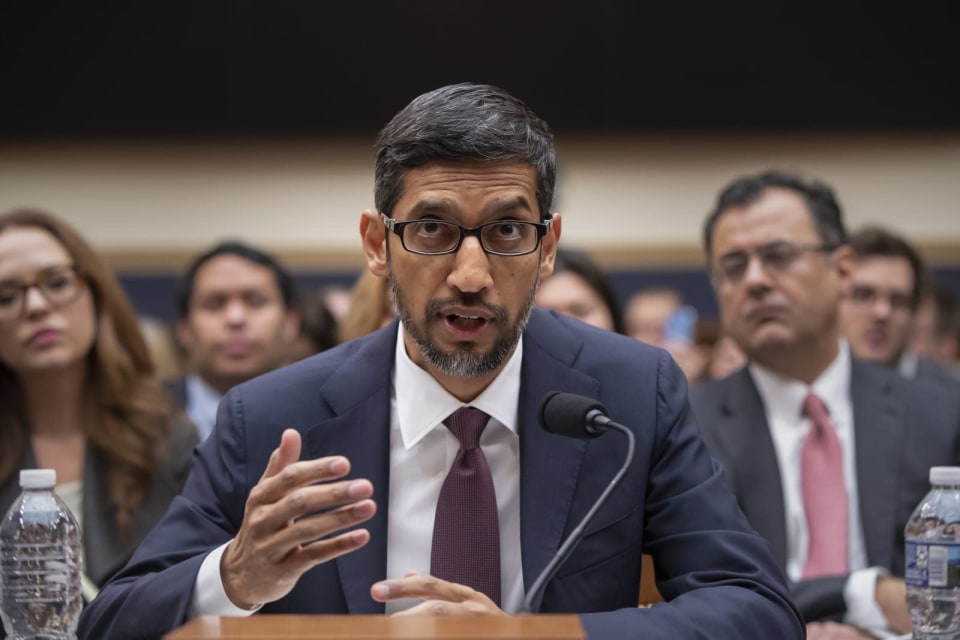 We all know how these things play out: A tech CEO is sworn in and then is railed at for a couple hours. Some of the representatives will rage against what they see as unfairness, some will scream bias and others will print out pages from conspiracy theory websites. If we're lucky, we'll get a question about something that's pertinent, although it's rarely followed up on.

The latest episode featured Google CEO Sundar Pichai at a House Judiciary Committee hearing, answering questions on behalf of the company. In many ways, the empty chair-ing of this hearing earlier in the year was the right way to play these events, which are little more than an exercise in point-scoring theater. Nobody's minds were changed yesterday, and everyone came away believing that they'd won.

In a scene reminiscent of A Confederacy of Dunces, the House Judiciary Committee was striking back against these California "communiss." Claude Robichaux, here played by Bob Goodlatte, suggested that Google was indoctrinating a new generation of bleeding-heart liberals. Clearly, he's never spent any time on YouTube, arguably the far right's most effective recruiting tool.

Thankfully, Rep. Steve Chabot was able to explain Google's legendary history for bias with an anecdote of his own -- specifically that when he was working on a way to repeal the Affordable Care Act, all the comments he found online were negative. Similarly, Chabot railed against the tidal wave of critical press that surrounded the 2017 tax cut, which unfairly excluded conservative points of view.

"I do a weekly blog, I have been doing it for the better part of nine years. A while back, Republicans in the house passed legislation to repeal and replace Obamacare. Our bill was called the American Health Care Act or the AHCA.

When I was writing about that, I Googled American Healthcare Act, and virtually every article was an attack on our bill. Article after article alleging that our bill would result in millions and millions of people losing the great care that they were supposedly getting under Obamacare.

I would argue that was completely false, but it wasn't until you got to the third or fourth page of search results that you found anything remotely positive about our bill."

-- Rep. Steve Chabot on the ACHA

"Article after article attacking [the] Republican tax cut plan, alleging that the tax cuts only went to the rich. Once again, to find any article that had anything remotely good to say about our plan, you had to go deep into the search results."

Chabot's implication is that Google was somehow engineering its search algorithm to only display negative comments on the bill. But if Google had this power, do you think it would have linked to Holocaust-denial sites when people searched for "Did the Holocaust happen?" Not to mention that Google has no control over the Congressional Budget Office, which loudly dissed the cut.

In truth, attacks on the AHCA didn't just come from nakedly partisan sources on the left of the political spectrum. The Economist, Fox News and The Wall Street Journal are all right-leaning outlets that called for reform or repeal of the Affordable Care Act. All were critical of the bill or reported criticism from other sources, but at no point did it occur to Chabot that he'd done a bad job.

It's fairly well-known that Google merely reflects what's being put into its search box, especially around trending topics. The search engine was indexing the current political discourse rather than shaping it. This hearing was little more than an attempt for some lawmakers to try to prop up a flimsy conspiracy theory that collapses under any scrutiny.

The committee members were mostly unable to ask smart questions because they don't understand how Google works. Politicians being clueless about tech is common, and hearings like this highlight how you can't police something if you don't know what's going on. It's concerning that few of these officials seemed interested in learning, even if -- surely -- they have well-paid advisers who could educate them.

"I have an iPhone, and if I move from here, go over and sit with my Democrat friends -- which will make them real nervous -- does Google track my movement, yes or no?"

Time and again, officials sought binary answers to questions where a yes/no response was clearly inappropriate. Rep. Ted Poe held up an iPhone -- an iPhone! -- and asked if Google could track his movements. Pichai tried to explain, saying that it depended on if you were using one of Google's products, but came off as him being evasive.

Were I in his shoes, I would have said, "Look, asking me about an iPhone is akin to hauling the CEO of GM in here and asking about your Honda. It's a different platform, made by our corporate rivals that I am not responsible for. If you activated one of our products, like Waze, then of course we'd track you. That's how map apps work." That may have done enough to deflect accusations that Google is monitoring where its users go all the time.

Pichai could have done better to prepare himself for the sort of questions that were coming at him. Google's lobbyists are all over Washington, DC, and he can probably command a small army of Ivy League debating champs to help. When asked about advertising rates for political candidates, however, Pichai failed to explain clearly that the ads were priced by demand, not for a candidate. As soon as he began to waffle about the blind-auction process, he lost the room.

Because of the performative-victimhood show, it took more than an hour before anyone asked Pichai a direct question about Dragonfly. The existence of a China-only, censored search engine project has been an open secret for months and has caused much consternation. After all, Google's stated aims are to provide people with information, not to kowtow to authoritarianism. Pichai gave a non-answer, too, saying that there were "no plans" to launch such a product.

There were a number of topics that would have been appropriate to ask Sundar Pichai about right now -- like Google's allegedly anticompetitive practices, its policies for military AI, who ordered the creation of Project Dragonfly and why it exists at all. What is it doing to mitigate its monopoly on search, and why is it deleting adult content from private GDrives? Or why did the company pay one executive $90 million to leave after a sexual harassment investigation?

In the words of Rep. Ted Lieu, "a significant portion of this hearing was a waste of time." Someone had to say it.

In this article: gear, google, HouseJudiciaryCommittee, internet, politics, SundarPichai
All products recommended by Engadget are selected by our editorial team, independent of our parent company. Some of our stories include affiliate links. If you buy something through one of these links, we may earn an affiliate commission.