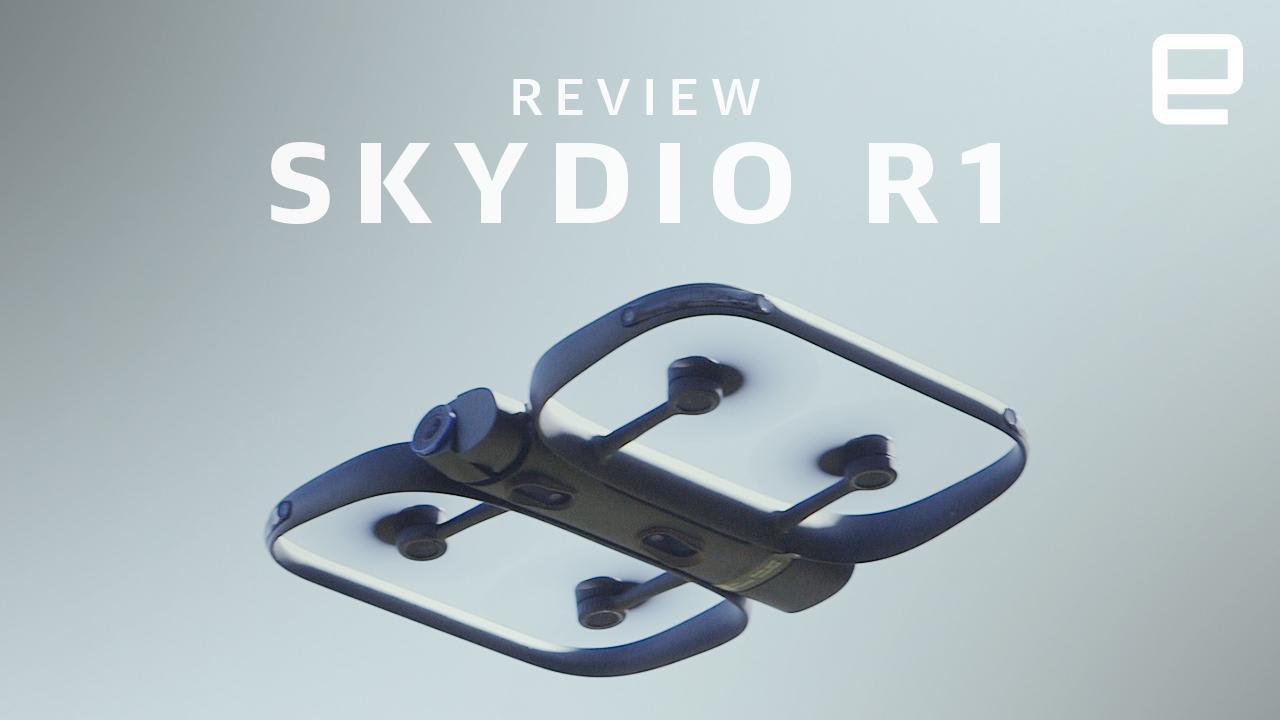 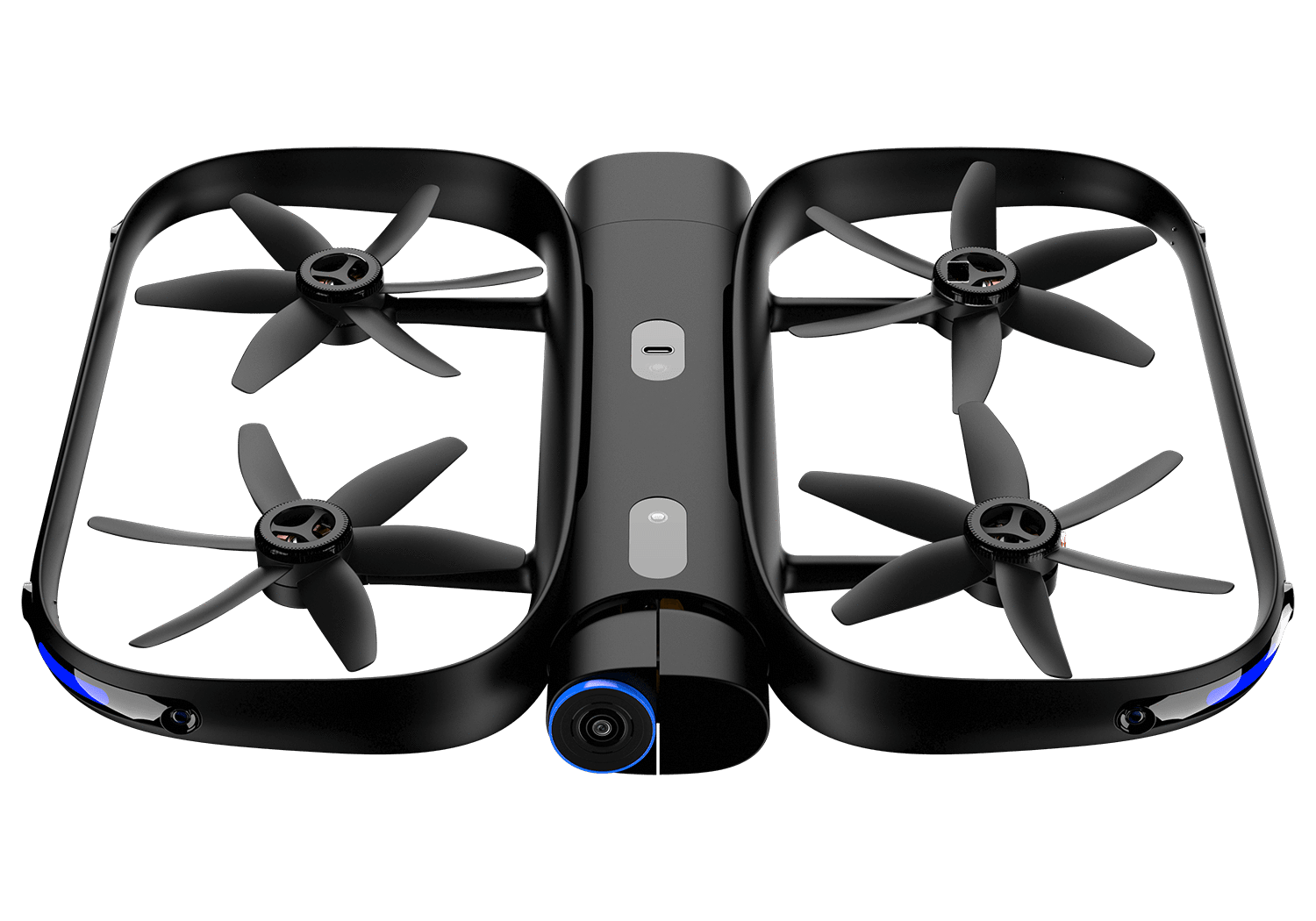 In a park, perched on San Francisco's East Bay, I set down Skydio's R1 drone, open an app on my phone, click "launch" and do something I would normally never do. I walk straight under a tree, knowing full well that the R1 will follow me and that the branches are directly in its flight path; I am trying to make it crash. I fail. I repeat this task a few more times, even with the drone flying backward, but try as I might, the R1 slips right under (and sometimes over) the tree's canopy. I am doing nothing but walking, no controller or phone in my hand; the R1 is figuring this all out by itself.

Should I be surprised at this? In theory, no. When drone newcomer Skydio recently revealed the self-flying R1 ($2,499), the main selling point was its superior ability to follow a target and avoid obstacles at speed. But drones have offered various versions of follow-and-avoid for a while, and in my experience, none has really nailed it. Hence my surprise at how deftly the R1 avoided Californian topiary, right out of the box.

At a technological level, the R1 is truly impressive. It eschews flaky GPS or wearable trackers for smart 3D vision tracking, and it works! This is the first “true” follow-me drone that delivers obstacle avoidance from all angles at speed. This, combined with ease-of-use and a high quality camera, make it a tantalizing proposition. Sadly, one only available to those with deeper pockets.

Be the first to review the R1?
Your ratings help us make the buyer’s guide better for everyone.
Write a review

Skydio describes the R1 as a "self-flying camera." It's not unusual for companies to emphasize the photography component over the drone itself. But, perhaps for the first time, Skydio is doing itself a disservice. Yes, the R1's primary function is to record video (up to 4K) of you living your best life, but the exciting part is the drone itself. It's equal parts terrifying and exciting to watch the R1 duck and dive sign posts, benches and tree cover. Trying to fool this thing became a game. A game that the R1 usually won. 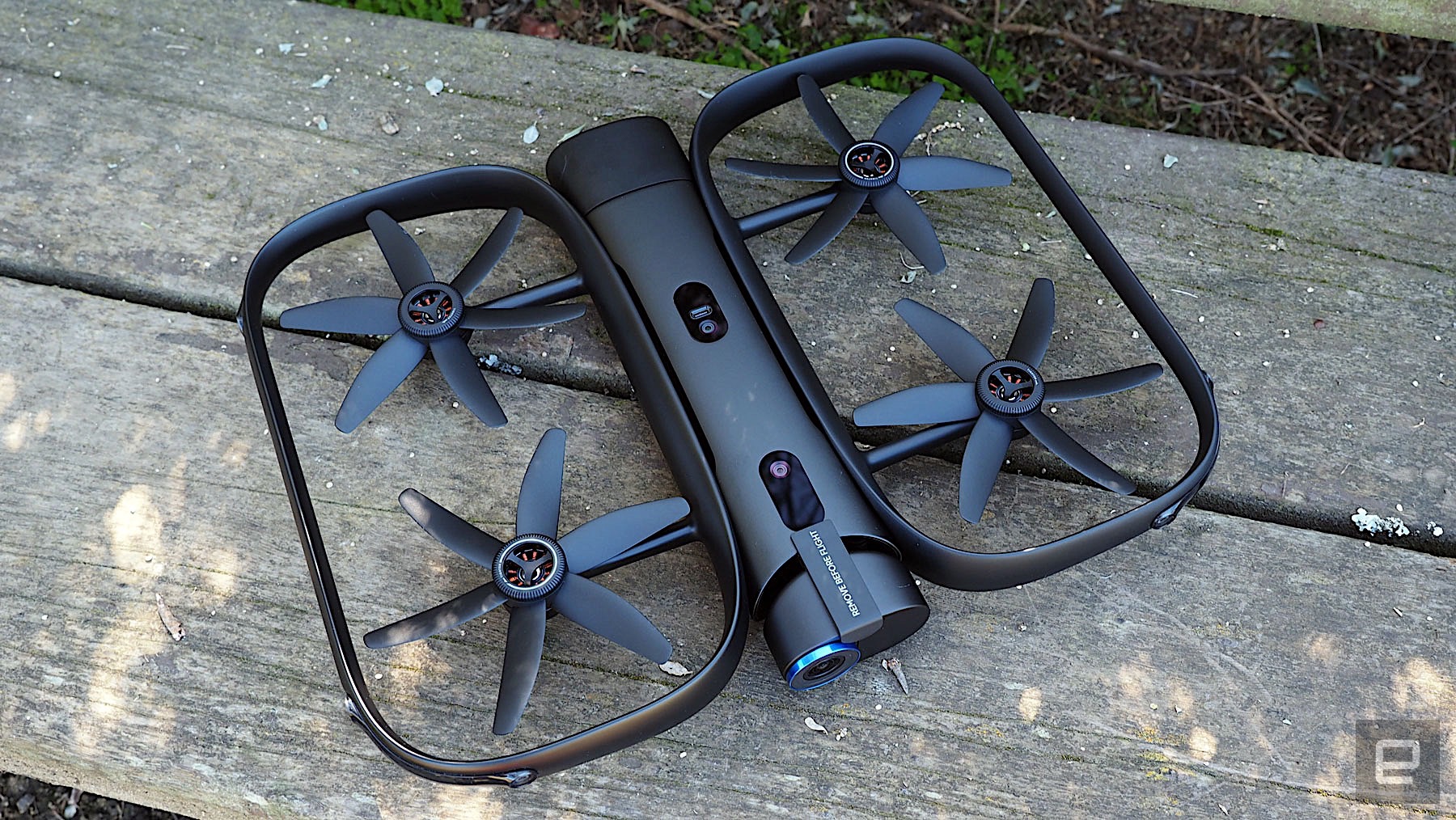 The drone is an unusual beast. The body is long and slim with little in the way of detail beyond a few camera lenses pointing up and down; a USB-C charging port; and the primary camera on the front (on a two-axis gimbal). The customary four propellers are surrounded by a prop-guard, which can't be removed (for good reason -- it houses all the cameras that the R1 uses to see). This means the R1 cuts a weird shape. It's flat (1.5 inches tall) but wide (13 by 16 inches). It's about the size of a large pizza box. So, it's not the most portable device, even though Skydio claims you can put it in a backpack (it'd be a tight squeeze).

After the basic "tree" test, I decided to up the ante. Could the R1 keep up with me on an electric skateboard? Skydio is pitching the R1 at the action-sports crowd, after all.

Even though the R1 "flies itself," you do have some control. Using the mobile app, you can move the drone up and down or toward and away from you (which the app confusingly calls "zoom"). You can also yaw (spin on its central axis) to tweak what's in the frame and pan the camera up or down. Once it detects people, the app identifies them with a crosshairs icon that you tap to designate who you want to follow.

From the app, you can also choose different tracking modes, all of which are fairly self-explanatory: follow, lead, side, orbit and tripod. The latter has the R1 remain put, but rotate to keep the moving subject in frame -- ideal for in the middle of a wakeboard circuit or skatepark. You can change these modes mid-flight too, and the R1 seamlessly switches. 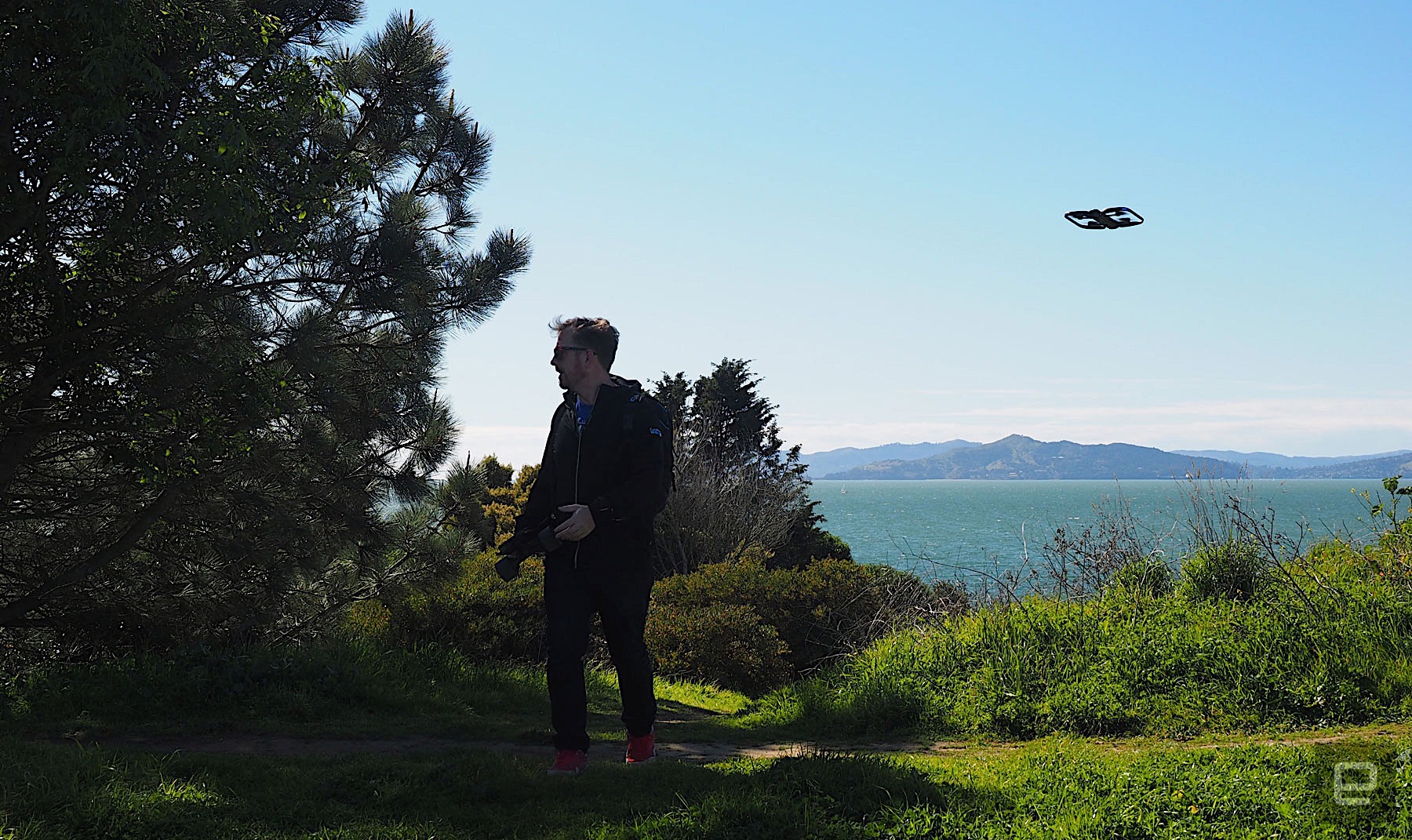 On the electric skateboard, I tried "side" mode, so that I could capture the bay and the San Francisco skyline behind me as I moved. I was riding on a rough path, so getting good speed was difficult, but at around 13 mph, the R1 was doing a good job of keeping up, battling the bay breeze, leaning into the wind sideways. It was only when I spotted a signpost in its path (to the drone, sideways on) that I realized how much it was having to do. The signpost came, and the R1 gently moved up and over it without any fuss.

With my confidence in the R1 growing, I figured orbit mode was about as big a test as you could throw at it. This means, not only does the R1 have to track me and move around me in a circle, it also has to keep track of obstacles as it goes, and move up and down as the path I'm riding on undulates. I don't want to gush, but it was pretty impressive to watch this thing go, forcing itself (once more, against the wind), to rotate in front of me, then behind, then back again, while I rode down the path.

As tricky as all that was, the area I rode in was fairly open, barring some signs and a bank of grass. How would it fare through a trail totally covered in trees? It turns out, once again, surprisingly well. As I walked into the overgrown tunnel, the R1 took it all in its stride and cut a safe line through all the trees. This is something a DJI Mavic could theoretically do, but in my experience, such a confined space tends to trigger its sensors and stop it in its tracks.

The whole experience wasn't perfect, though. Once or twice in my testing, I managed to outpace the R1 (top speed: 25 mph), or at the least outpace the camera, as it lost track of me, resulting in the drone coming to a standstill. It only took me walking back into the frame for it to pick me up again, but it is possible for it to lose you. 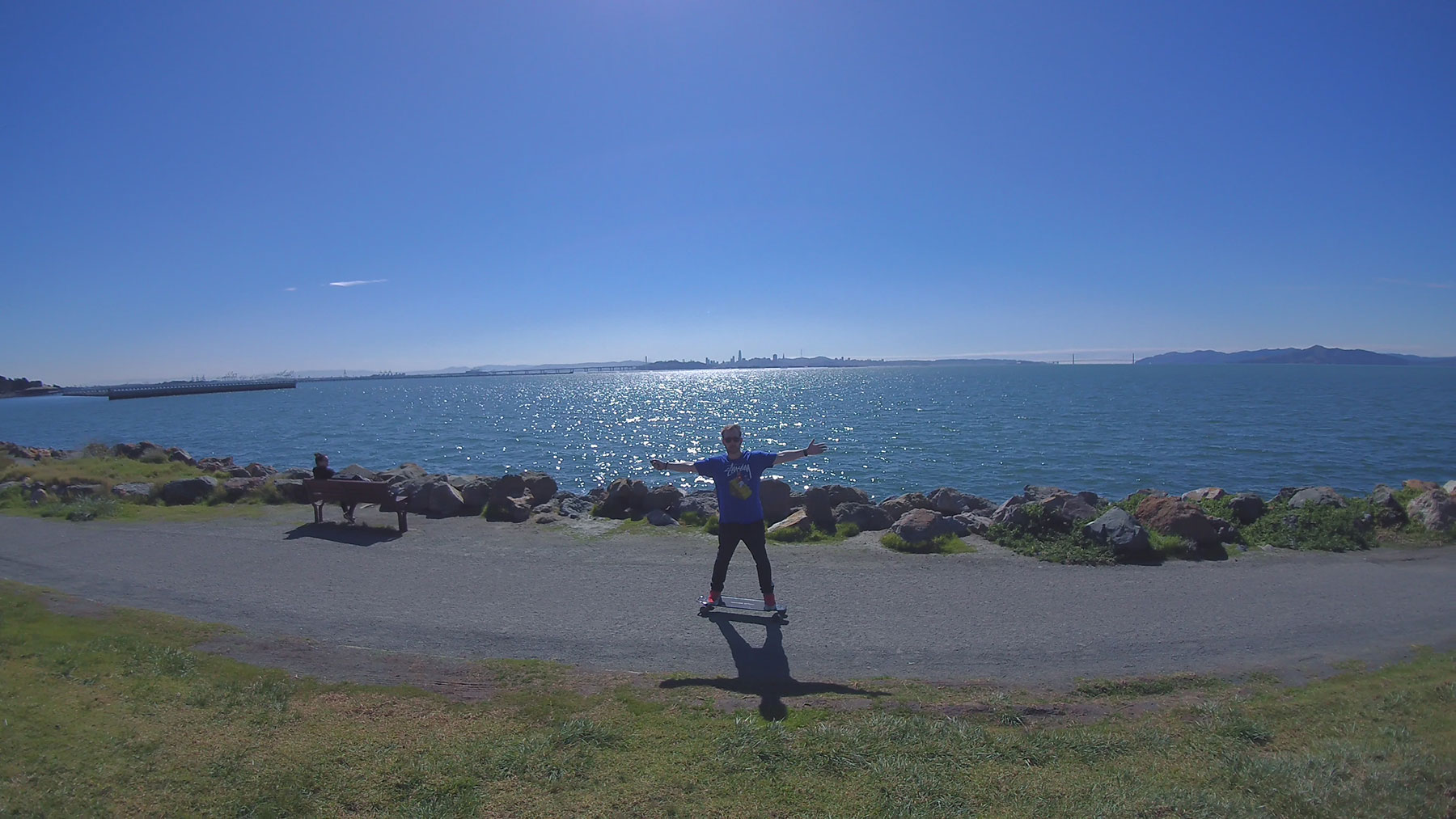 Also, the battery life -- a modest 16 minutes -- could be a limiting factor depending on what you're doing. That's the max you can hope for, too. In my case, San Francisco's power-sapping breeze didn't help. The main challenge is that when the battery runs out, the R1 just stops and touches down. So, depending where it is, the landing might be a little hairy. One time it ran out while mid "orbit," it took me a while to realize what was going on (I thought it lost sight of me at first), but it made a relatively safe landing without issue.

Normally having a drone fly itself gives me the willies, even when I can take over the controls. With the R1, reclaiming control isn't that simple, but I never once felt I had to, and I quickly gained faith in its ability to spot and avoid obstacles.

Another surprise with the R1 is how simple it is to use. I've flown several video drones (DJI, AirDog, Yuneec, Karma, etcetera), and they all require some degree of learning or oversight. Whether it's confusing apps or too many controls to master, it's often a little too easy to miss your shot, or worse, not record anything at all.

The R1 addresses most of this by whittling the controls down to basically nothing. It starts recording the moment you take off, there 64GB onboard storage (good for about an hour and a half of 4K, over four hours at FHD/30 video), so you never have to worry about forgetting the memory card. (The downside: you can forget to clear space on it beforehand.) The R1 comes with two batteries, so you're looking at about 30 minutes of 4K per outing, so you only need to remember to delete files every three sessions or so.

Navigating the app is a breeze. Once you've gone through the initial setup and tutorial videos, everything's pretty much on one screen. This is where you'll find virtual controls for moving the R1 around in the air, and flight mode options. And... that's largely it. Like I said, the camera starts recording at take off, stops when it lands. After that, the app offers up the chance to create a quick lower-resolution clip (or pull a still frame/photo) to share on social media directly. (Otherwise, you need to connect the drone to a PC to transfer the files later.)

The more I flew the R1, the more I enjoyed it. The simplicity, combined with the clever technology conspire to make a truly user-friendly experience. The image quality from the camera is on par with what you'd expect from a GoPro (but with less fish-eye by default). The only real problem is the price.

For the $2,499 that Skydio is asking, you could buy three DJI Mavic Airs, or even a combo Mavic Air and Mavic Pro Platinum and still possibly have some money left over. For budding aerial videographers, that would give you more features and more flexibility (the R1 can capture establishing shots, but it's limited in control). The narrower focus of the R1 and its higher price will make is a hard sell for most consumers; something more for the heli-ski crowd. 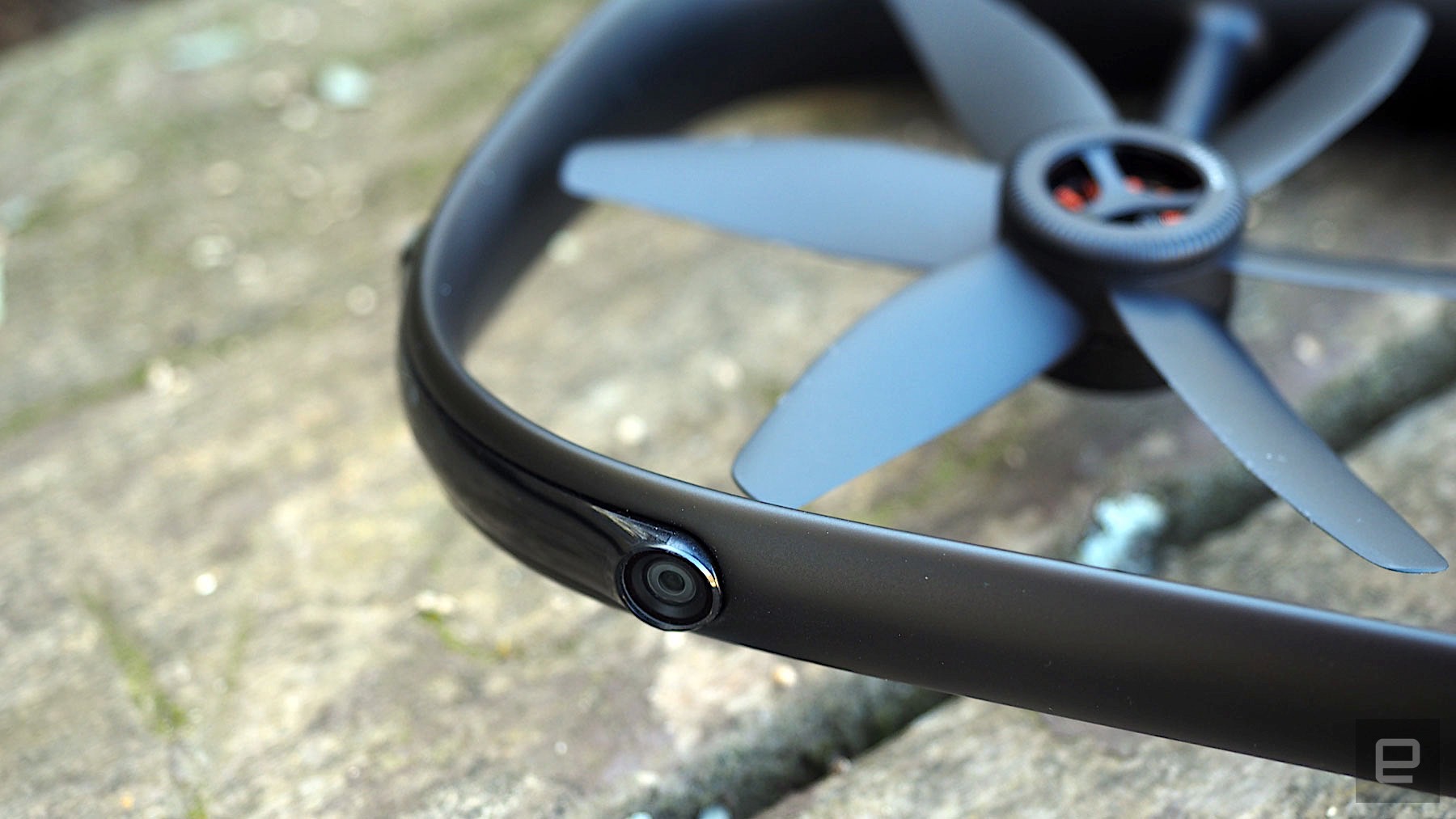 Skydio assures me that the R1 will actually get more features over time via updates. This is good news, and I'm excited to see what's in the pipeline (and if that changes the value proposition), but for now it's still a steep entry point that even Skydio admits is better suited to athletes and professional content creators.

And that's a shame. Skydio has created something that pushes self-flying drones forward. A drone that can truly navigate on its own, at speed and that's incredibly simple to use. For the action-sports crowd, this is about the best thing on the market right now, if you can afford it. If not, let's hope that Skydio is able to sell enough to scale its operation to the point where it can take on DJI, even if it's still at a premium. We need more competition in the skies, and right now (from the US, at least) and Skydio clearly has the technology, but can it win over buyers?

In this article: 4k, actionsports, camera, cameras, computervision, drone, engadgetoutdoors2019, follow, gadgetry, gadgets, gear, quadcopter, r1, review, robots, skydio, video
All products recommended by Engadget are selected by our editorial team, independent of our parent company. Some of our stories include affiliate links. If you buy something through one of these links, we may earn an affiliate commission.