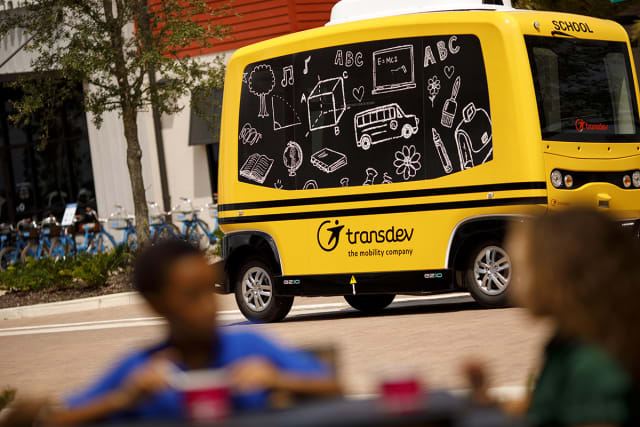 Sorry kids, neither you nor robots can be trusted. The US Department of Transportation's National Highway Traffic Safety Administration (NHTSA) has told Transdev North America to stop hauling children around in its EZ10 Generation II autonomous shuttles in Babcock Ranch -- a community in Southwest Florida.

It seems that the NHTSA has some safety concerns. "Using a non-compliant test vehicle to transport children is irresponsible, inappropriate, and in direct violation of the terms of Transdev's approved test project," NHTSA Deputy Administrator Heidi King said in a press release.

Earlier this March, NHTSA approved Transdev to test and demonstrate its autonomous shuttles. NHTSA claims the agreement never included actually transporting children as if it were a school bus and Transdev did not receive permission to do so. The NHTSA claims that regular yellow school buses go through "rigorous" standards to ensure kids are safe.

Either way, it took the NHTSA over a month to respond. Transdev announced its plans in early September, and even released a upbeat orchestra-backed launch trailer showcasing its vision of the future.

While the shuttles are autonomous, it doesn't mean it's unmanned. A safety operator is on board while students are riding to ensure smooth operation. Top speed for the shuttle is currently 8 MPH. There were plans to push speed further, but that might be in limbo now. And Transdev isn't the only company experimenting with futuristic school buses. Both Daimler and Google have announced plans for electric, WiFi clad buses as well.

Since NHTSA's cease and desist, Transdev has not commented on Twitter or put out a press release in response to the action.

Via: Jalopnik
Source: NHTSA
In this article: autonomous, children, departmentoftransportation, dot, gadgetry, gadgets, gear, kids, NationalHighwayTrafficSafetyAdministration, nhtsa, school, schoolbus, transdev, transportation, usdot
All products recommended by Engadget are selected by our editorial team, independent of our parent company. Some of our stories include affiliate links. If you buy something through one of these links, we may earn an affiliate commission.