The company also introduced a smart laundry pair and a KitchenAid smart oven.

These days, Whirlpool is more than just ovens and dishwashers. Over the years at CES, the appliance giant has proved it has some pretty serious tech chops as well. Earlier in the week, the company already announced that you can now control some appliances with a Wear OS device. Now, it's getting ready to unleash a slew of new and improved gadgets for the home. One of the most intriguing by far is a connected hub wall oven concept that apparently uses augmented reality to help you out in the kitchen.

Created by W Labs, Whirlpool's innovation incubator, the Whirlpool Connected Hub Wall Oven has a 27-inch transparent LCD interface on the front where a typical oven door would be. So you can still use it like a regular oven, but now you can also use it to view family calendars, or check out personalized recipe suggestions. According to Whirlpool, if it notices that there's only a 45-minute window for dinner, it'll suggest shorter, faster recipes too. And, of course, it's smart enough to only recommend recipes that fit within your dietary restrictions. There's even step-by-step video instructions via Whirlpool's Yummly platform that you can watch directly on the oven's screen.

The whole augmented reality part of the equation comes in when cooking. If you're a novice, for example, the oven will provide instructions right there on the screen on what rack to use or which cooking cycle. Or if you're following a step-by-step cooking guide provided by Whirlpool, it'll notify you right on the LCD screen what the next step is. Additionally, there's an "internal vision system" that essentially lets you zoom in on the food that's cooking to check out how it's coming along.

That's not the only thing Whirlpool is announcing. The company is adding even more features to its aforementioned Yummly app. For one thing, it's no longer just an app, it's now a full-on platform that serves both Whirlpool and KitchenAid brand appliances. There's an ingredient recognition feature that'll bring up just the right recipes based on what it detects if you happen to have a smart oven or a smart fridge, a new meal planning feature, and, of course, voice command capabilities so you can interact with that recipe without interrupting your cooking prep. 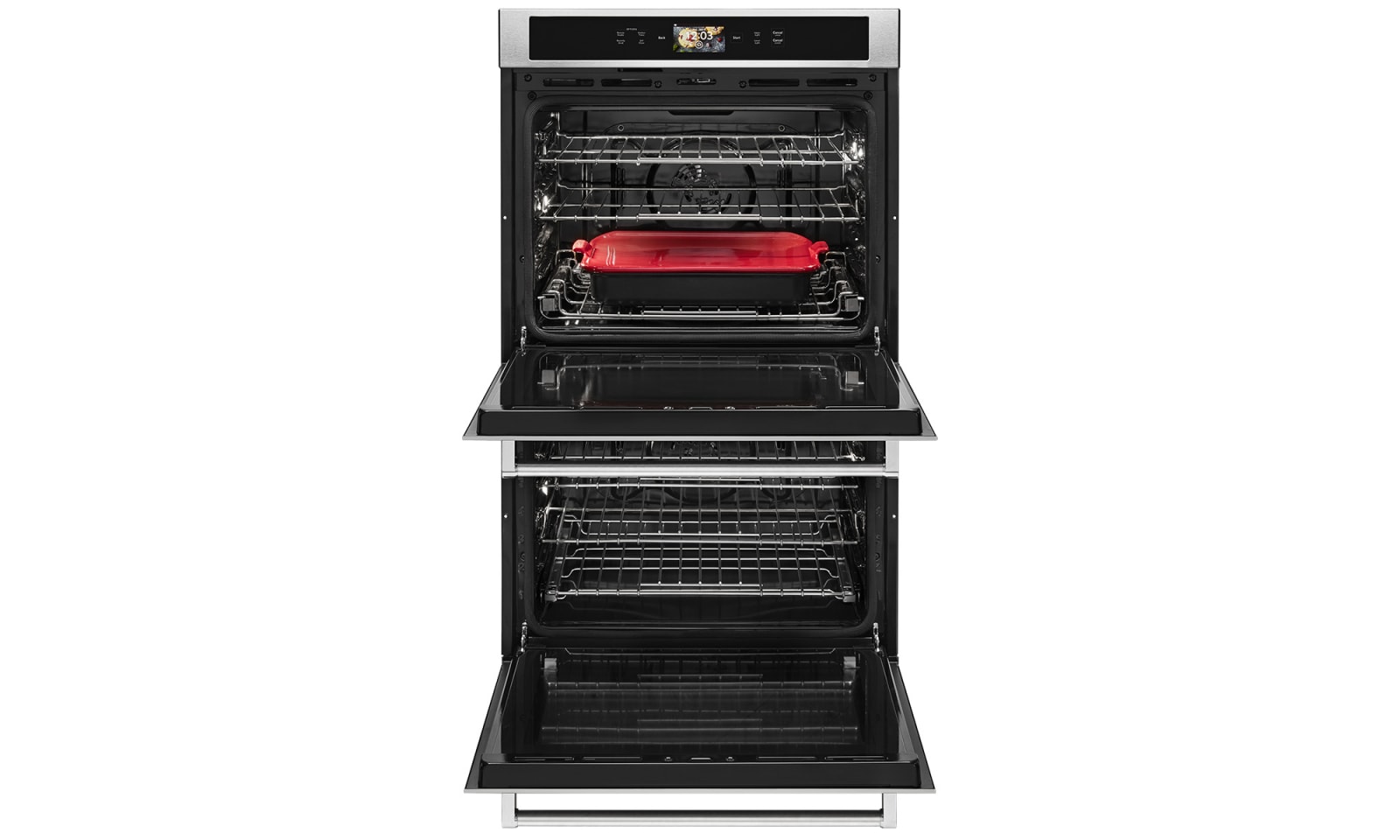 Not many people know that Whirlpool is also the brand behind KitchenAid, and it too is debuting a few high-tech items at CES. KitchenAid already revealed its Google-powered smart display yesterday, and now, it's set to reveal it's first-ever connected oven. It's simply called, well, the Smart Oven+, and you can install it in either single, double or combination oven configurations.

It features a 4.5-inch LCD display that lets you view and select a variety of different functions, and there's a KitchenAid companion app that you can use to remotely control the oven's timer or to simply keep tabs on how long until dinner will be ready. Of course, like a lot of other smart appliances these days, the KitchenAid Smart Oven can also be controlled via voice command; either through Google Assistant or Amazon's Alexa.

On top of all these smart features, the Smart Oven+ also has powered attachments for grilling, steaming and even a baking stone attachment, all of which promise better-cooked foods. Other functions include Yummly app integration and a convection oven mode. 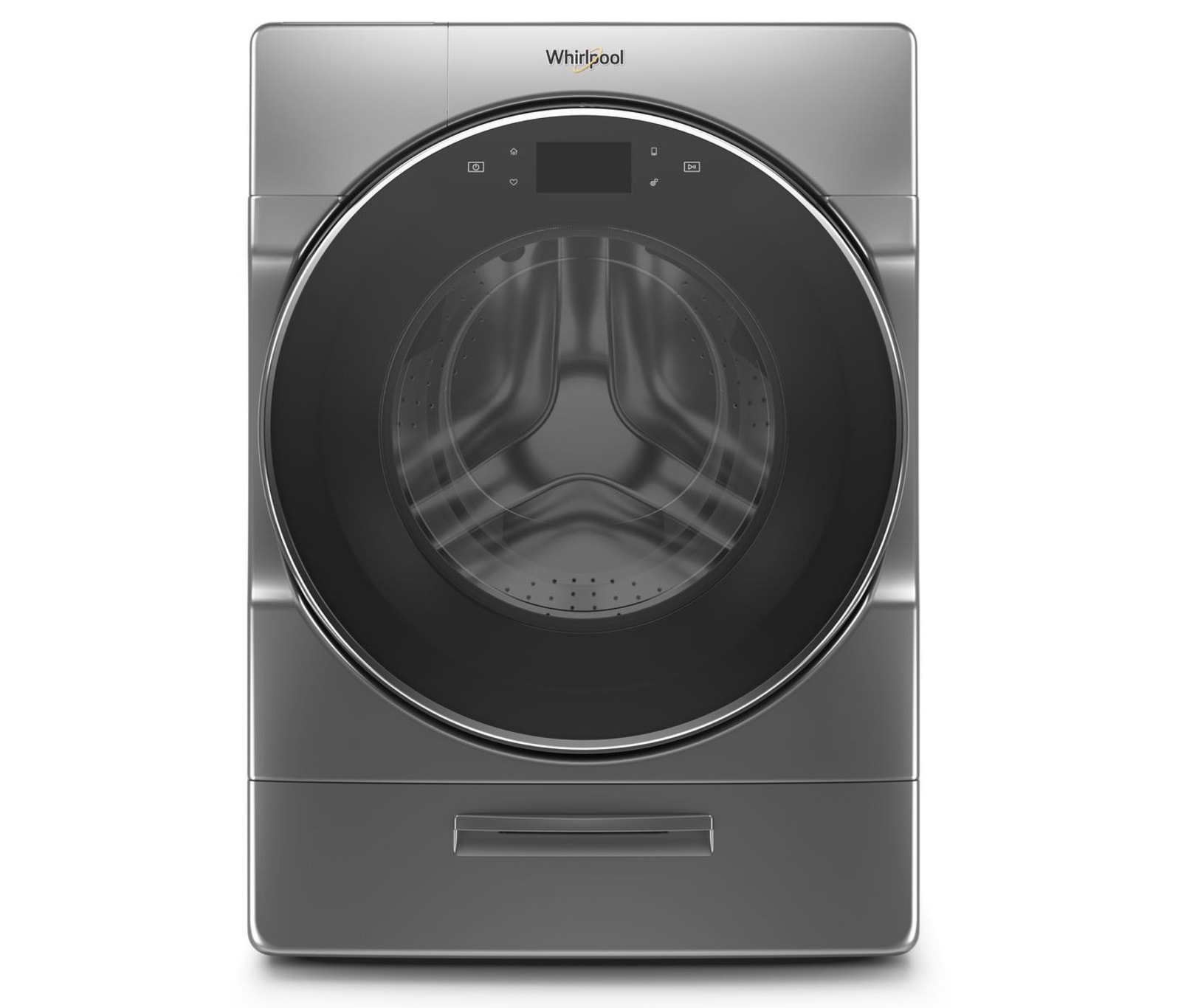 Plus, Whirlpool is debuting yet another smart washer and dryer. The latest version from the appliance giant is the Smart Front Load Laundry Pair, a washer and dryer outfitted with a touchscreen interface, detergent storage and, yes, voice control capabilities. Just like a lot of other appliances here at CES, you'll be able to talk to your Laundry Pair via Amazon's Alexa or Google Assistant. You can use your voice to ask how long the laundry is going to be, or maybe to add an extra rinse cycle.

As mentioned, it also has a "Load and Go" dispenser that you can load with detergent for up to 40 or so loads, so you can automatically dispense what's needed with a single press of a button. What's more, you'll be able to control your laundry with the Whirlpool app. It'll offer suggestions like the right kind of dryer setting for your load, assign family members laundry day tasks, and you can refer to a handy stain guide to know just how to treat that red wine spill. And, there'll also now an Amazon Dash laundry replenishment feature in the Whirlpool app too.

The connected hub wall oven is still a concept for now, and might never make it to your local kitchen store. The new and improved Yummly app, however, is available now. Pricing for the washer and dryer and the KitchenAid smart oven haven't been announced yet, but they're all set to debut in 2019.