Hot Wheels' new TechMods are remote-control cars you build yourself

It's a real step up from folding paper airplanes.
K. Naudus|02.14.19
@krisnaudus

Hot Wheels has excelled at merging the real and virtual worlds for the past few years, but a lot of that has been focused on the driving experience -- specifically, how to make it more like a video game, with toys like Hot Wheels AI, Mindracers and Augmoto. This year the brand is finally giving budding gear heads some love with its new TechMods set, an app-controlled vehicle that you build yourself and then control with your phone. It's not the same as tinkering under a hood, but it is actually fun to put together.

The kit comes with a plastic chassis, which consists of a battery, a motor and four wheels, two of which can be steered. There's a plastic frame that snaps onto the top of it, with the rest of the vehicle's body made up of precut plastic pieces that you punch out of several sheets and fold according to the in-app instructions. The pieces are held together by plastic rivets. If any of this sounds familiar, you've probably played with Mattel's Kamigami toys. Two years ago the company released insect-like robots, and last year's collection was a series of dinosaurs you put together. Hot Wheels has borrowed that general idea... to mixed success.

The instructions walk you through the process, step by step, with a little animation to show how you should fold and put the rivets in. Missed something? You can replay the directions to your heart's content until you get it right. For the most part this works and is a vast improvement on Lego manuals. However, unlike Kamigami or Nintendo Labo, you can't rotate the image, which means that the locations of some rivets might be unclear and will require some double- and triple-checking to get right. However, if you do screw it up, the rivets are easily removable with the included wrench.

This is definitely not a toy for small children: The rivets are small, the folding requires a firm hand and the entire prospect requires quite a bit of patience. It didn't require as much as I originally anticipated though: Even though I had to stop several times to double-check my work, it still didn't take more than 20 minutes. The original Kamigami I assembled two years ago took an entire hour! But that was a more complex set, with legs I had to assemble and rivets that were a lot harder to remove. The Hot Wheels set is way simplified: There are only seven plastic parts on the sheets, plus the fender. The chassis and frame are only three pieces total. (And only 26 rivets are needed, for what it's worth.)

The basic construction means it's less likely to fall apart when I accidentally drive it off a table, get it stuck under a couch or... you get the idea. The worst that happened was that the frame popped off completely when it tumbled onto the ground, but all I needed to do was push it back on. The plastic pieces might have sustained a few scratches as well. One of the nice thing about a design like this is that you can, theoretically, replace the outer shell. 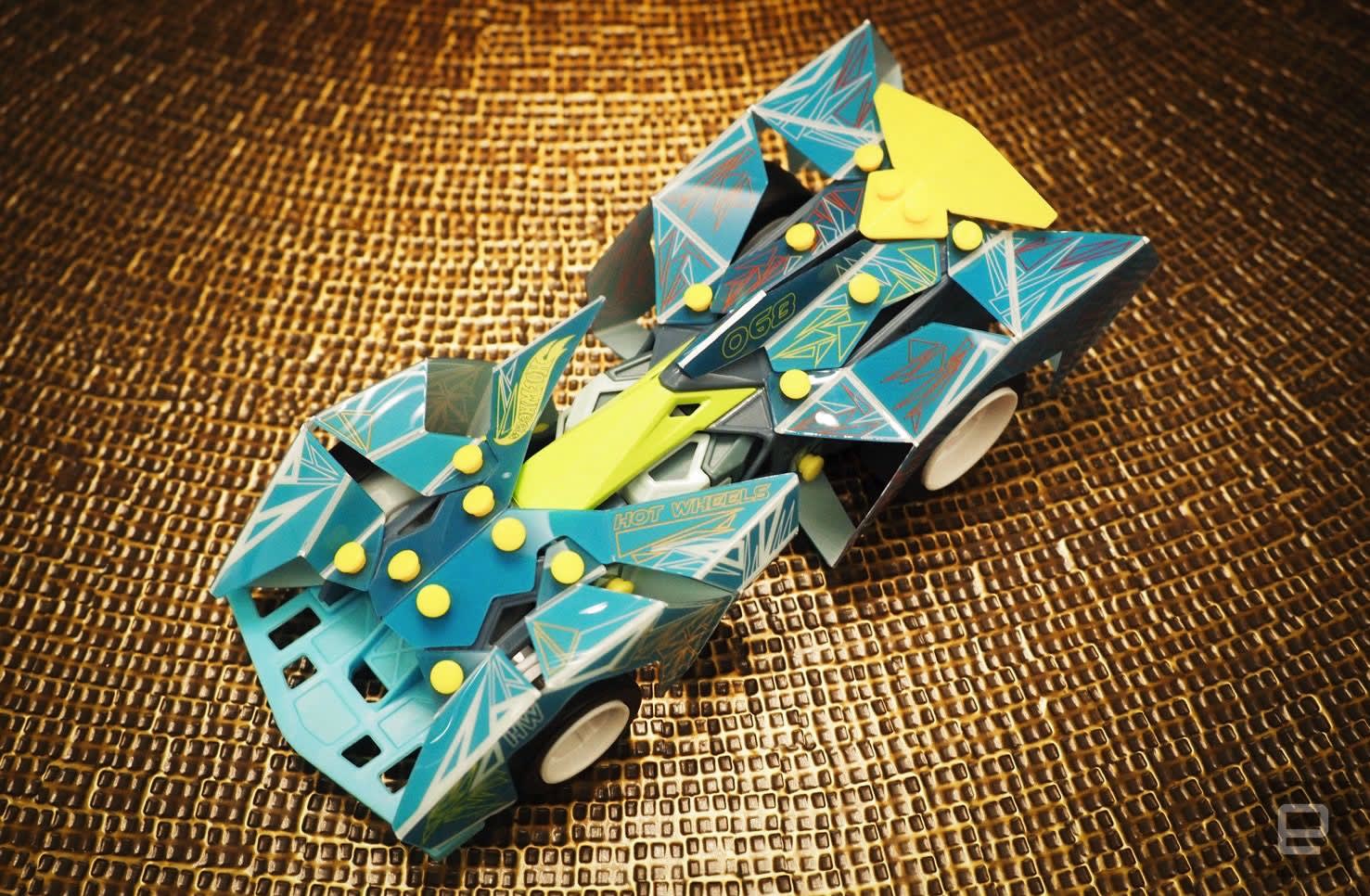 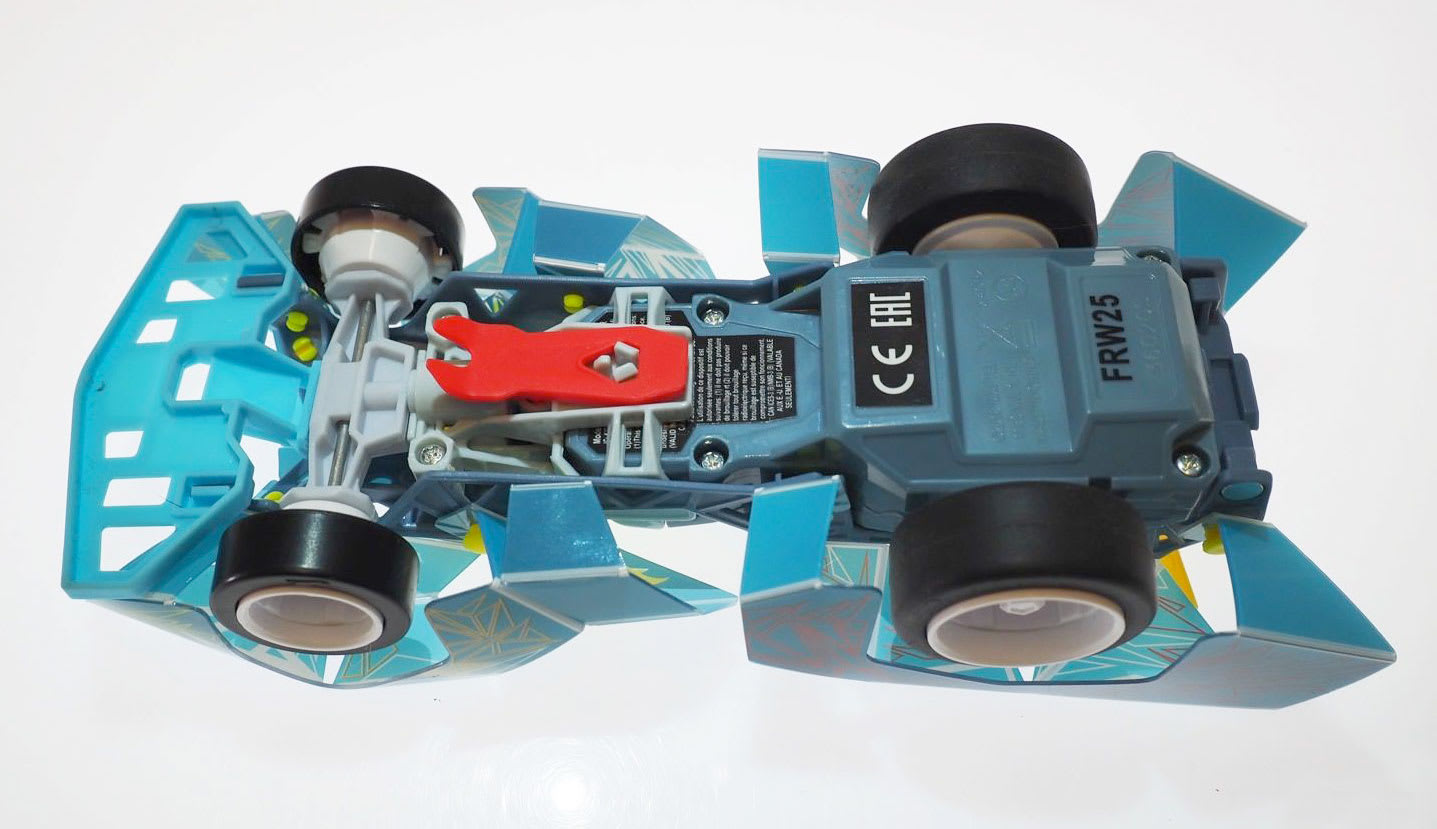 Once the whole thing is put together and charged up via the microUSB port in the rear, you can link it to the TechMods app. The connection was almost instant, a vast improvement over a lot of other Bluetooth-connected toys I've played with. The app itself has a limited number of modes and doesn't include any kind of coding features, so parents hoping for a stronger STEM component will be disappointed.

What you do have, of course, is a standard driving mode where you can zip the car around in the real world. I found it pretty fast, though like many RC vehicles it didn't handle rugs well and was better suited to a bare floor. There's also a "treasure hunt" mode where you drive around and wait for your phone to detect treasure. The app signals the car is getting close by changing a set of lights from red to yellow and then to green. The car doesn't have any way to track distance traveled, though, so it's really just waiting for you to drive a lot. I turned the car upside down and let it spin its wheels, and it still "found" treasure.

A little more interesting are the "car as controller" modes, which are pretty much described in the name. They're in-app games that ask you to point your TechMods car at the screen to steer. There's a standard track-racing game, one where you drive around an arena picking up and delivering items, and a survival game where you simply drive around until your car takes too much damage. It takes a little time to master: It's easy to understeer or oversteer, so you need to find the right point in the middle. It's best with two hands, especially if your paws are on the smaller side, so you'll need to prop up your phone or tablet somewhere. It's odd that the TechMods vehicle has some kind of motion sensors for this mode but that they weren't used in the treasure hunt game to detect that I was cheating.

Because TechMods skews a bit older than the standard Hot Wheels product -- ages eight to 16 -- Hot Wheels is releasing it via Indiegogo first, with the pre-order page going live today and shipments going out in June. It'll cost $50 for backers. The idea is to get feedback from a more tech-savvy audience before releasing it in stores or expanding the line. That hopefully is something that will happen: There's a lot of potential here, and it's a promising step up for kids who are ready to move on from little die-cast vehicles.