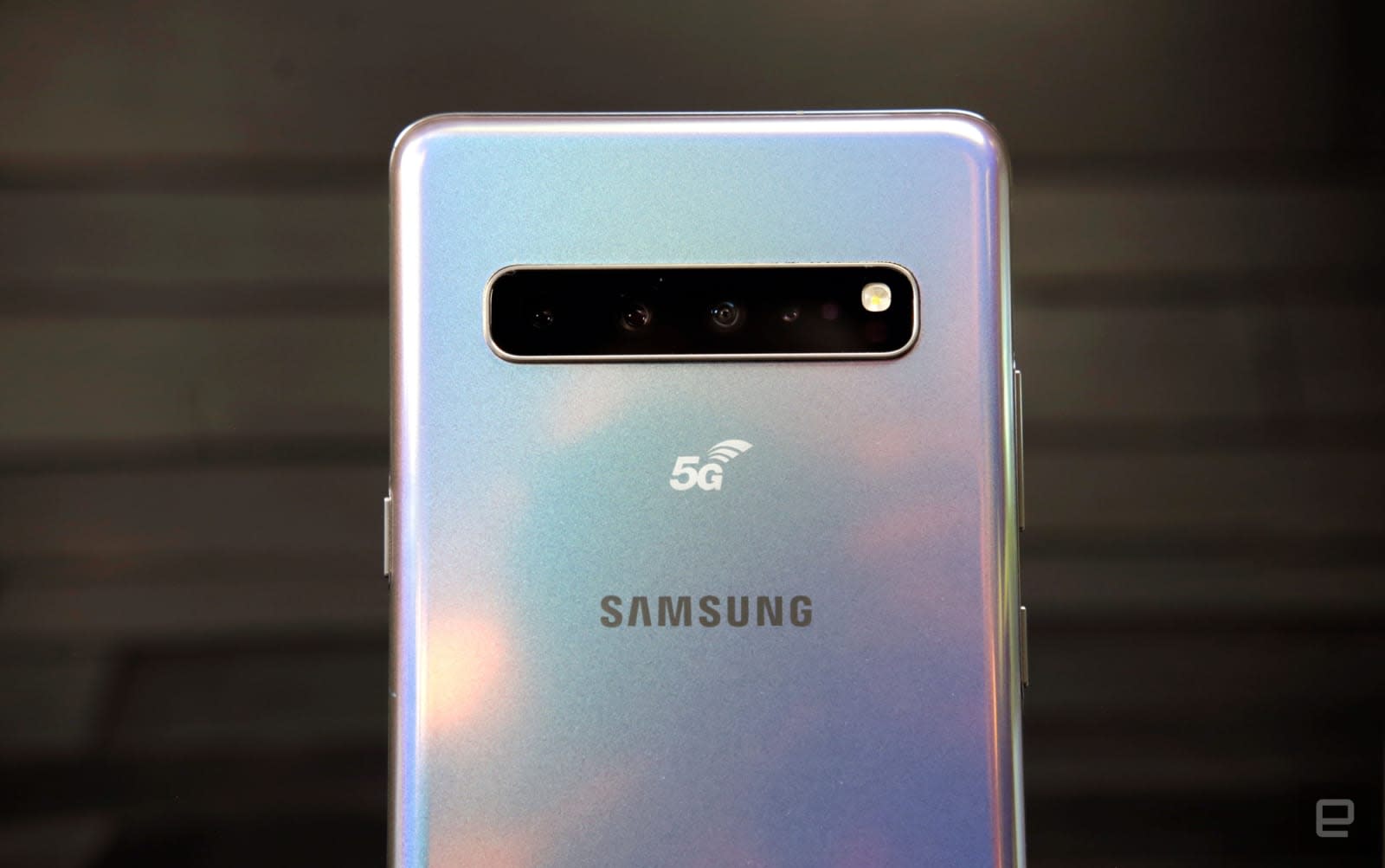 Samsung has revealed its first flagship 5G phone as part of its Galaxy S10 lineup and it turns out a November report about the device was pretty accurate. With a 6.7-inch, 505ppi AMOLED Infinity-O display, it's the largest of the Galaxy S10 lineup. It measures 77.1 x 162.6 x 7.94 mm, so it's a little taller, thicker and wider than the three other models. The S10 5G weighs 198 grams -- 23g more than the standard S10+, but the same as that device's ceramic variant.

It includes a quartet of rear cameras. It has the same telephoto, wide-angle and ultra wide lenses as the S10 and S10+, as well as one for 3D depth sensing. You'll be able to add background blur to your videos in real-time with all those lenses. On the other side, there's a front-facing camera, along with a 3D depth sensing lens. The S10 5G has 8 GB of RAM and an eight-core processor, while a fingerprint scanner is built into the display.

The battery has a larger capacity than the other S10s too -- 4,500mAh compared with 4,100mAh in the S10+ and the S10's 3,400mAh. The handset also supports super-fast, 25W charging, and lets you wirelessly charge a second device by placing it against the phone. Like its siblings, the S10 5G supports WiFi 6.

On the downside, there's a single SIM slot in the Galaxy S10 5G and no microSD card support. That means you'll have to make do with 256 GB of storage, the only available option for the handset.

Most importantly, there's that 5G connectivity. Samsung says you'll be able to use it to download an entire season of a TV show in minutes and take part in 4K video calls. Depending on where you live, though, you might have to wait a little while before you can truly take advantage of 5G -- carriers are still building out their networks. The Galaxy S10 5G will initially be exclusive to Verizon, which will be the only carrier to offer the phone in a Titan Gray finish. The device should be available on AT&T, Spectrum Mobile, Sprint, T-Mobile and Xfinity Mobile later in the summer, though there's no word on pricing as yet.

Having a 5G phone right now might be more about making sure you're ready for a faster future. Still, Samsung is one of the first major phone-makers to reveal a 5G handset, so the Galaxy S10 5G is a big deal. Stay tuned to Engadget for more about the device, including a review.

In this article: 5g, att, galaxy s10, galaxy s10 5g, gear, mobile, s10event, samsung, samsung unpacked, samsung unpacked 2019, sprint, t-mobile, unpacked, unpacked 2019, verizon
All products recommended by Engadget are selected by our editorial team, independent of our parent company. Some of our stories include affiliate links. If you buy something through one of these links, we may earn an affiliate commission.