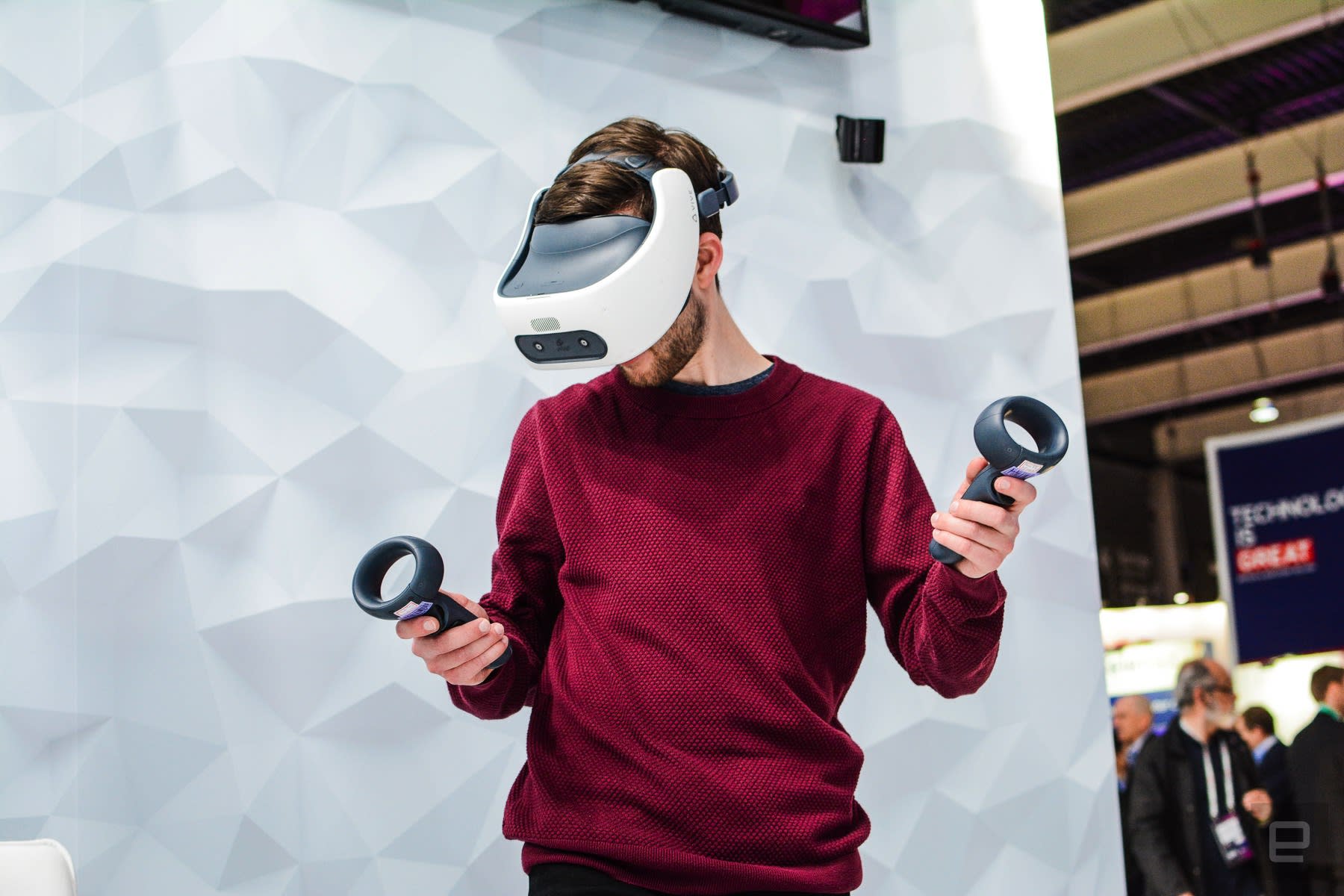 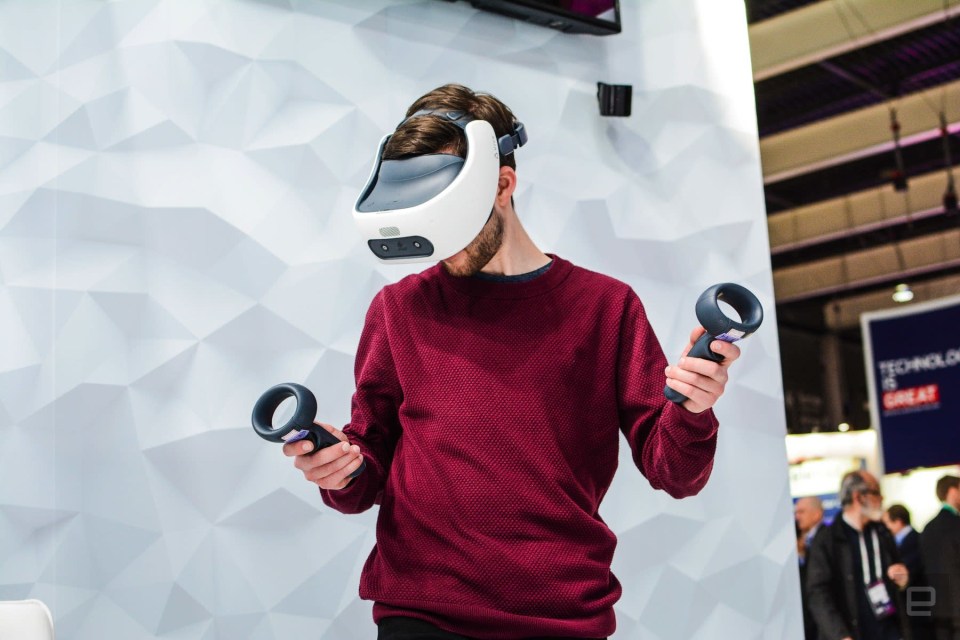 Oculus Quest is coming. The all-in-one VR headset, which is due this spring for $399, represents a major threat to HTC and its expanding Vive business. So how is the company responding? With a new headset bundle, of course. At Mobile World Congress in Barcelona, I was able to try a brief demo with the newly-announced Vive Focus Plus. The headset is near-identical to the Vive Focus that came out in 2017, however the controllers are much improved and promise similar immersion to the Vive Pro.

So what's changed? Well, the new remotes support six degrees of freedom (6DoF). That means they'll track your hands as you move and rotate along three different axis: up and down, left and right, and forwards and backwards. The original Vive Focus, for comparison, shipped with a single remote that only allowed three degrees of freedom (3DoF). Like Google Daydream, Oculus Go and other low-cost headsets, the controller was functional but restricted the types of experiences you could engage with. 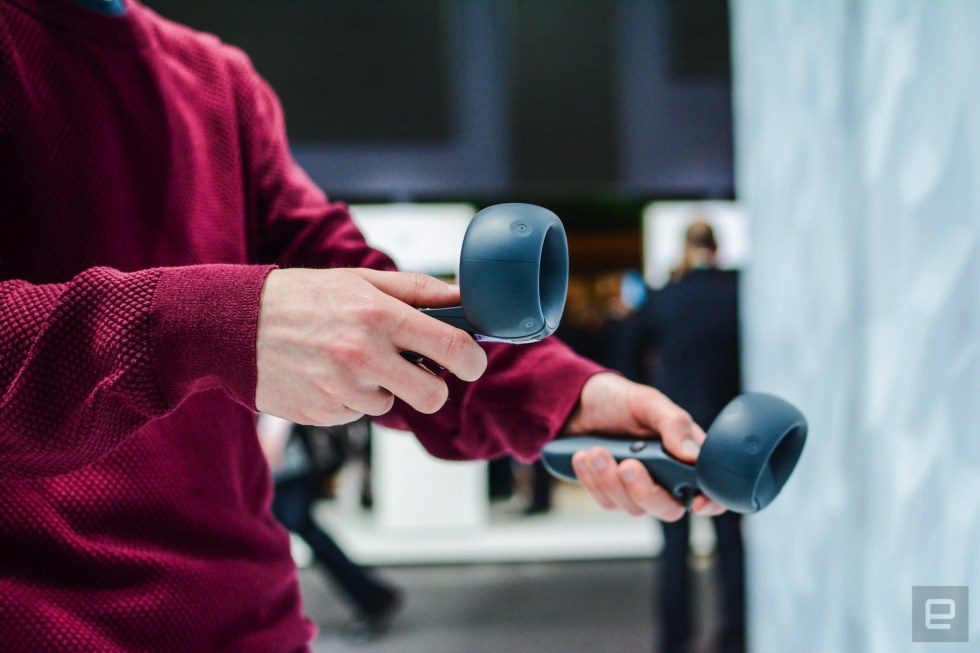 The new accessories have a giant trackpad, two face buttons and two pressure-sensitive triggers. If you've used the Vive or Sony's wand-style PlayStation VR controllers before, you'll feel right at home. During a 30-minute demo, I used the new hardware to complete a basic procedure in a SimforHealth medical app. To be clear, this wasn't a classic video game like the utterly hilarious Surgeon Simulator. The software is meant for nurses and other healthcare professionals who want to learn new techniques in a safe, guided space. That meant I had to concentrate and answer periodic quizzes that were, unsurprisingly, well beyond my understanding.

For the most part, the controllers worked fine. I carefully washed my hands, pulled on a pair of gloves and removed my (surprisingly calm and uncomplaining) patient's bandages. Later, I prepared two syringes and administered some suitable doses. None of these actions would have been possible -- at least, not with the same level of accuracy -- with the original Vive Focus remote. The simulator did, however, occasionally miss and misread some of my button presses. I'm blaming this on the software, though, rather than the underlying hardware after SimforHealth admitted it was still in the process of porting the app from the PC-powered Vive.

The experience wasn't perfect but it highlighted the market that HTC is leaning toward: enterprise customers. Like Microsoft and its mixed reality HoloLens 2 headset, the company believes that businesses -- hospitals, schools, architecture firms and the like -- will benefit the most from an all-in-one solution. In a packed classroom, for instance, it's easier to hand out self-contained headsets than hook everyone up to a powerful gaming PC with external 'lighthouse' sensors. Still, that doesn't mean the Vive Focus Plus can't succeed as a consumer product. It just needs more content -- preferably exclusives -- and a sticker price that isn't astronomical.

HTC is tackling the first problem with a developer initiative called Vive Wave. The company calls it a "unified platform" for people who want to port their PC-powered applications and support a wide range of mobile VR headsets. The second challenge -- price -- could be trickier. We don't know how much the Vive Focus Plus will cost but for reference the original Vive Focus costs $599. As such, I seriously doubt the headset will be cheaper than the Oculus Quest when it launches in the second quarter of 2019.

In this article: gadgetry, gadgets, gear, htc, HTC Vive, HTC Vive Focus, HTC Vive Focus Plus, mwc2019, Virtual Reality, Virtual Reality Headset, VR
All products recommended by Engadget are selected by our editorial team, independent of our parent company. Some of our stories include affiliate links. If you buy something through one of these links, we may earn an affiliate commission.