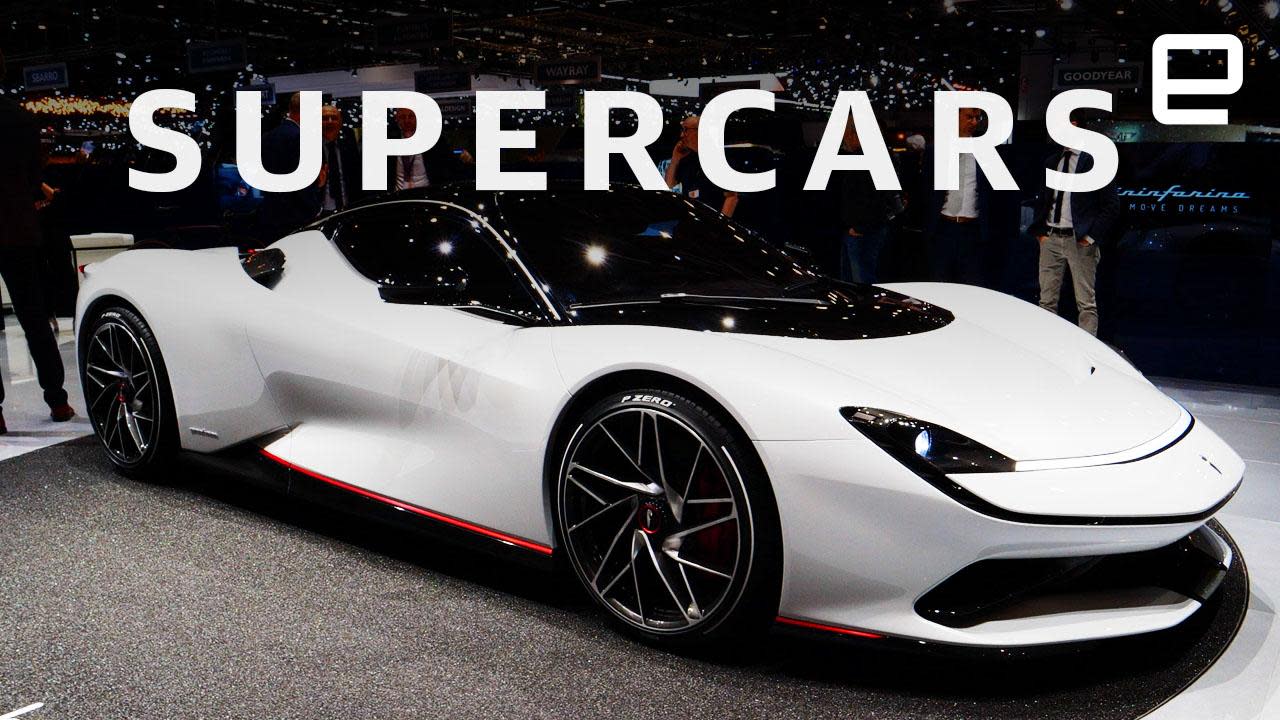 Most of us will never have the cash for a supercar, but we still want them to look cooler and go faster every year. At the 2019 Geneva Motor Show, automakers were happy to accommodate, with a fresh crop of electric and gas-powered super- and hypercars. Models from Ferrari, Lamborghini, Pininfarina, Koenigsegg and Aston Martin tick all of our boxes: Ever more wild and futuristic looks, insane speeds and higher prices than a nice house. 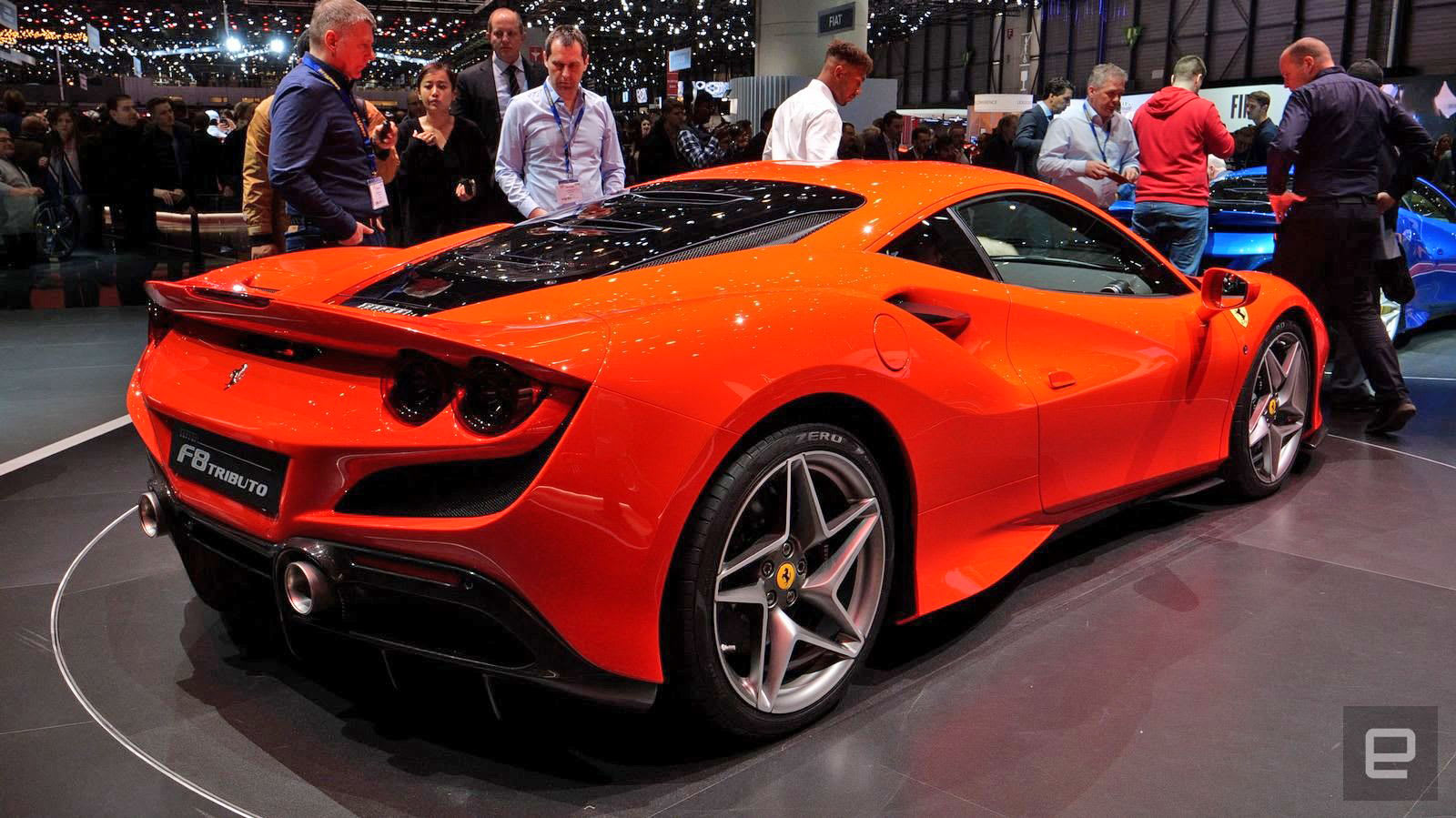 With 720 horsepower and 568 pound feet of torque, the F8 Tributo has Ferrari's most powerful V8 engine ever. This propels the Tributo to speeds up to 211 MPH and has a 0-60 mph time under 2.9 seconds -- not bad acceleration for a non-EV. Ferrari calls the styling "a bridge to a new design language," with quad taillights, new air ducts and a dished hood that adds 20 percent more downforce. And as usual, there's a clear Lexan cover that lets you ogle that beautiful engine. Ferrari has yet to announce the price, but the F8 Tributo will arrive early next year. 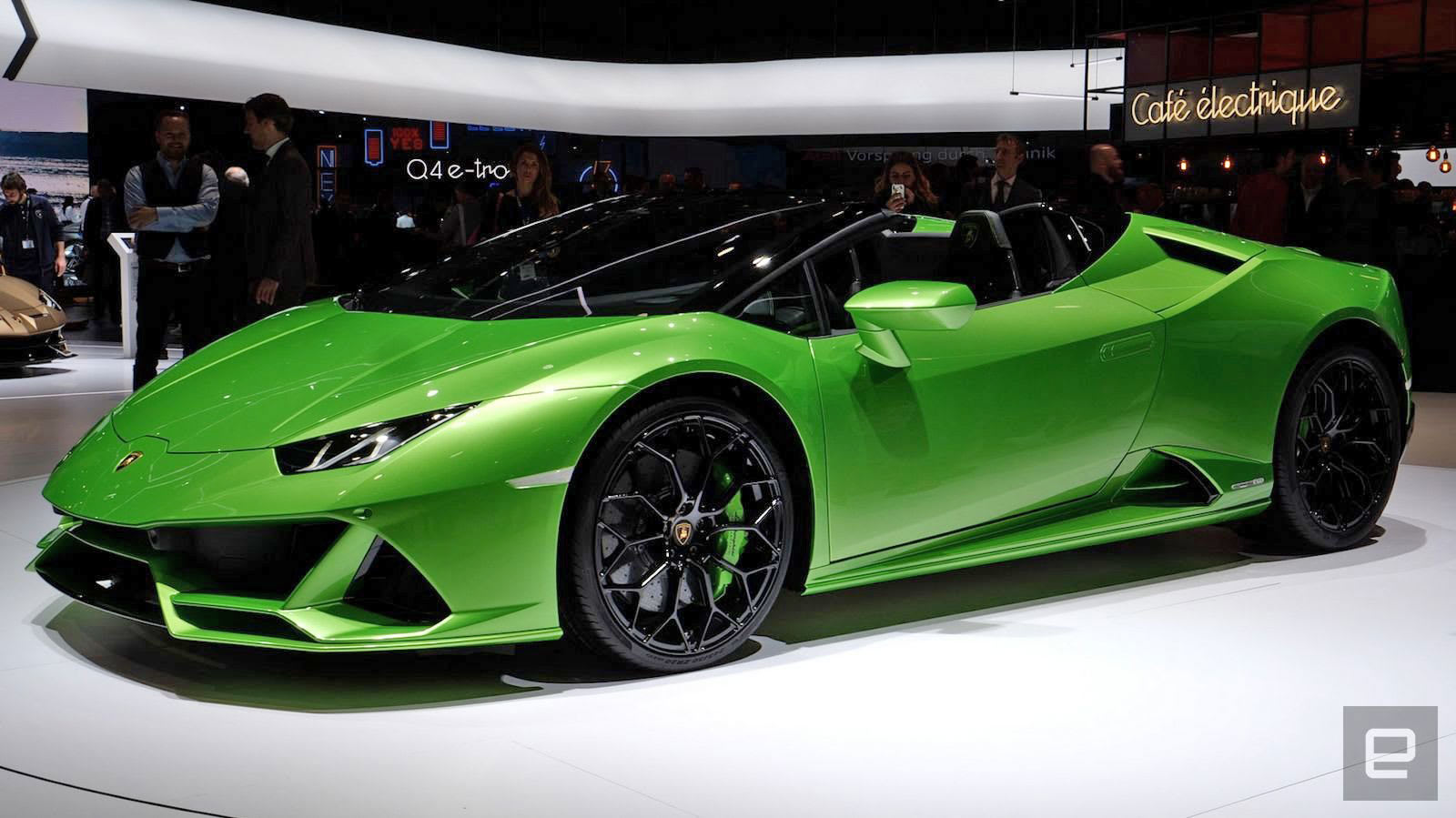 Lamborghini's convertible Huracan Evo Spyder is the mildest car in this roundup, and that's saying something. It packs a 5.2-liter V10 engine with 640 horsepower and 442 pound-feet of torque, enough to launch it from 0 to 60 mph in 3.1 seconds and hit 202 MPH -- nearly on par with the hard top EVO. That kind of raw power can be difficult to handle, so it also comes with very advanced traction and stability control software. That way, if you can scrape together $287,400, it should keep you out of the ditch until you master all that power. 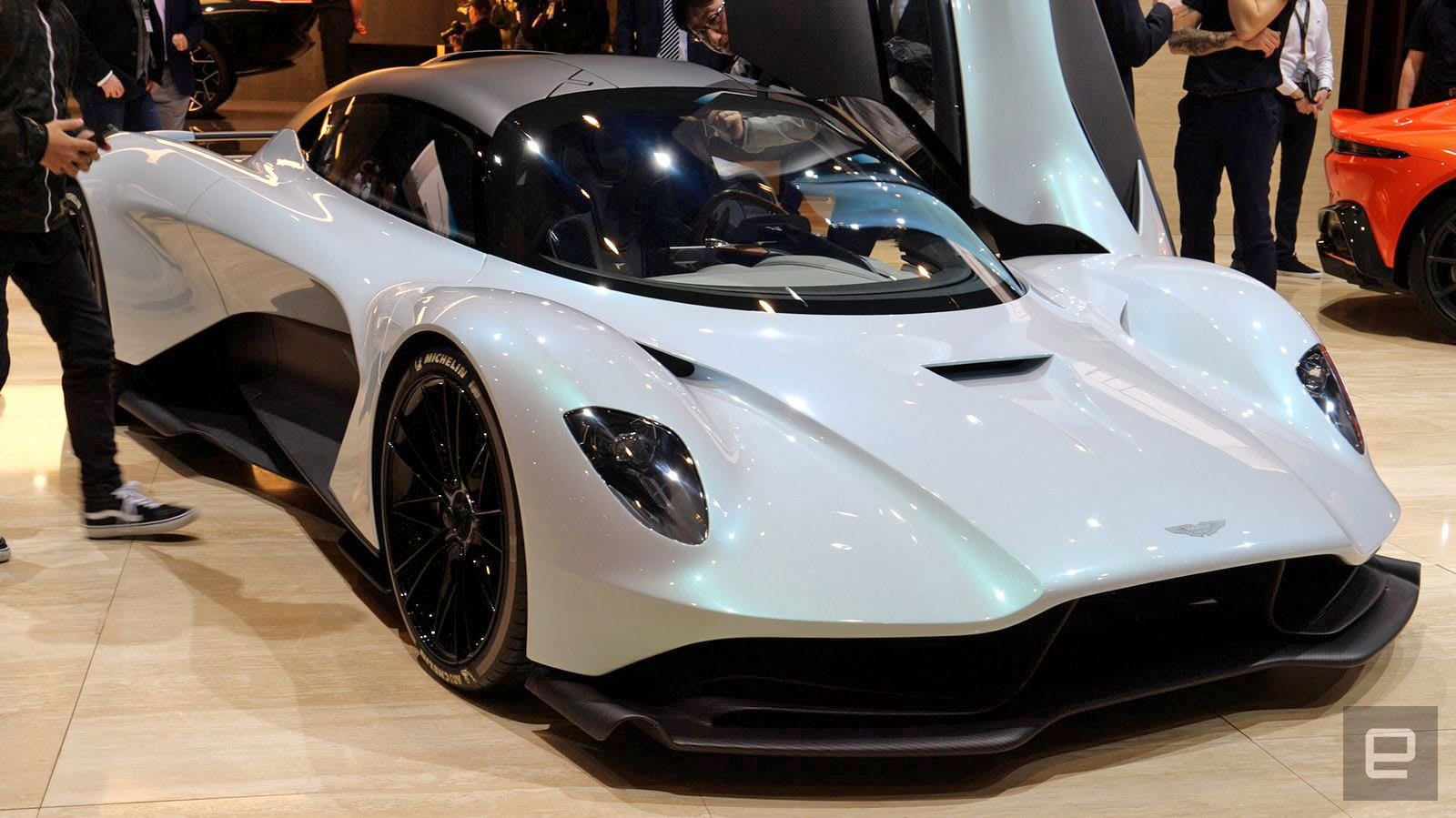 When dropping over one million dollars on a car, you might expect some kind of dashboard display. However, Aston Martin's AM-RB 003 hypercar was not made to coddle, so you'll need to bring your own device. What you will get is power. It'll pack an unspecified twin-turbocharged engine that will likely produce around 1,000 horsepower, more than keeping up with rivals. The "FlexFoil" morphing wing will also keep it on the road at speeds likely well in excess of 200 MPH. It arrives in 2022.

Pininfarina is best known as a design studio, but this year it launched a debut car of its own, the Battista. It's an elegant, less macho hypercar than others in this roundup and evocative of Pininfarina's many designs for Ferrari and others. The headline feature, however, is the 1,900 horsepower motor that matches the Rimac Concept Two, and propels it to over 217 MPH and 0 to 62 MPH in under 2 seconds. Only 150 will be built (exactly like the Concept Two) so you can expect an equally exclusive price tag. 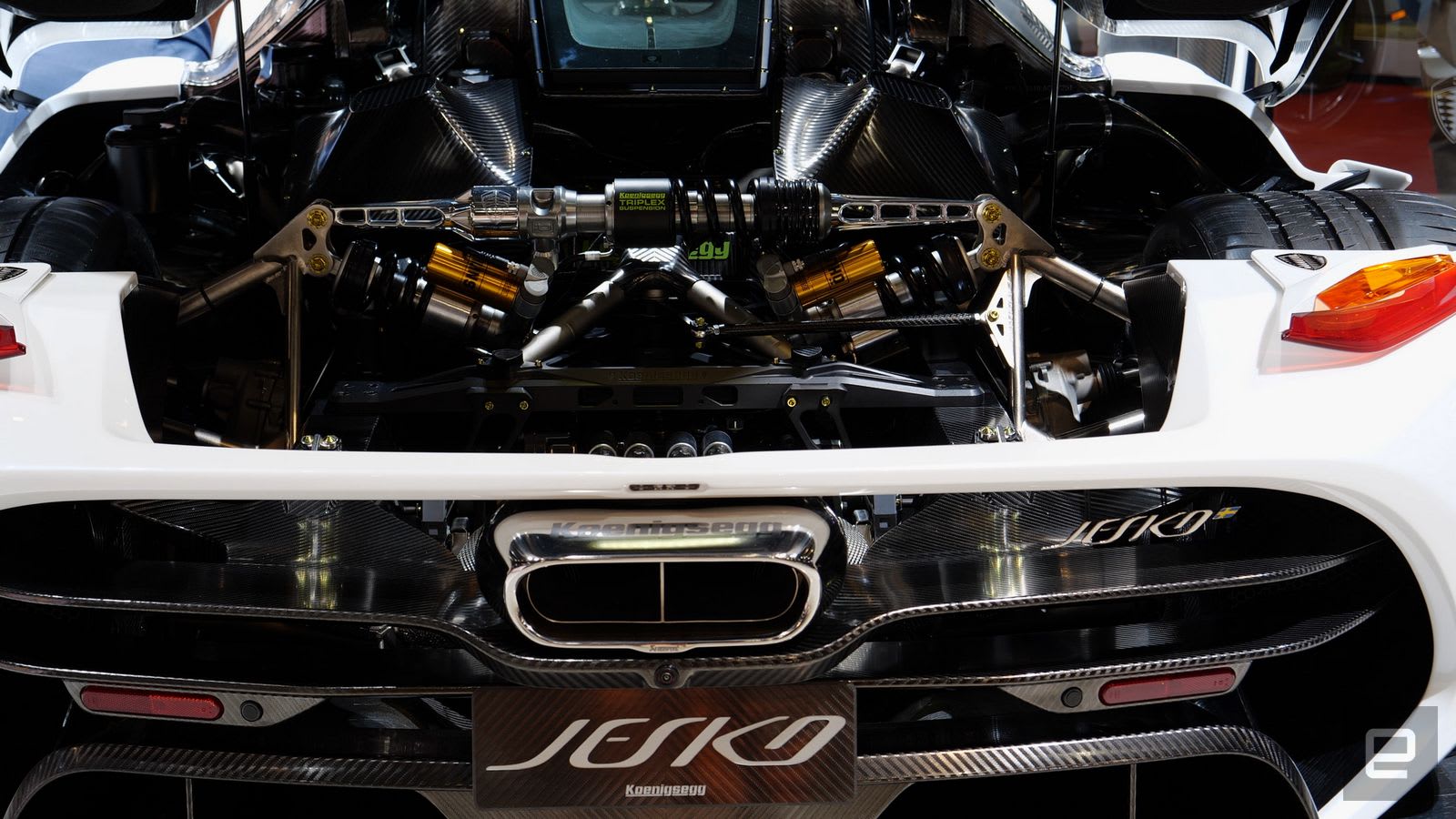 The Koenigsegg Jesko is the polar opposite of the Battista, powered by gasoline instead of electrons and with a hyper-aggressive, race-track design. The end result is the same, though: speed. With a 5.0-liter turbocharged V8 and nine-speed, seven-clutch transmission, the Jesko can produce 1,600 horsepower motor using E85 fuel, or a mere 1,280 horsepower with regular gas. The company claims the Jesko can hit 300 MPH (not a typo), a reasonable claim consider its last car, the Agara RS, went 278 MPH on a Nevada highway. The price for all this performance? Just $2.8 million -- so you'd better get going on that startup.

In this article: AstonMartinAM-RB003, FerrariTributo, gear, Geneva Motor Show 2019, koenigseggregera, LamborghiniHuracanEvoSpyder, pininfararinabattista, supercars, transportation
All products recommended by Engadget are selected by our editorial team, independent of our parent company. Some of our stories include affiliate links. If you buy something through one of these links, we may earn an affiliate commission.