'Back in the Groove' falls flat real quick.

When I was young -- and I mean young, around six or seven -- my extended family would get together at my grandmother's house nearly every Sunday. And often on those days, for at least an hour or two, my cousin and I would play on her Sega Mega Drive (aka Genesis) together. Our go-to game was ToeJam & Earl, I think mostly because we needn't fight over one controller and it was co-operative, rather than competitive. Though my memories of the game are fond, the sequels released over the following decade completely passed me by. That's why I've had my eye on ToeJam and Earl: Back in the Groove -- an homage to the '90s classic that secured initial funding on Kickstarter in 2015. As it turns out, though, some memories are better being just that.

Prior to playing Back in the Groove, I actively avoided doing any sort of research. I'd read about the general thrust of the reboot a few years earlier, and I didn't want to set any expectations by revisiting the original. I'm glad I did, because when I booted it up on my Switch for the first time, the hit of nostalgia was like taking a double-dose of happy pills. The outrageous colors and over-the-top funk soundtrack of just the menu screen immediately took me back to the early '90s. I felt like I was kneeling in front of a tiny CRT again.

"This game's... bizarre," a friend commented. And he's right, it's plain silly. In the opening cutscene, our protagonists, wannabe alien rap duo ToeJam and Earl, are taking their boombox-cum-spaceship to Earth. Their plan to impress a pair of female aliens goes awry, however, when Earl presses the wrong button and creates a black hole that tears the craft apart. In order to rebuild it, you must wander the game's levels recovering parts while avoiding troublesome earthlings and engaging with helpful ones. And they are literally levels -- you progress through them by ascending in an elevator, and can drop back to a previous stage if you fall off the edge.

It was exactly how I had pictured it, and I took great pleasure exploring the early levels as funky, bass-guitar heavy rhythms hummed away in the background. I smiled when I encountered Gandhi for the first time, who will protect you from the game's enemies if you stay close to him. Ah yes, the hula girls! I thought, as ToeJam encountered one and couldn't help but start dancing. I dipped into the line-running and rhythm minigames, snuck up on Santa, and was flattened by an overweight, Segway-riding mall cop I wasn't sure was friend or foe at first. I searched for hidden paths that reveal themselves when you get close, I picked up every present (the game's version of power-ups) and shook every bush hoping to find money. And within half an hour, I was bored out of my mind. 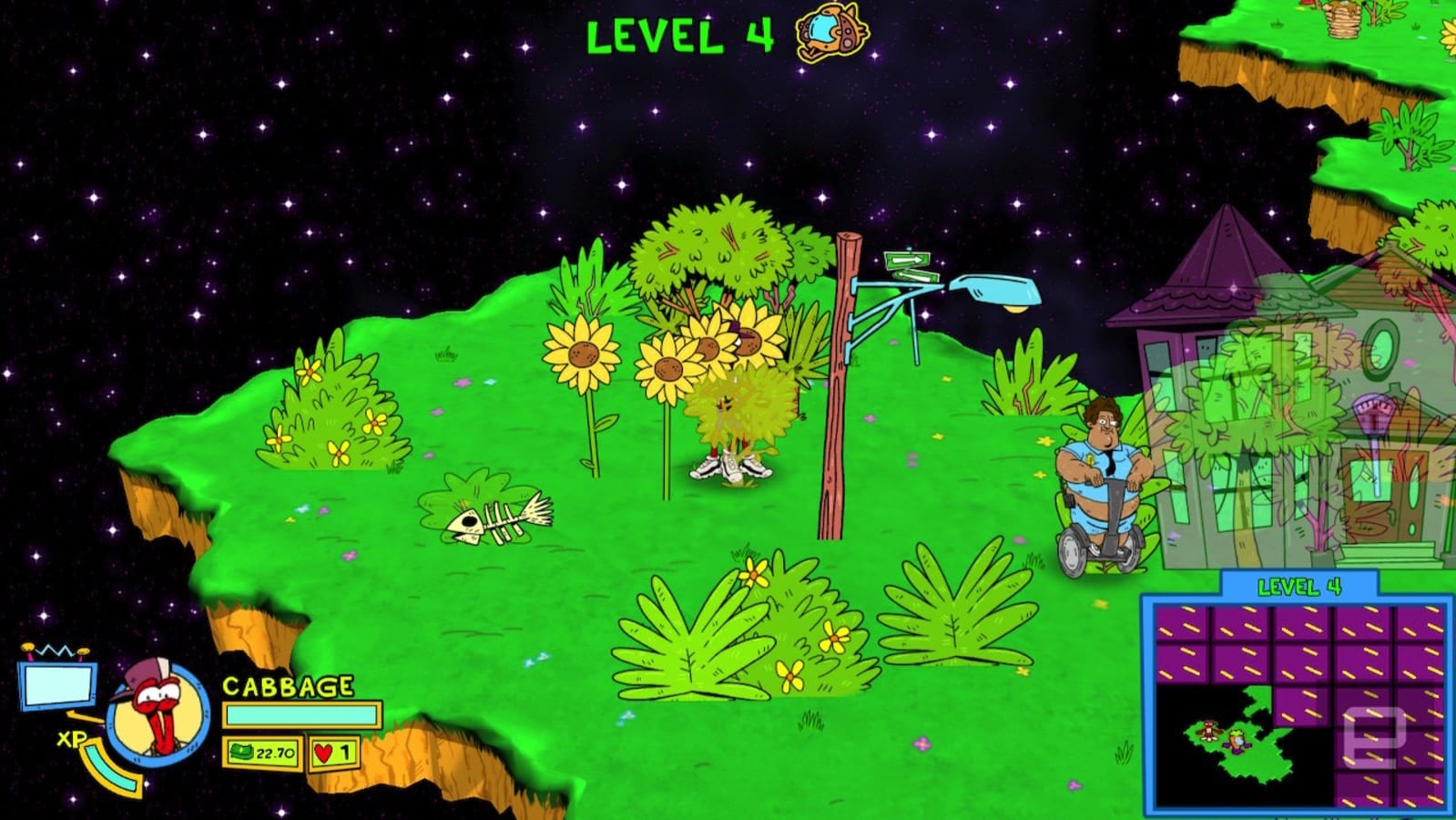 That's roughly how long it took me to encounter most of what the game has to offer. Like an ice-cold Diet Coke, the combination of nostalgia, casual gameplay and catchy soundtrack was refreshing at first, but soon grew lukewarm and unpalatable. Usually, I like to explore every nook and cranny of a game, find every item and complete all side quests. Back in the Groove seems, on paper, to be exactly my jam. The whole game is a constant stream of micro-rewards. The minimap of each level is only revealed as you explore. You can search your immediate area with the push of a button, uncovering trees and bushes that are hiding something, good or bad. You collect money, presents, experience points, spaceship parts. But none of it adds up to anything meaningful.

In fact, you could probably complete an entire playthrough by ambling around. Almost everything you do in the game earns you experience, and when you have enough, you go to a man dressed as a carrot (there's one on every stage) to level up. This improves stats like your walking speed, search radius, present-carrying capacity and more, but it just feels like something to do. As you roam the levels, you're forever picking up presents, and you only find out what's inside each type after you open it. Perhaps it's a pair of rocket skates or spring shoes that allow you to explore the level faster, but one wrong input and you can easily fall off the edge to the level below. Or maybe it contains tomatoes you can throw at enemies to vanquish them, though it's easier to simply walk around them. 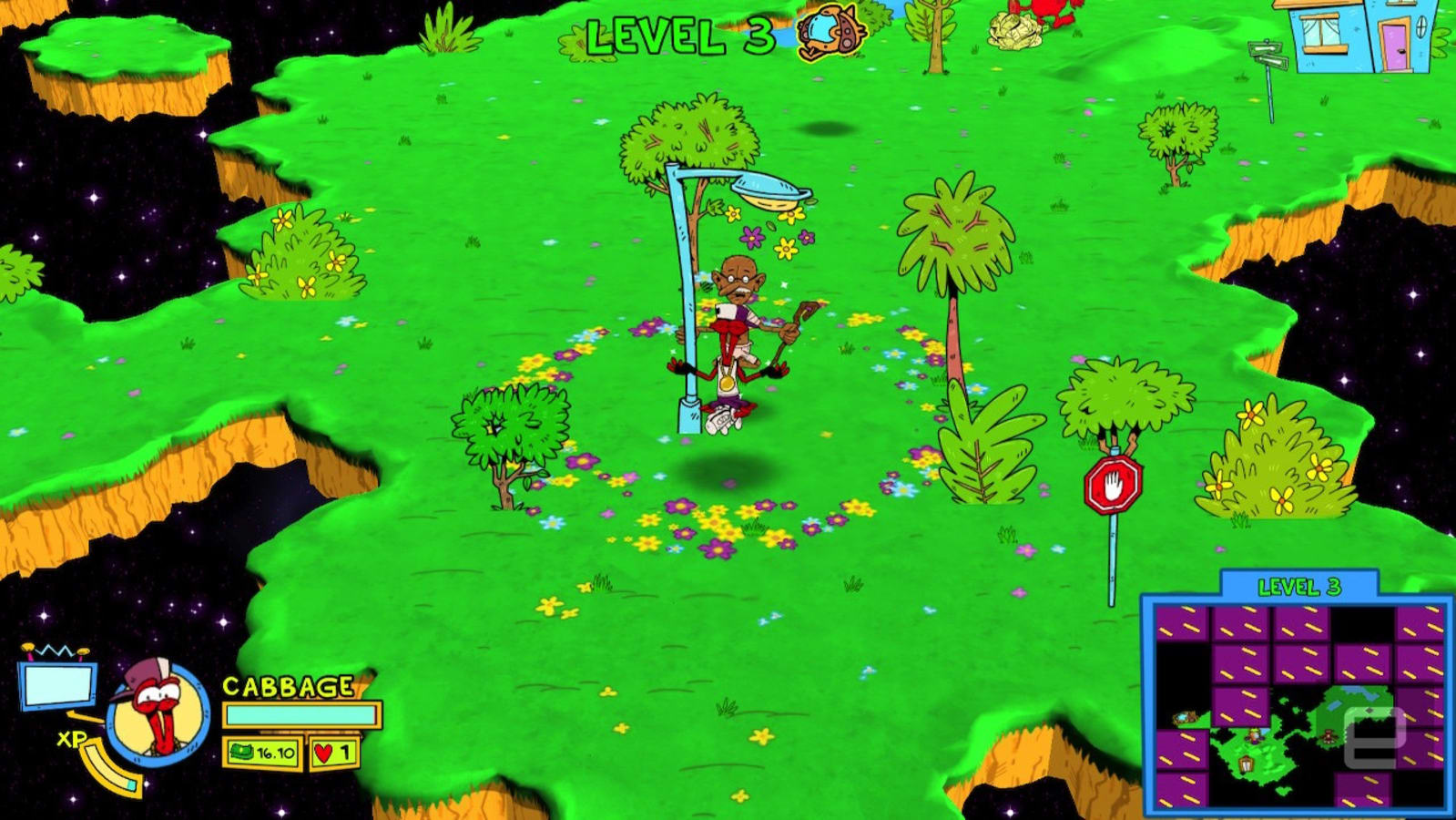 Gandhi's got your back

The money you collect along the way will pay for the services of friendly earthlings. They might fix broken presents that have a chance of exploding, or reveal what's inside one before you open it. I don't know why you'd bother, though. There's no real need to use presents as it is -- sometimes a poorly timed pair of rocket skates can be a hindrance, not a help -- so you might as well just open them at random and see what happens. The only really good present is the one that warps you straight to spaceship pieces, saving you time that is otherwise very much wasted.

I think I've got my point across by now: Back in the Groove gets tedious real quick. The game's idea of difficulty is to just put more crap on the screen as you ascend through the levels. Don't get me wrong, running into the Segway mall cop, the drone pilot, the alien fanatic, the evil elevator or the MIB agent for the first time injects a little bit of character into the game. But when you're on the last level and you can barely see for enemies -- and at this point, all you wanna do is get to that final elevator and turn the thing off -- there's nothing interesting about them. Plenty of enemies nudge you on contact, sometimes off the level and down to the previous stage. You have to walk to the elevator, wait for the loading screen and try again. I can't think of a more frustrating mechanic. 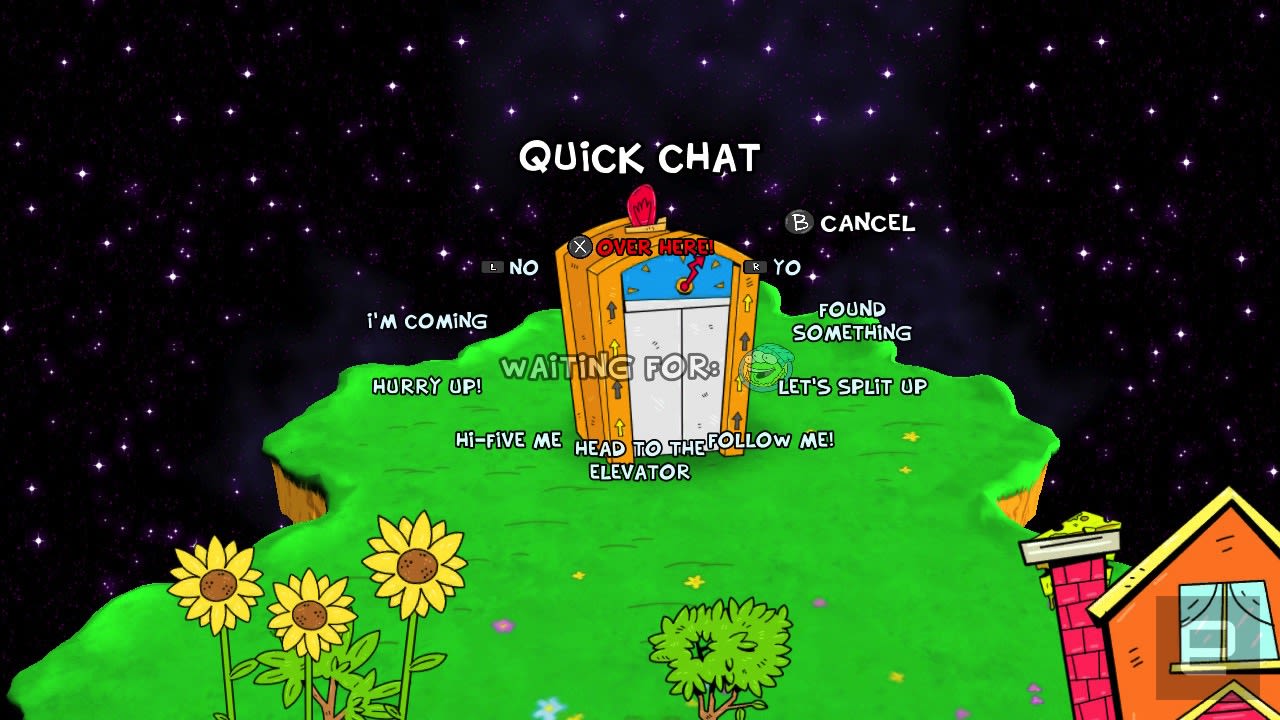 Multiplayer in a nutshell

On the surface, there's plenty of content in the game. There are several playable and unlockable characters, a fixed-world mode you can learn and revisit, a procedurally generated option that changes the layout every time, and local and online multiplayer. I was keen on recapturing the old days with some co-op questing, but it's even worse than playing alone. The game is just as one-dimensional, you can only communicate through a handful of canned text prompts, and more often that not one of you is waiting in the elevator for the other player, who's milling around shaking trees looking for meaningless presents.

At a push, and I'm talking in an extreme moment of idleness, I might play a local game with a friend for the sake of doing something different. And the game is different. I can't think of a casual, weird game that remotely resembles Back in the Groove. But it's so shallow and immediately repetitive that I think we'd end up switching to Mario Party or Super Smash Bros. five minutes later. 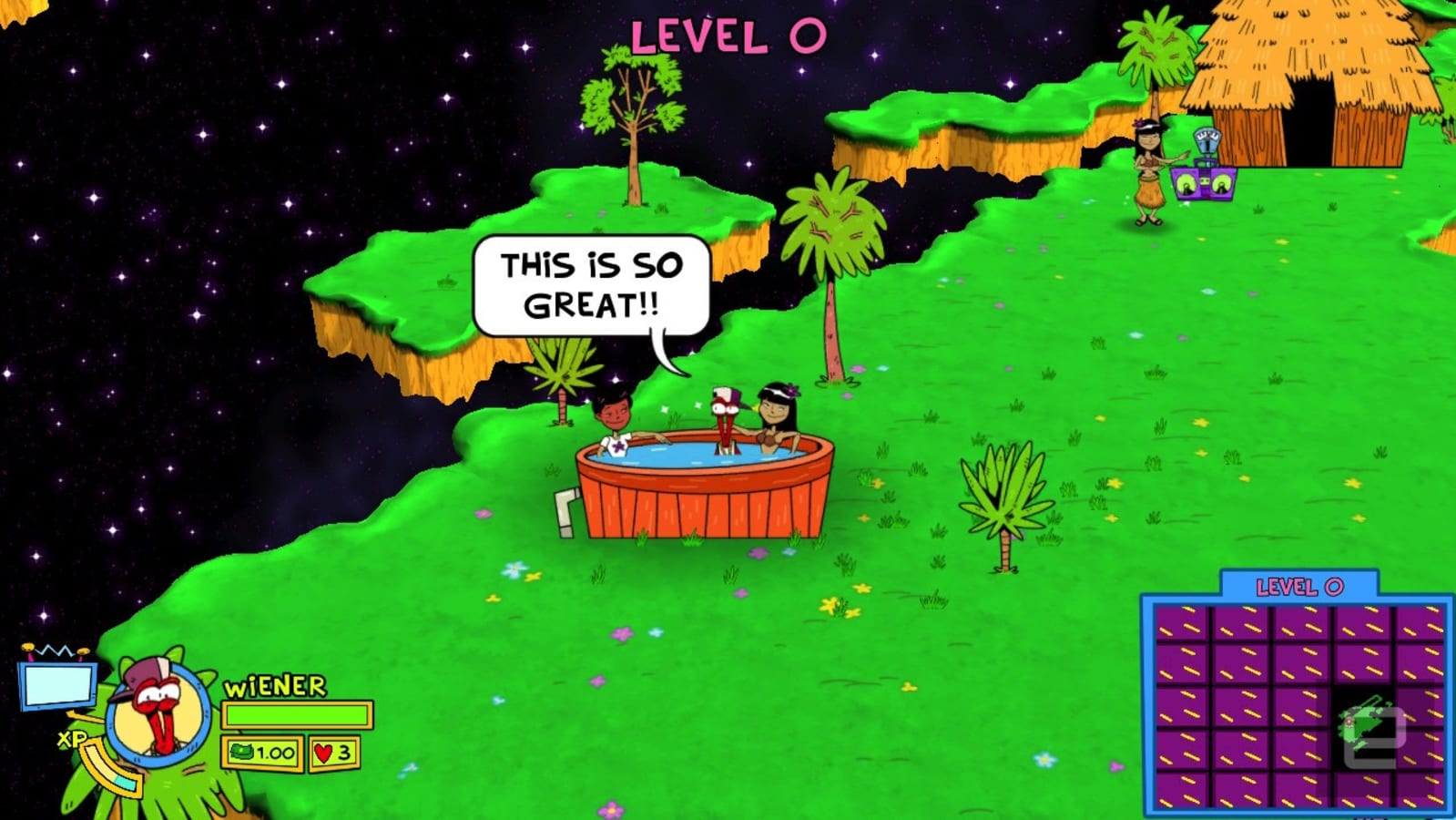 The one thing I truly appreciate about Back in the Groove is that it preserved the secret "Level 0" from the original game. There's a hidden area on the first stage you can fall through to get to it, and just as I remember, there's a lemonade stand to hang out at and a hot tub to chill in. Come to think of it, I seem to remember my cousin and I spending an inordinate amount of time there, role-playing as ToeJam and Earl. Perhaps it wasn't the game I remember so fondly as much as it was just having fun, being a kid.

I really wanted to like ToeJam and Earl: Back in the Groove. I've played so much Apex Legends recently, I was looking forward to something more chilled and retro. But nostalgia can't replace a real challenge. Many mechanics are utterly superfluous, and for an adult at least, it's just dull. ToeJam and Earl may still be up to their old antics, but as is the risk with reboots, they certainly haven't gotten better with age.

All products recommended by Engadget are selected by our editorial team, independent of our parent company. Some of our stories include affiliate links. If you buy something through one of these links, we may earn an affiliate commission. All prices are correct at the time of publishing.
View All Comments
‘ToeJam & Earl’ is more Diet Coke than fine wine