AT&T has the 'fastest wireless network' in the US

Third-party findings put the carrier ahead of the competition.

Just two days after AT&T declared itself the first 5G carrier in the US to reach gigabit speeds, the company has released a statement claiming it's the fastest wireless network in the nation. The findings come from third party network-testing company Ookla, which cited AT&T's top average US download speed at 40.7Mbps. 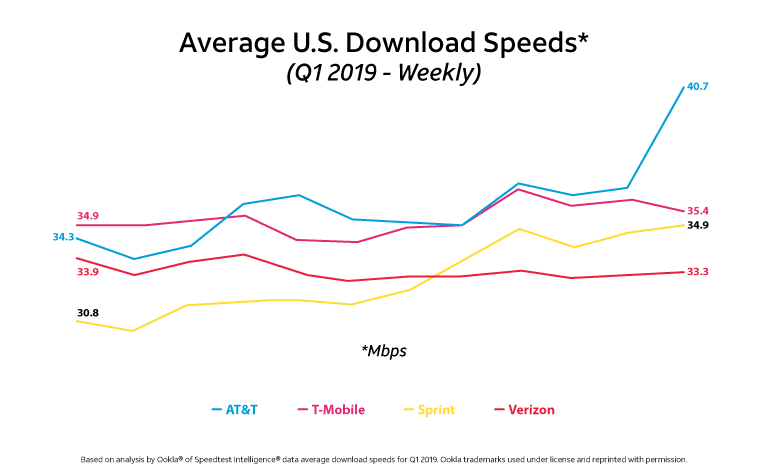 Ookla says that AT&T's speeds improved by more than 15 percent over the first three months of 2019, while other carriers' plateaued. However, AT&T attributes much of this success to its expansion of its 5G Evolution service, which it says is now twice as fast as its LTE service on average. This has caused controversy of late, with some claiming the label '5G' is misleading. AT&T's "real", standards-based 5G network, meanwhile, is still limited, and therefore few are in a position to take advantage of this speed as it's only available in certain areas in a number of cities. And, of course, hardware is yet to catch up with network potential.

Nonetheless, the results suggest that AT&T is on track to lead the way with 5G -- when it eventually goes mainstream, that is. The company plans to combine its 5G and LTE services into a single connection later in the year. If you've got the right gear and are in the right place, you can expect impressive speeds. If not -- as is the case for most – you'll just have to wait until 5G gains more traction.

Update 04/04/19 05:20AM ET: This post has been updated to better reflect the difference between AT&T's 5G Evolution service and its standards-based 5G network.