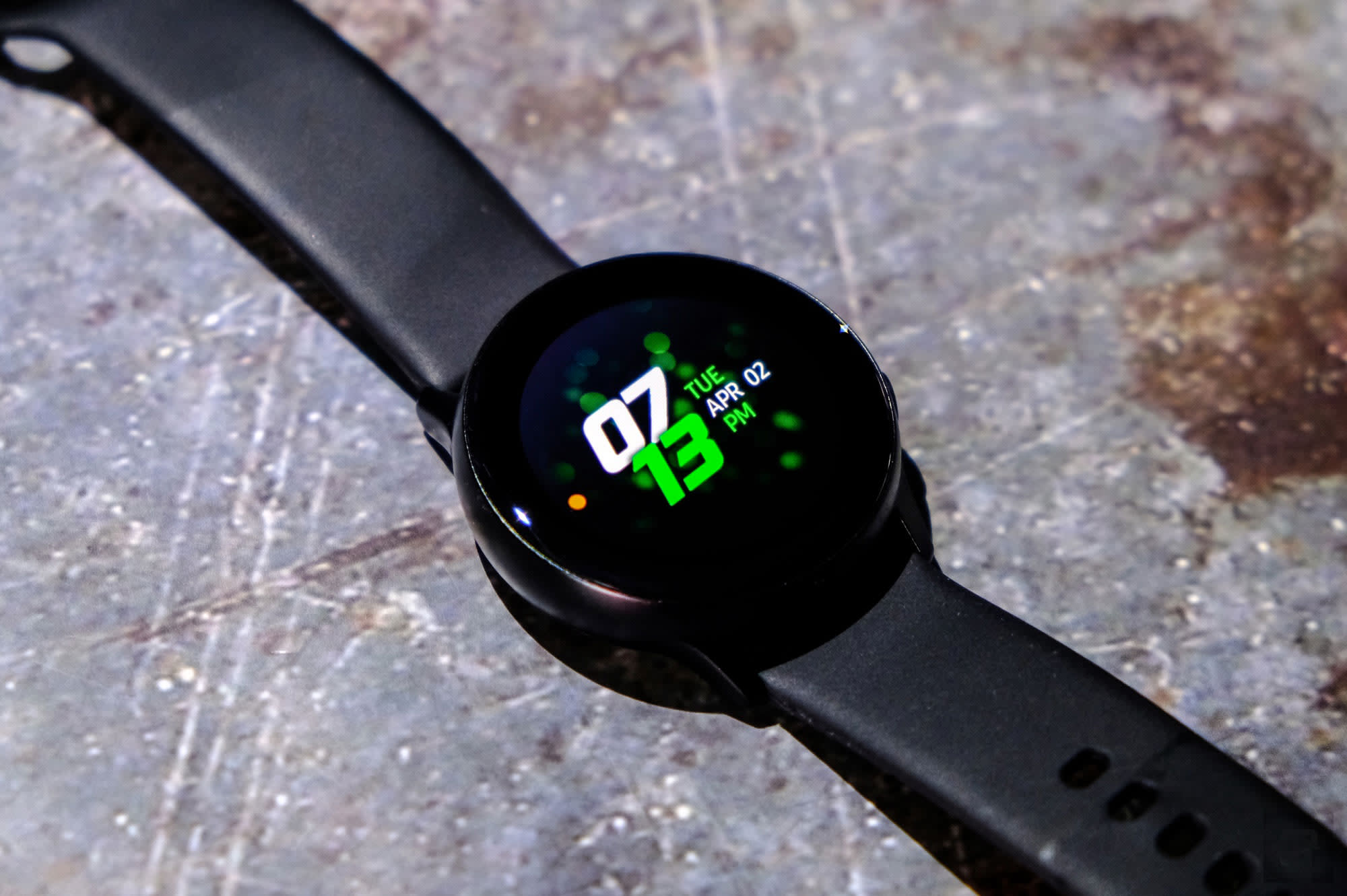 For $200, it offers almost all the features you'd find on its more expensive brother.

Smartwatches may no longer have to be expensive to be good. Case in point: the Galaxy Watch Active. Pitched as a lower cost version of last year's Galaxy Watch, Samsung has boiled that flagship smartwatch down to its essentials. It ditched the rotating bezel, pared down the design and slapped on the word "Active" to appeal to sportier users. This smartwatch packs all that Samsung's flagship wearable has to offer, but at a fraction of the price, which means you'll have to deal with some minor tradeoffs.

Those familiar with Samsung's smartwatches will immediately notice the missing rotating bezel. I'm bummed that it's gone, since it offered precision when navigating Tizen's side-scrolling interface. But the good news is that thanks to its absence, the Galaxy Watch Active is 20 percent smaller and about 60 percent lighter than the Galaxy Watch. In fact, the device is so unobtrusive that it fit under the cuff of all my jackets and I sometimes forgot I was wearing it.

That reduced size is great for comfort, but overall I think the Active looks bland and kind of generic without the bezel. That might be because I have the plain black version instead of the silver, green or rose gold options. But, hey, at least it's not ugly and it goes with most of my outfits.

Without the bezel, you'll have to rely on the watch's 1.1-inch touchscreen and two buttons to navigate the OS. Because the Active's 40mm face is smaller than the Galaxy Watch, it was sometimes difficult to precisely interact with the screen. This watch is not a friend to fat fingers. 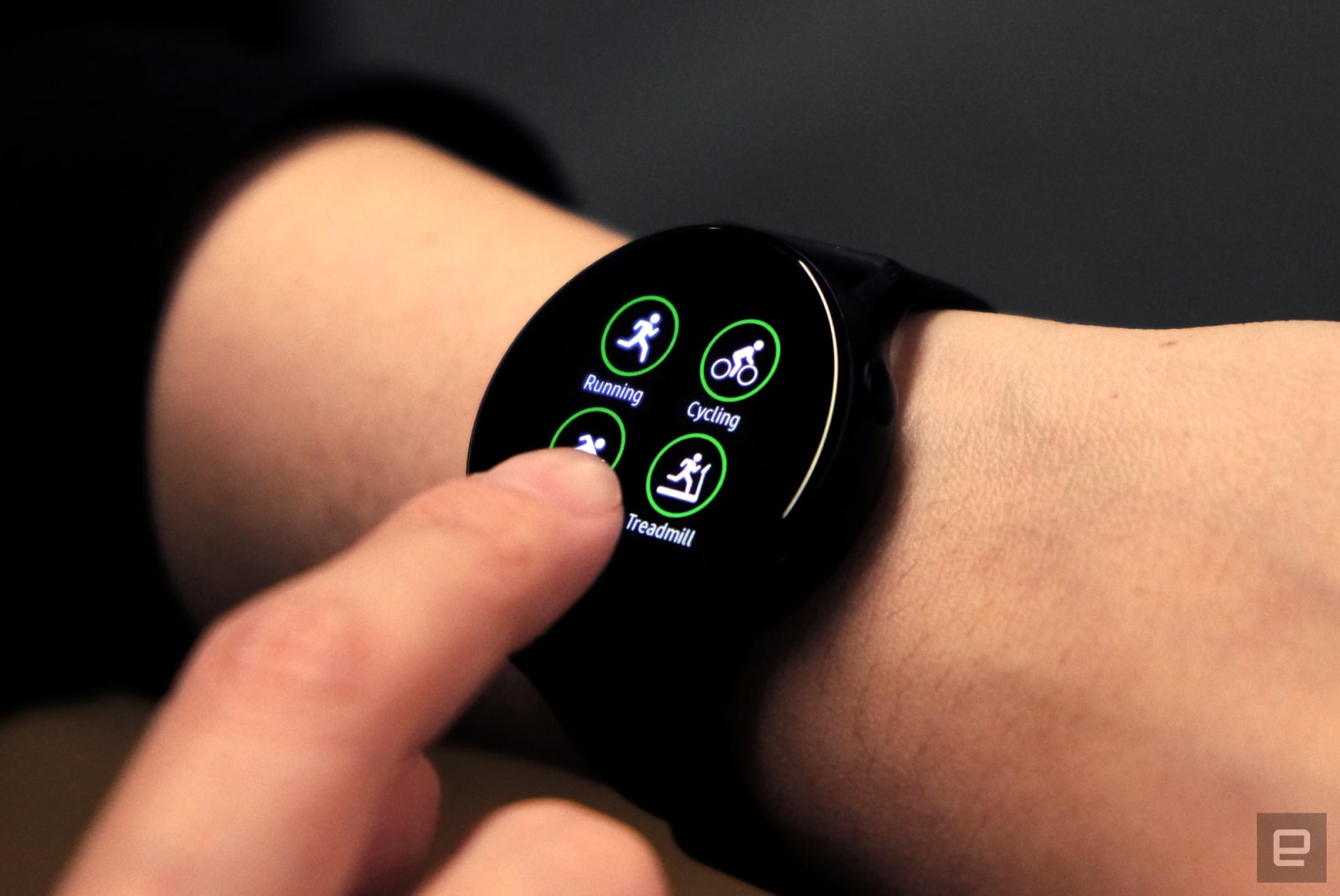 Tizen without a rotating bezel is also a little more swipe-reliant than I like, and going through all the notifications that stack up on the left of the watch face takes some time. Otherwise, the interface is relatively intuitive and easy to use.

The two buttons help things once you figure out what they do. Pushing the top one brings you back a page, while the bottom takes you to the watch face or shows all apps when you're already home. You can also hold down the top button to start Samsung Pay and long-press the bottom key to turn the watch on or off. By default, double-clicking the bottom button summons Bixby, though you can customize this to launch one of a dozen apps, create a reminder, set an alarm, start a workout or pull up your last app.

Speaking of, Samsung's assistant proved surprisingly helpful on the Watch Active. Bixby was smart enough to start the correct workout session when I asked "Start a treadmill run," and also sent messages to my friends using exactly the apps I told it to. It was smart enough to distinguish between a text and WhatsApp, and correctly interpreted my message most of the time. Bixby just feels slightly improved from the last time I used it, which was on the Note 9. Then again, my expectations for Bixby are so low that the fact it was usable at all impressed me. And I did notice that the Watch Active is faster and better at recognizing its wake word than Wear OS watches I've used. 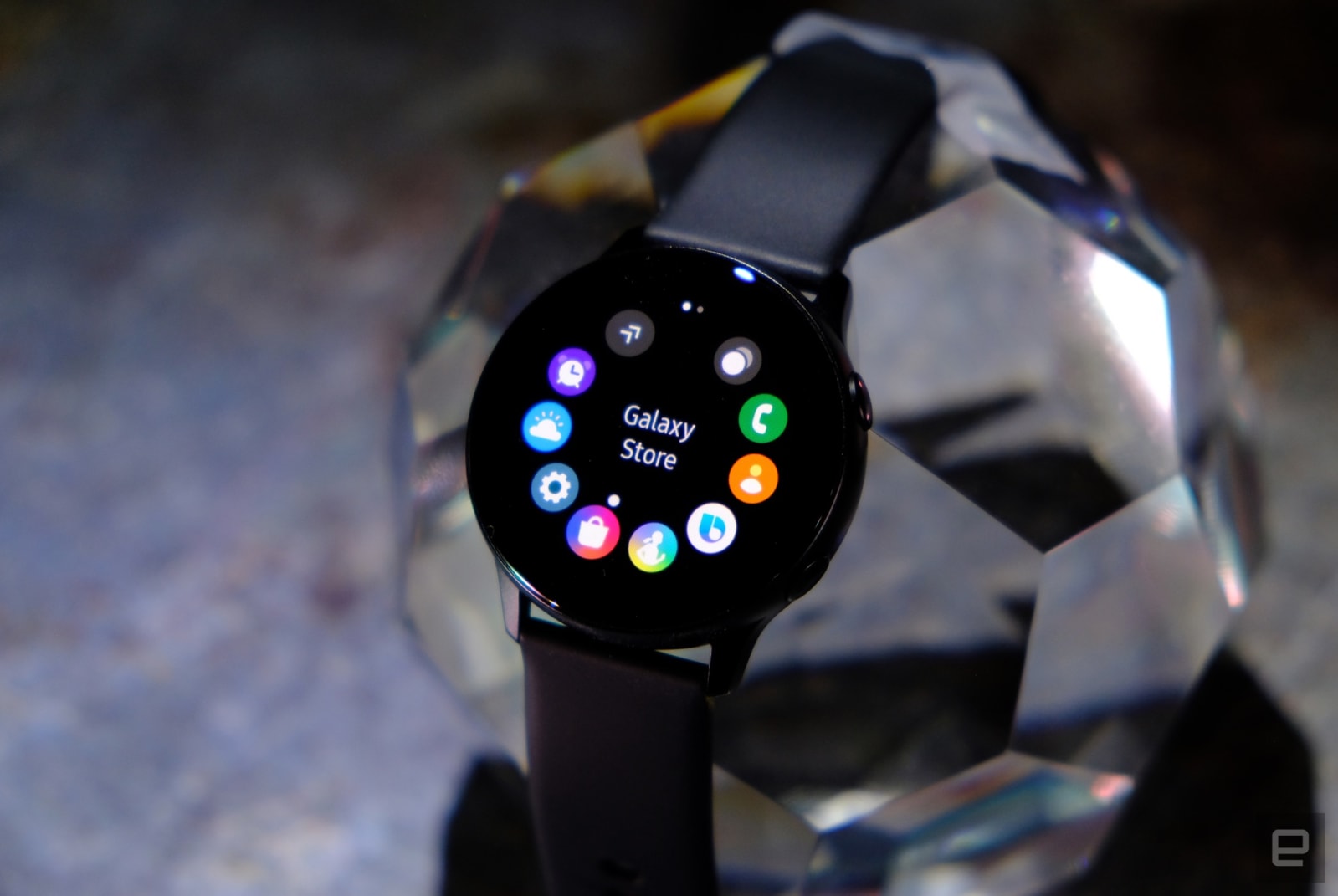 Bixby aside, the Watch Active chugged along smoothly for the most part, thanks to its dual-core Exynos 9110 CPU. Sometimes it struggled to register my touches or launch an app, though. Tizen supports hundreds of third-party apps like Spotify, UnderArmor, Speedo and MapMyRun. There are fewer here than on watchOS or Wear OS, but you'll still find most of your favorite services are available. I couldn't find Yelp or an official Evernote option in the Galaxy Store, but I don't use smartwatch apps much anyway and didn't feel like I was missing much.

One of my favorite things about Samsung's wearables is the Health app. I've found it to be smarter than Fitbit or Google Fit at automatically detecting when I've embarked on a brisk walk or at sussing out the exact time I fell asleep. On Galaxy watches, Health offers a wide range of exercises that I can track, including resistance training or elliptical sessions.

I just wish it collected more relevant data during strength training, like my number of reps. All it does when I launch a weight-based workout is log my pulse and the duration of the session. To be fair, though, most watches don't do that yet, with the exception of some Garmin wearables. 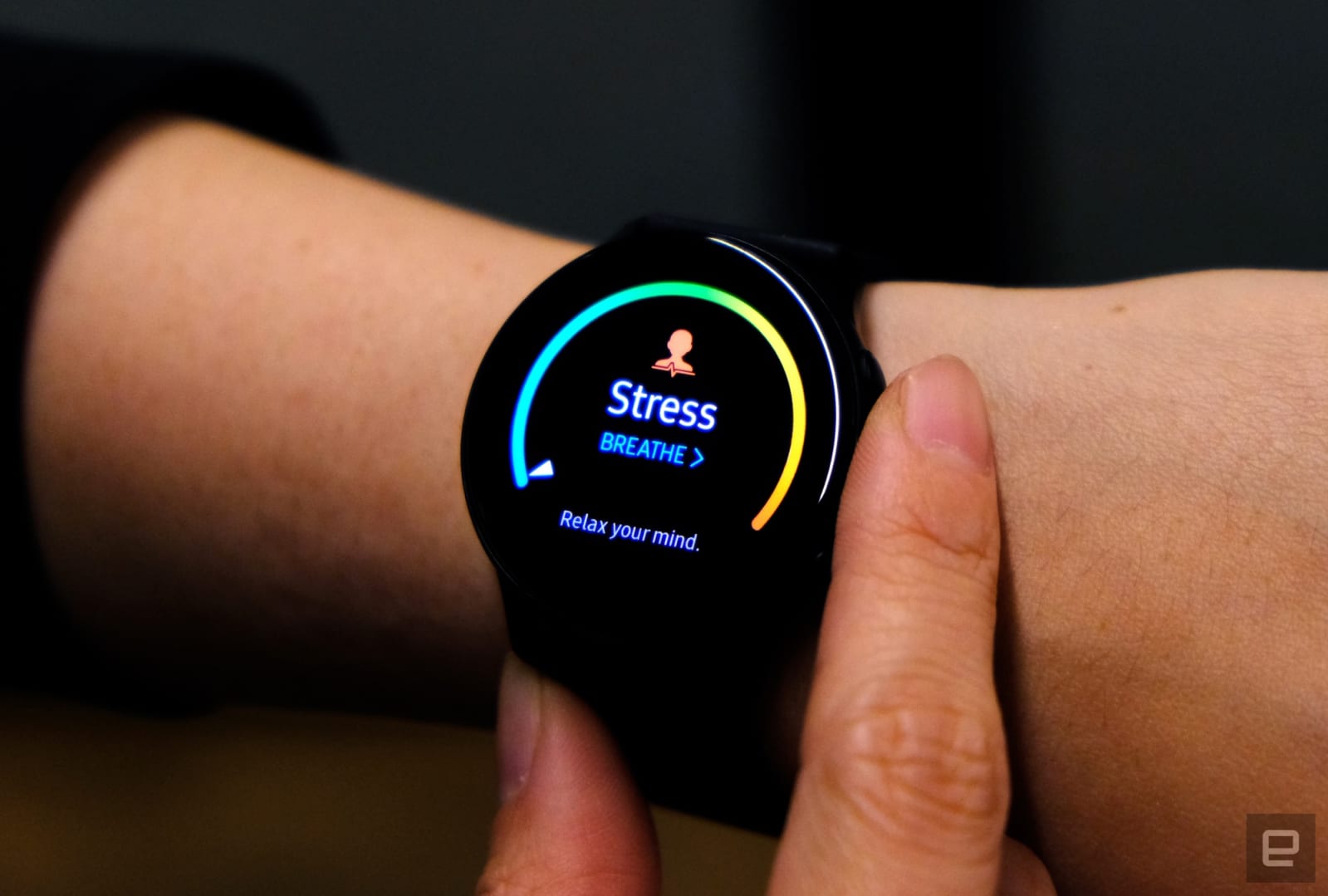 One thing the Active does offer beyond most of the competition is stress measurement, which it does by taking your heart rate and calculating the variance. I've had a busy, stressful week, and the Watch Active's data seemed to match that, though I'm not sure how to verify this. How do you measure how stressed you are, anyway?

I wish the watch was as proactive about reminding me to take a breather as it is at prompting me to get up and move -- it only did so once during two whole weeks. Even then, all it really did was tell me to launch a breathing session. Meanwhile, it nagged me every hour or so when I'd been sitting at my desk for too long, and congratulated me when I eventually caved and walked about. That's a pretty standard feature for a fitness watch these days, but the Galaxy Watch Active felt more accurate and enthusiastic than others I've tested. The Health app also prompts me to check out my weekly insights every weekend so that my physical wellbeing is never far from my mind.

Samsung also said the Active can monitor your blood pressure by calculating it from your heart rate, but this is actually part of a research collaboration with UCSF through a specific app, rather than an actual feature. 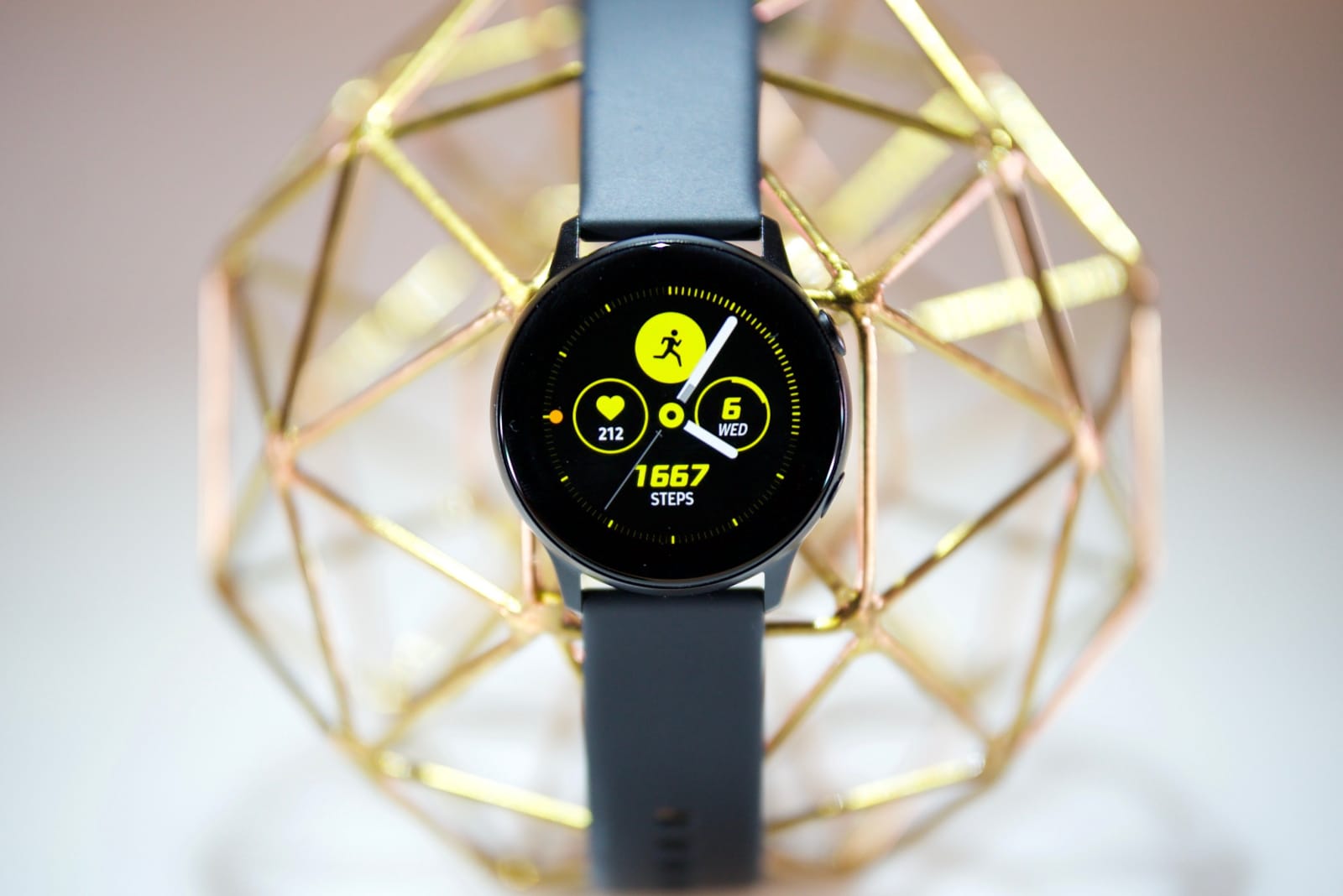 The Active has all the same health-tracking features as its flagship brother, but does fall short on battery life. I generally got about three days out of the 230mAh cell before it prompted me to launch power saving mode. And if I worked out daily that runtime drops to just two days. The Galaxy Watch lasts four days with light use, while the Fitbit Versa clocks almost five days on a charge if I wasn't working out every day.

The Versa is the Watch Active's wearable nemesis, since it lasts days longer and offers powerful fitness tracking features for the same price. But Samsung's device will surely appeal to its loyal fanbase. Those who still want Samsung's hallmark spinning bezel can get it on the Galaxy Watch, which costs at least $100 more and is basically the same as the Active but better-looking and longer-lasting. For $200, the Watch Active squeezes an impressive amount of flagship features into an impressively thin and light body, and is good for anyone who doesn't mind its basic design.

All products recommended by Engadget are selected by our editorial team, independent of our parent company. Some of our stories include affiliate links. If you buy something through one of these links, we may earn an affiliate commission. All prices are correct at the time of publishing.
View All Comments
Samsung Galaxy Watch Active review: Basic doesn't mean bad