The new Android Q beta is a mostly cosmetic update

All you really get are Dark Mode and gesture navigation.

The Android Q beta 3 is here, and like the first public beta of this OS, there's not much to get excited about. This beta doesn't offer the meatiest update, but it is our first look at some of the user-facing features coming to Android Q. Things like Dark Mode and full gesture navigation are here, but more exciting highlights like Live Caption and Focus Mode are both missing. You can try the beta yourself if you're not afraid of potentially buggy software, and if you own one of the 21 handsets that will work with it. That's double the number of devices that supported the beta last year.

Not all the features Google showed off during the I/O keynote are actually available on Beta 3. You'll get gesture navigation and the highly anticipated Dark Mode, as well as apparently Smart Replies with app actions, although we haven't seen that yet and neither have a few other journalists here at the conference. You won't find Live Captions in this beta either, but we did get to check out a demo in person. Also missing are things like Focus Mode, background security updates and chat bubbles. I had a chance to check out the beta on devices that Google itself had on display here at I/O (and therefore presumably would at least be smoother and more reliable than a version you install yourself).

The most obvious new feature, which got a loud, welcoming response during the keynote, is Dark Mode. It's not just a night-friendly mode that saves your eyes; it saves your phone's energy, too. Go into Settings and search for "Dark" and select the Dark theme (as opposed to the Light alternative). This flips the color scheme from dark text on a white background to the reverse throughout the system and in supported apps.

It's important to note here: not all apps support the dark theme. In this beta, at least, supported apps are mostly Google's own, like Photos, Messages, YouTube and Dialer, but these already had a version of the dark interface. Calendar does a strange thing where its startup page will be black or white depending on the mode you're in, but the actual interface is the same light background in both cases.

Google said that it's developers who need to make their apps display a different color scheme when dark mode is activated, and it has tools to help them with that. One of them shows developers what their apps would look like dark mode simply by flipping its colors. If they like the way that looks, the tool can cut down many of the steps needed to add support for dark mode. Otherwise, there are other tools to help them figure it out. 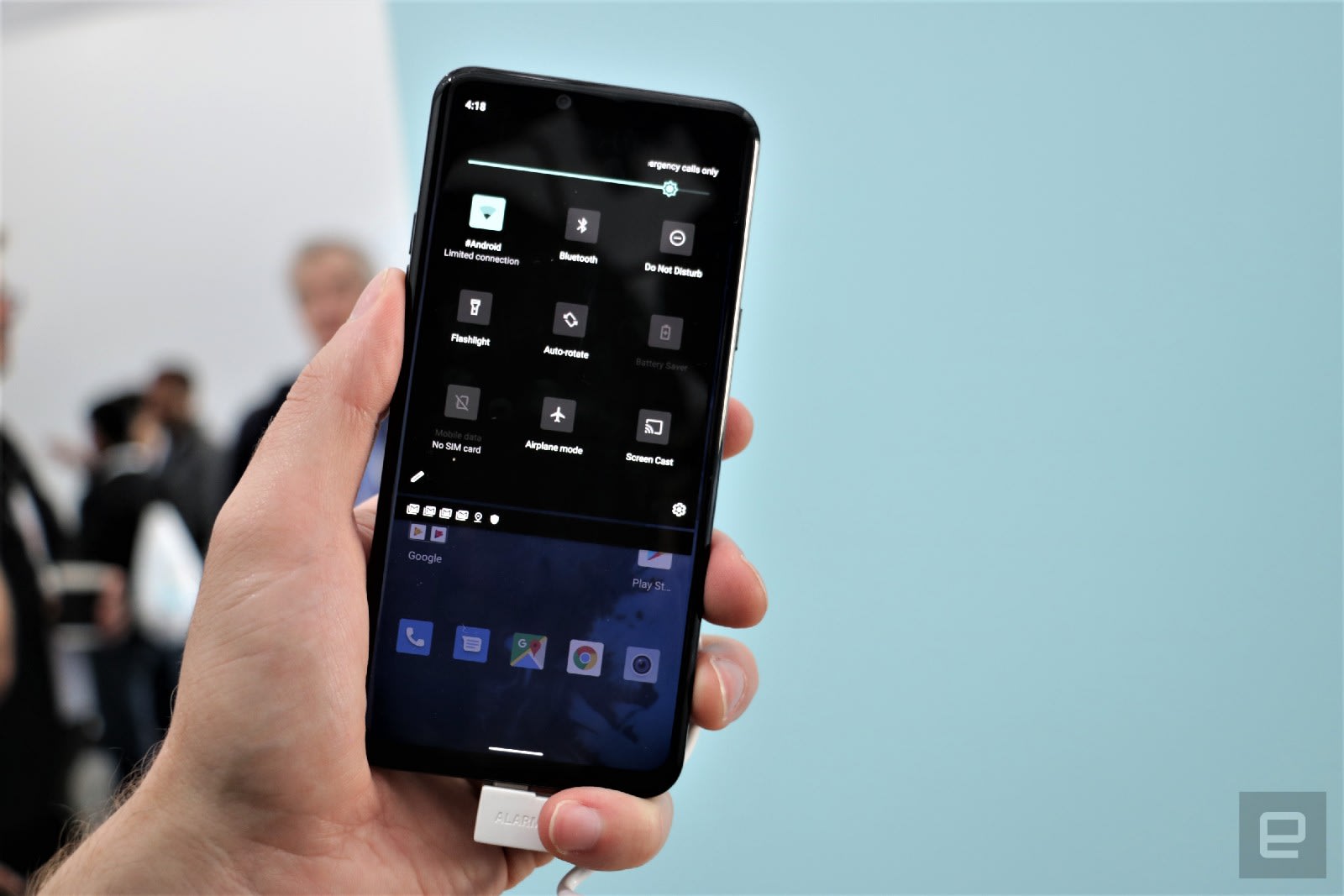 For now, Dark Mode on the Android Q beta 3 is not yet truly system wide, but it's a nice start.

Don't expect the beta to be the same across all compatible Android devices, though. While the beta is available across 21 different phones, it's up to manufacturers to decide which parts of the UI they want to implement. On a Huawei Mate 20 Pro, for example, I tried to enable dark mode but saw no difference when it was on or off. I also couldn't find gesture navigation or dark mode on some of the other handsets on display, like an Essential PH-1 or a Nokia 8.1. Only the LG G8 I was using had all the new features. Basically, your experience with this beta may vary depending on the phone you have.

Another significant change is in navigation. With Android Q, you'll be able to use a fully gesture-based system that resembles the one in the iPhone X and XS. That means you can replace the triangle, circle and square (back, home and all apps) with a swipe-based system. To be clear, you could already do this in Android P, but Q introduces some new gestures and completely removes the back button altogether. 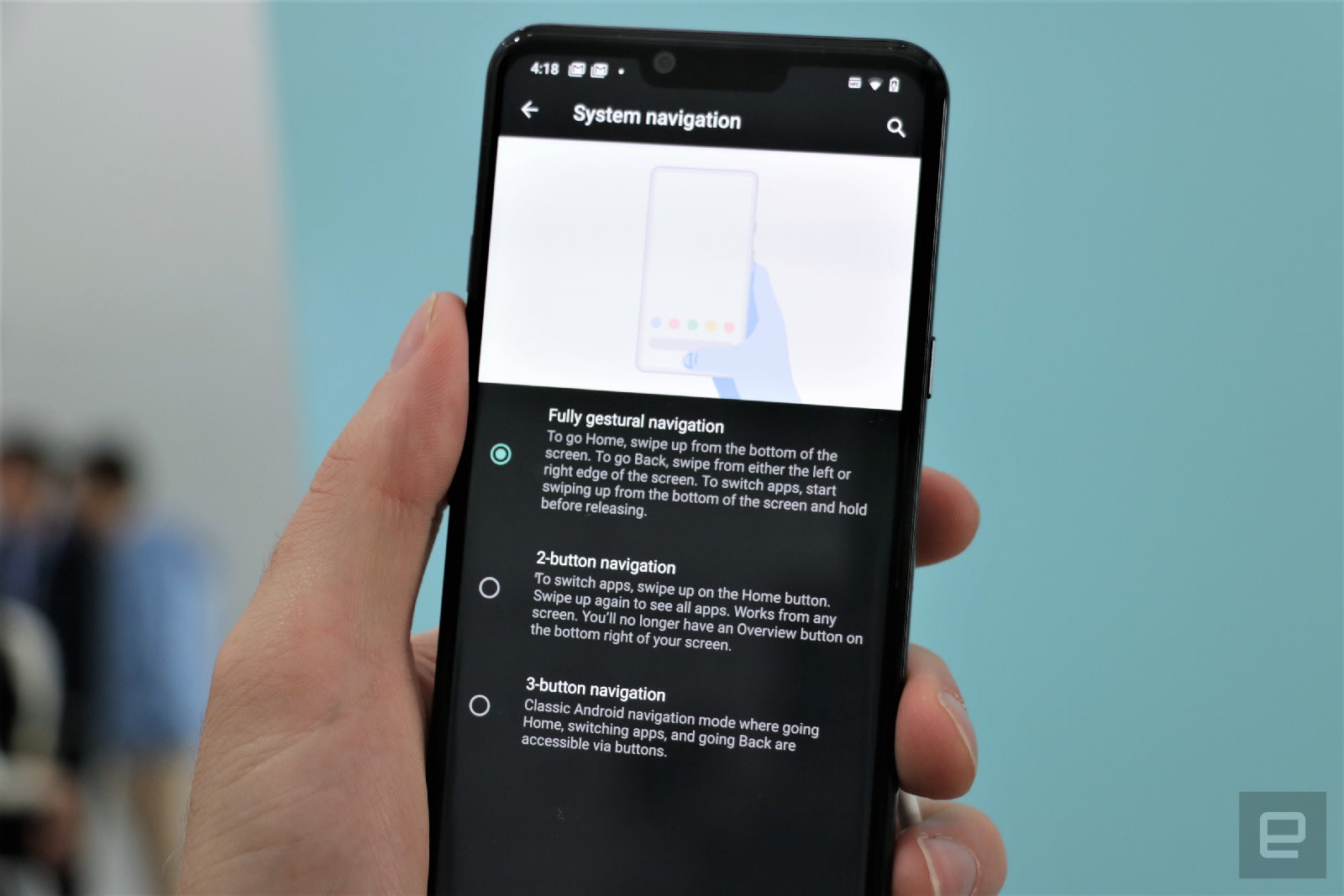 This isn't a mandatory or default mode (not yet, anyway). You can enable this in the settings by searching for "gestures." When enabled, you'll find a bar at the bottom that's slightly wider and thinner than the "pill" in Android Pie. While you could tap the pill to go home, in the Q beta, the bar doesn't do anything when pressed. It's more of an indicator for where you should be swiping.

Flick it up quickly to go to the home page and swipe sideways on it to switch between your open apps. Go back by swiping in from the right edge of the screen. You can pull up the app drawer from the home or recent apps pages, though not if you have an app open. You also no longer summon Google Assistant by long pressing on the pill or home button; instead, you have to drag diagonally up from the bottom left or right corners of the display. Or, you know, say "OK Google."

I was a little upset at losing the back button at first, but over time I realized I like swiping from the edge of the screen. Since I can do so from basically anywhere on the display's edge, so it's handy when I'm gripping my phone nearer the top or holding it horizontally. And if you don't like it, you can always go back to a more familiar button-based interface. 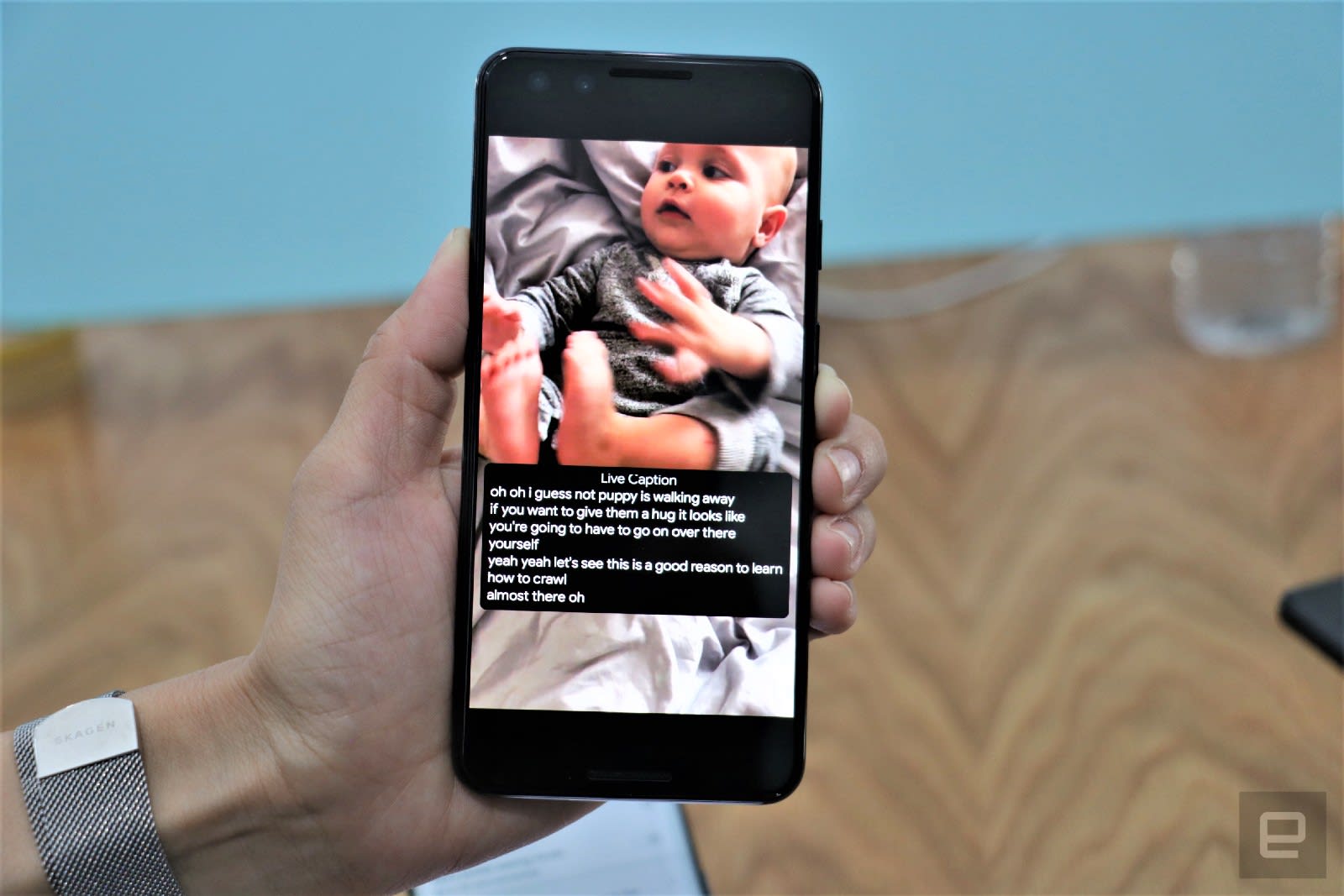 Although we weren't able to try this out for ourselves, and it's not something that you'll get with Beta 3, it was still helpful to see how Live Caption works. A Google spokesperson showed us the feature on her demo phone.

She pulled up a video in her photo gallery and started playing it, then pressed the volume rocker on her phone. An onscreen slider for volume control slid in and below it, a button to toggle Live Captions. She tapped it, and a black panel with a header saying "Live Captions" opened up and floated on top of the video. Words started to appear, transcribing what was being said in the video. The spokesperson pinched to resize the box and dragged it up and down the screen to reposition it. 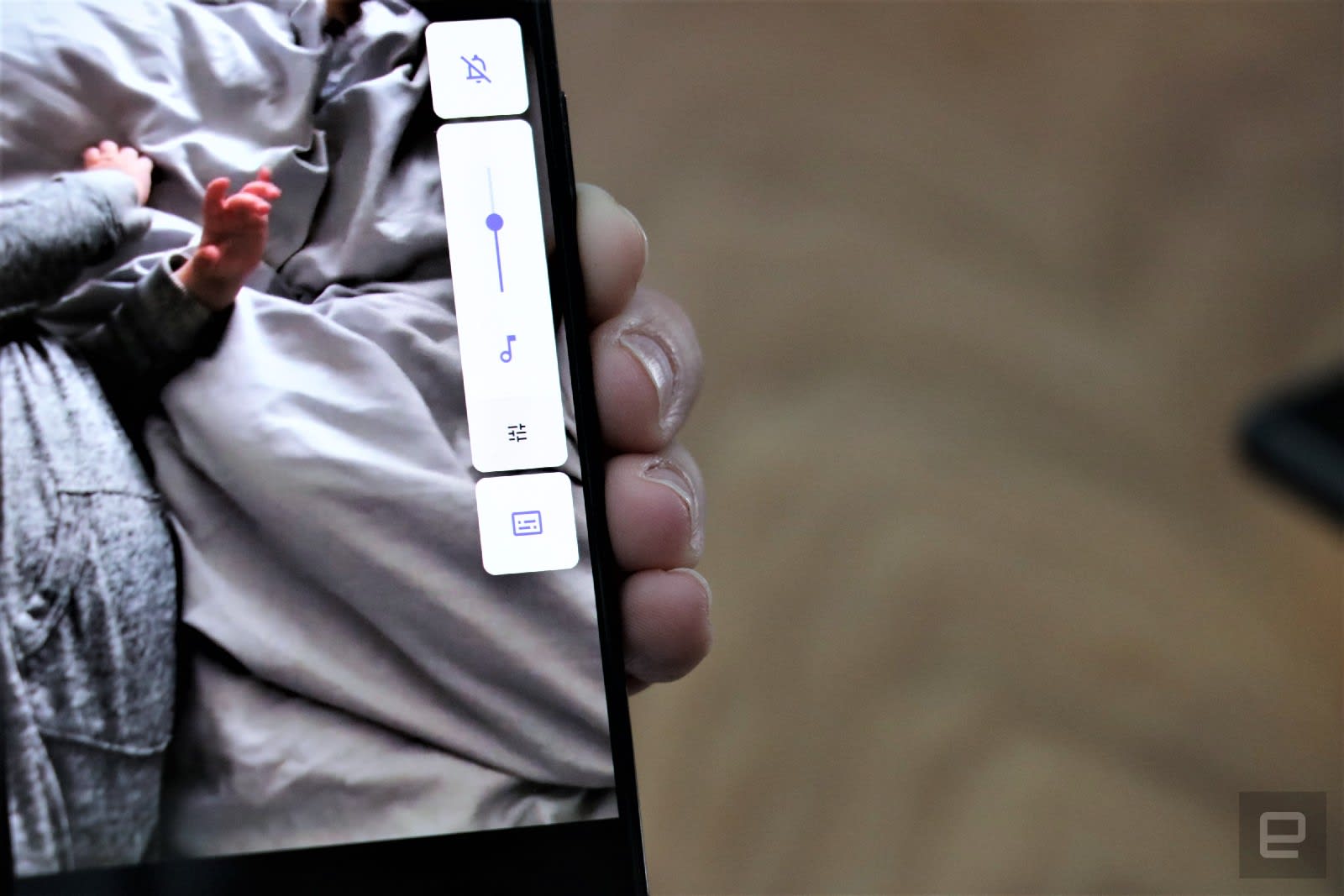 My favorite thing about Live Captions is that it's a systemwide feature and will work with basically any audio output from your device. That means you can get captions for not just Instagram Stories and the latest viral video, but also for podcasts or other sound-only media. It's not yet clear whether you can do things like copy and paste text from the caption panel, but that would be really useful. It's not a stretch to imagine that work anyway, considering you can already copy and paste text from open app windows in the All Apps screen.

It's not yet clear when Android Q itself will roll out and what other features might be available. Plus, what namesake dessert can Google find that starts with the letter Q? We'll have to wait till later this year to find out. For now, though, the Q beta is a good way to make your phone feel refreshed, even if the updates are mostly cosmetic.

All products recommended by Engadget are selected by our editorial team, independent of our parent company. Some of our stories include affiliate links. If you buy something through one of these links, we may earn an affiliate commission. All prices are correct at the time of publishing.
The new Android Q beta is a mostly cosmetic update
android
android q
android q beta
android q beta 3
gadgetry
gadgets
gear
google
google io 2019
googleio2019
mobile
operating system
os
pixel
software