The camera zoom alone will tempt some.

Ever the pragmatist, my grandma always told me that a "third-class ride was better than a first-class walk." That may not be the case when it comes to dirt-cheap smartphones, which can be so bad that you almost prefer no phone at all. Companies like Honor are bucking this trend, building phones that make you feel like you're riding in first class with a third-class ticket. And that's the ethos behind the company's latest phones, dubbed the Honor 20 series.

The three handsets are called the Honor 20 Lite, Honor 20 and Honor 20 Pro, and you can imagine the role each one plays. The 20 Lite is a stripped-down handset that has a lot less in common with its peers and is designed for entry-level users. The Honor 20 and Pro, meanwhile, are beasts designed to serve the twin masters of photography and gaming. And, thanks to some smart cost cutting, feel like flagships, albeit ones that take a far smaller chunk out of your wallet.

Most phones look the same these days, so Honor gets props for finding one way of making its stuff stand out in a crowd. The Honor 20, like its predecessors, has a glossy back with a gradient / Ombré that shines in strong light. Honor says that its Dynamic Holographic Design is the product of three layers of glass, sandwiched together to form the phone's chassis. 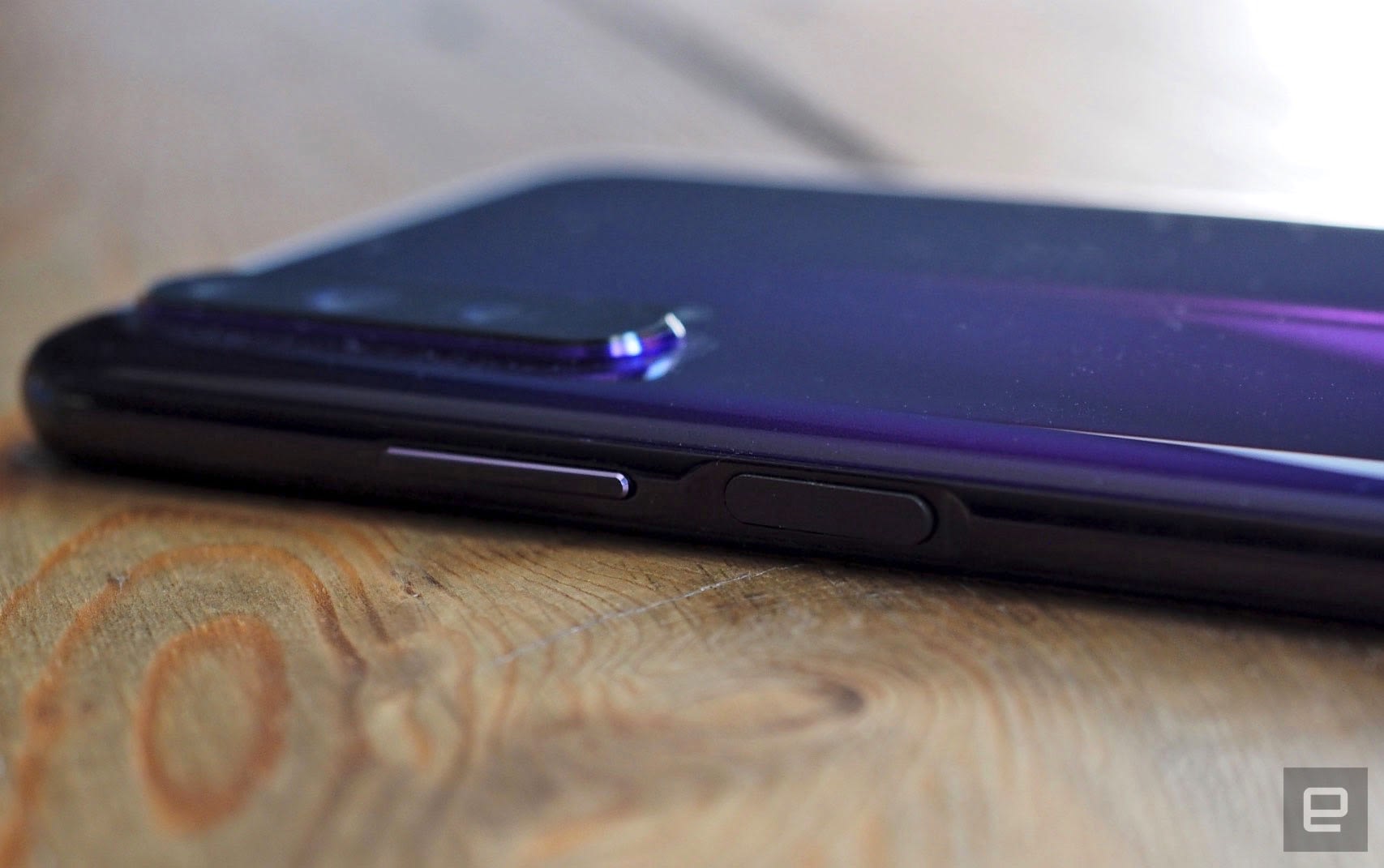 This includes a toughened glass case, which sits on top of a color layer, with a choice of shiny blue or shiny purple. Beneath that, a layer of reflective crystals help bounce light around, letting it shimmer and shine better than a thousand sequins. And, as an aside, photographing this phone has been all sorts of difficult, not to mention blinding if it catches the light at a bad angle.

A company spokesperson said that the process is exacting, but it's also incredibly wasteful: for every 100 cases made, only 20 make it on to a device. Unfortunately, the glossy back is a magnet for fingerprints, fluff and is also tough to hold on to. I haven't dropped this thing yet, but if I bought one, the first thing I'd do is slam it into a case that offers some semblance of grip. The big selling point for the Honor 20 and Pro is in imaging, with both packing impressive cameras that promise to make you think twice about taking a camera along to big events. The Pro has four cameras on the back, with an f/1.4, optically stabilized 48-megapixel primary sensor, flanked by a dedicated super-wide angle (16 megapixel, f/2.2) and telephoto (8 megapixel, OIS, f/2.4) units. The primary camera uses Sony's quad-bayer IMX586 sensor, which is going to be showing up in plenty of phones in the coming months. And, with those three combined, the phone has a 3x lossless optical zoom, 5x hybrid zoom and up to 30x digital zoom. Rounding out the quartet is a far less common sight: a dedicated 2-megapixel, f/2.4 camera for macro photography. Shoot an object within four centimeters and you'll get a clear (but admittedly lower-res) image of something in a crazy close-up.

The Honor 20, on the other hand, still has a quartet of lenses, but you'll lose the ability to boast about how far your zoom will travel. You start with the same 48-megapixel camera and sensor, but with a narrower aperture (f/1.8). The telephoto unit is gone, swapped out for a 2-megapixel depth-assist lens, but that's it for the major changes.You'll still get the macro camera, wide-angle camera and the same AI imaging features that the company continues to make a big deal about. A lot of the photography work is done on-device, a good example being with Honor's AI Ultra Clarity mode. If you're unfamiliar, it's essentially a way of merging a series of images to create one, supposedly sharper, image -- similar to the way HDR works. Sadly, it's the sort of trick that works best if your camera is locked off on a tripod, rather than in your fragile, moving human hands. If you shake (and you will), then you'll very easily see the blur that comes with this series of exposures.

Now, I'm in two minds, here, because while the images are packed-full of pixels, they're not necessarily DSLR-beating. You're getting something close to the camera performance of the P30 (which you can, and should, read about here), but not quite. In a lot of my pictures, the colors are a little washed, and lack the vividness and romance you find on other platforms.

On the upside, the zoom features are pretty fantastic, especially if you use the 5x hybrid zoom to pull into shots. At that sort of range, you're easily able to pick out little details in buildings you wouldn't otherwise be able to see. And, even as far as 20x, you're getting the sort of zoom-and-enhance specs that would make a detective's job super easy. But beyond that point, you're getting the usual digital noise and blur that make the images unviewable. During then briefing, Honor reps told us to "shoot the moon," which wasn't a reference to the documentary of the same name. Instead, the company promises that the quartet of lenses, and the AI magic contained therein, will let you actually shoot images of the moon. On a clear evening, I was able to try this, snapping our satellite with a pre-production Honor 20 Pro and an iPhone 8 Plus. Even though you're not going to be writing home about the result, the difference is staggering.

Bleeding-edge technology found in flagships may be great for bragging rights, but not everyone needs to show off how wealthy they are. A pricey 4K display on a phone is, for instance, a bit of a waste if the most you're doing is watching YouTube clips in the bathrooms at work. Here, Honor has opted for a 6.26-inch IPS LCD display (with a resolution of 2,340 x 1,080, which works out to 412PPI) with on-trend skinny bezels. In the top-left corner, there's a 4mm hole which accommodates the 32-megapixel selfie camera. That puts it a little ahead of the 25-megapixel lens found in the Honor View 20's hole punch, released earlier this year. There's not much you can say about an LCD display at this point that hasn't been said a trillion times before. Colors are deep and rich, viewing angles are great and the holepunch is barely noticeable when playing video, full screen. And, from an aesthetic point of view, I find a 4mm hole way less distracting than a notch when you're watching movies on the go.

These days, rear-mounted fingerprint sensors have a whiff of cheapness about them, as they've already begun to look dated. After all, showier phones have whizzo face-scanning sensors or a below-display ultrasonic fingerprint scanner. Honor isn't asking its buyers to splash out that sort of cash, so it's opted for something both elegant and cheaper. It's added a fingerprint scanner on to the sleep/wake button, like so many Sony devices -- although it's only ideal if your index finger naturally falls on to the button if you hold it in your left hand. The Honor 20 is packing slightly less battery life than its Pro sibling, with a 3,750mAh cell compared to the Pro's 4,000mAh. Both come with 22.5W Honor SuperCharge, which promises to get the battery charged to 50 percent in just 30 minutes. In my limited experience, and as an intensive phone user, I got down to 30 or 40 percent in a day with the Honor 20 Pro, with several hours of tweeting, YouTubeing and general internetting. When playing games, that number began to fall a bit faster, and I could easily eat 10 percent battery in 20 minutes of Fortnite.

Sadly, the phone's speakers are a little weedy, despite the promise of virtual 9.1 surround (both on device and connected over Bluetooth). In a one-on-one fight with my own iPhone, I found that the Honor 20 Pro couldn't match it for overall loudness. However, what the Pro lacked in volume, it made up for in subtlety, with richer sound overall. The bundled USB-C headphones were, as is tradition, awful.

If you're an Android purist, you'll be less delighted with Honor's Magic UI, which succeeds EMUI on its handsets. I've never really gotten the hate for the Huawei-made skin because I think it simplifies Android's often messy UI in a way that makes sense. Animations are smooth and the built-in themes are nice, but it's hardly as controversial as some folks may make out. Honor phones are skewed toward younger folks with a focus on social media, photography and, crucially, gaming. Both the Honor 20 and 20 Pro ship with GPU Turbo 3.0, which it says "re-architects how games are processed at the system level." According to AnandTech, the company runs games with machine-learning tools monitoring the silicon's power levels. Then, when it has worked out the most efficient way of pushing energy to the GPU, it creates a profile that's pushed out to the devices. Honor wouldn't talk about what games have been tested for optimizations, but given that Fortnite installer is included on the homescreen, you can guess.

And given Fortnite's status as the worldwide darling, it made sense to try to play it on the handset with the settings turned up to max. Surprisingly, the game ran perfectly, albeit while the phone started to run pretty hot and with a significant drop in battery life. Honor operates across the globe, including Europe, the Middle East, Africa, Asia and China, and in those regions, the 20 series will go on sale soon. The 20 will be priced at €499 ($556), while the pro will set you back €599 ($670) -- in the UK, the 20 will cost £399.99, with a Honor Watch Magic thrown in for free, but there's no pricing on the Pro just yet. From what little time we've spent with these devices so far, it's safe to say that Honor has, once again, made a cheap phone not feel like one. This handset makes a mockery of the notion that the only good smartphones are ones that cost $1,500.

Of course, as a subsidiary of Huawei, this phone isn't likely to be making the journey to the US unless you import it. It looks like, for now, the Honor 20 will get out before Google withdraws Android support for Huawei devices. But, given the company's reputation and status as a target for ire within the US, be advised that you might get a hostile reception if you walk down the street with one.

If there's one issue, it's the question of whether Honor's imaging hardware can beat Google's imaging software. After all, the newly released Pixel 3a and 3a XL are priced at $400 and $480, respectively, and come with some pretty tasty cameras themselves. Regardless, if you're in the market for a decent phone without paying a premium, you've never had it so good.

All products recommended by Engadget are selected by our editorial team, independent of our parent company. Some of our stories include affiliate links. If you buy something through one of these links, we may earn an affiliate commission. All prices are correct at the time of publishing.
View All Comments
Honor 20 Pro hands-on: You’ll forget it’s not a flagship phone