And there's a bit of 'Starcraft 2' for good measure.

Welcome back to Engadget's Gaming IRL, a monthly segment where we run down what our editors are playing. For the most part, we've been carving our way through Sekiro: Shadows Die Twice, the latest bit of gamer punishment from the From Software folks. And one of our editors decided to dive into some classic Blizzard titles: Diablo 3 and Starcraft 2.

It's easy to tell that Sekiro comes from the same folks who gave us Dark Souls. It's tough, forcing you to master every intricacy of its combat system. You're expected to die -- a lot -- and you're punished when you do. And it uses brutal boss battles to test your mettle. But unlike the Souls games (and their gaming cousin, Bloodborne), I can't stop playing Sekiro. In some ways, it's even more difficult than From Software's earlier titles. But its faster combat, vertical movement (via a trusty grappling hook) and stealth elements makes it even more addictive.

Maybe I've just been starved for a true Tenchu successor. From Software purchased the rights to that series in 2004, and Sekiro was initially developed to be a Tenchu title. During the PlayStation era, the Tenchu games were my introduction to satisfying stealth gameplay. I couldn't get enough of sneaking up on enemies and taking them out before they knew what was coming. Unfortunately, that series was always held back by the aging PlayStation hardware, with blotchy character models and sluggish frame rates. (I never played the follow-ups, but they weren't as well-received as the first two games.) Sekiro, which I'm playing on my PC gaming rig, finally gives me a similar experience, with richly detailed characters and environments at 4K and 60 fps. 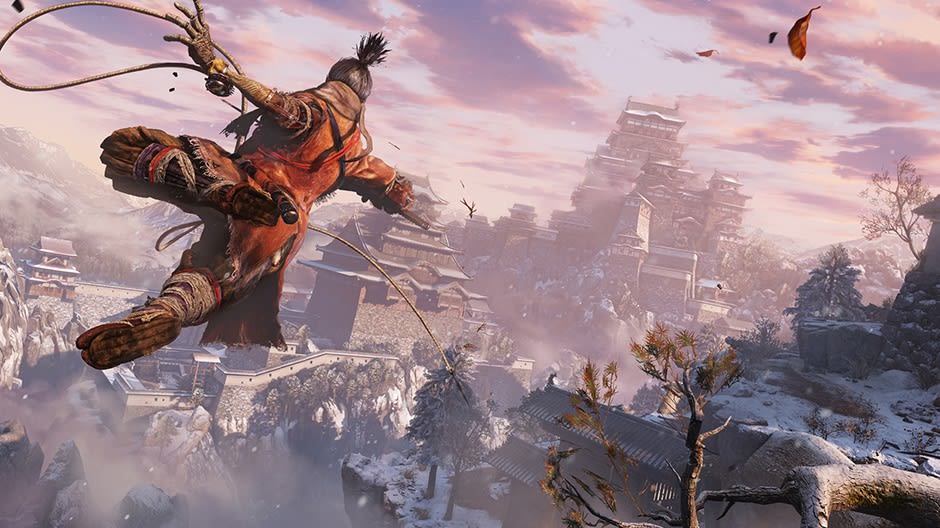 Another plus? It's like playing through a classic samurai or ninja film (though they didn't usually involve battling huge supernatural monstrosities). Sekiro's combat isn't just about winnowing down health bars -- you're forced to confront many enemies defensively, with your guard up and parry trigger fingers at the ready. The experience is incredibly tense, but it makes every deathblow all the more rewarding. Unlike the Souls games, you can't always run off and level up. Instead, the key to the game's toughest battles is sharpening your fundamentals: deflect every hit on time, know when to dodge or jump and make every hit count.

At times, it can be just as punishing as the Souls titles. Even though you can resurrect your character, if you get killed for good, you'll lose half your money and experience points for your next level. (So if you've earned 700 out of 1000 points, you'll be left with 350.) But in many ways, Sekiro is far easier on the player. You've got an immortal training buddy who can help you master all your moves. Your save points usually aren't too far from the bosses. And the game actually explains some of its wonkier gameplay aspects, like using a specific item to defeat ghostly enemies. I've always been a non-standard Blizzard fan. I've been a huge fan of their games since Warcraft 2, but despite a stint into Heroes of the Storm, I've never really gotten into their multiplayer offerings. I made an effort to get into Overwatch, but it never stuck, which has made the last few years a serious drought for Blizzard single player. When I started seeing articles about the quality of Diablo 3's Switch port, I decided it was time to do something. I had only vague memories of playing through Diablo 3 as a Demon Hunter when it first came out, and recalled it being a pretty unsatisfying experience. While I did pick up the expansion Reaper of Souls, I have even less recollection of that.

Reading about how much the game had been improved since launch, I reinstalled it, bought the new Necromancer character and set off to find the Black Soulstone with my legion of skeletal buddies. My first impression? The game has seriously improved. Loot drops are more exciting; the revised difficulty settings let you pick your challenge and earn greater rewards (which is crucial because even with a fresh character, below the Torment II difficulty, the Necromancer made chunky mincemeat out of everything within seconds) and the adventure mode adds an arcade-y and endlessly replayable end game.

I enjoyed raising the dead and exploding corpses as my necro-buddy so much that I played two acts before I decided to take a look at my old characters. What I found was shocking. Despite having almost no memory of playing this game back when it released, or when the expansion came out, I'd apparently already sunk more than 150 hours into it across four different characters. I'm not sure what that says for either the state of my brain or the memorable qualities of an action-RPG game, but at least everything about it feels fresh and new.

As I kept opening Blizzard's app to launch Diablo 3, another game kept calling to me. I'd been an obsessive fan of the original Starcraft, but I'd only played the sequel once, and similarly, it left almost no impression on me. I remembered more of it than Diablo 3, but that's faint praise. Blizzard split the single-player campaigns for Starcraft into three separate releases, and I'd never even gone back to finish the last two. I decided it was time and jumped back in.

A decade later, my impression of replaying the Wings of Liberty campaign is that it's... fine. After all this time, the variety in the single-player missions is still pretty astounding. And the metagame of upgrades and resource management gives you a lot of flexibility in they type of army you field, but the place where it all seems to fall apart is the plot. I realize playing strategy games for the story might be like buying a car for the cupholders, but I loved the world building and the feel of real stakes in the original Starcraft.

I might just be nostalgic, but when I replayed the remastered version last year, it was still effective. In contrast, Starcraft 2 seems to be working overtime to reduce its cast to two-dimensional caricatures. And it dispenses with any sense of real conflict or drama in favor of ladling on quasi-mystical nonsense and a half-baked Chosen One plot. Add to that some truly unfortunate writing choices (The only person of color in the game is essentially a drug-dealing Rasta criminal? And the interplanetary space monster Kerrigan is reduced to a rescue mission?), and it's all kind of a bummer. Still, the gameplay mechanics are strong enough to keep me coming back for more, and who knows, maybe the writing will improve in parts two and three. And if it doesn't, well, evidence suggests I'll just forget all of this anyway.