The second season of Apex Legends goes live today, and in addition to new characters, major map changes and improved weaponry, we'll also see the introduction of Ranked Leagues. In a blog post, the game's developers said Apex is a "dynamic game that takes time and effort to master," so Ranked Leagues will be a place players can go to prove their skills and gain recognition for their hard work.

Major features include a ranked ladder showing players how they stack up against everyone else (and in-game rewards based on your rank at the end of the season) and skills-based matchmaking. The developers say they plan to start out with a score-based system, but they don't intend for that to last forever. "Our goal is to take data from the launch of Ranked Leagues and adjust the system over time," they say, so you should expect future changes to both the scoring and matchmaking system, as well as seasonal soft-rests for new seasons.

So how will it work in practice? Ranked Leagues will run in competitive periods called "Series" -- the first of which will run for the entire duration of Season 2 -- and feature six competitive tiers: bronze, silver, gold, platinum, diamond and Apex Predator. With the exception of Apex Predator, each tier has four divisions. Work your way through each division to the top of your tier, and then you can progress to the next. There's no demotion, either, so no matter how many matches you crash out of, you won't go backwards once you've secured your place within a tier. 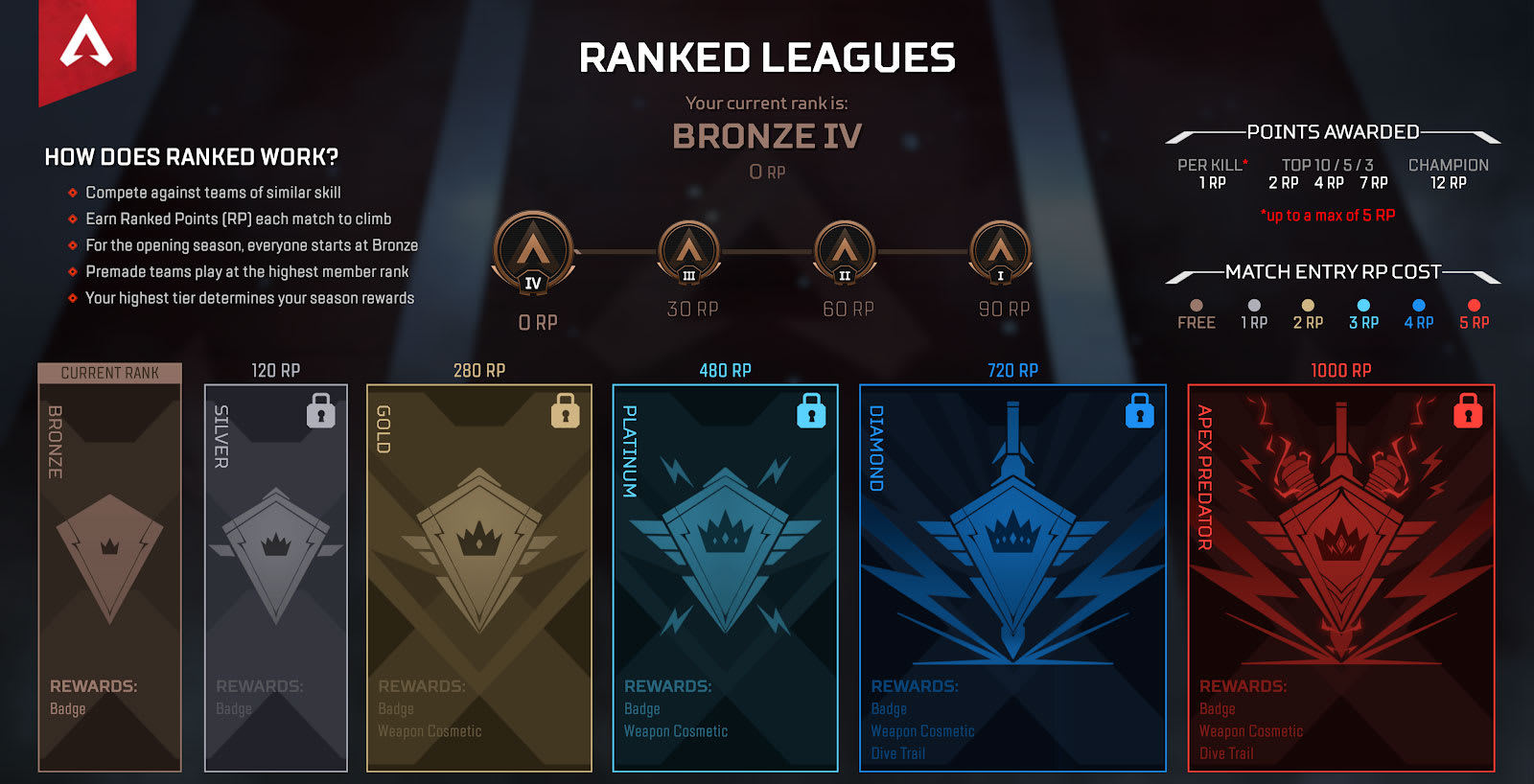 Each match will cost a number of Ranked Points (RP) based on your tier, from free for bronze matches, up to 5RP for Apex Predator matches. You'll earn RP during each match based on your performance; kills are worth 1RP for example, while finishing in the top five will net you 4RP. There are various caps, though, so the most you'll be able to earn per match is 17RP before the entry fee.

Ranked Leagues is designed to be a high-stakes, high-reward environment, and the developers expect players to show commitment to their matches even when things start going south. As such, players that abandon their teams will be hit with a matchmaking penalty that'll bar them from joining new matches for a varying period of time. This could range from five minutes up to a whole week.

Other features include loss forgiveness (similar to the Elite queue), badges and rewards. Although, as the developers say, the whole system is very much in the testing stage right now and they'll be making updates on the fly. Keep an eye on the official Twitter feed for details on how and when these will happen.