It comes with a handful of magnetic accessories.

Insta360 -- as the name implies -- is usually known for its 360-degree cameras, but this time, it's braving sports cam territory with a little surprise, literally. The Insta360 Go is apparently the "world's smallest stabilized camera" -- so small that you can almost hide it behind your thumb, and it also only weighs 18.3 grams. Better yet, the device has a magnetic backside, which lets you snap it onto one of the bundled accessories. Those include a pendant for wearing the camera on your chest, an "easy clip" for your headband, or a pivot stand which can be screwed onto a sticky base or any selfie stick. When done, just throw the Go back into its charging case, then you can plug the assembly into either an iPhone or Android device for file transfer.

While the Go is a splashproof (IPX4) sports cam by nature, it's geared more towards casual filming -- think bite-size clips for Facebook stories, Instagram stories, Snapchat and TikTok. but with the convenience of this tiny form-factor, its versatile accessories plus Insta360's proven FlowState stabilization.

To complement the hardware, the Go comes with an app that offers several AI-powered video templates for automatically picking the right moments (this feature won't arrive on Android until later, however). These "FlashCut" themes will look for food, skyscrapers, crosswalks, beaches, smiling faces or specific types of motions. Which makes it sound perfect for users who want to churn out fancy clips without the hassle of digging through the library. This works well for me most of the time: I just pick a theme, hit the "FlashCut" button, and the app throws its own selection of clips into the timeline. If needed, I can adjust each clip's time range or even swap out some of the clips before exporting the project.

The Go itself offers more than just standard photo and video shooting; you can toggle high-speed 'hyperlapse' and slow-motion record with a few button clicks, or capture interval video shooting and timelapse photography using the app via Bluetooth. Regardless of which accessory you use the camera with, you can quickly trigger the camera by either pressing the power button on the back, or pressing the shell on the other side to push the button against the accessory. This is the only button on the device, so you'll just need to remember how you customize the four button actions.

By default, a single press when powered off initiates a 30-second recording, but you can always press again to cut it short. The other three modes require turning the camera on first, which is a long press until the camera vibrates twice and shows a solid white LED. Then it's just a matter of how many times you press: hit once to take a photo (3,040 x 3,040; exports up to 2,560 x 2,560), twice for a hyperlapse, and three times for a 100fps slow motion. All four button modes can be remapped using the app. If you're unsure, you can tell the capture modes apart by looking at how fast the LED is blinking -- hyperlapse is the fastest, and slow-motion is the slowest (duh).

For standard videos (2,720 x 2,720 at 25fps; which exports to 1080p stabilized), the camera shoots up to 15 or 30 seconds of footage each time, and each charge will allow for up to about 20 minutes worth of footage in total. There's no option to record further than 30 seconds, and the battery life is nowhere close to what GoPro cameras offer, but Insta360 expects you to throw the camera back into its charging case between takes, and that adds an extra 2.5 charges while also letting you offload content to your phone. As such, you actually have enough juice to capture a little over an hour's worth of footage -- just not continuously.

The Go is also limited by its 8GB of onboard storage, which is enough for about 28 minutes worth of standard footage. In other words, if you're shooting on a single charge and with empty storage, the internal battery will die before you run out of space anyway. InstaGo suggests that you should transfer files to your iPhone on a regular basis. 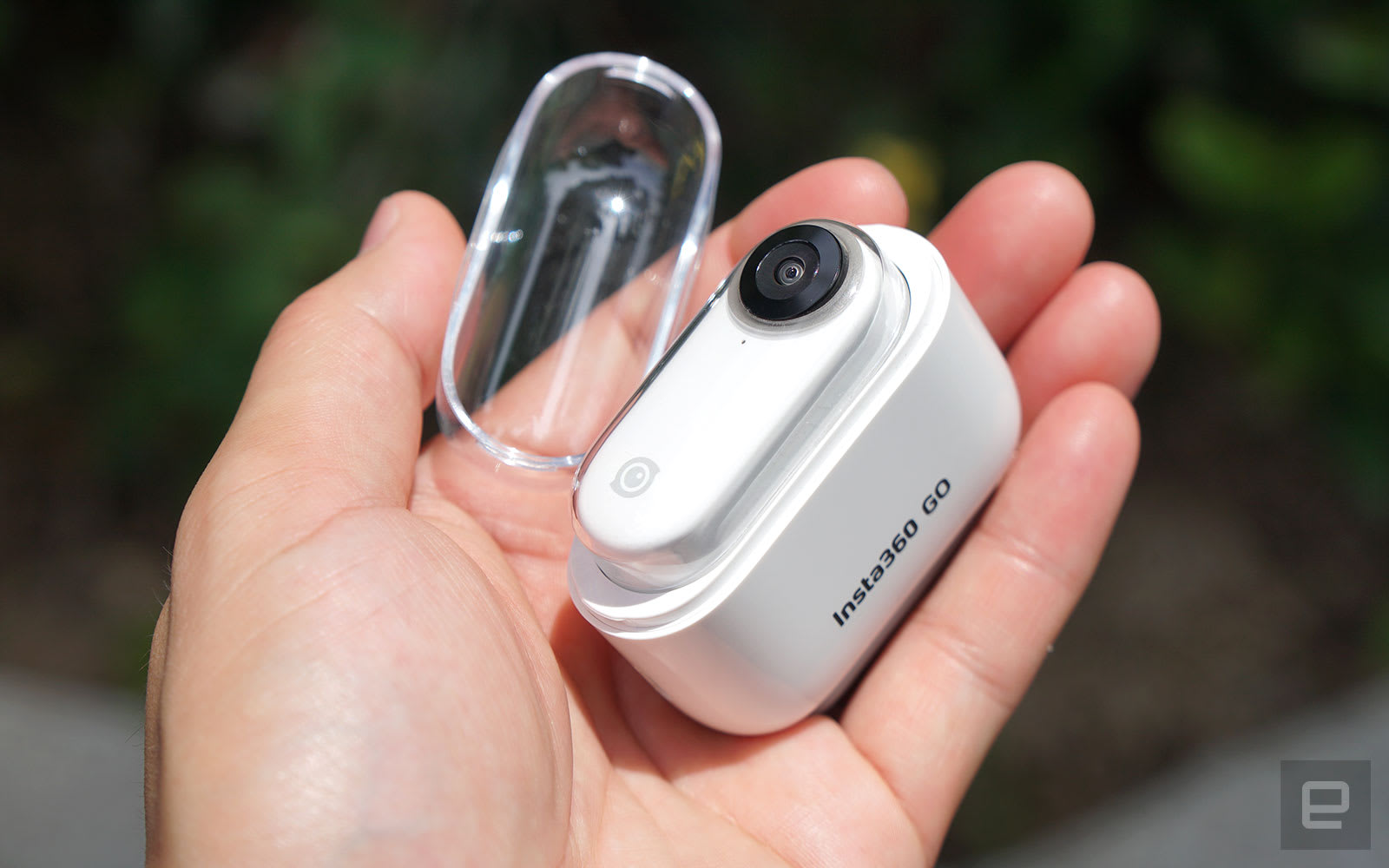 The Go's hyperlapse mode is a little more battery friendly. While each recording session is limited to 30 minutes for a 5-minute output, the remaining battery power can eke out an extra 8-minute hyperlapse session (and only taking up about 2.7GB in total). Similarly, timelapse mode can record up to 8 hours, which outputs a 9-second clip.

I spent some time with a near-final Go over the last few days, and it's certainly a fun product to play with. While earlier lifelog cameras already offered a handy wearable experience, none of them are as compact as the Go, nor did they offer these kinds of advanced video modes. More importantly, I'd rather be wearing a device which I have total control over, as opposed to having, say, a Google Clips camera constantly looking out for things to film. 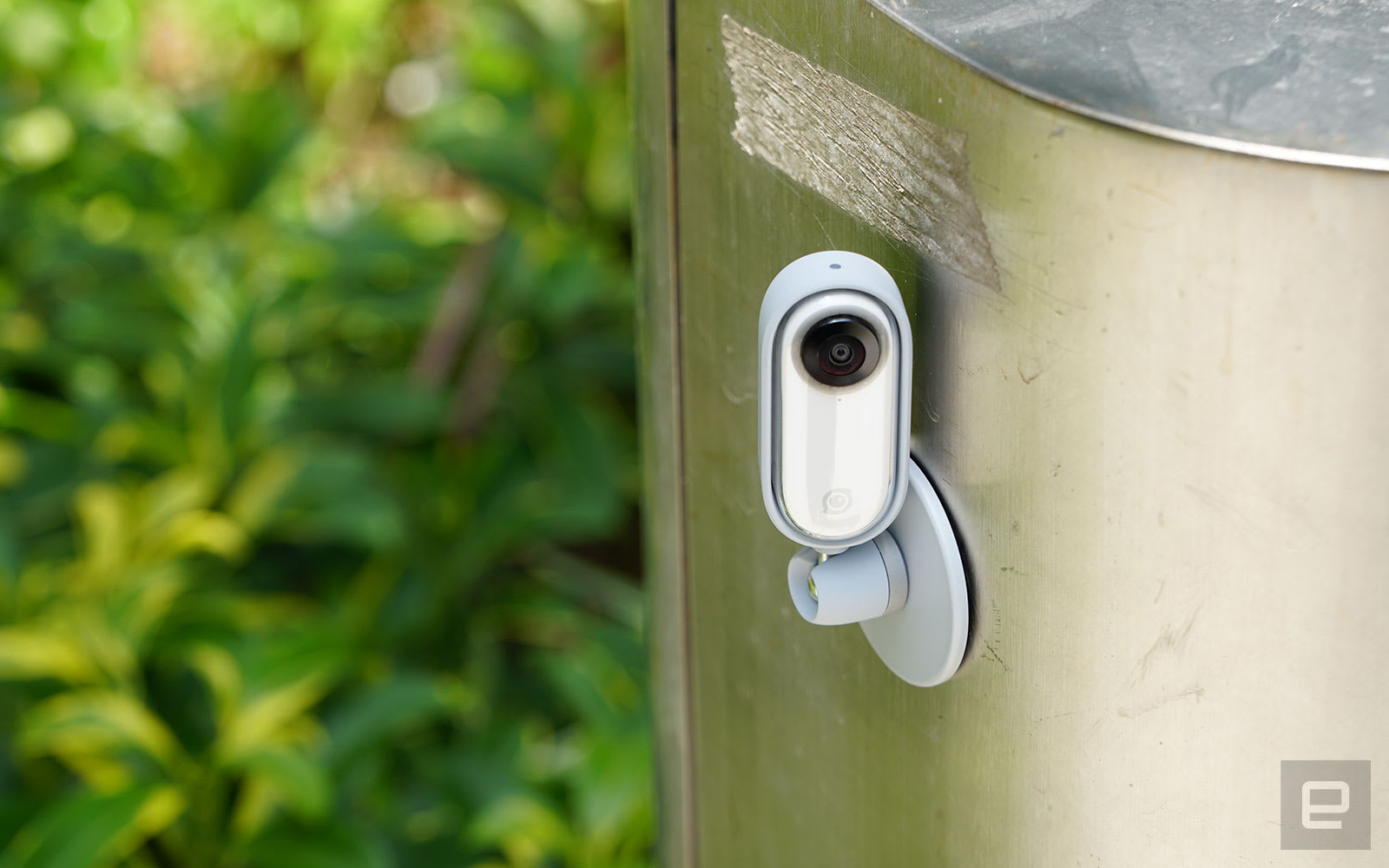 Insta360's killer proposition might be those accessories, which also allowed me to film from the perspective of various objects, like a bowl of rice, or a bottle of water. I've also had the camera mounted on top of my car, on my selfie stick, inside my fridge and even inside my dishwasher. I'm sure other users will have more daring ideas.

The Go's tiny battery isn't as big of an issue as I expected, and that's because I would typically put the camera back into the charging case, anyway. The 8GB limit wasn't too painful either, though it'd be nice to have maybe twice as much storage, so that I can save most of the offloading work for when I'm done shooting for the day.

Video quality is also pretty good for a camera of this size, and like recent Insta360 cameras, the FlowState stabilization here works like a charm so long as there's ample light. For instance, the night shot of me walking down a city street looks great, but places like our office pantry and lift lobby make grainy and slightly shaky clips (there's a "remove grain" option if you want to try and suppress noise in such clips). 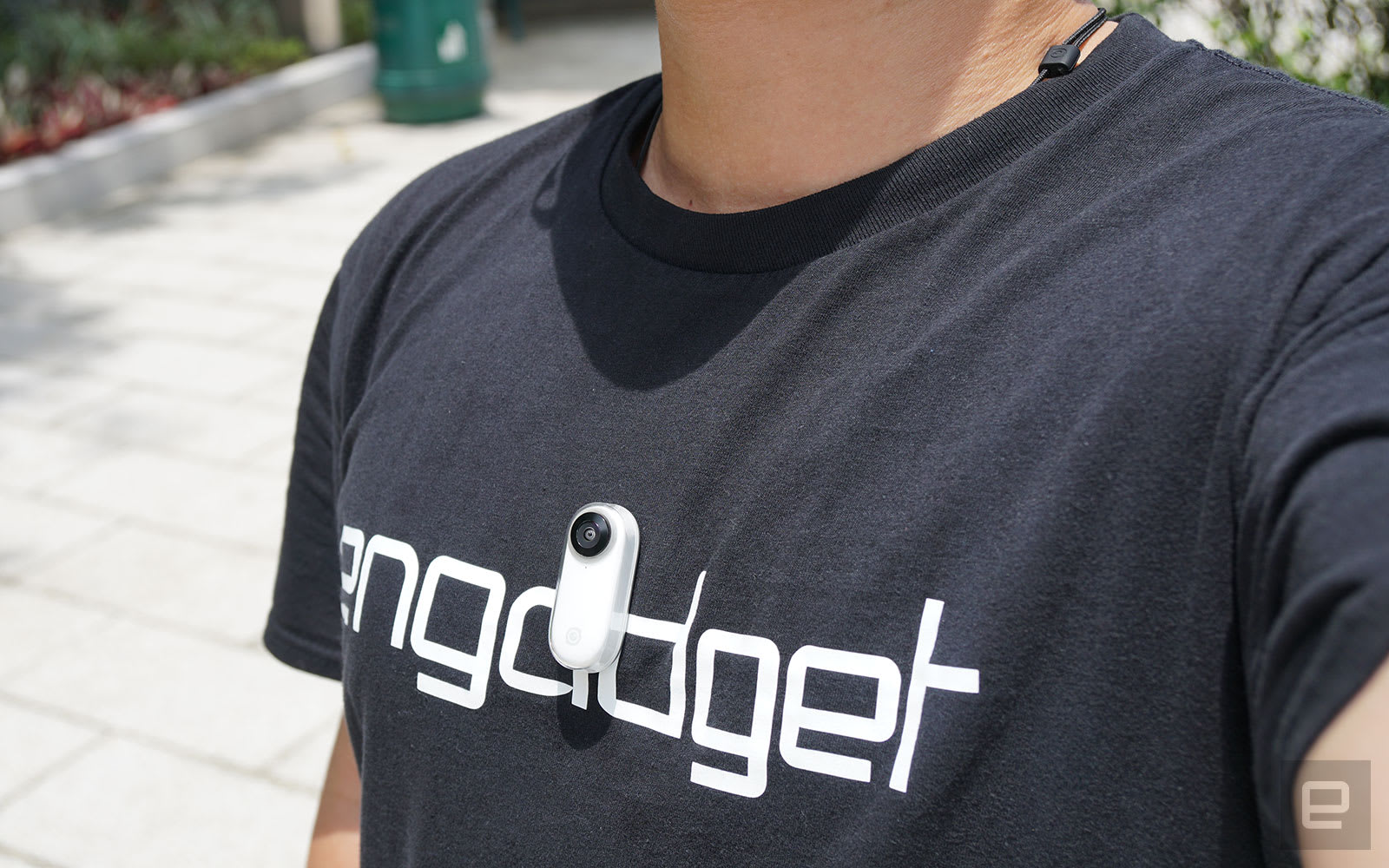 Even as someone who's familiar with Insta360's devices, I'm still surprised by the versatility and convenience with this tiny camera. It's fun, it's practical, and it makes nice videos. Of course, there are other options if you want better picture quality, but for this form factor, it's probably the best option you have right now. Compared to the $249 Google Clips, the Go's $200 price tag seems reasonable too with all its bundled accessories. The kit is available starting today, and you can add laser engraving if you order directly from the official online store.