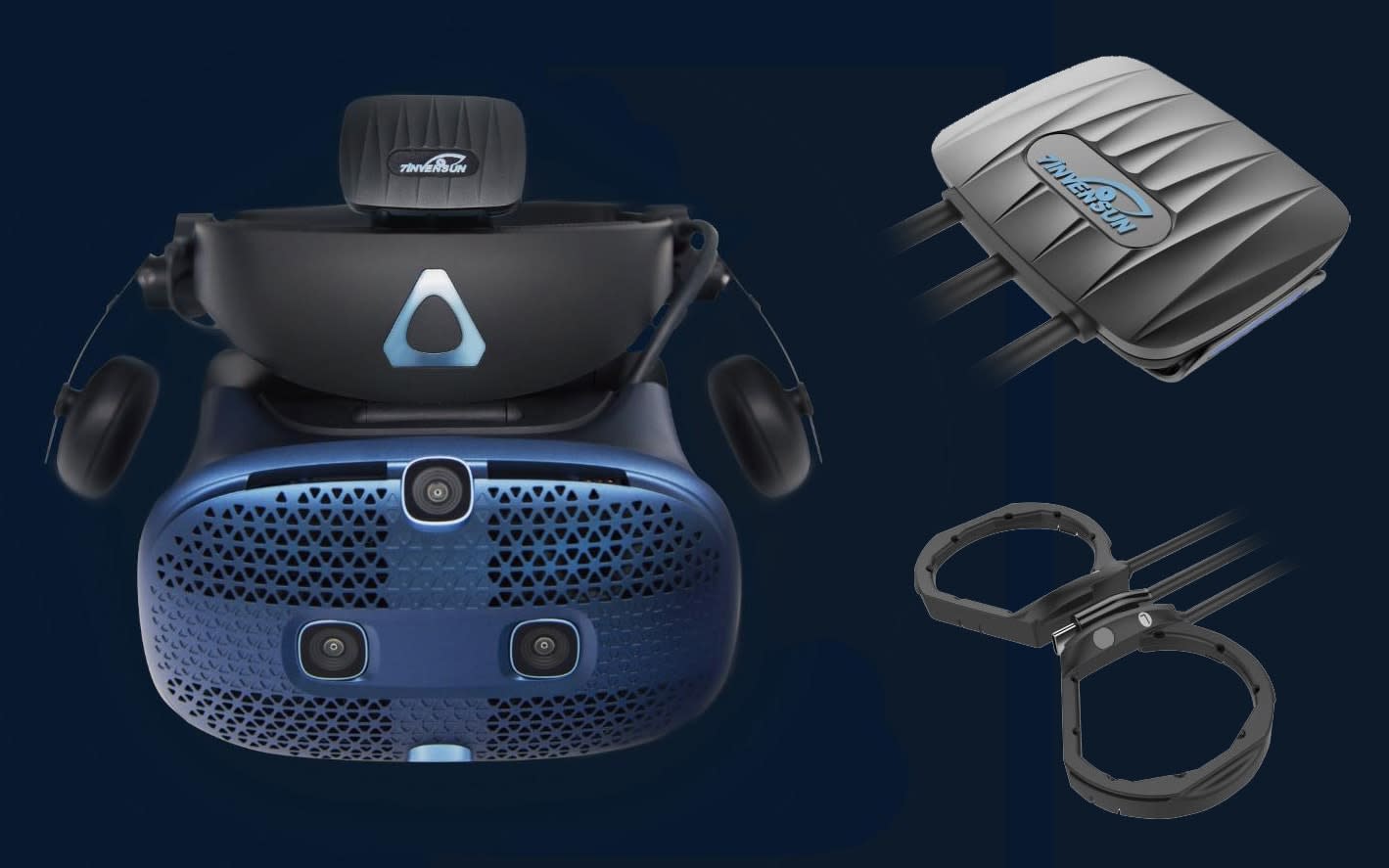 VR companies have been hyping up eye tracking for years, yet even today, options are limited when it comes to VR headsets with integrated eye-tracking -- namely the HTC Vive Pro Eye we first saw back at CES. Thankfully, a Chinese company dubbed 7invensun is soon offering a $149 upgrade kit that will let existing HTC headsets gain the same feature. Not bad considering the Vive Pro Eye costs $1,599. Pre-orders will commence in mid-November, followed by shipment in December.

Since our first encounter back in 2017, 7invensun received funding from HTC's Vive X accelerator and eventually delivered its third-generation eye-tracking add-on, the Droolon F1. This is apparently more compact and easier to install than the earlier versions, and it runs off a USB cable that you plug into the headset -- be it a Vive Cosmos, Vive Focus Plus, Vive Focus or the original Vive aka Vive CE. This kit tracks your eyes at 120Hz, though it can be customized to go up to 240Hz.

Most importantly, unlike 7invensun's earlier trackers, the Droolon F1 is made specifically with HTC's Vive Sense SDK in mind. This means apps that are already compatible with the Vive Pro Eye's eye-tracking feature (powered by Tobii) should work with the Droolon F1 as well. Likewise, developers who want to take advantage of this new hardware should be able to easily add eye-tracking features to their apps using this SDK.

With eye tracking added, developers can choose to enable foveated rendering, which focuses GPU resources on the areas that you're actually looking at, leaving the rest blurry -- just like your own eyesight. In other words, you get a much sharper view in general, while the downgraded picture quality around it is barely noticeable.

In supported apps, users can also use their gaze to interact with menus and objects, which is useful in situations where controllers are not suitable for use. It's also possible to map your eye expressions -- be it blinking, squinting, winking or even rolling -- to your avatar on VR social platforms.

Developers have the added benefit of tracking users' eyesight in the virtual world. As we saw at the first Vive Pro Eye demo, an app called Ovation took advantage of this property for public-speaking training, whereas product showcase apps can generate a heat map to show which features got the most attention.

Interestingly, 7invensun's latest eye tracker has one clear advantage over Tobii's solution: Iris identification. This opens up a whole new door to instantaneous login and potentially payment processes in VR.

While it's clear that 7invensun's latest accessory is still targeting enterprise users, here's hoping that this will encourage more developers and users to adopt eye tracking, and possibly discover new use cases as well. Only then will headset manufacturers include such technology as a standard feature moving forward.

Congrats to #ViveX Company @7invensun for announcing their #VR #EyeTracking accessory for the @htcvive #ViveCosmos and #ViveFocusPlus! 👀👍 Eye Tracking will soon be a standard function for VR devices! pic.twitter.com/RIbfR3Scdb

In this article: 7invensun, cosmos, droolon, droolon f1, eye tracking, eyetracking, gear, htc, vive, vive ce, vive cosmos, vive focus, vive focus plus, vr, wearables
All products recommended by Engadget are selected by our editorial team, independent of our parent company. Some of our stories include affiliate links. If you buy something through one of these links, we may earn an affiliate commission.