This probably isn't shocking to anyone who knows me, but I love sneakers perhaps too much for my own good. So when Nike introduced the Adapt BB with power laces earlier this year, I was pretty intrigued: It brought two of my favorite worlds together, sneakers and technology. But for me, the problem with the Adapt BBs is that they're designed to be a performance basketball shoe, meaning they're bulky and not something I could wear every day. Now Nike has created the Adapt Huarache, a reimagined version of a classic lifestyle sneaker from 1991, which also features its FitAdapt self-lacing technology.

Look, if I had my pick of self-lacing shoes to own, it would be the 2016 Nike Mags -- you know, the ones from Back to the Future. But those were limited edition, and Nike only made 89 pairs total (and I'm not about to drop $75,000 to buy them on a resale app). The Adapt BB and Adapt Huarache cost $350 each, which is much less than the $720 HyperAdapt 1.0, Nike's first consumer self-lacing sneakers. Even $350 is a steep price to pay for kicks, but since Nike can't keep the Adapt BB or Adapt Huarache in stock, clearly sneakerheads aren't fazed.

We'll see if Puma has the same luck with its Fit Intelligence self-lacing shoes, which are expected to arrive in spring 2020 for $330. 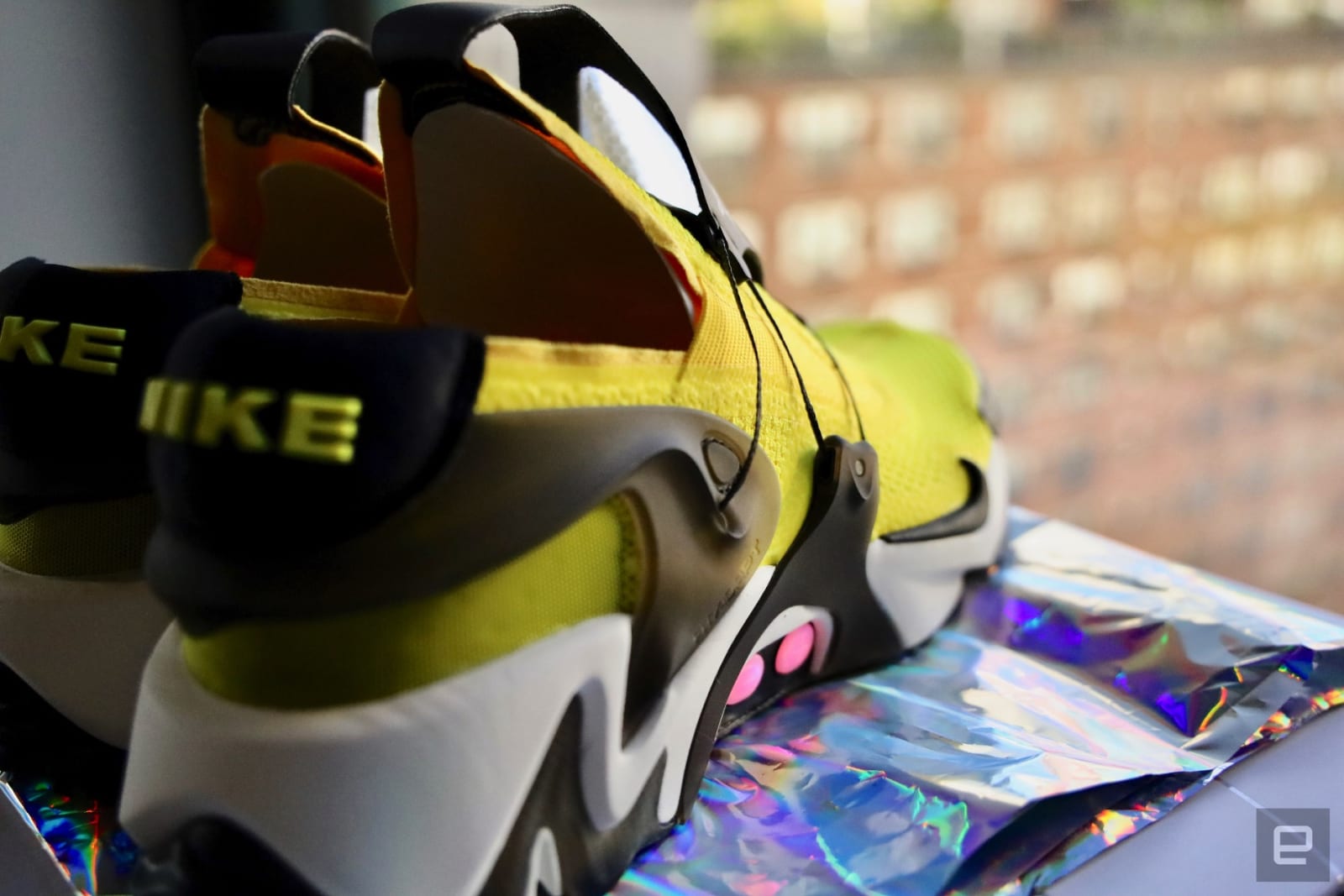 Similar to the Adapt BBs, the auto-lacing Huaraches can be controlled with an iOS or Android app. That said, if you want the most futuristic experience out of them, you'll need an Apple device. I, for one, have Adapt Huaraches paired to my iPhone 11 Pro Max (terrible name, by the way, Apple), which lets me use voice commands to control my sneakers. With Siri Shortcuts, you can quickly adjust the laces or check the battery, all simply with your voice. You can have up to five different commands in the Nike Adapt app. They let you tell Siri to do things like "loosen my sneakers," "check my sneaker batteries" or "switch my sneaker lights."

Additionally, if you have an Apple Watch, you can tighten or loosen the fit right from your wrist -- in case you don't want to use one of the two physical LED buttons on the shoes. Along with the Siri integration, that makes the Adapt Huaraches immediately feel like something out of a sci-fi film. It's not every day that I can get ready for work, put my shoes on and right before I walk out the door, say, "Hey Siri, lace up my sneakers." 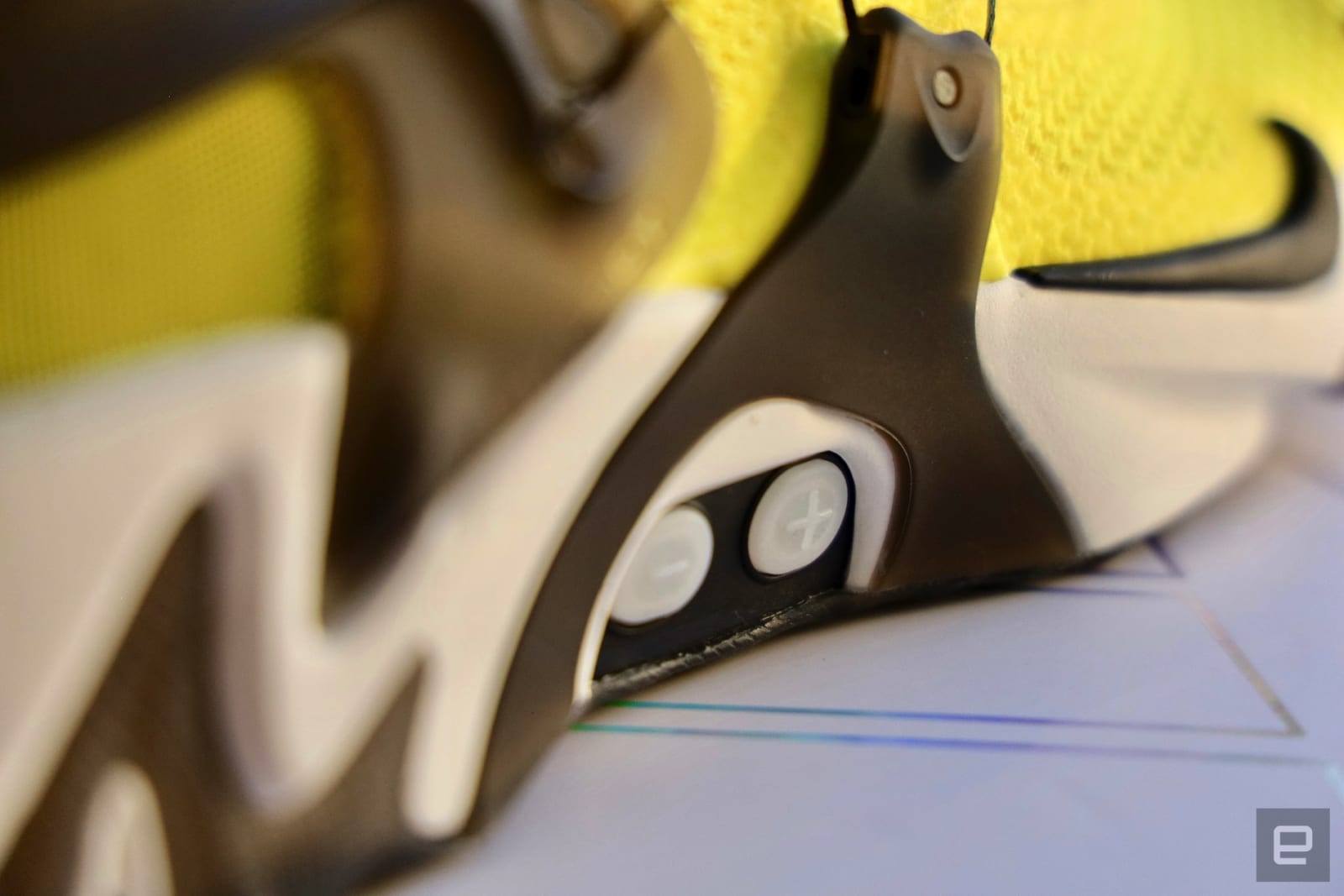 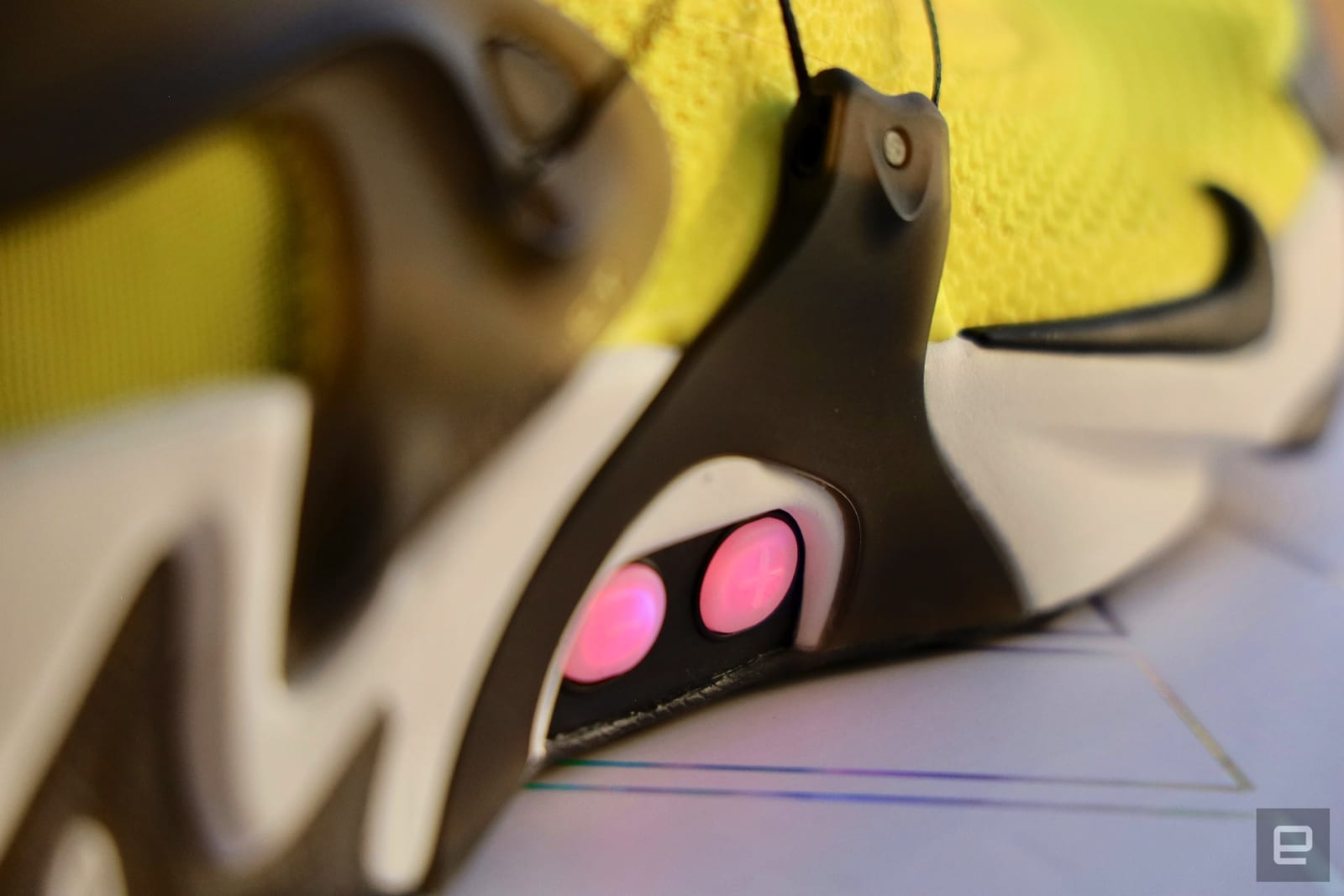 Even without voice commands (which weren't available when Nike launched the Adapt BB in January), you can use the Adapt app to adjust the fit of the left or right shoe, change the color of the LED lights and update the software on your Huaraches. I only used the app when I wanted to change the LED colors on my sneakers though, which was usually just so I could show people what they can do. The reason I don't have to use the app too often is that once you put the Adapts on, they can sense your feet and adjust the power laces to be the best possible fit for each foot. And if you need to tweak the fit slightly, you can do so via the app or buttons on the shoes.

Nike says the battery life lasts 14 days on a charge, after which you simply rest the shoes on the included Qi wireless-charging mat to get more power in them. As I mentioned earlier, if you want to keep tabs on the battery life on your Huaraches, you can use the Adapt app or ask Siri if you're using an Apple device. One of my main concerns with the Adapt BB and Adapt Huarache was that they'd be too heavy because of the tech inside, but the latter in particular don't feel any different than, say, the retro Nike Air Jordans I wear.

Now, here's the thing I do get asked anytime these self-lacing sneakers come up: "Are people so lazy they can't tie their own shoes?" While that's certainly a good point, I don't consider Nike's FitAdapt technology a complete gimmick. The company may not be marketing it as such, but this tech can be particularly useful for people with disabilities and limited motor skills. That's why features like voice commands are so useful. Again, Nike isn't calling the Adapt Huarache or Adapt BB accessibility products, but it's easy to see their potential.

I do hope these Adapt models come down in price in the near future, because $350 is still a lot of money to spend on a pair of sneakers. But if you're like me and want a shoe that looks good, is comfortable and has power laces, it's hard to ignore the Adapt Huarache (especially in that wild, bright yellow color). Just be ready for your friends, family and random people to swarm around you with questions anytime they see those LED lights shining on them. I usually entertain them by telling Siri to "unlace my sneakers," which starts blowing people's minds as soon as they hear that satisfying self-lacing sound.

Like Marty McFly once said in Back to the Future Part II, "Power laces, all right!"